Many many moons ago, I bought a pair of flip-flop sandals at (no kidding) the grocery store. Yes, it was an impulse buy… no worse than my usual grocery-store impulse buy of a jumbo bag of Cheetos. But I disdain shoes so I was looking for a snappy alternative that would allow me to quickly and easily put them on or take them off, depending on whether I was meeting the President or just going to work.

Anyway, for the grand total of about four bucks I got a pair of sandals that looked remarkably like eighty-dollar Birkenstocks. I wore them for years (and yes, many people commented about my Birks) until finally the soles had been worn to a nub.

Then I bought another pair. This time it was the Super Target, and the price had skyrocketed to $4.49. They weren’t quite as nice, but again I wore them for years until the air-cushion pockmarks in the bottom of the shoes were visible through the worn-away soles.

A third pair entered the scene, this time from Wal-Mart. Inflation continued to rear its ugly head; these were $4.99. And they sucked. A lot. I wore them for a single day and the leather that crossed over the tops of my feet rubbed the skin so raw that I noticed at the end of the day they were actually stained with blood. And my left foot, to this day, has a scar from that day.

So I went back to pair number two– the one in the best shape– and continued wearing them. A little hot glue sufficed to keep the dilapidated soles from completely falling off, and I know Laralee cringed every time I wore them. But darn it, they were comfortable and I was sure not about to rub my feet raw with my new ones.

But all good things must come to an end (twice, in this case) and the pair finally became pretty much unwearable. Laralee told me I should just invest the money in a pair of real Birks, which would probably last a long time. I insisted that a four-dollar pair of shoes is plenty good for me. So this afternoon I performed a little sole surgery. I carefully cut the soles off the new (scar-inducing) sandals using a kitchen knife (I doubt Birks are made of cork and rubber like this, so such a trick wouldn’t have worked).

Then I peeled off the nub of a sole remaining on my original pair of sandals and hot-glued the new soles on the old shoes. Voila, pair number one was resurrected! As comfortable as ever (everyone loves a good old broken-in pair of shoes, right?) and a brand-new set of soles.

I figure I’ve got another two or three years before I have to part with another hard-earned fiver.

Today it was sunny, sixty degrees, and all the snow has finally melted. A perfect day for a bit of February ultimate. I went out during lunch and played a good five-on-five game with the usual gang, realizing about two minutes into it how out of shape the winter has made me. Boy, there’s nothing like running around for an hour to remind you that you have to work up to that level, not take a few months off and jump into it like it’s nothing.

Of course, it probably doesn’t help that I just turned 32. I wonder when you realize you’re no longer young and spry? Sometime in the late twenties, when you can’t stay up until two in the morning with no ill effects or hop into a game of ultimate after months of flab production.

On the bright side, by the time the league season rolls around, I should be ready for it.

We went to visit our friend Vickie yesterday, and it’s a good half-hour drive each way. There are, of course, quite a few stoplights betwixt here and there, and Alex and Kyra derive great fun from using their astounding mental abilities to control the lights.

Basically, they sit in the back seat and chant in order to make the lights green and allow us to avoid stopping all the time. So every time we approach a light, we hear two voices behind us:

The worst part is probably when we were going down Highway 287, which has long stretches without stoplights but since it’s flat and straight, you can see the light far ahead. Thus the kids could see it a good minute or so before we actually arrived at the intersection, and we were treated to a lengthy display of mental prowess:

Thank goodness they were on the alert, or we might still be sitting at red lights.

So it looks like the music industry will be (finally) mailing out checks to anyone who was part of the class-action lawsuit against them regarding price-fixing of CD’s.

The checks will all be for $13.86, and I’m sure I’ll be going to the mailbox several times a day to grab it when it shows. Interestingly enough, I doubt $13.86 is enough money to buy a single decent CD…

For my birthday I received what could only be described as a unique gift. It’s a “binary clock” that shows the time with LEDs arranged in columns of binary numbers. One reads the six columns from left to right to produce the digits in the hour, minute, and second.

The little instruction manual claims that “with a few minutes of practice” you can read the binary clock as well as a standard one. Laralee and I plugged it in and stared at it for a few minutes, mesmerized by the changing lights, but I can’t honestly say we came away from the exercise with the ability to tell time in binary.

We did, however, discuss what time it would be when the most LEDs were on. We couldn’t figure out when that would happen, although it’s clear that seven is an important component of that time since it requires three LEDs. There were also discussions of what times would produce interesting patterns like pyramids or checkerboards.

Definitely a clock for geeks. 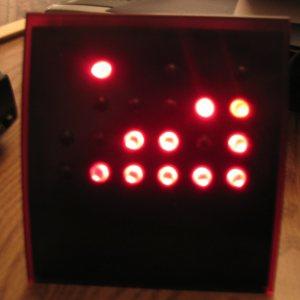 Kyra got a haircut, and she thinks she looks terribly cute with the new style. 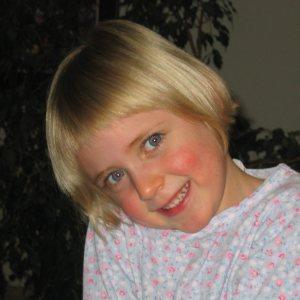 “So, if I just hit this deletey thing, it’ll all go away, right?” 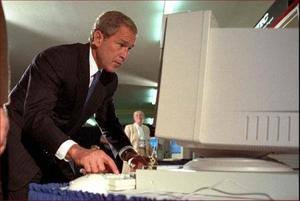 Many news sources are reporting today about the paper released by a group of sixty scientists (twenty of whom have a Nobel Prize in their living room) condemning the Bush administration’s treatment of scientific research.

Specifically, they claim the administration has “deliberately and systematically distorted scientific fact in the service of policy goals” with regard to research on the environment, medicine, nuclear weaponry, and so on. They further contend that reports unfavorable to the administration policies were censored or discarded, that advisory committees were loaded with unqualified political appointees, and that the administration refused to seek independent confirmation of reports in line with their agenda.

Personally this comes as no great surprise, and only sharpens my feeling that Bush and his cronies are the worst thing this country needs right now. Of course other administrations have done similar things– suppressing information that happens to be contradictory to their policies or direction. But according to this report, our current administration has gone far beyond the “usual” levels and continues to subvert scientific progress when it feels threatened.

It’s already clear the administration distorted intelligence reports regarding Iraq in order to accomplish its agenda, so in a way this seems like “par for the course”… if it doesn’t agree with you, shut it down. When you’re at the top of the government totem pole, you have the power to do exactly that.

Where does it end? Is there no limit to the authority of Bush and his cronies? Can they hide, doctor, or otherwise discard anything that stands in their way?

Happy birthday to me! 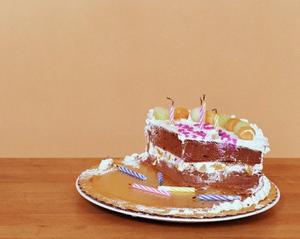 Follow-up to the Poser Question:

Chancellor the Wise has pointed out to me that cylindrical tanker cars have more structural strength than rectangular boxcar shapes. I suppose efficiency of structure is more important than efficiency of volume, at least in this case…