So I sent an e-mail to my friend Shane, and I received this bounce message:

Wow, a GMail account that’s “over quota”? I thought you got something like 1.5 gigabytes of mail storage with GMail… he must get some serious e-mail traffic!

You can’t argue with the math.

It was nine months ago, more or less, that Colorado got slammed with the first of its weekly blizzards. Last winter we had snow on the ground for sixty-plus days straight, with more each weekend.

And now the babies are showing up. Hospitals in the Denver area are reporting a 20% surge in births this month, and expecting more next month (nine months after cabin fever really set in).

It is with deep regret* that I read about the resignation of Attorney General Alberto Gonzales this morning. 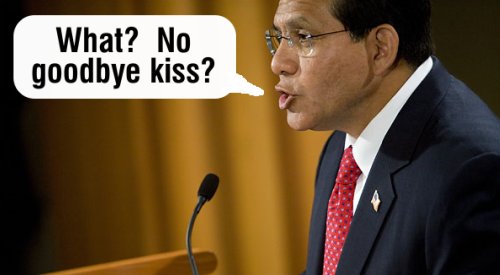 * Just kidding. It was a great day. Long ago I thought John Ashcroft was the worst AG this country could have, but ol’ Alberto proved me wrong. Good riddance.

I was downstairs in my office today, working on some accounting stuff (whee!) and I glanced out the window at our neighbors’ yard. There, waving gently in the breeze and backlit by a brilliant blue sky, was a sunflower.

I grabbed my camera, went outside, and took the shot: 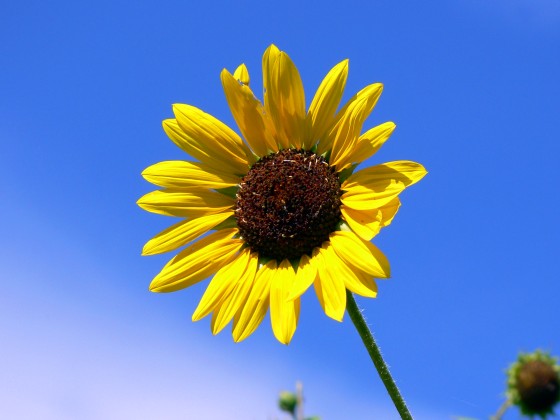 Not too bad! One of these days I might actually become a decent photographer…

Remember back in the 80’s, when hair was big and girls wore leg-warmers and Nancy Reagan “just said no”? As I can remember, that’s about when our country embarked on the long and perilous journey called The War on Drugs.

It is almost (but not quite) as meaningless and silly as The War on Terror, since you can’t really fight a “war” if you don’t have an “enemy”. Drugs are a product, and since they’re always in the underground markets (like the terrorists, hmm?) you can’t go around shooting them or whatever.

But no matter. Our government, along with the United Nations and several other brave countries, declared The War on Drugs and promised that in 20 years, worldwide illicit drug use would be all but eradicated. At the very least, it would be in a steep and steady decline.

Here we are, roughly 20 years later. How’s The War going? Here’s a nice summary from a New York Times article on the opium production of Afghanistan:

Afghanistan produced record levels of opium in 2007 for the second straight year, led by a staggering 45 percent increase in the Taliban stronghold of Helmand Province.

Poppy prices that are 10 times higher than those for wheat have so warped the local economy that some farmhands refused to take jobs harvesting legal crops this year, local farmers said. And farmers dismiss the threat of eradication, arguing that so many local officials are involved in the poppy trade that a significant clearing of crops will never be done.

Whee! It sounds like things are going swimmingly. Not only is drug use not in decline, it’s pretty much been climbing steadily for these past two decades. The $600 million (yes, million) we pump into Afghanistan alone to control the drug trade seems to be so ineffective that one wonders exactly what that money is supposed to do. Never mind the tens of billions of dollars we’ve spent in other countries– and within our own country, of course– to little or no effect.

When, oh when, will these smooth-talking Congresspeople realize that you can’t throw a bunch of money and resources at a problem that’s not tangible? Like The War on Terror, this is a fight we can never, ever win.

From an AP article today:

Corruption has long plagued Iraq reconstruction. Hundreds of projects may never be finished, including repairs to the country’s oil pipelines and electricity system. Congress gave more than $30 billion to rebuild Iraq, and at least $8.8 billion of it has disappeared, according to a government reconstruction audit.

How do I get in on this fabulous reconstruction gravy train?

“I may not have gone where I intended to go, but I think I have ended up where I needed to be.”

I really like the transparent console windows I run on my desktop, especially when they’re combined with interesting background images. Here’s an example of a spiffy background I snagged on Flickr. 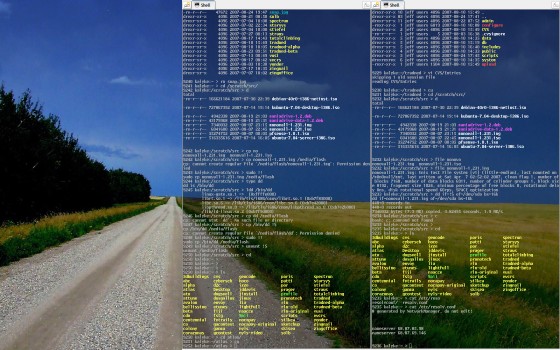 Hah! Some farmers in rural Massachusetts did a little creative mowing a few months ago, a satellite captured the field on one of its mapping passes, and now anyone can read their message by poking around Google Maps and looking at the satellite imagery. 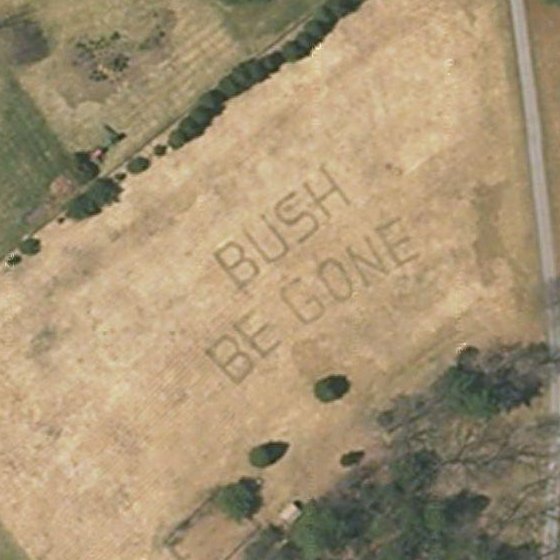 Yesterday the Baltimore Orioles were playing the Texas Rangers and pulled ahead in the first few innings to lead 3-0.

The Rangers decided to turn up the heat or something, because starting in the fourth inning they exploded– eventually scoring a total of 30 (yes, 30) runs. The rout included a grand slam by Travis Metcalf, who had been called up from triple-A ball that very day (that’s got to make you feel good when you finally make it to The Show).

Despite such a performance, Texas remains in last place.