During our visit to Utah last weekend, I asked my nephew (who’s a big board gamer) what the best board game of all time is. Without hesitation, he said “Terra Mystica”. He explained that it’s pretty complicated, but once you learn to play, it’s fantastic. When we came home, I burned a couple of Amazon gift cards to buy it, and Zaque and I gave it a whirl this afternoon. 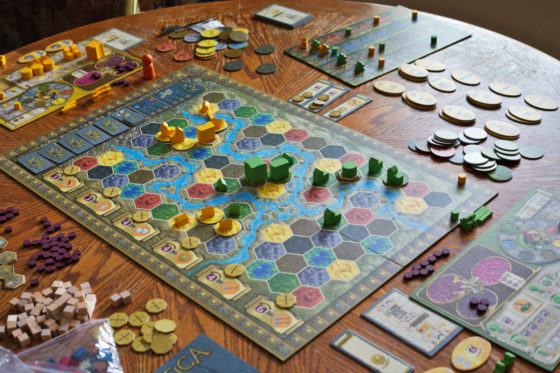 The box weighed several pounds, and it took us fifteen minutes just to set up the board. Then we spent about an hour reading the rules. 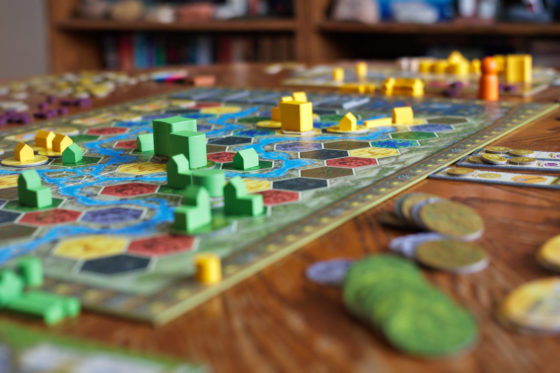 Due to a Dungeons and Dragons engagement, Zaque couldn’t stay for the end of the game, but we’ll wrap it up tomorrow. So far I can say it’s interesting, and indeed, once we learn how to play I suspect it’ll be a pretty good challenge. But the verdict is still out whether it’s the best board game of all time…

Today Laralee sat down across the table from me with her lunch. 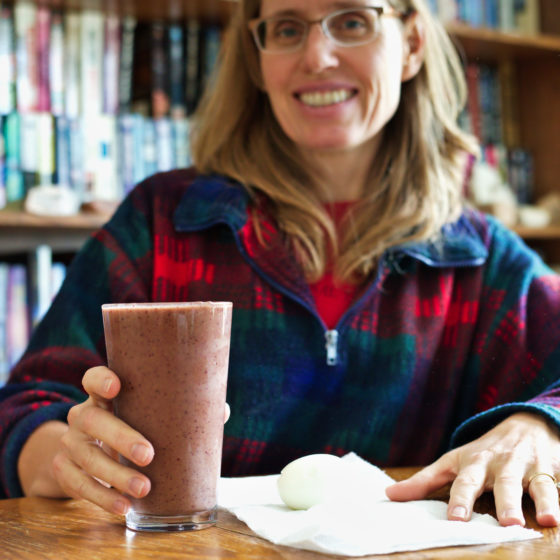 It consisted of a hard-boiled egg (barely visible against the napkin) and a smoothie of unknown composition. I think it had banana in it, but like most of the smoothies she makes, the rest of it could be pretty much anything, including things like spinach. Yeek!

Zaque hasn’t had a haircut in about six months now, and it’s still going strong. Unlike any of the rest of us, his hair is really curly when it gets long. 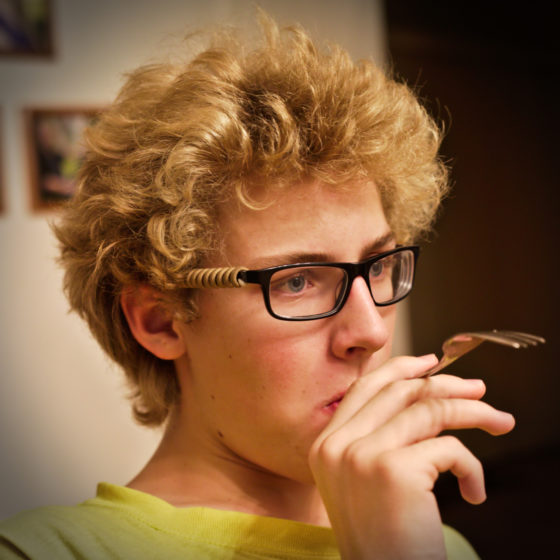 I’m not sure how much longer his hair is going to get (I don’t think he knows, either) but it’s fun to see. He tells us he does it so he doesn’t attract too many ladies, but I’m pretty sure he secretly loves the attention he gets from those same ladies. They think it’s cool.

A couple of weeks ago I headed up to Washington for a “trial run” of Thom’s new business. He and Katie have created a company called Ascend Leadership, with a unique approach to teaching and training up-and-coming leaders. There are a gazillion companies who provide management training to CEO’s, middle managers, team leads, and so on. Most of them use traditional teaching methods like meeting at a local hotel conference room and paging through dry Powerpoint presentations. While I’m sure there’s some value to that, and perhaps middle managers feel very comfortable with a nice Powerpoint in front of them, Ascend takes participants out into the wilderness for an intensive multi-day experience. Their target is specifically “emerging leaders”, who are people identified by their peers (or managers) and about to step into a management role for the first time. It’s been a few decades since I was in that situation, but looking back I think it would’ve been a tremendous help if I’d received some kind of training. I was literally just told one day that I’d be leading my team at work, and was expected to somehow know exactly how to do that.

Because Ascend is just getting started, Thom decided to host a “pilot program” where he invited a few friends to go through the program as if they were participating as emerging leaders. It was a great move, giving him an opportunity to test things he’d been thinking about and receive feedback about whether the approach was useful and valuable. So, I flew into Seattle and hopped into his car with a few strangers. We drove out to the wilderness, hiked up to our campground, and started the program.

We camped beside a small but pretty lake. 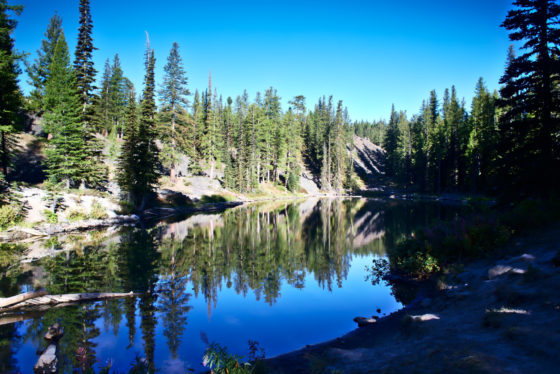 Each day included many “sessions”, where we talked about different aspects of leadership. Thom did an incredible job facilitating the discussion, making sure we were covering the material he’d prepared while leaving the group a lot of latitude in where we took the conversation. It was especially cool to be sitting outside, up in the mountains, without the distractions of emails to answer or phone calls to take. 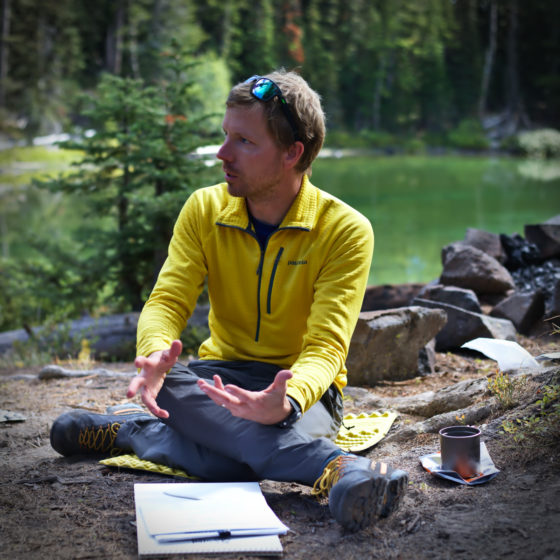 Honestly, one of the best parts of the experience for me was meeting these three other amazing guys. One is Thom’s wife’s brother Ry, which means he’s my sister-in-law’s brother (my brother-in-law-in-law?). 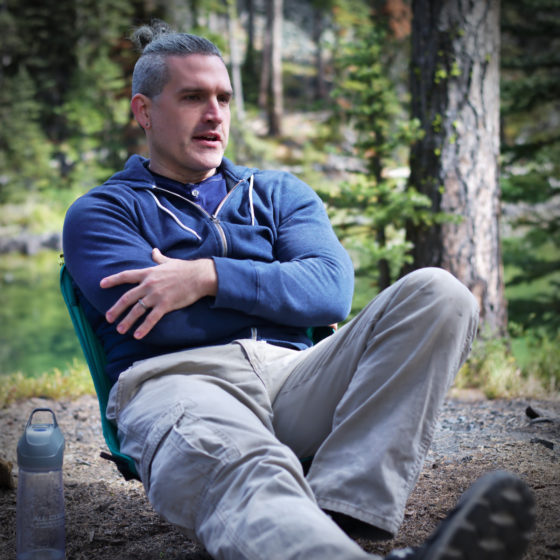 William is a longtime friend of Thom’s from REI. 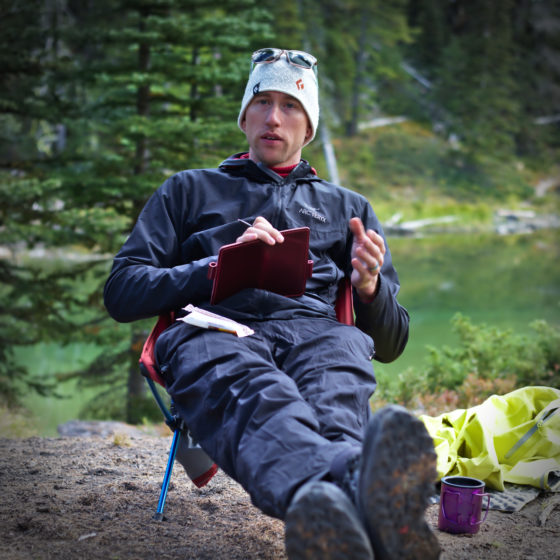 And Michael just met Thom a few months before but was intrigued by his business idea. 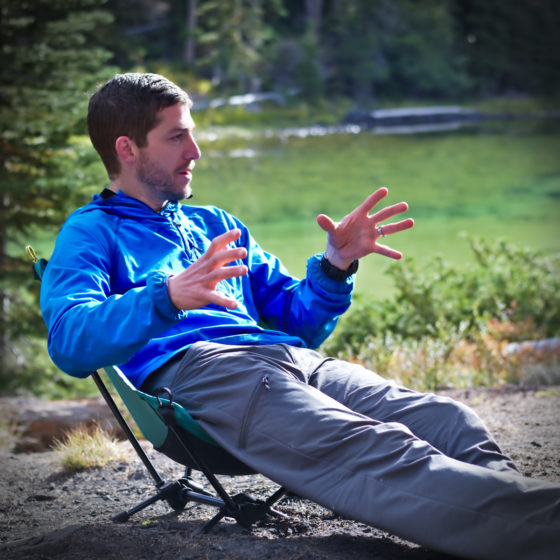 These guys were fantastic. From the first moment we met and rode for a few hours in Thom’s car, to the time we said our goodbyes five days later, I felt like our conversations flowed easily, and we had a ton of stuff to talk about. Since we were isolated in the backcountry together for several days, we were able to get to know each other really well. Some of our conversations were deeply personal, and I think it really added to the experience. I learned a lot from them.

You’ll notice all of us were wearing long sleeves in those photos; in fact, we spent most of our time bundled up in several layers including fleece and down parkas. It was cold! I don’t think the temperature topped the mid-50’s, and it was often cloudy, so we all joked about how unseasonably cold it was for early September. But we were all experienced backpackers and had the right gear, so despite some complaints we were fine.

Other than the cold, the weather was great and I managed to capture a nice sunset: 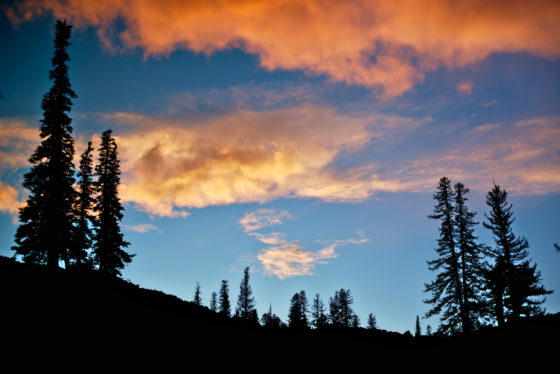 I also tried my hand at some night photography, but had limited success. It’s surprisingly difficult to capture stars well. 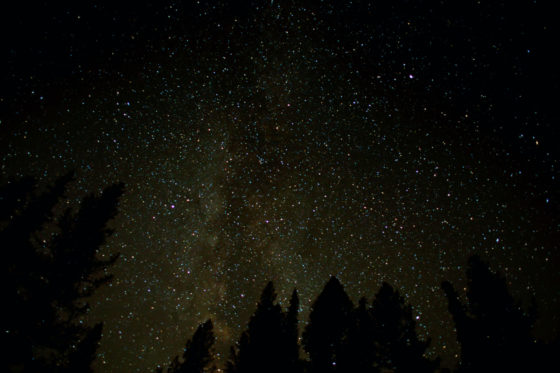 In the end, I really like Thom’s idea of doing this in the wilderness, not only because it’s a place where the usual distractions of work don’t interfere, but because there’s something healthy and refreshing about being outside. Give me a vista of trees and lakes and mountains and fluffy clouds in a blue sky, and I’m a happy guy. 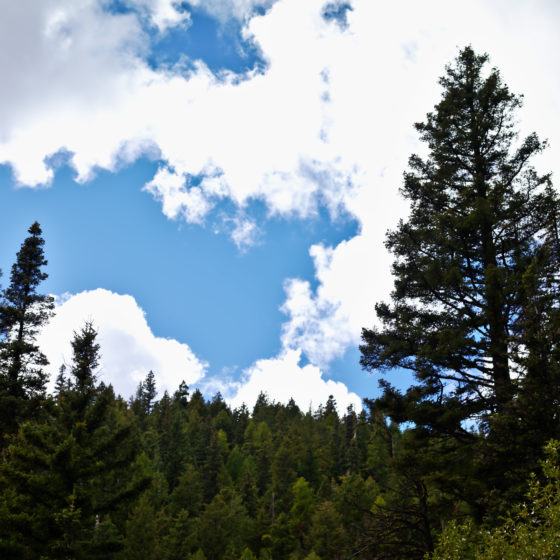 I’m excited to see what happens with Ascend, and honored to have met some great new friends.

From this weekend’s trip to Utah… 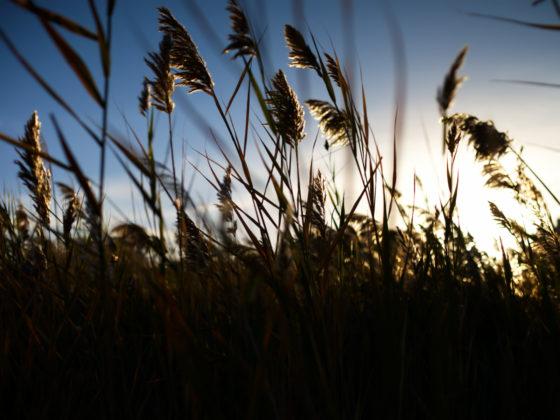 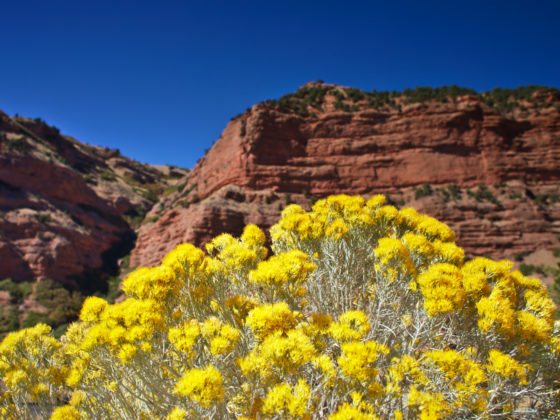 Except at a funeral.

With a day off work, I wanted to climb a Fourteener, but the weather isn’t cooperating– it’s drizzling and snowing in the mountains today. So I’m at home, thinking of how to spend my time. Laralee’s been outpacing me on our quest to de-clutter, and I figured this would be an opportunity to get rid of some things.

I started by scanning a bunch of old yearbooks, learning in the process that it’s surprisingly difficult to disassemble a bound book and scan the pages. It turned up some crazy pictures from high school and junior high, and I had a good chuckle at several of them.

Then I turned my attention to my box of trophies. Yep, I still have a ribbon for a story I wrote when I was 8, and the trophy from my one and only year of swim team… 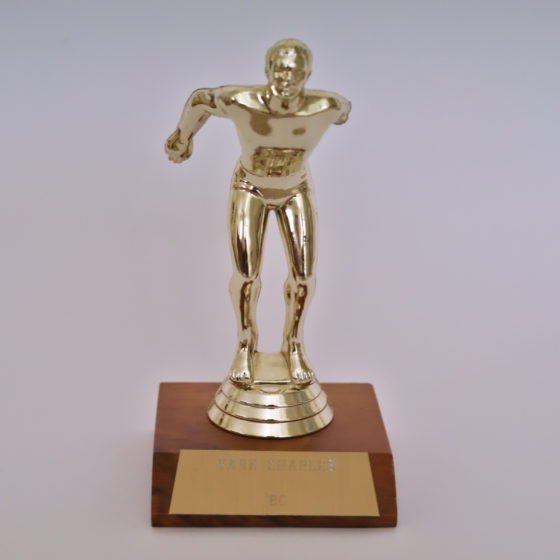 I suppose it’s sort of apropos that the guy’s arm is broken off; that year I broke my collarbone and couldn’t actually participate in a single swim meet. But at the end of the season, everyone got a trophy, including the kid in an arm sling who didn’t swim.

There were a handful of trophies and medals from my high school days on the speech and debate team. Oratory, Lincoln-Douglas debate, humorous interpretation (my signature event), and so on. I’d forgotten about my acting awards as well. During my senior year I not only won the Best Actor award, but the coveted Imagination and Knowledge award. 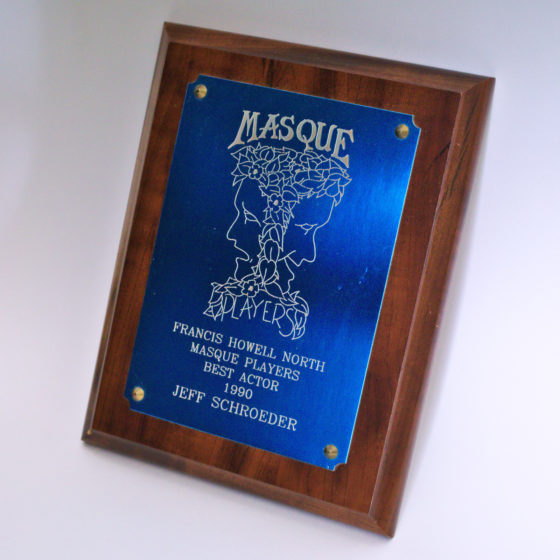 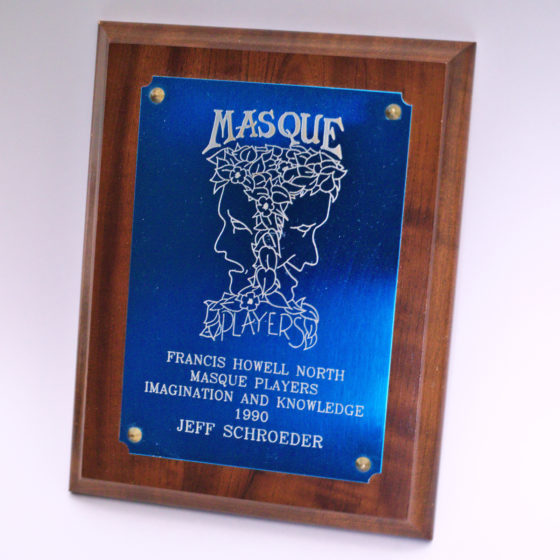 Apparently in high school I was pretty good at science and math, because I had a whole pile of medals for various state- and national-level competitions. Here’s one for language arts, two for mathematics, and six for the Science Olympiad– including first place in the nation (I didn’t miss any questions on the test). Pretty cool! 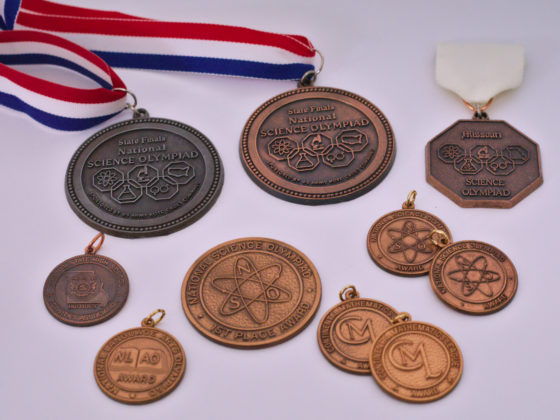 I guess when you get to college, you don’t get medals and plaques any more, because the only one I found was this plaque from the university for my four years (technically five) of involvement in all aspects of Residential Life. Those were some of the best times at college: I learned a ton and met lifelong friends. 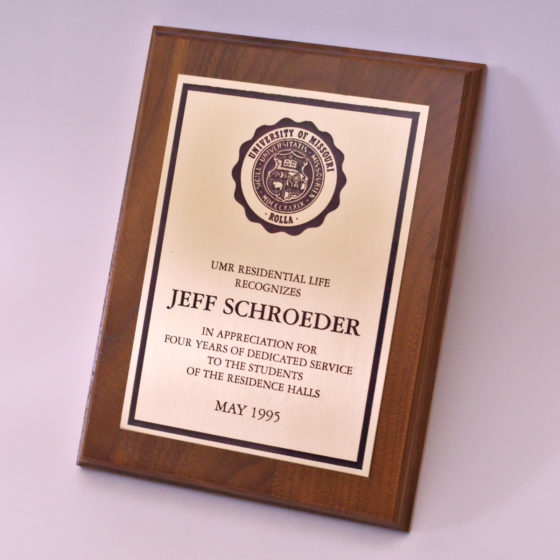 So now what? Well, in the spirit of clearing out our house, all of these are heading to the trash. On the one hand, it’s kind of sad to toss them out, but on the other, they’ve been sitting in a cardboard box gathering dust and cobwebs for a few decades now. It’s not like they’ll suddenly find a spot on our bookshelves. Imagine people coming to visit and admiring the ribbon from my fourth-place finish in the junior high Turkey Trot back in 1985!