It’s child’s play to mock Bush’s complete lack of public speaking skills– he’s made so many inane gaffes in his various off-the-cuff speeches it makes one think no one could be such a poor wordsmith.

One would be wrong. Sarah Palin may be more vacuous and a worse speaker even than Bush. Take this transcript as an example, from her recent appearance on CBS with Katie Couric:

Katie Couric: You’ve cited Alaska’s proximity to Russia as part of your foreign policy experience. What did you mean by that?

Sarah Palin: That Alaska has a very narrow maritime border between a foreign country, Russia, and, on our other side, the land-boundary that we have with Canada. It’s funny that a comment like that was kinda made to… I don’t know, you know… reporters.

Couric: Well, explain to me why that enhances your foreign-policy credentials.

Palin: Well, it certainly does, because our– our next-door neighbors are foreign countries, there in the state that I am the executive of. And there…

Couric: Have you ever been involved in any negotiations, for example, with the Russians?

Palin: We have trade missions back and forth, we do. It’s very important when you consider even national-security issues with Russia. As Putin rears his head and comes into the air space of the United States of America, where do they go? It’s Alaska. It’s just right over the border. It is from Alaska that we send those out to make sure that an eye is being kept on this very powerful nation, Russia, because they are right next to, they are right next to our state. 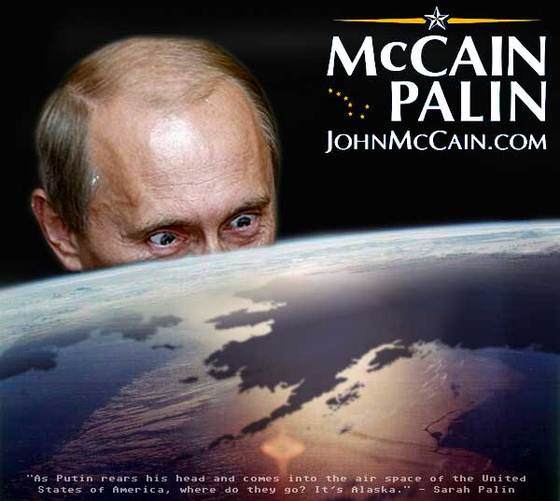 Look out! It’s Putin, rearing his head into the air space!

It’s good to know that– at least at some level– Congress still listens to the people who elected them.

From a New York Times article today about the stalled bailout negotiations:

It has become abundantly clear that members of Congress are hearing from their constituents, many of whom are furious about the proposed rescue.

I was one of those constituents– I wrote to my Senators and told them the bailout was a lousy deal. I received a nice boilerplate e-mail response (“Thanks for your concern… I take all of these e-mail messages very seriously… yada yada”). Although I’m sure they didn’t actually read my message, I hope the sheer volume of people like me gave them a clue that they’re treading in dangerous territory.

Woo hoo, here’s a fun e-mail from another satisfied customer. 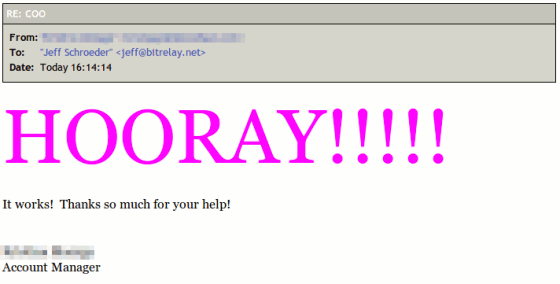 Whee, sign me up for a $17,000 bill to help the rich guys on Wall Street and the morons who picked up mortgages they couldn’t afford. 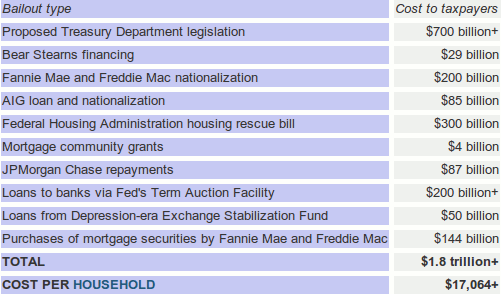 I’m not really sure what the heck they’re going to do with that… I mean, Digg is basically a web site with a database and a comment system where tens of thousands of people go to discuss interesting news items. The hosting and bandwidth bills are probably pretty steep, and of course you’d need a staff (half a dozen?) of server administrators, but beyond that it’s kind of nebulous what $28 million would do.

I guess I’ve been running on a shoestring budget far too long. I’m going to see if I can raise a few mil in venture capital to keep boomflag.com running.

Tom and I spent four days backpacking in the Wind River Range, part of the Teton mountains in northwest Wyoming. What a spectacular trip. 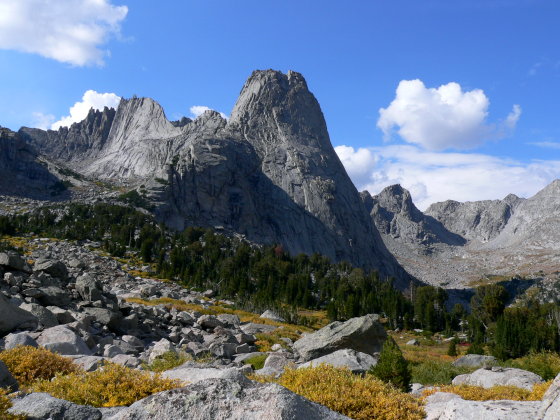 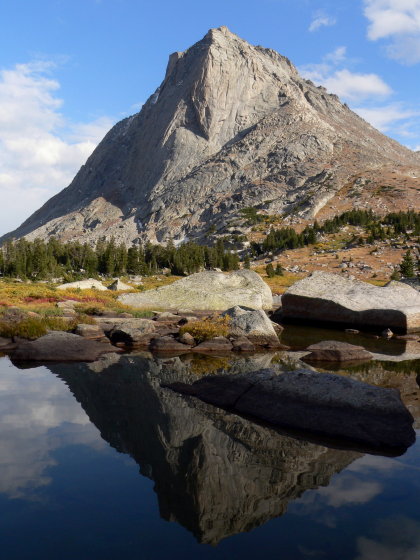 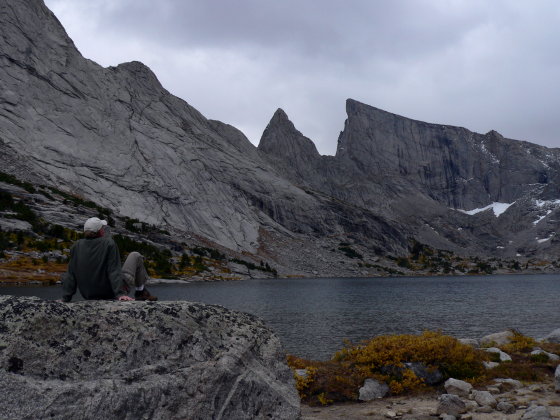 We had some interesting adventures involving blowing out a tire and almost getting stuck fifty miles from civilization in the sagebrush, pouring rain and lightning above treeline, and of course a night in the tent while the rain lashed at the fly and thunder boomed overhead. And by our calculations we hiked around 27 miles, both carrying 50-pound packs up steep grades and across boulder fields where the rocks were the size of cars.

A good time all around.

The Department of Homeland inSecurity has unveiled its shiny new terrorist screening system, which will scan people walking through the airport and identify those who appear to be suspicious. That’s right: it will analyze pulse rate, breathing, skin temperature, and even “fleeting facial gestures”. People who are flagged as suspicious will be pulled aside for “enhanced screening”. Hoo boy.

DHS is bragging about this system because in tests with 140 people, some of whom were told to “act suspicious”, it correctly identified 78% of them. 78%! And they act like it’s some kind of triumph that people who were intentionally acting suspicious were flagged as such. A trained police officer– or possibly even an untrained clown from the street– could probably have identified every one of them.

Leaving aside the horrendous implications of a system designed to basically analyze our thoughts and intents, the mind reels to consider how colossally ineffective this system will actually be. I think Cory Doctorow’s analysis of such a system (written prior to this announcement) sums it up quite nicely.

If you ever decide to do something as stupid as build an automatic terrorism detector, here’s a math lesson you need to learn first. It’s called “the paradox of the false positive,” and it’s a doozy.

One in a million people have Super-AIDS. One in a hundred people that you test will generate a “false positive”– the test will say he has Super-AIDS even though he doesn’t. That’s what “99 percent accurate” means: one percent wrong.

What’s one percent of one million?

Your 99 percent accurate test will perform with 99.99 percent inaccuracy.

That’s the paradox of the false positive. When you try to find something really rare, your test’s accuracy has to match the rarity of the thing you’re looking for. If you’re trying to point at a single pixel on your screen, a sharp pencil is a good pointer: the pencil-tip is a lot smaller (more accurate) than the pixels. But a pencil-tip is no good at pointing at a single atom in your screen. For that, you need a pointer– a test– that’s one atom wide or less at the tip.

This is the paradox of the false positive, and here’s how it applies to terrorism:

Terrorists are really rare. In a city of twenty million like New York, there might be one or two terrorists. Maybe ten of them at the outside. 10/20,000,000 = 0.00005 percent. One twenty-thousandth of a percent.

That’s pretty rare all right. Now, say you’ve got some software that can sift through all the bank-records, or toll-pass records, or public transit records, or phone-call records in the city and catch terrorists 99 percent of the time.

What this all means is that the Department of Homeland Security has set itself up to fail badly. They are trying to spot incredibly rare events– a person is a terrorist– with inaccurate systems.

I can hardly wait to go to the airport this Friday to fly to St. Louis.

An awesome time for ultimate. Game on.

Charles Gibson interviewed Sarah Palin on Good Morning America and her answers to some of his questions were astounding.

For example, take this exchange:

PALIN: We’ve got to keep an eye on Russia. You can actually see Russia from land here in Alaska.

GIBSON: What insight does that give you into what they’re doing inside Georgia?

PALIN: Well, I’m giving you that perspective of how small our world is and how important it is that we work with our allies to keep good relations with all of these countries, especially Russia.

Wow. Does she even know where Georgia is? Does she have any idea what’s been going on there for the past month? Her answer had absolutely zero content.

I’m not a foreign affairs expert, but even reading the occasional Yahoo News story gives me enough information to have an intelligent conversation about the situation. It sounds like our possible future vice president figures that since she can see the coastline from some point in her home state, she’ll be able to handle all of those silly men with their tanks and planes.

Hurricane Ike has been cruising toward the Texas coast for several days, and emergency planners issued mandatory evacuation orders for everyone living on Galveston Island, the low-lying area where Ike would hit first with full force. They used terms like “certain death” for those who refused to leave.

But, of course, people ignored them. Estimates currently say that upward of 100,000 people might still be in that area, and it’s likely many of them are dead. I’m all for free will and choosing for thyself, but sometimes you just have to see that your defiance of a hurricane the size of Texas isn’t really going to change the reality that it’s going to flatten your house and wash you away in a thirteen-foot wall of water.

Here’s a classic quote from a guy named Steven Rushing, who lives on Galveston Island:

My family is traumatized. I kept them here, promising them everything would be alright, but this is the real deal and I won’t stay no more.

I guess that’s the last time your family listens to your promises, Steven.

Worse than those who choose to foolishly “brave” the storm are those who stay and then, at the last minute, decide it’s not going to turn out so well and try to leave. They call– nay, demand– help from emergency personnel, and then we have noble police and firefighters who risk their own lives to save the dolts who refused to leave while the leaving was good.

I’m sympathetic to those who were hurt or killed in the storm, and clearly it’s a huge tragedy on many levels. But it’s hard for me to conjure up sympathy for the idiots who refuse to listen to the experts who are telling them it’s going to be a big deal.