“Right now we are borrowing huge amounts of money from China to buy huge amounts of oil from the most unstable region of the world, and to bring it here and burn it in ways that destroy the habitability of the planet. That’s nuts! We have to change every aspect of that.”

I just love how my music player, AmaroK, displays lyrics for almost any song I have. Finally I can answer those age-long questions about what the heck the words to such-and-such really are.

But every now and then, the mystery only deepens. Consider this verse from UB40’s cover of “Red Red Wine”:

Red red wine you make me feel so fine
Monkey pack him rizla on the sweet dep line
The line broke, the monkey get choke
Burn bad rizla pon him little rowing boat

Umm, what? Is this some crazy “Louie, Louie” sort of lyric game?

The Department of Homeland Insecurity would make me laugh almost daily if they weren’t so terribly awful it made me want to cry at the same time.

They’ve compiled a list of potential terrorist targets– over 77,000 in all– in order to more accurately assess how to spread funding and protect vital areas from the devastation of a terrorist attack. This translates roughly to “If you’re on the list, you get some cash.”

It’s important to note that none of the following fairly well-known landmarks made the list:

I suppose the Department has some inside tips saying that terrorists wouldn’t dream of attacking such high-profile, heavily populated places. Instead, the list does include these important locations:

I’d laugh, but these aren’t jokes. Can anyone seriously believe the government is able to protect us from terrorist attacks when it does things like this?

One of my clients has asked me to update a half-dozen different web sites– for their various brands– to provide a single “unified” mechanism for accepting comments and questions from their customers. They have a well-defined schedule describing when each of these changes should take place. In other words, on such-and-such a day I have to be prepared to “switch over” a particular web site to the new system, and then a few weeks later I’ll repeat the process with another one. Eventually, in September, all of their sites will be using the new system and the world will presumably be a better place.

So far, so good. I finished the first two sites, and was prepared to do the third in about two weeks. Today I received an e-mail from the client:

We went live with the site today, but it’s not working…

I responded and told him it’s not working because I haven’t set up the new programming for the site (since I didn’t expect it to be needed for at least another few weeks). His response is classic– truly a mind-bending peek into the way some businesses operate:

For a variety of reasons, we made a business decision and moved the start date up.  Sorry we didn’t communicate that to you.

Now, clients often change schedules and so forth… but when I’m the integral piece, and nothing works without my programming changes, it’s a little surprising they went ahead with a bunch of things and then, oops, “didn’t communicate that”.

I just read about an awesome car race called the Mongol Rally. It starts in London, England and ends in Ulaan Baator, Mongolia. The route isn’t pre-determined, the only cars allowed to enter must have engines less than one liter (scooters are also permitted), and there’s no timetable.

This year’s entrants include such awesome road warriors as: 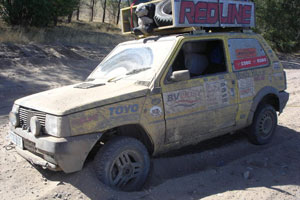 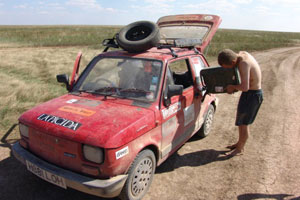 Apparently much of the fun is derived from the excitement of attempting to cross into (or out of) countries run by crazy despots. Cheating is allowed, and in general the whole point is to provide some adventure “in a world that’s become too small”.

Imagine crossing the Gobi Desert in a Ford Fiesta, or perhaps this: 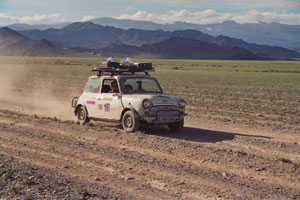 Heck, that might be a Fiesta! It’s hard to tell. And yes, one of this year’s Rally teams is actually driving a 1979 Ford Fiesta. Good luck to them!

Yes, indeed, there’s still fun in the world… I wonder if I could enter.

Oh, and every team is required to raise at least a thousand pounds (that’s British money, not something heavy) for charity. So it’s all for a good cause, as well as some good fun.

Here’s a good one.

We ordered pizza the other day for Kyra’s birthday, and had a coupon for a one-topping medium pizza for five bucks (limit three). Laralee placed the order: one medium pepperoni, one medium mushroom, one medium cheese.

I went to pick up the pizzas, showed them my coupon, and the total rang up to $18.50 or something. I made a comment that $3.50 was a lot of tax considering the order total was $15.00, and the woman seemed surprised.

Her: Well, the coupon is only good for one-topping pizzas.
Me: Yes. And I have three one-topping pizzas.
Her: No, this is just two.
Me: No, pepperoni is one topping; so is mushroom and so is cheese.
Her: Actually, cheese comes with the pizzas, so it doesn’t count as a topping.

Me: Can I get extra cheese? Would that count as a one-topping pizza?
Her: Absolutely.
Me: And then the pizza would cost five dollars, like the coupon says?
Her: Yes.
Me: Umm, okay, could you sprinkle on some extra cheese then?

So she did, and my total dropped to $14.30. I still couldn’t figure out the math (maybe the tax was negative?) but I’d saved four bucks by adding a topping, so I didn’t complain.

What an awesome song. I loved it twenty years ago, I love it now.

I was looking through some old image archives (long story) and found this one. 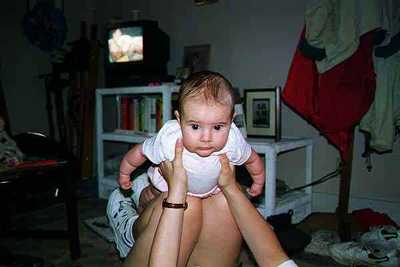 WHO THE HECK IS THAT? I’m sad to say I have no idea whose baby this is. I’m pretty sure it’s not one of mine, and I’m not getting any good clues from the room.

If you read this blog and this is your baby, please let me know. Then I can properly apologize for not recognizing her.

It’s a fact that the more complicated an envelope appears, the less valuable the contents will be. Here’s a great example from today’s mail: 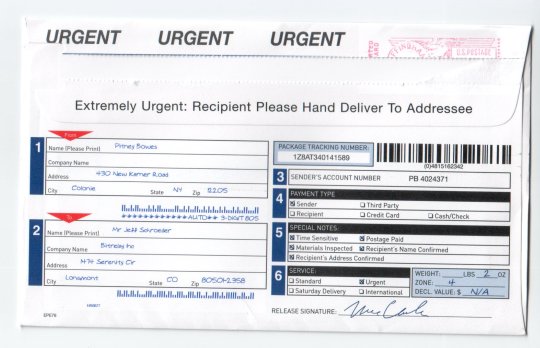 Yes, I can see that it’s URGENT URGENT URGENT and Extremely Urgent and has all sorts of technical garbage like “Time Sensitive” and “Materials Inspected” and (wait for it) “Urgent”. It also has that oh-so-realistic handwriting font so I’ll think it was specially made out just to me.

I must point out that it was definitely not hand-delivered to addressee. I suppose I’ll have to talk to the mailman (a way cool guy who wears khaki shorts, Hawaiian shirts, and Birks). Clearly he’s ignoring the clear instructions on the mail he’s delivering. Slacker.

In the end, of course, this was just a ten-page ad for a postal scale. Wow.

It’s no fun being old.

Last Wednesday in our league ultimate game, I tweaked my left calf. I’m not sure what I did– cut too hard, reversed direction too fast, whatever– but I was gimping a bit by the end of the game. Then I played two more games Thursday, and by Thursday night was really limping around. But Friday things seemed fine, and I figured it was just a temporary thing.

I played again today, and my calf is twinging. Dang. Tomorrow I’ve got a double-header, and then two more games on Thursday– I might be lucky to even be walking on Friday.

There was a time when stuff like this didn’t affect me at all. Now I’m feeling my age. And it’s not fun.