Sadly, after all these years our little Sony Cybershot digital camera has given up the ghost. I seems to work some of the time, but the photos end up looking a little strange: 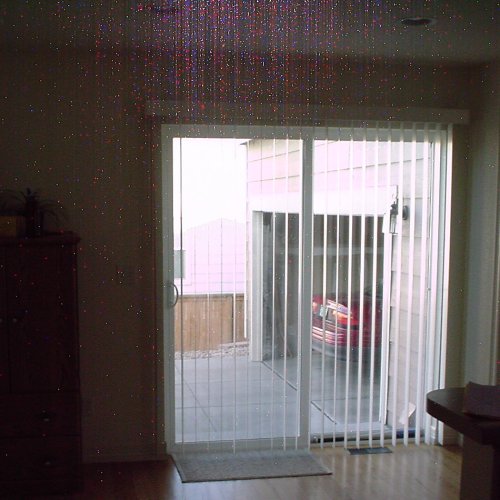 Sometimes we get really amazing noise: 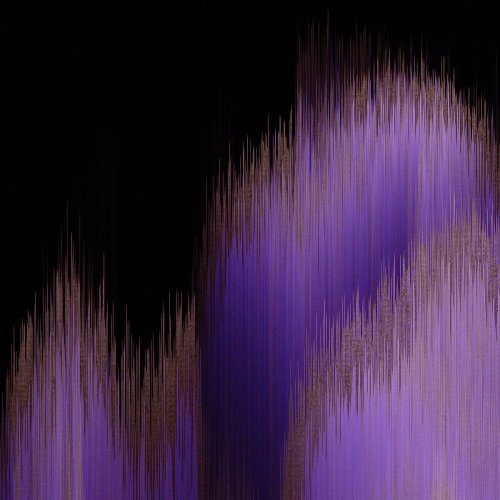 I guess you can’t go on vacation and come back with a hundred shots like that, so it’s time to retire this little guy.

According to the latest Harris poll, George has fallen to a new low:

How would you rate the job President Bush is doing?

Only 29% of the people are in the positive camp; a whopping 71% are negative about his job performance.

The real question, in my mind, is who on earth is in that 7% group who think he’s doing an “excellent” job? Wow.

Irony is so funny. 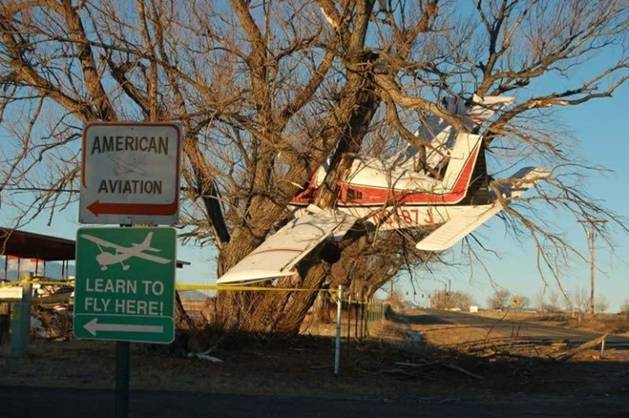 The photo of the day, shot during Attorney General Gonzales’ testimony before a Senate committee. 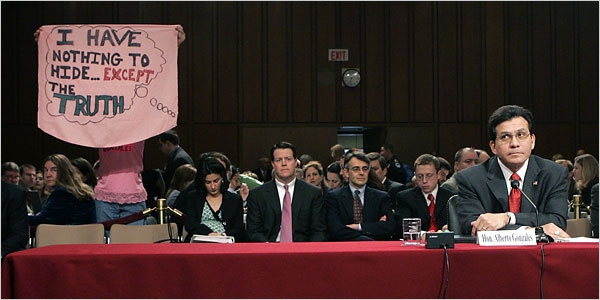 Yesterday I got after Kyra because she was cracking her (hard-boiled) egg by throwing it at the ceiling in the kitchen. A couple of hits on the ceiling took care of it, and then she could peel the egg. When I told her not to do that, her response was, “But mom does it!”

To that, I replied that apparently I needed to talk to mom, and possibly ground her for her bad behavior.

“But you can’t ground a mom,” protested Kyra.
“Why not?”
“Because moms have rights!”
“Really? Do kids have rights?”
“Not really.”

Then Zack joined in with, “Dads can do anything they want.”

Apparently that’s the real rub. Kids think their parents can do “anything they want” while they, of course, are stuck with far-too-early bedtimes and not enough play time and too many chores and on and on. My argument that I work eight to ten hours a day fell on deaf ears. In their perception, I have total freedom and they can’t wait until they become a mom or dad because then they’ll be able to eat all the candy they want and watch whatever movie they want and so forth.

And not get grounded.

Desre’e Watson is a six-year-old girl who attends kindergarten in Avon Park, Florida. Apparently she was throwing a bit of a tantrum in class, so the teacher tried to calm her down, and when it didn’t work (and mom couldn’t be reached) she did what any teacher in Avon Park, Florida would do.

She called the cops.

But that’s not the weird part. The cops showed up and also attempted to calm down Desre’e, but she would have nothing of it. So, they did what any cops in Avon Park, Florida would do.

They slapped handcuffs on her.

Then they put her in their patrol car.

Then they took her to jail and locked her up.

And then they charged her– a six-year-old girl— with a felony and two misdemeanors. 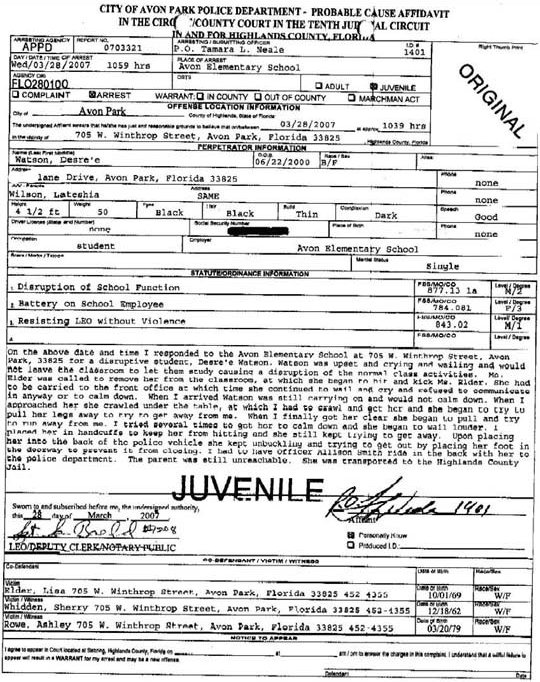 (Notice her weight, listed here at a staggering 50 pounds, and her height at 4 1/2 feet. I can see why two full-grown adult policemen would need to put her in cuffs, then the car, and finally the slammer. Sheesh.)

From an article on monkey business, in the Dominion Post:

In 2003 an experiment was started called The Monkey Shakespeare Simulator. The programme simulates a vast number of monkeys typing at random to see how long it will take them to produce a Shakespeare play.

Despite this, probabilists figure that, given enough time, it is not only probable but inevitable that the monkeys will write Shakespeare. They also argue that if the monkeys had started their project far enough back in time, they would have written the plays before Shakespeare himself.

Who says math is boring?

On April 16, 1953, President Dwight D. Eisenhower gave a speech which has been increasingly quoted recently– probably because it has become increasingly relevant when examining the affairs of our President and our government.

The way chosen by the United States was plainly marked by a few clear precepts, which govern its conduct in world affairs.

First: No people on earth can be held, as a people, to be enemy, for all humanity shares the common hunger for peace and fellowship and justice.

Second: No nation’s security and well-being can be lastingly achieved in isolation but only in effective cooperation with fellow-nations.

Third: Any nation’s right to form of government and an economic system of its own choosing is inalienable.

Fourth: Any nation’s attempt to dictate to other nations their form of government is indefensible.

And fifth: A nation’s hope of lasting peace cannot be firmly based upon any race in armaments but rather upon just relations and honest understanding with all other nations.

Pay particularly close attention to his third and fourth principles above. It seems we are clearly violating them– in the same way the Soviet Union did during the aftermath of World War II. We soundly condemned them for what they did in Eastern Europe, yet are we not doing the same thing in Iraq today? Oh, the hypocrisy.

Continuing to discuss the Cold War and the arms race, Eisenhower said:

The worst to be feared and the best to be expected can be simply stated.

The worst is atomic war.

The best would be this: a life of perpetual fear and tension; a burden of arms draining the wealth and the labor of all peoples; a wasting of strength that defies the American system or the Soviet system or any system to achieve true abundance and happiness for the peoples of this earth.

Every gun that is made, every warship launched, every rocket fired signifies, in the final sense, a theft from those who hunger and are not fed, those who are cold and are not clothed.

This world in arms is not spending money alone. It is spending the sweat of its laborers, the genius of its scientists, the hopes of its children.

The cost of one modern heavy bomber is this: a modern brick school in more than thirty cities.
It is two electric power plants, each serving a town of sixty thousand. It is two fine, fully equipped hospitals. It is some fifty miles of concrete highway.

This, I repeat, is the best way of life to be found on the road the world has been taking. But this is not a way of life at all, in any true sense. Under the cloud of threatening war, it is humanity hanging from a cross of iron.

These plain and cruel truths define the peril and point the hope that come with this spring of 1953.

“The greatest pleasure in life is doing what people say you cannot do.”

There are a lot of people who are having trouble paying their mortgages these days. These are people who, in the last few years, over-borrowed to buy bigger homes because interest rates were low. The so-called “sub-prime” mortgage lending business saw a huge boom as a result, and now that interest rates are climbing again, the people with adjustable rate mortgages or balloon ARMs or whatever other creative things were invented are suddenly in a world of financial trouble.

The answer? Naturally there are people in the government who want to bail out these people. They advocate paying money to help support those who can’t meet their mortgage, and also requiring banks and lenders to foot part of the bill. Here’s a quote from an AP article:

Consumer advocate groups say those loans, with steeply rising payments, were pushed on borrowers who didn’t understand the terms. Advocates say a government bailout, even a large one, is appropriate because regulators didn’t do enough to stop predatory lending, and because of the high cost of foreclosures.

So, just to be sure it’s clear what’s happening here, the government is using my tax dollars (and yours) to give money to people who made poor financial decisions. These borrowers “didn’t understand” what they were doing, and the lenders were “predatory” and evil by “pushing” their loans on people.

The last time I checked, no one is ever forced to get a mortgage and buy a house… especially one with bad terms, or a house that’s perhaps a bit too large or expensive for the income of the buyer. But forget logic and forget what’s fair– apparently people who are too dumb to read the terms of their mortgage deserve a government bailout. And the price tag for this is estimated to climb to $120 billion dollars or more. Ouch.

I think the most appropriate quote was from Michael Englund, an economist:

If the plan is to pay off loans when people quit, then I plan to quit paying my loan.

The financial irresponsibility of our government is staggering.