Last week I was released from my position as first counselor in our church congregation. I’d served there for almost five years, responsible for helping many of the people and organizations with various things. I worked side-by-side with the bishop, my good friend Matt, who always seemed far busier than me, and my other good friend Jason. Now that the three of us have been replaced by a new group, I have this strange feeling… what do I do with my Sundays?

It reminded me of Inigo at the end of The Princess Bride, when he mentions to Westley, “I’ve been in the revenge business so long, now that it’s over I don’t know what to do with the rest of my life.” 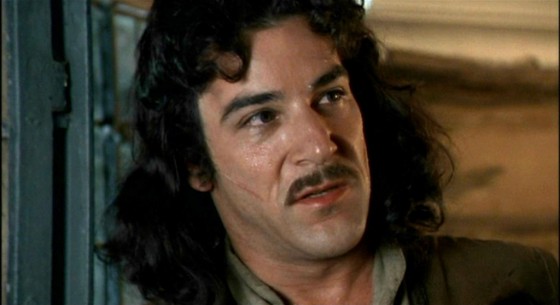 To which Westley replies, “Have you considered piracy? You’d make a wonderful Dread Pirate Roberts!”

I no longer have two hours of meetings before church, two hours after church, and several more hours of appointments and other service. Gone are the Sundays where I’d spend 10+ hours on church business, plus hours throughout the week meeting with people, hanging out at youth activities, going to camps, and whatnot. I’ve been in the bishopric so long, now that it’s over I don’t know what to do with the rest of my Sunday.

After about four years with a used HTC Sensation phone, I decided it was time for something new. Something that was fast. Something without a big permanently blacked-out spot on the screen. Something shiny.

So I bought a new Samsung Galaxy S4. Well, although it was technically new in the box, the S4 is several years out of date. I think Samsung is up to the S6 now, but I just can’t bring myself to spend $600 on a phone of any kind. The S4’s run around $200 now, which is much more palatable.

I unboxed it, fired it up, and started installing my usual suite of apps. Unlike many people, I don’t have a hundred apps… I use maybe a dozen regularly, with perhaps another dozen that I find I need occasionally. So it was a pretty quick process to get everything up and running, and even configure it much like my old phone (but faster and more shiny, of course).

It was then that I discovered the latest version of the Android OS doesn’t allow apps to write to an add-on SD card. I use my SD card to store things like books, music, and some other files. Well, no more. Everything has to go on the built-in storage, which rapidly fills up. I’m sure Google had a good security reason for doing this, but apparently a lot of people are unhappy about it. As I read various comments and rants from people, it became clear that the only way around these security measures is to hack (“root”) the phone. There are a few different approaches to this, but in the end the one I chose was to install a custom Android OS called Cyanogen.

The rooting process was actually pretty simple, and after maybe an hour of carefully reading instructions (doing it wrong will ruin the phone) and downloading the right things, I had Cyanogen up and running. Even better than my new ability to save whatever I want on the SD card was the fact that the phone no longer had a bunch of carrier bloatware installed on it. I swear, every cell phone provider has their own family of junk apps that you hate and you can’t uninstall. Well, no more. I had only bare-bones apps, and after installing the Google suite of tools (Maps, Gmail, Calendar, etc.) I was able to re-install my two dozen apps once more.

I found Cyanogen to be pretty sweet. It runs a little faster (less bloat, I suppose) and has a lot of customizations that you don’t get with stock Android. As one of those guys who usually goes to the “Advanced Settings” menu of any software, it was nice to be able to play around with things a bit more than usual.

So my new phone is pretty awesome now, and happily running all the stuff I need. 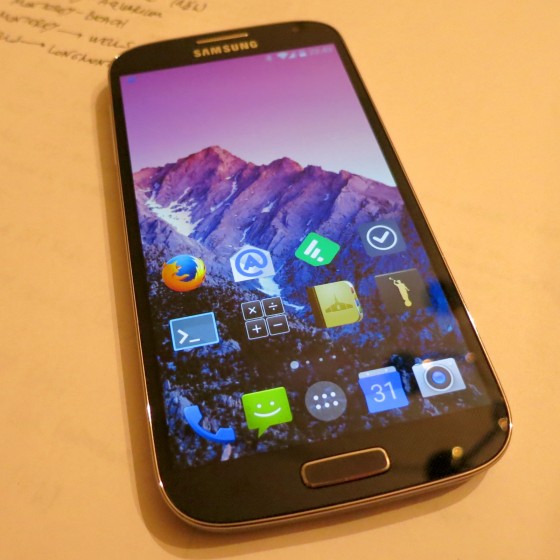 After using the phone for a day I decided to go ahead and root my Nexus 7 tablet as well. It went a little faster, since I knew what I was doing this time around, and within about 30 minutes I had Cyanogen plus my suite of apps on it. Woot!

Tonight I decided I was a bit peckish, so I whipped up a batch of baked chocolate pudding and made a nighttime snack of it. 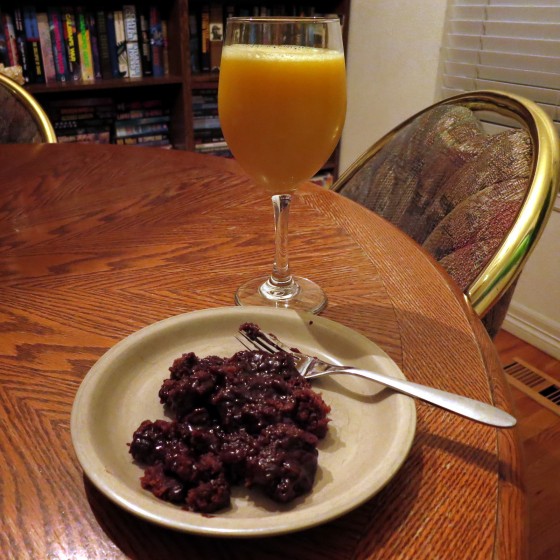 As I started checking out hotel prices in Monterey this afternoon, I noticed a strange thing: they were unbelievably expensive. The Red Roof Inn, for example, wanted $457 per night for a two-queen room! Even places like the Motel 6– where you’re lucky if the sheets are even fitted to the mattress– was asking $160 per night.

Sure, Monterey is a nice area, but I couldn’t believe the prices. Our stay at the MGM Grand in Las Vegas was going to be cheaper than the Super 8 in Monterey. But then I figured out that the week we’re planning to be out there is some huge collectible car show called the Concours d’Elegance. Apparently car enthusiasts from the world over converge on Monterey in early August and drool over each others’ wheels. If I was a car enthusiast I might have known that, I suppose.

Anyway, it turns out that hotels in that area literally triple their normal room rates for that week only. Sure enough, as I started adjusting dates on the various reservation tools, I saw the prices fall back to more “normal” rates. Hmm.

After talking to our friends, it became clear that we couldn’t shift the dates of our trip (long story) so instead we had to pick a different destination. We weren’t really all that picky in the first place; Monterey sounded cool and one of our goals for the trip was a beach. So after a bit of thought, we changed our itinerary to take us down to San Diego instead.

This new route shaved off a day of driving and almost 500 miles. And it still includes a beach.

It started out simply enough: we invited a couple of friends and their families to join us in Winter Park for a day of fun riding the alpine slide, playing miniature golf, and running the human maze. One of my friends suggested we get a cabin up in the area and stay the night, so I did some poking around and found a few cabins that seemed reasonable. Finding one big enough for fourteen people in all was a little tricky, but it seemed like we’d get a good deal. When our plans were set, I started making the reservations for the cabin. It turned out that one night wasn’t okay– everyone wants two or three nights at minimum. Okay, with a little more conversation amongst our group we decided to go up the night before. More fun together, right?

Then it turned out there was a cleaning fee. And a damage deposit. And taxes. By the time all was said and done, we were looking at about $800 per family for two nights in a cabin, a day at Winter Park, and a couple of restaurant meals. Whoa.

Jokingly, one of my friends suggested we just take a road trip to California instead. I had mentioned that a few weeks earlier– what if our three families trucked out to the beach for a few days? Well, given the expense of our Winter Park adventure, it seemed like we could take a road trip… for a little more cash and have a whole lot more fun.

Today we sat down and started planning. By the time we were finished with our itinerary, we’d mapped a route through Zion National Park, Las Vegas, north Los Angeles, Monterey, and some lonely towns in the desolation of central Nevada.

All told, we’re looking at 40 hours of driving across 10 days, covering at least 2,700 miles. We’ll see a bunch of awesome stuff, visit family in Utah, friends in California, and do it all in two vans (one of which is a rental). This is going to be epic.

Kyra turned 17 this week– wow. Yesterday she had a little birthday party for her closest friends. In addition to watching The Princess Bride and eating pizza, it involved some kind of card game that included a lot of slapping each other and screaming. 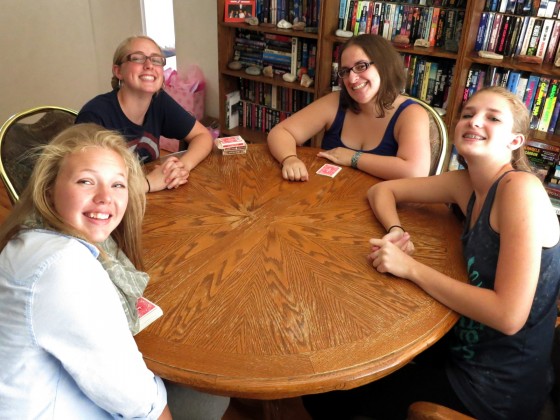 Yeah, it’s really something to have four teenage girls yelling for an hour.

Then today, to finish celebrating her birthday, she had all four of her wisdom teeth pulled. She was pretty loopy coming back from the oral surgeon, and promptly flopped down on the couch and went to sleep.

Right now she’s not feeling too bad, but I know later today she’ll be pretty unhappy. Fortunately we’ll get this whole thing out of the way before a few more family trips and the start of school…

Last week we headed out to Utah for Laralee’s somewhat-annual family reunion. As long as we were out there, we decided to stop in at BYU to take a look at the campus. Along with Colorado School of Mines, Alex accepted their offer to attend and then immediately deferred his start date for two years. Despite reading about BYU’s engineering program, Alex had never seen the campus.

He was pretty excited about it. 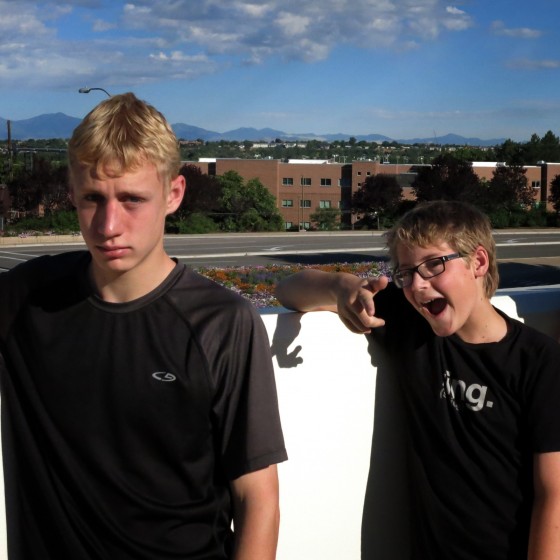 Unlike Mines, it’s a big school with over 30,000 students enrolled. We had a student tour guide who was bubbling with energy as she took us around campus and told us how awesome BYU is. We had some great views of the campus from the top of the highest building: 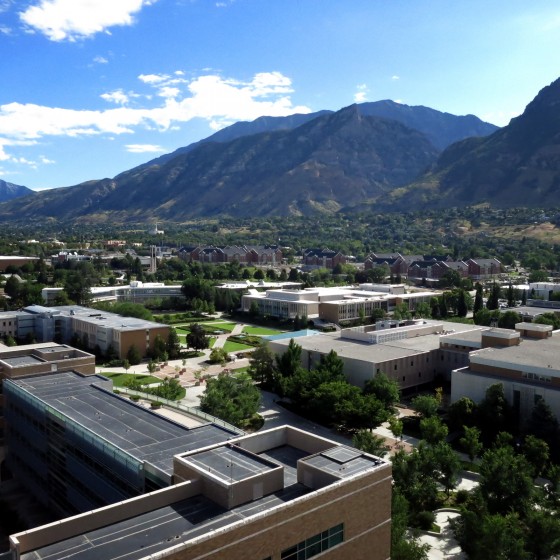 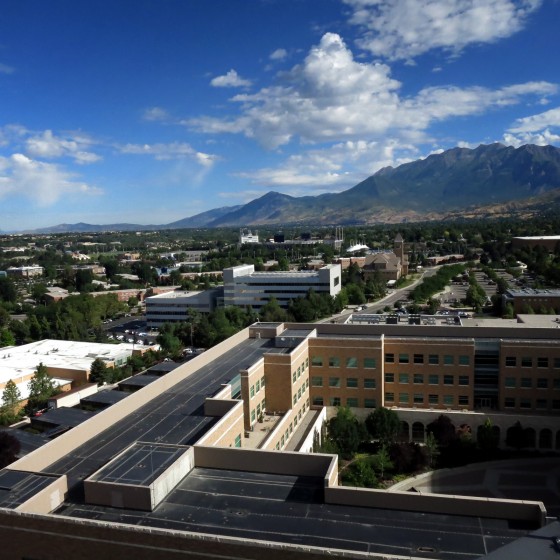 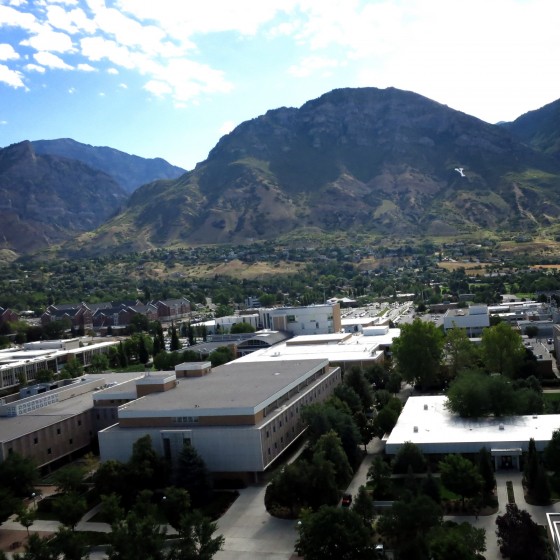 After our tour we dropped in on the mechanical engineering and computer science departments. I enjoyed this sign on one of the computer labs: 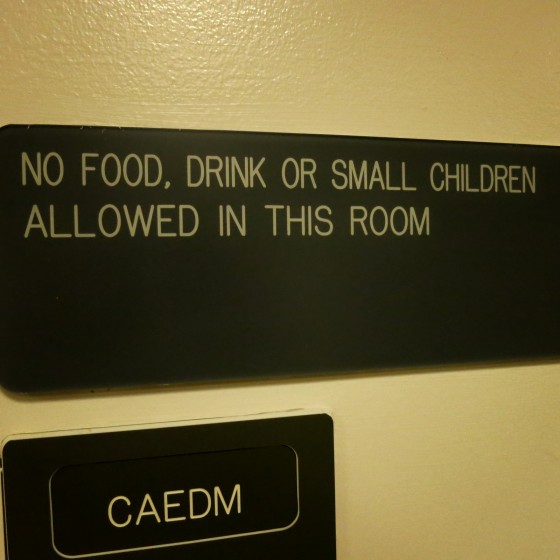 I don’t know if the university budget is a little tight this year or something, but I was surprised to see the, uhh, outdoor bathroom facilities at the library: 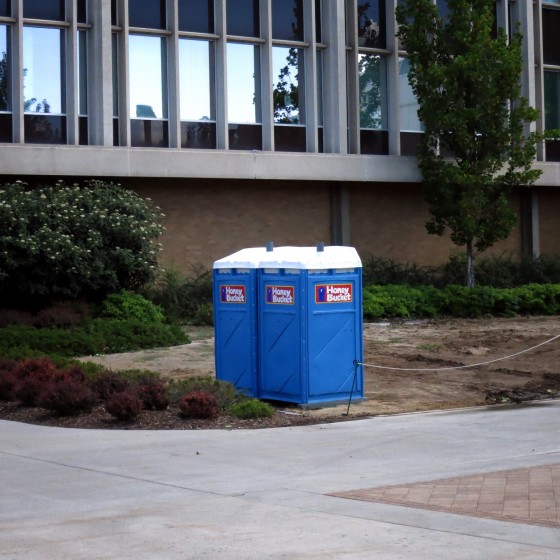 Alex found an interesting sculpture of modern art with a head-sized hole in it. 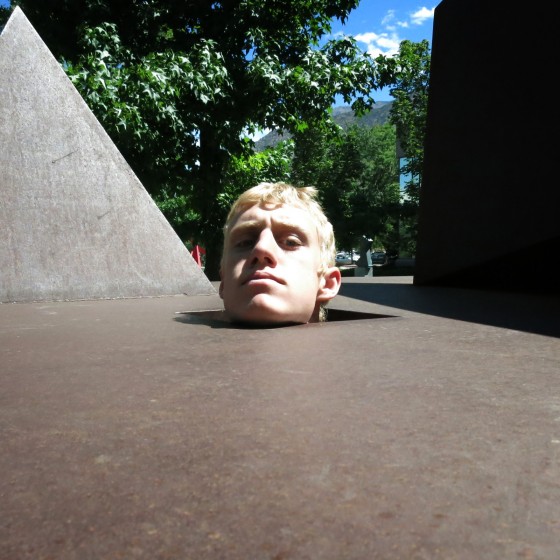 After BYU and some lunch at Smashburger, we stopped by Mr. Mac, which is a well-known men’s clothier. It was time to buy Alex a suit for his mission. They had quite a few options in rows and rows: 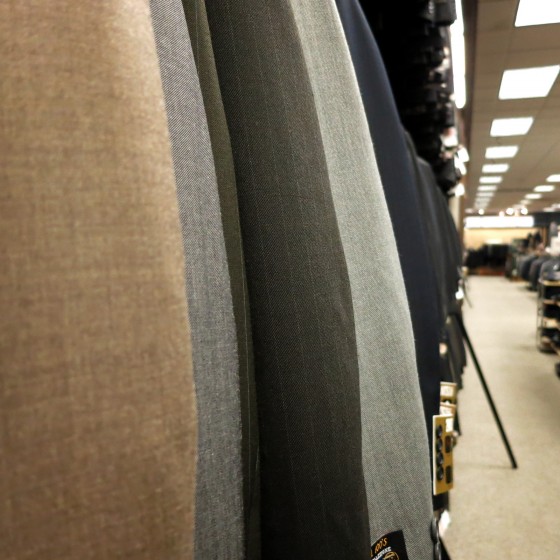 Fortunately he’s occasionally like me– quick and decisive– and was able to pick out a suit he liked after modeling a couple of them. He was measured so everything could be tailored just right. Pretty cool. 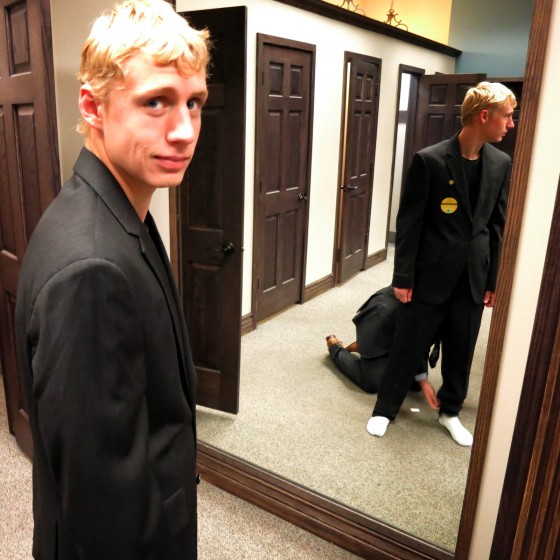 I found a pretty sweet tweed jacket. Wearing it made me feel like a weird professor in the 1950’s or something. 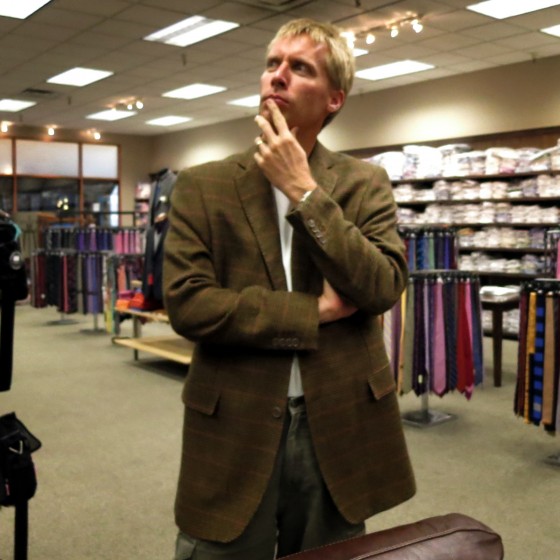 After a little over an hour, we walked out with a suit, two pairs of matching pants, five more pairs of “bucket washable” (!) slacks, eight white shirts, eight ties, two pairs of durable dress shoes, a dozen pairs of socks, two belts, and a nice layered fleece coat. Whew! Alex is ready for the bustling metropolis of Lima or the rugged mountain villages of Peru.

On our way out of the store I couldn’t help but notice this sign for a restaurant in the food court: 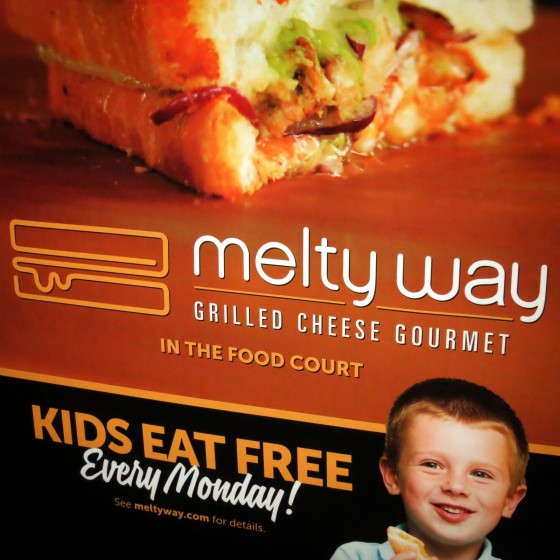 All in all, it was a great few days with family.

Amazon sent us a huge box the other day. 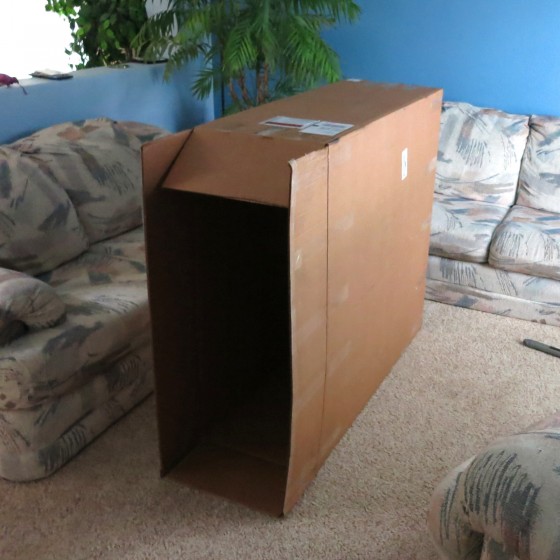 What could be in it? The mystery was killing me. I took a peek.

Hmm. Kyra with a towel on her head. I wouldn’t have guessed that…

Boy, I tell you, boxes this big are a dream for little kids. Maybe we should donate it to someone in the neighborhood. 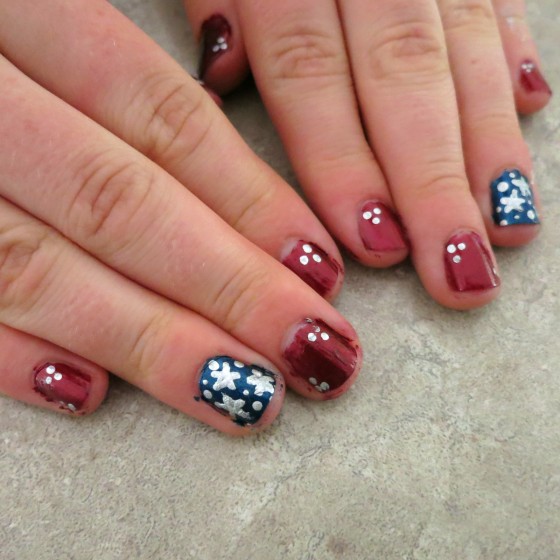 She was sure to point out that the colors were “muted”, so they matched Captain America’s outfit. Of course.

I saw a picture of Bech on Facebook and couldn’t resist adding some captions. 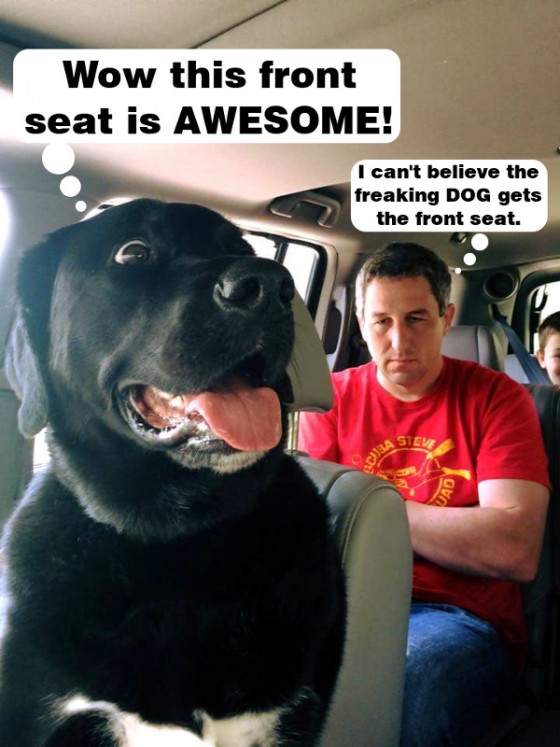