Two months ago. In a planning meeting at church, a group of us decided to host a variety show. Anyone who’d like to showcase their talents– whether they be singing, acting, playing an instrument, or just bringing some art or photography– would be invited to participate.

One month ago. In a different planning meeting with the teenagers in the church youth group, someone suggested that it would be cool if all of the kids (about thirty of them) created an act for the variety show. In the past, large group acts by the teens didn’t turn out so well. They have a hard time coming up with original material, and many of the jokes that seem hilarious at the time end up falling pretty flat. So I sort of cringed inside at the idea, but I put on my brainstorming cap and thought about how we might pull it off. Finally, inspiration struck and I suggested that perhaps all of the kids could get together and do a dance number to Michael Jackson’s classic “Thriller”. I had visions of YouTube videos (there are a lot of them) where the groomsmen at a wedding do the dance, or a flash mob springs up, and so on. They always seem really fun, and the dance seems pretty straightforward.

One week ago. My friend Talise volunteered to work on the dance and organize a practice. She’s very musically inclined and incredibly talented, so she was a natural choice. She found a web site called Thrill the World which is dedicated not only to teaching people how to do the dance, but has apparently become an annual event where thousands, or perhaps tens of thousands, of people plan to dance at the same time. Who knew.

Tonight. Thirty teenagers and about a dozen adult leaders– including me– gathered in the church gym to practice the dance. Talise went through all of the steps from the Thrill the World guide. It seemed like there were about two hundred of them. I had no idea “Thriller” was so complex. As you might expect, the twenty or so girls (including Kyra) picked it up pretty quickly and actually looked relatively synchronized. Meanwhile, the ten boys (including Alex) and most of the adults struggled to keep up and looked pretty lost. 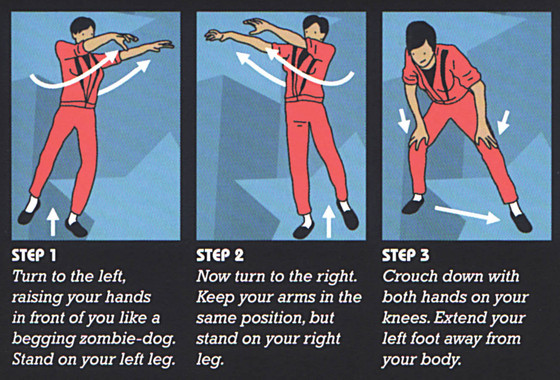 A week and a half from now. We’re going to perform at the variety show. We’ve all been asked to wear dark pants, a white t-shirt, and (of course) a white glove with sequins. It will almost certainly be a night to remember. I suspect it’s going to look like thirty epileptics who are off their medication, lurching around, while Talise and a few girls do something relatively “Thriller”-like and everyone else can’t remember whether the next step is the “roar” move or a Michael Jackson “kick and point”.

It’ll definitely provide funny stories for a while.

Today there was a decent snowstorm, so we were all sitting around watching the snow fly and decided to play some games. We started with Ticket to Ride, and Alex trounced us pretty well. He manged to get several overlapping cross-country routes, and it’s hard to lose with those.

Then Zack and Alex insisted on a game of Axis and Allies, which we’ve talked about for a few weeks but never got around to playing. We’d attempted this several years ago– in 2008, to be exact— and it didn’t go so well. But now that the boys are older, I figured we’d see what happened.

I explained the rules and we played a few turns. I was the Axis powers, and Germany was rolling into Russia pretty well. I was threatening to take over the capitol, which of course is pretty serious. Japan had established a beachhead east of China, and the little U.S. base in Sinkiang was about to be destroyed (I’d already taken out the American fleet at Pearl Harbor, of course). All in all, it was looking like I was going to crush them. But then Alex took the British forces in for a surprise invasion of Italy, and Zack’s American research team developed heavy bombers. Ouch. The tables turned.

In the end, we called it quits because the boys were getting bored. It reminded me of the interesting dichotomy of Axis and Allies: it’s a very interesting (and historically accurate) game, but it takes bloody forever to play. In high school I think we regularly spent entire Saturdays playing a single game– five or six hours at a stretch. Yikes.

After dinner, Kyra and I played a couple games of Dominion. It was ugly; the first game saw me with 107 points to her 54, and in the rematch she scored 136 only to be bested with my record-breaking 154. She demanded that we play Mario Kart tomorrow, since that’s the game she can regularly win against me.

A few days ago Zack drew the picture below. I have no idea what it means. 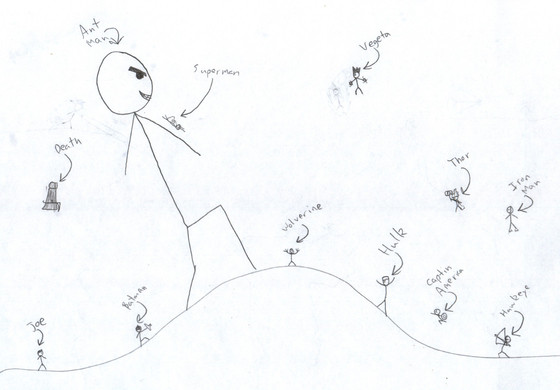 Who is Ant Man, the huge guy stomping around with an evil grin on his face?

What I like about this drawing is his meticulous detail. It’s hard to appreciate here on the web, but all of the little people are really tiny on the paper. Still, they have detail that makes it clear who they are. Cool stuff.

While I’m working this afternoon, I’m rocking out to Queensryche. I really like several of their albums, particularly Empire from 1990. 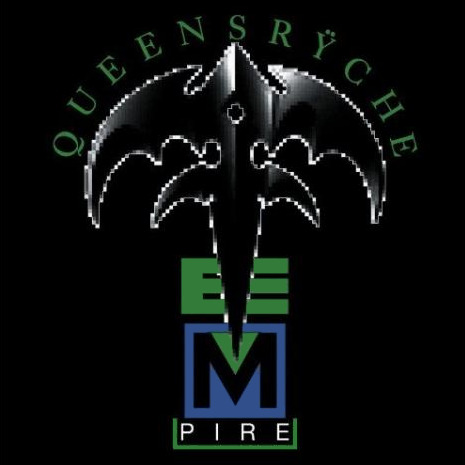 Even now, 20+ years later, it remains one of my favorite albums of all time. That said, I feel like Queensryche in general had a definite bell curve in the quality of their albums. Here’s a graph that sums up my feelings about it: 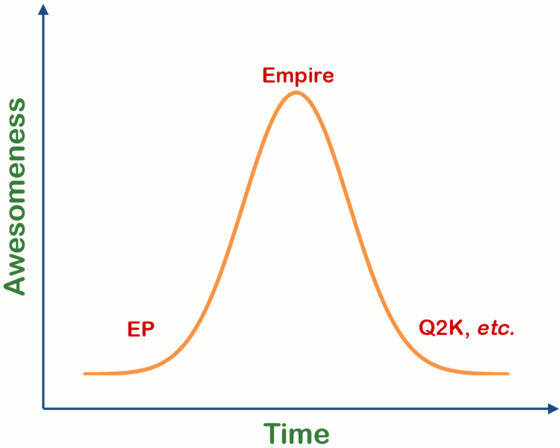 They peaked with Empire, with a couple of good albums on either side of it, but their really early stuff was too “metal” for my tastes, and their later stuff just sort of sucked on a bunch of levels.

I see they’re on tour now, coming to Denver in April. I think I’ll pass, and instead just continue rocking out to their early 90’s stuff…

Tonight I went out and ran a mile with the Boy Scouts (in the snow, no less). Alex and I are the only ones who finished it– all of the other boys slowed to a walk after about a quarter mile.

After that I played dodgeball for an hour with a couple other adults and about thirty teenagers. It was a blast, and good to know I can still fire those things at near-sonic speed. I may not be the best at catching dodgeballs, but it’s sure fun to take out a bunch of swaggering kids.

When it was all over, I wasn’t sore at all. Take that, old age!

Yesterday Laralee returned from a trip to Salt Lake City to visit her family. She flew, of course. Before she left last week, we were talking about all of the stuff she was packing. She wanted to bring a lemon. Yes, a lemon. Don’t ask me why– I don’t actually know, nor is it relevant to this story. 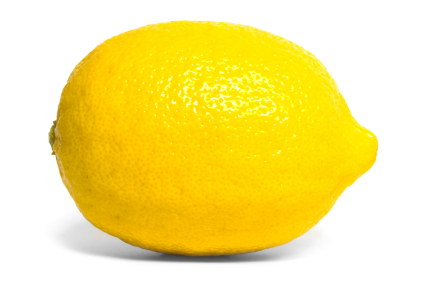 She was concerned, though, because she wasn’t actually sure if she could bring it. Are lemons some kind of controlled substance? Would the TSA confiscate it? Would they ask questions about it, demanding to know why she wanted a lemon on the plane?

As it turned out, nothing happened and the lemon (thankfully) made it through security. But it made me think about how ridiculous the whole situation was.

Congratulations, terrorists. You won. You’ve left our country in such a state of fear that we don’t even know if a stupid lemon is going to trigger alarms or violate the absurd rules we’ve built around air travel, all in the name of hiding from the bogeyman.

I don’t know where Zack gets it, but today he shared this nugget of wisdom with us:

Being in love is like peeing in your pants. Everyone can see it, but only you can feel it.

Laralee may have left me for Valentine’s Day to visit her mom in Idaho, but she dropped off a nice rose on my desk. 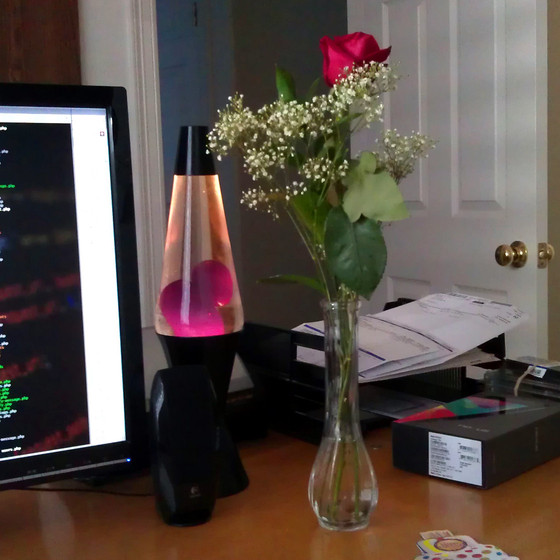 Okay, that’s weird. Amazon just sent me an email to tell me that a CD I bought seven years ago is now available to me as MP3 files in Amazon’s music cloud. 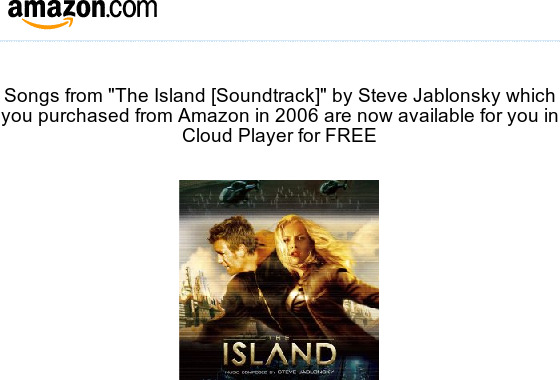 Of course I ripped the CD to MP3’s as soon as I received it, so it doesn’t really matter, but this seems like kind of a strange thing…