In what has to be the best line from the Republican National Convention, Gov. Schwartzenegger told the delegates:

“To those critics who are so pessimistic about our economy, I say, don’t be economic girly men!” 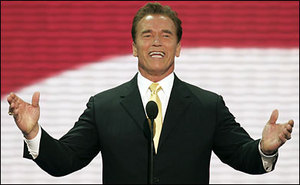 “One of the interesting things people ask me is, ‘Can you ever win the war on terror?’ Of course you can.”

“I have a clear vision and a strategy to win the war on terror.”

Personally, I think Bush’s statements for the past few years about how the U.S. can “defeat” terrorists and “win the war” against them have been naive at best and calculably misleading at worst. The very nature of terrorism makes it not so much a war as a constant struggle to avert individual situations created by any number of secretive groups. Thus, it’s actually refreshing to hear him (finally) admit that it’s not something that can be “won”, but rather that through persistence and vigilance we can make it harder for terrorists to exploit situations and carry out attacks.

“This is no time to declare defeat… we [he and Kerry, presumably] have a comprehensive long-term plan to make America safer.”

[When asked if the ‘war on terror’ can be won] “Absolutely.”

Much as I hate to admit it, Bush’s return to planet earth is a nice contrast to John, John, and Rudolph– who maintain that terrorism can be defeated once and for all. Of course, these are nothing more than vague campaign promises, and Edwards’ statement in particular reeks of Nixon’s “secret plan” to end the fighting in Vietnam.

I guess all in all, I much prefer a president (or any politician, for that matter) who admits there are tough problems out there, and the solutions aren’t as easy as another “intelligence chief” or more security checkpoints or whatever. The terrorists are out there, they can’t be taken down with a single decisive action, and they sure as heck aren’t going to disappear any time soon.

My friend John was on a family trip driving from Denver to Seattle and back, much like we did a few years ago, and met a gang of motorcyclists at a campground. (When I say “gang” I mean a group of fairly nice-looking people all riding motorcycles, not a posse of big mean nasty-looking bearded guys on hogs.) Anyway, John told me he was making chit-chat with them over the campfire about where they were headed, and they admitted they didn’t really know.

“We just shoot the arrow at the barn, and paint the bullseye later.”

That’s deep on several levels. Sometimes I think I go through life the same way.

Now I remember why I never listen to the radio.

I had taken out the 12-disc CD magazine from my car (it was time to switch to some new CDs) and went out to run some errands this morning. I clicked on the radio and scanned some likely stations, and realized there are generally only two things you hear these days on the radio:

I guess I’ll stock up my CD magazine again…

I just did a check of my backup files so I could see where the bulk of the data lies. There are a staggering 904,000 of them cluttering my hard drive. Yikes. I still remember the days of the Apple IIe, when everything (including the operating system) fit on a single 5 1/4″ floppy disk.

In an old, grumpy voice:

“Back in MY day, we didn’t have these fancy operating systems. We didn’t even have directories. We had twenty files to a disk, and we LIKED it that way!”

Thank goodness for progress. I think. 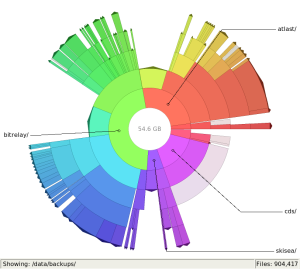 My vote for The World’s Greatest Web Site continues to be Zombo.com. Its mix of cheesy background music, powerful motivational messages from some Jamaican guy, and complete lack of design make it a hands-down winner.

Where else can you hear such great phrases as

“At Zombo.com, the only limit is yourself.”

“You can do anything at Zombo.com! Anything at all!”

“Welcome to you who have come to Zombo.com!”

“The infinite is possible at Zombo.com! The unattainable is unknown!”

Oh, and of course this is coupled with the fact that it does absolutely nothing else whatsoever. Sweet!

“Do not worry about your difficulties in Mathematics. I can assure you mine are still greater.” 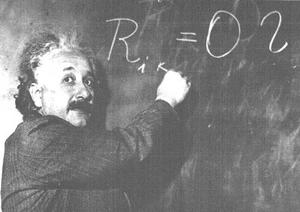 Our pet turtle Spike eats earthworms for dinner. Every evening Alex drops one into his tank (a 10-gallon aquarium) and Spike goes after it with gusto.

Last night, around eleven, I noticed the worm that had been provided for dinner was actually climbing the corner of the tank. He was about halfway up (the tank is about a foot high) and I have no idea how he was sticking to the glass. As I watched he seemed to give up, and slowly dropped back down into the water. Spike looked at him, half-interested, but didn’t attack.

I told Laralee we should reward the worm for his gusto by turning him loose in our garden to live out his life. Anyone with that kind of drive doesn’t deserve to be a turtle snack. She refused, and we headed off to bed.

This morning Kyra found the worm in the middle of the family room.

The little guy must’ve finally made it up and out of the tank, down the couch (which is just beneath), and halfway across the floor toward the back door. He was a bit dried and crusty, but still alive. If anything, I told Laralee, this proved he had a will to live far beyond any other earthworm I’ve ever seen.

So she set him free in her garden. The plucky little guy sure earned it.

… So one of my web-hosting clients, down in Louisiana, hasn’t paid their bill in almost nine months. I’ve called them every few weeks all year long, trying to get the invoices paid. I’ve talked with four different people, including (1) the technical guy, (2) the receptionist, (3) the accountant, and (4) one of the managers. Nothing has ever come of it, except repeated promises of “I’ll get right on it” and even “I’m sending the check in today’s mail.”

Finally, my cup of frustration runneth over. This afternoon I put up a lovely web page in place of their site that said “Sorry, this site is temporarily shut down for lack of payment.” It even had a wonderful “talk to the hand” graphic on it. I wondered how long it would take to get their attention, because I know they use the site every day (it’s a password-protected database application).

Sure enough, about five minutes later the phone rang and I saw it was a 360 area code. That was quick. Of course, as anyone knows, 360 is Olympia WA. It was Chancellor calling about some other stuff. We talked for a while, and after I hung up I got another call– this time from a 337 area code. Ahh, Lafayette LA.

It was some government employee from the city, evidently a client of my client. In other words, he was one of the people paying the bills to use my system. And he was panicked because he needed access to the information in the database. Not only was it his job, but there were legal ramifications… if he was unable to get the data, I guess it had repercussions far beyond inconvenience. I explained the situation and told him how my client hadn’t paid the bill for nine months. He understood, and said he would call them immediately and explain things to them.

About five minutes later I got another call from some guy at my client’s company. He was very apologetic and rambled on about how his company was managing the finances of the other company, and the other company was in deep financial doo-doo, and on and on. I didn’t follow the whole situation, but suffice to say he was desperate to get things back online. He said he’d fax a copy of the check to me immediately, and overnight the money.

I told him to calm down; I had already re-enabled the web site. I was just looking for some action, and my persistent but polite phone calls had resulted in zero response. This was definitely an attention-getter, and he was falling all over himself to make sure I understood things were going to happen.

Sure enough, a few minutes later the fax came through– there’s the check, all prim and proper. And the real check, he assured me, was on its way. Finally.

Funny stuff. I almost felt like a cyber-extortionist. “Cough it up, or the web site stays down…”

As I build various web applications, I often use a little floppy disk icon to indicate whether information was saved. I think the floppy disk has represented saving stuff for about the last ten years, and it makes me wonder what will happen in the next ten as the floppy goes the way of the external 14k modem with blinking lights. What will we use as an icon for saving stuff? A hard drive certainly isn’t very clear (what, a silvery box?)…