After three consecutive championships, I failed to make it a fourth tonight. My team ended the last indoor league in a close second-place finish. But we had a lot of fun and a great team. 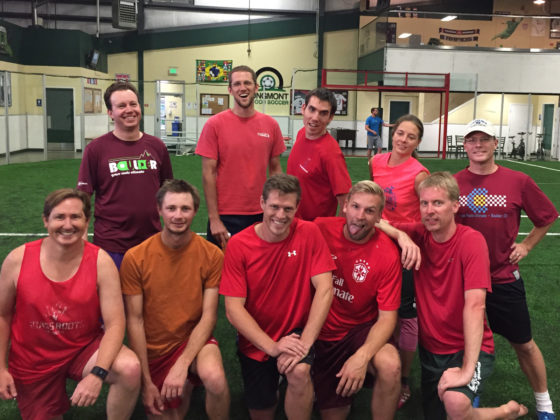 Tomorrow night is the summer league draft, and games start next week. On to the next season, and the next run for a championship! 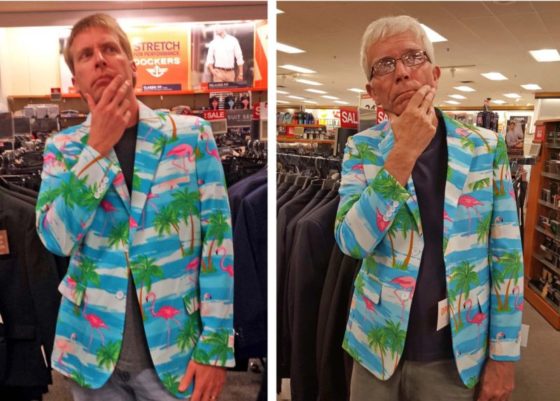 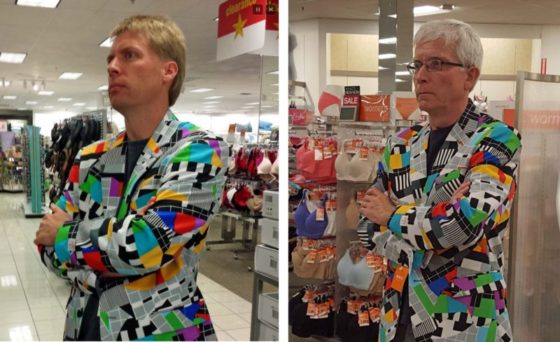 I think he sports the look better than I do…

It was awesome to get a surprise visit from my good friend Matt over the weekend. He and his family moved to Utah about a year and a half ago, but came back to celebrate his nephew’s graduation. Here we are at church: the old bishopric reunited! 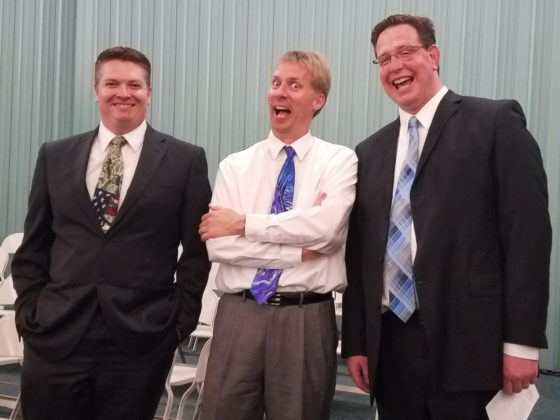 Today was the sort-of-annual Memorial Day ultimate hat tournament down in Boulder. While 50,000 people are running the Bolder Boulder, about a hundred ultimate players are on the soccer fields battling for eternal glory. A “hat” tournament essentially means everyone throws their name into a hat, and the teams are picked randomly.  It’s a fun way to meet some new people and play with old friends.

It’s a four-game tournament, with two rounds for seeding and then semifinal and final games. My team won our first game handily, then tied our second one to advance to the semis. True to form, Colorado weather struck and it rained during the entire game. It made the game a bit more interesting as we slipped on the grass and tried to huck a wet plastic disc. But we managed to win that game to get to the finals. Our opponent for the championship was the same team we’d tied a couple of hours earlier. This time, however, we crushed them in a decisive victory. 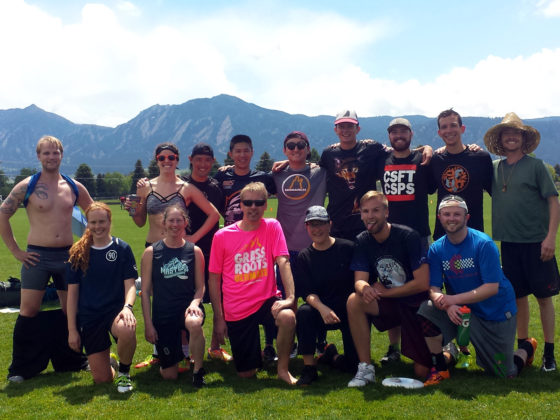 It was a lot of fun, and a great group of players. Here’s to my third championship in a row!

Last night marked the end of the Longmont spring ultimate season, so we had the big tournament. Last week’s regular-season games had been snowed out and the weather yesterday was pretty crazy. When the tournament started, the wind was probably blowing at a consistent 20mph, which always makes for a tough game with a frisbee. Halfway through the first round of games, the rain started… at first as a little bit of mist, but then as a full-fledged downpour.

We managed to eke out a win against our opponents, moving to the semi-finals. The rain continued and the temperature dropped. It was a hard-fought game, and we came out on top to advance to the finals. The team who had been dominating the league all season was knocked out in the semis, which was a little bit of a relief because we’d had trouble against them in earlier games. They later admitted it was because of the wind: their core strategy was to huck long passes to their fast/tall runners, and that simply didn’t work. I guess that’s a lesson in not being a one-trick pony.

As the final game started, the weather became strangely calm. The rain and wind stopped, and unbelievably, the sun came out as it was setting over the mountains. That caused a fantastic huge double rainbow to arch over the fields– beautiful. We played a hard game and dominated the first half, leading 7-3 as we took a few minutes to rest at halftime. But the second half was a struggle, and we found ourselves tied 8-8 after they’d outscored us 5-1 in an amazing comeback. We traded a couple more points and at the time cap we were still tied. That meant it was “universe point”, where the first team to score would be the champions.

It went back and forth as both teams played strong defense. Finally we managed to drive it into the endzone for the win. Woo hoo!

The championship prize was GRU athletic shorts, which everyone was pretty excited about. We took a few pictures to celebrate our win: 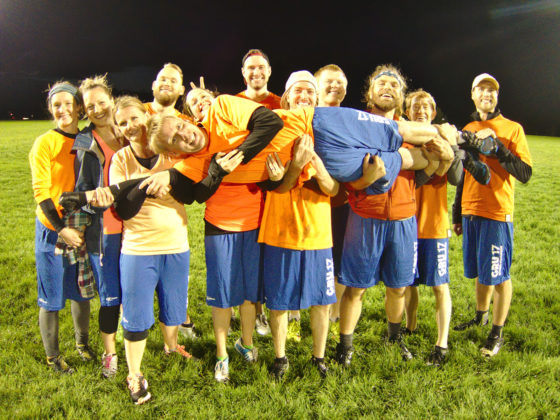 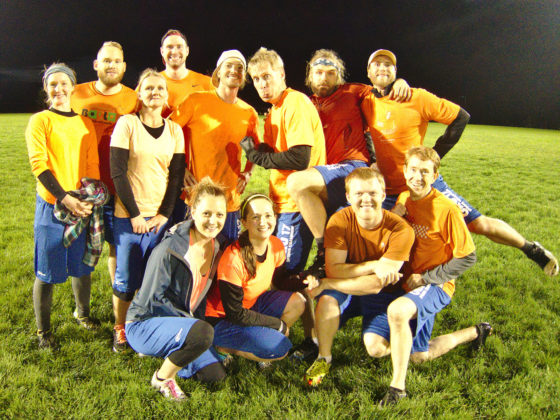 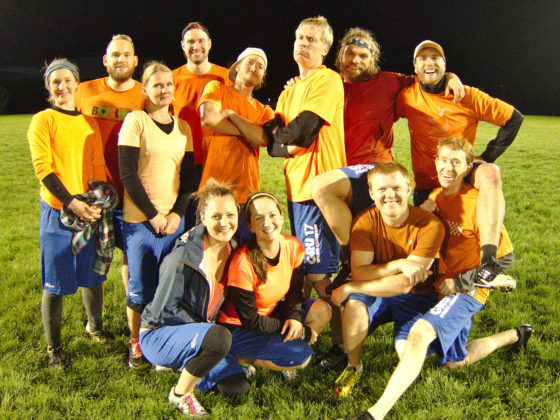 This was one of the most fun teams I’ve been on in a long time. Instead of the usual cheers that teams traditionally write after each game, we decided to play goofy games on the field like Ninja, Wah, Bang, and even Rock-Paper-Scissors. So all season long we’d finish our games and then challenge our opponents to something silly. I hope to make it a new tradition (partly because I’m terrible at writing cheers).

After last season’s indoor league championship, I have two in a row under my belt. Nice!

What a wonderful world

Isn’t it amazing that we live in a time when you can buy an entire bag of Smarties for a dollar at the dollar store? 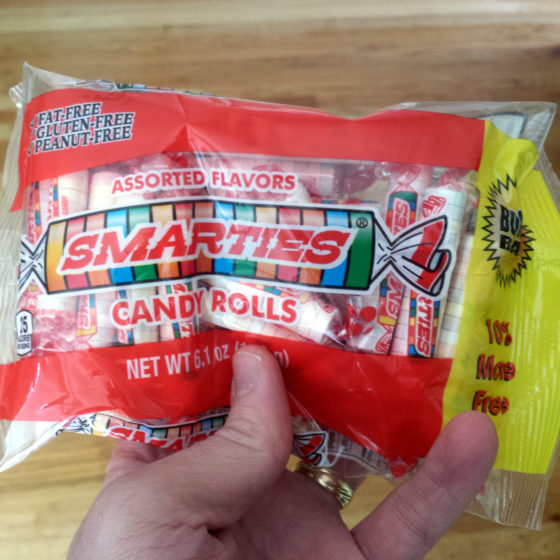 Today was the last day of seminary. Just before 6am I opened the door to my classroom and found this: 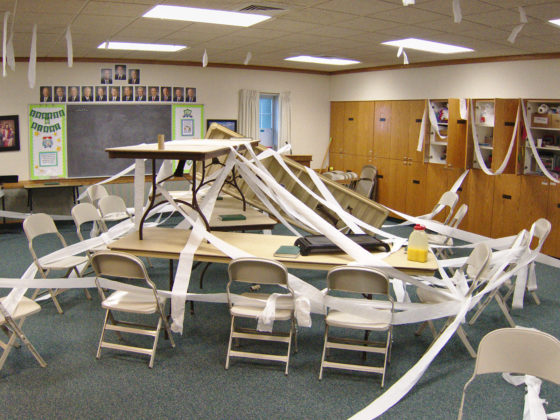 In teenage-speak, I think that means I’m popular. Or, maybe it means someone has a deep burning hatred for me; I can never remember. I’m not sure who was responsible– no one in my class took credit– but we did end up with a pretty impressive three-foot-wide ball of toilet paper.

As class was ending, I decided to take a picture of the 15 students (of 17) who were here today. What a handsome bunch! 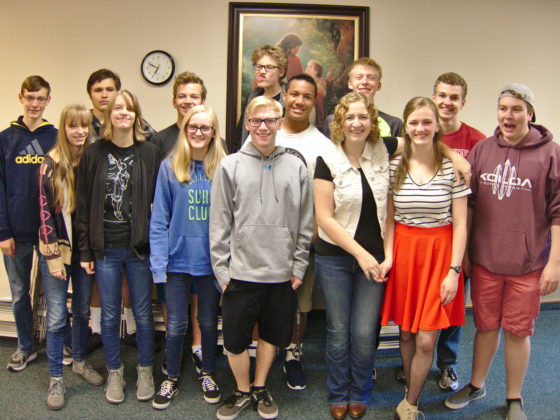 This photo more accurately captures the spirit of the class, though: 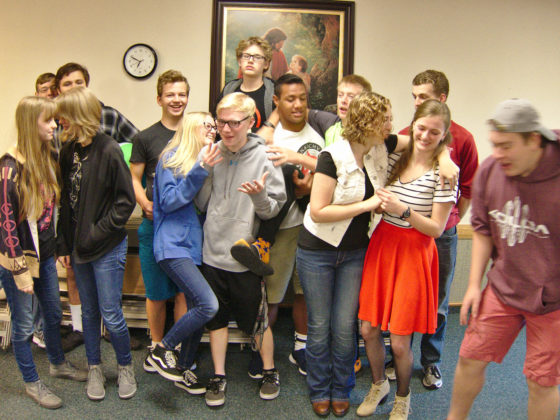 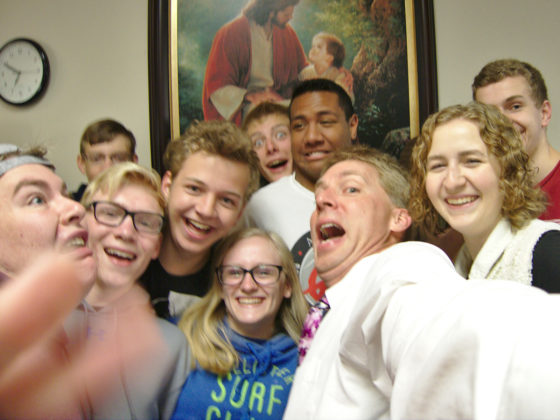 I have to give a big shout-out to my fellow teachers, who are amazing and have been a huge support to me all year. Thanks, Katie and Jodi! 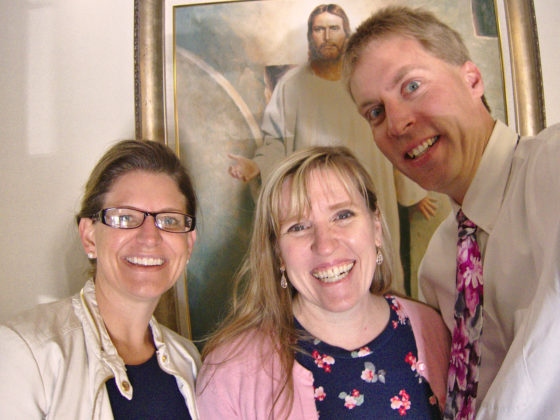 Here we are showing a little more personality– for some reason I find it hilarious that Jesus looks so serious behind us. 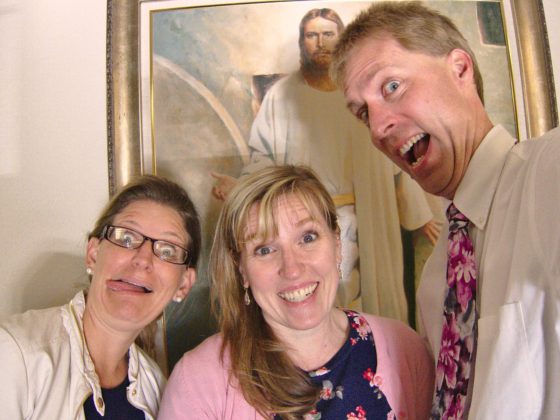 I absolutely love my calling as a seminary teacher, despite the early mornings and long hours preparing. It’s mostly because I have the privilege of spending each morning with 17 amazing kids. I’m looking forward to next fall, when I get to do it for another year. (I’m also looking forward to summer vacation, though!)

This morning I found a baby rabbit in my window well again. Maybe it was the same one from yesterday, and he still hasn’t figured out gravity. In any case, this time it was Zaque who rescued him. 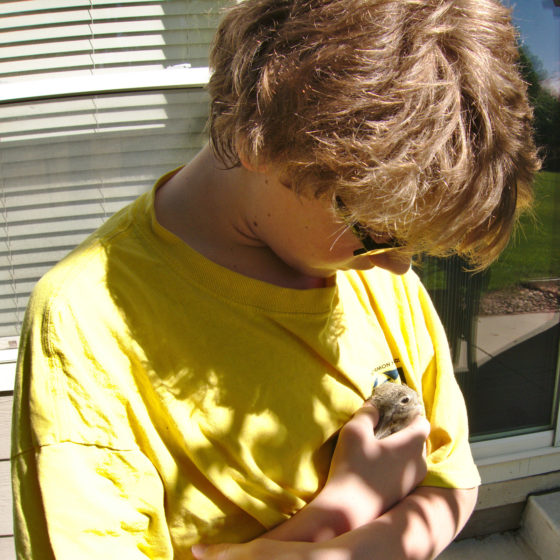 I told Zaque he should let the little guy go, and he said “in a little while”. I headed out to meet up with a friend, and Laralee and Kyra were both gone, so Zaque worked on some chores around the house. When I came back a little over an hour later, I asked if the rabbit had been set free. It turned out he’d been hiding out in Zaque’s sweatshirt, just tucked away in the corner of a big pocket. 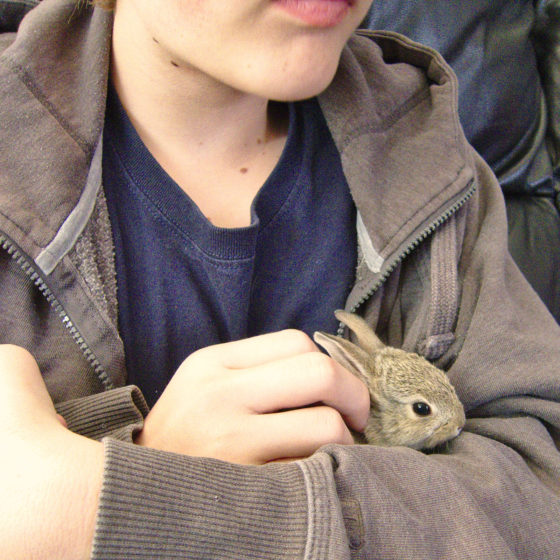 Zaque had tried to feed him strawberries and some water, but the rabbit didn’t seem interested. He was actually pretty content to just sit with Zaque. It was pretty funny to see my teenage boy enjoying some gentle, quiet time with a little animal. Laralee came home and, after hearing the story, commented that maybe we should get Zaque a pet. No thanks.

Eventually he was returned to the wild. I guess I’ll keep an eye on the window well in case he decides to drop in again.

So, how should we measure temperature?

I’m not quite sure what to make of this. So, Fahrenheit is… good?

Sometimes I stumble across some really odd things in my house. Well, maybe in someone else’s house they would seem odd, and for some reason in ours they seem right at home. Take, for example, this box I just noticed on our kitchen counter: 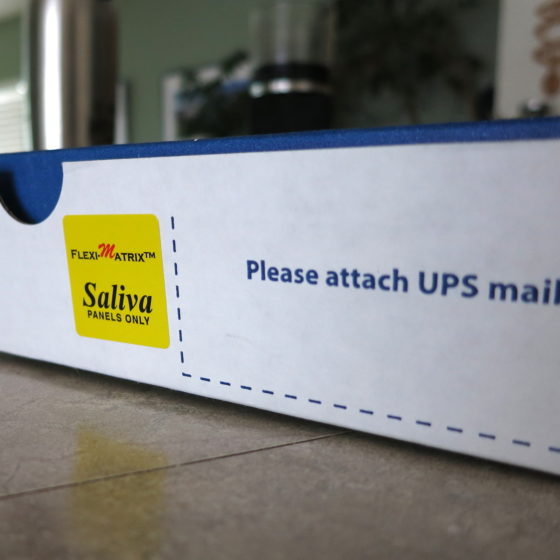 It is, quite literally, a box of spit. I’m guessing Laralee is sending off a few samples of hers for some testing or something. Who knows.