With nothing really earth-shattering to do tonight, I decided to hack together some programming to allow me to send an e-mail to my server and have it drop right into this blog. So this is an e-mail– we’ll see if it ends up in the right place…

Wow, these spammers are getting nasty. Today I have a message entitled “We have hijacked your baby”. I’m not sure how one hijacks a person, but certainly that sounds like bad news. I guess the message is supposed to be some kind of ransom note. 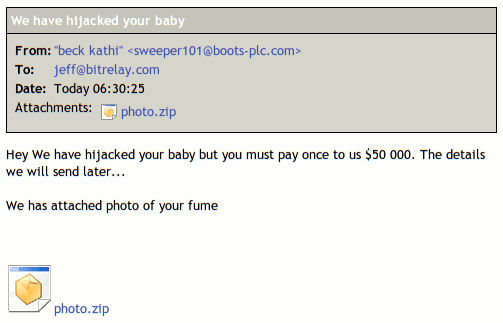 Of course the zip file containing a photo of my “fume” (?) contains an executable that, on a Windows machine, would probably install a nasty piece of software.

“Bite off more than you can chew, then chew it.”

So Tom abandoned his blog after using it for years, moving over to Blogspot with the masses. I find that an interesting side effect of being a web developer is the subconscious need to “eat your own dog food”, meaning I feel like since I know how to write my own blog software, I should do that instead of falling back to some third-party toolset.

Of course I wrote this four or more years ago, when things like Blogspot didn’t even exist, and I’ve put so much stuff into it that it’s not really worth the effort to move everything to another (perhaps more capable) system. Ah well.

So the web development world is abuzz with news of Mozilla’s new Ubiquity plug-in. Apparently it allows you to type things like “define ubiquity”, which will open a web page on dictionary.com or something and display the definition. Or “map 653 Elm St. Hoboken NJ” and hop over to Google Maps.

What’s funny is Konqueror (my browser of choice) has been doing this for years. It has “web shortcuts” built in when you install it, and you can customize it with anything you want. As such I have all kinds of shortcuts– and in fact “define” and “map” are amongst them. Just tonight I typed “wp:transcendental number” to pull open the Wikipedia article about transcendental numbers.

I tell you, it’s hard being so far ahead of the curve.

A group of researchers who apparently had nothing better to do examined thousands of satellite images from Google Maps, looking at fields where cows were pictured. They found that most of the time, the cows are aligned along north-south magnetic field lines.

Just another factoid to add to my armory of party conversation starters.

“The Bush administration… has made fear the main driver of our foreign policy. It has turned a deadly serious but manageable threat– a small number of radical groups that hate America– into a ten-foot tall existential monster that dictates nearly every move we make.”

Although I’m no fan of Obama, and Biden has a bit of a checkered past, his stance against the War on Terror is admirable and I’m hopeful that if he’s elected, we’ll see some changes in American policy– both at home and abroad.

We need the old USSR back. As odd as this seems, there was actually a sense of competition going on back then– competition for goodness. I remember mocking the USSR for having secret courts, secret laws, secret prisons. Now WE have those things. I think that at least in part it’s because we no longer have competition to compare and contrast our government’s behavior to, so people are less apt to associate this kind of totalitarian behavior with The Evil Empire. As a result, we have become The Evil Empire.

My friend Paul is on the docket for a security clearance, and he mentioned my name as someone who can vouch for his character. That means the Defense Investigative Service (or something like that) sends a guy over to my house to ask probing questions about Paul.

“Does Paul have any problems with drug or alcohol abuse?”

“Does Paul exhibit any signs of mental instability?”

“Did anything happen in Paul’s past that could potentially be used to blackmail him?”

“Does Paul associate with any subversive organizations, terrorist groups, or people who want to do harm to the United States?”

My answer to that one was, “You mean like the Republicans?”

Of course these investigators have their sense of humor surgically removed when they first start their jobs, so he wasn’t amused by my answer. He sort of sat there waiting for me to give him a real answer, and after a moment I admitted that no, Paul probably doesn’t hang out with terrorist cells.

Boy, I don’t miss those days of having a security clearance.

Wow, it must be kind of fun to live in the fantasy world inhabited by McCain. He’s going to win the war in Iraq! Win it! I suppose he’ll use elves riding magical flying unicorns powered by rainbow juice to do it or something, because I don’t know how else victory could be accomplished in the midst of that disaster.