This cracked me the heck up. 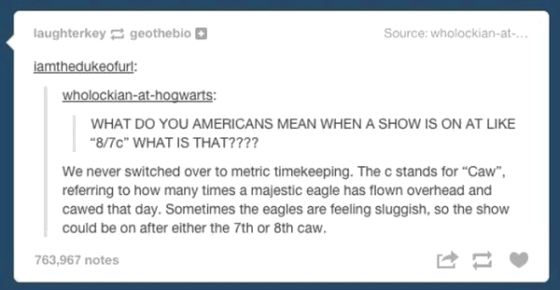 Quote of the day

“A burrito of awesomeness smothered in awesome sauce.”

Wouldn’t it be cool if we could all have experiences like that frequently?

It’s official: we’re on the way to Hawaii.

Over twenty years ago, Laralee and I talked about taking a trip to the islands for our honeymoon. Of course we were flat broke back then, so we kept putting off the vacation. Finally, a couple of months ago our friends Kurt and Megan decided they wanted to go to Hawaii for Kurt’s 40th birthday. They invited us, we accepted, and now we’ve booked our trip. Well, technically Megan booked our trip and paid for everything. She texted this: 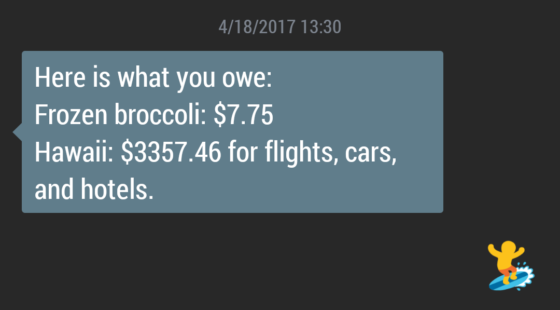 Yeah, she picked up some broccoli for Laralee at the store, so I guess we owe her for that too.

This is me today.

Last night Zaque participated in a youth activity at church where they played “bigger and better”. They divided into teams of about four teenagers, and each team was given a standard #2 pencil. Then they were supposed to go out to the surrounding neighborhoods and talk to people to see if they could “trade up” for something better. Whoever had the coolest thing at the end of the night was the winner, so to speak.

One team headed off to the home of one of the kids, and came back with their SUV. I don’t think that was in the spirit of the game, though…

Anyway, Zaque’s team walked to our neighborhood and saw an older woman sitting on her front porch smoking a cigarette. They walked up to her, explained who they were and what they were doing, and asked if she’d be willing to trade for a #2 pencil. She agreed, went into the house, and came back with a nice souvenir pocketknife. Very nice!

They went to another house and knocked on the door to find an “older dude”. That’s what Zaque said– he could’ve been 30 or 60, I don’t know. Anyway, this guy apparently used the phrase “right on” quite a bit, so after the boys explained what they were doing, he kept nodding and saying “right on”. After thinking a moment, he told them to wait while he found something in the house.

Returning to the door, he gave them sixty dollars in cash. Yeah. Apparently Zaque and his friends were dumbfounded… they didn’t expect that at all. Of course they were pretty happy about it! They were going to leave, but the man asked if they’d be willing to pray with him for a minute. Since they were from a church, he thought maybe they could all pray together. Zaque said they knelt in a circle, held hands, and the guy delivered sort of a rambling prayer that, at points, asked that the boys be blessed as they walked around the neighborhood looking for good things.

After that I guess they decided they didn’t want to give away cold hard cash, so they went straight back to the church. Splitting that four ways worked out pretty well, and Zaque said it was a “really fun activity”. Now I’m sure he’ll blow it all on Hot Cheetos or something.

Last night was our indoor ultimate league tournament. True to form, my amazing team managed to win all of our games, and we were crowned the champions. It’s been a few years since I’ve won a league, and I’ve never been on an undefeated team. It felt pretty good.

We had a lot of fun together– what a great group of players. 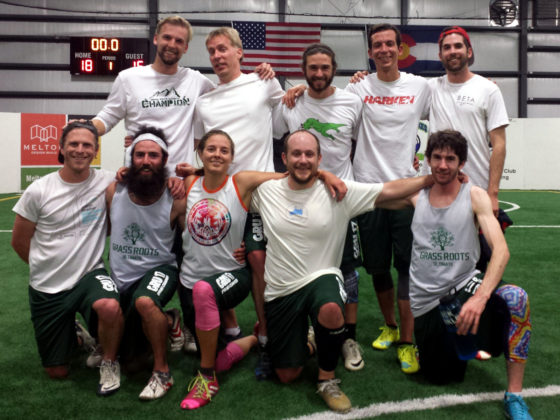 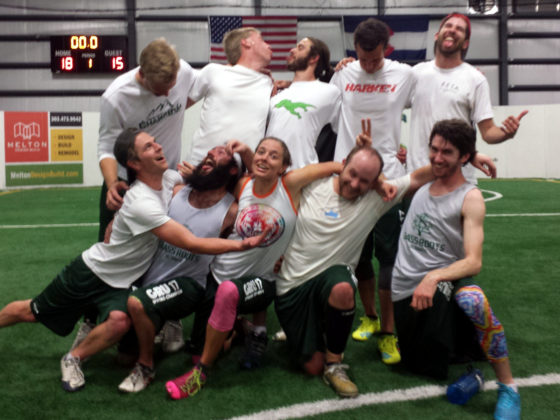 But it still works…

A few weeks ago, Laralee and I decided that we need to do some serious de-cluttering of our house. Our motto is:

It should either be useful, or joyful.

Stuff that doesn’t meet one of those criteria needs to go. We started with the crawlspace and managed to get rid of a ton of boxes that were neither useful nor joyful. While I was visiting Missouri, Laralee tackled our bookshelves, removing all kinds of books that she knew she’d never read again, or that she had electronically on her tablet, or that were duplicates of others (paperback and hardcover, for example). I told her not to touch any of mine, although the day is coming when I’m going to need to cleanse my bookshelves.

Today I was going to vacuum my office and noticed a pile of computer parts sitting on the floor. They were overflow from the closet, where I keep all kinds of old components… because, you know, you might need them someday, right? I opened the closet, gave a heavy sigh, and decided to start a purge.

How many keyboards does a guy need? I had about twenty, most of which had PS/2 connectors (PS/2 was replaced by USB at least a decade ago). Oh, and one ancient model with clackety keys and a connector I can’t even remember: 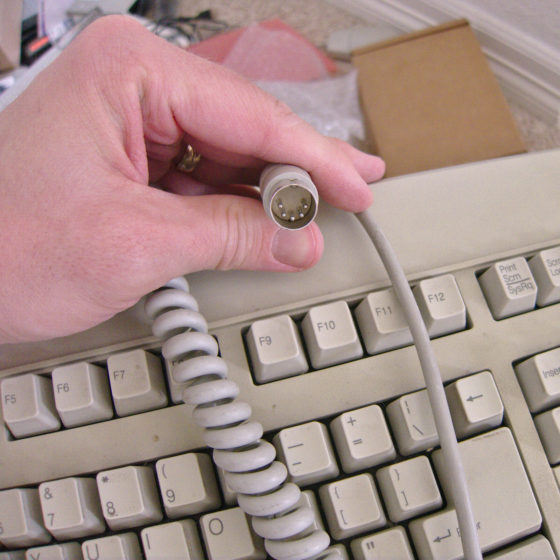 That was probably from one of my very first computers, circa 1992. Anyway, I kept one PS/2 model– still brand new in the box, in fact– because someday I might need one. I also kept a couple of newer USB ones, and chucked the rest.

CD-ROM drives were cool… in 1994. I had almost thirty of them. They’re all IDE-cabled, meaning they won’t work in a modern system, and I have a fancy little external USB unit that can read and burn CD’s and DVD’s. Even that I don’t use much, because who uses CD’s these days? So a pile of drives headed to the heap.

A scanner from the late 1990’s that probably weighed ten pounds? Gone. Power supplies for cases I don’t even have… hard drive caddies for IDE drives… speakers that don’t work… 16MB RAM sticks… an Apple mouse from an old PowerPC… all gone.

After heaving quite a bit out of the closet, I admired the pile of stuff. 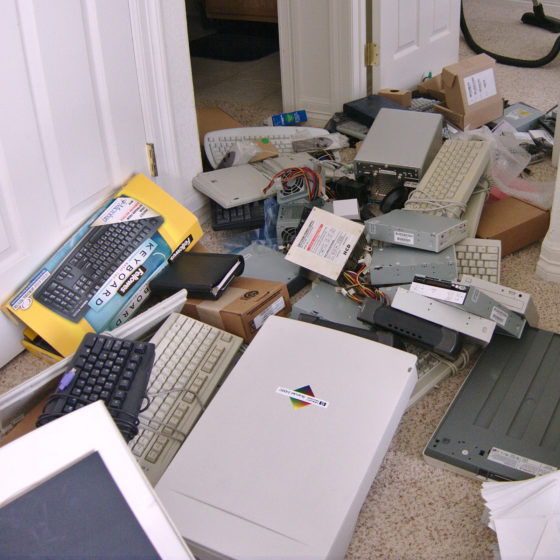 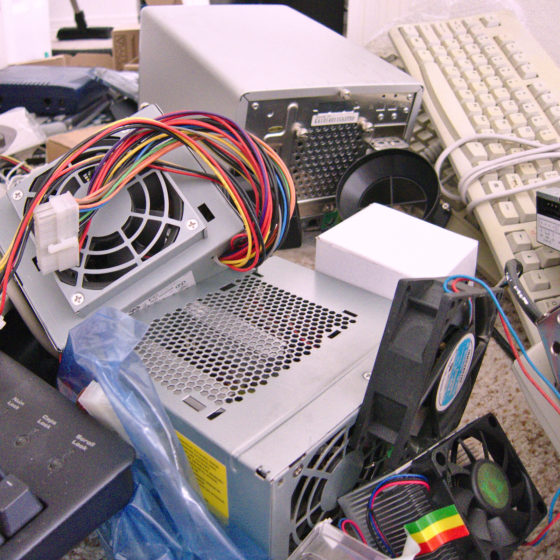 The sad thing is that much of it still works! The keyboards are fine, the CD-ROM drives spin up, and so on. They’re just from a bygone era of computers that you can’t buy any more (except maybe on eBay from junk dealers). It seems a shame to get rid of perfectly good components. The pile probably represents thousands of dollars of purchases.

But, neither useful nor joyful. Away it goes.

Yesterday in seminary I was teaching about the book of Galatians in the New Testament. As a class we talked about the influence of the world (or, as Paul puts it in his writing, the “lusts of the flesh”) and the things we can do to resist temptations. Part of that, of course, is considering the “fruit of the Spirit”:

But the fruit of the Spirit is love, joy, peace, longsuffering, gentleness, goodness, faith, meekness, temperance…

I’m not terribly creative, but every now and then I come up with a zinger. For this lesson I pulled out a bag of cuties (mandarin oranges if you want to be precise) and handed one to each of the kids. They had little ghosts drawn on them: 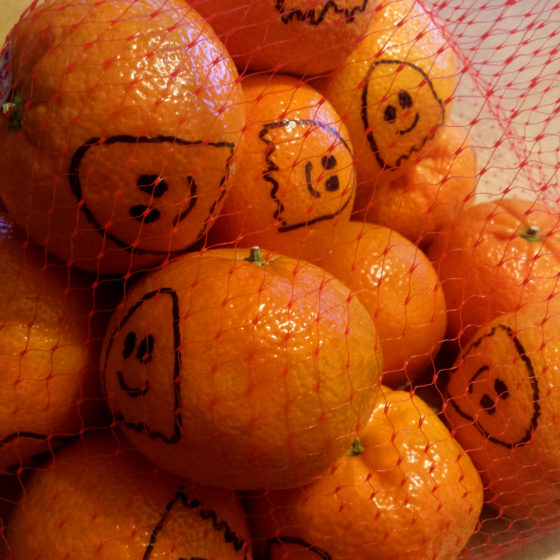 Fruits of the Spirit! Ha! Get it?

What else would you do with a Mac?

It’s sort of a long story, but I have a really nice iMac now. It’s a late-model 27″ with a fast processor and a ton of memory. Of course I’m not much of an Apple guy, so I wondered what interesting things I could do with it.

Of course: I could install Linux on it!

I popped in a Mint Linux USB installer, and a few minutes later I had a running system. I think Mint is a great distro, but it’s not really for me: it doesn’t have KDE3. I figured I’d see if I could run Jinux on it. I popped in a Jinux USB installer, and to my surprise, the installer ran flawlessly. I had to wrestle with the bootloader a bit, but after a few tweaks I had a running Jinux system (with KDE3): 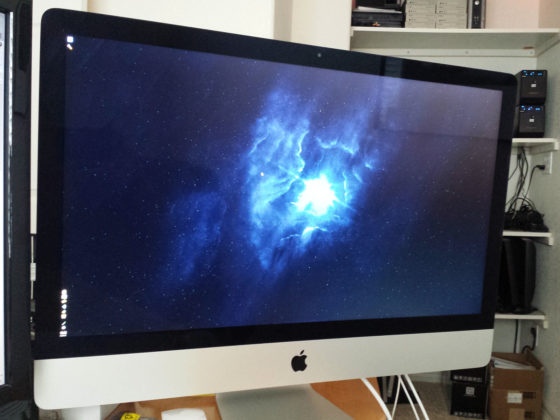 Since I’m a certified geek, I’m actually triple-booting for now: stock MacOS Sierra, Mint Linux, and Jinux. I figured Laralee might want to give this puppy a spin. She’s out of town, but when she comes home I’ll see what works.

Last night was the end of the regular season in my indoor ultimate league. As usual, I was a captain and had a great time. Not as usual, my team is actually pretty good. Well, not just pretty good… amazing. We finished the season undefeated: 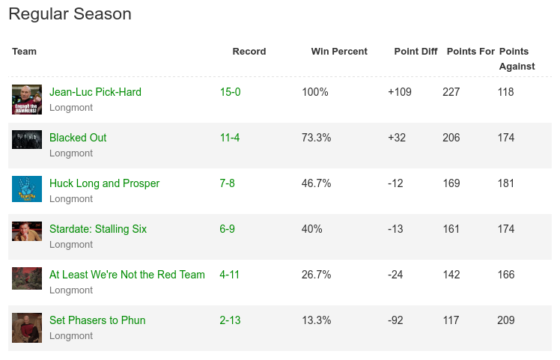 If it’s not obvious, the league theme was Star Trek, and we’re Jean-Luc Pick-Hard. Not only did we win every game, but we did so with a tremendous lead: our point differential is over 100, meaning on average we won by 7 points each game. Wow.

But I can’t be too over-confident; next week is the tournament and more often than not, top-ranked teams come into the brackets with a bye and lose their first game against a lower-ranked team who’s won their first round and is warmed up and hungry for victory. That’s what happened to my team last season, when we were also in first place during the season but lost in the tournament semi-finals (so did the second-place team). So I hope we do well and manage to snag some championship swag and bragging rights. 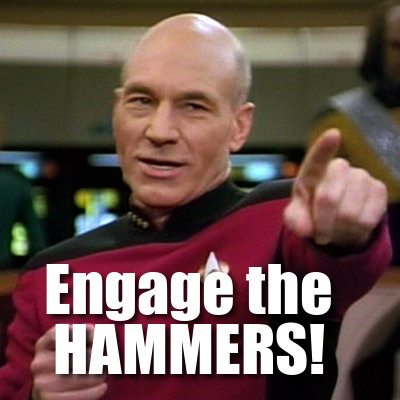