An insightful post by Jim Hightower, which exactly mirrors my feelings about the “economic stimulus package” on its way to all of us:

In a celebrated display of bipartisanship, both parties joined hands last month to pass a whopper of a stimulus package. Cash, they crowed, would soon be flowing. “We’re sending a $600 check to you, and $300 to you, and $1,200 to couples, and…well, almost everyone will get money! It’s manna straight from heaven to get our big ol’ economy high-ballin’ down Prosperity Highway,” they exulted.

“Not that there’s anything wrong with our economy,” they quickly added. “No, no,” said the self-congratulatory stimulators. “Everything’s fine. Really fine. Really.” In his State of the Union peroration, Bush insisted, “Americans can be confident about our economic growth.” Treasury Secretary Henry Paulsen chimed in, “The U.S. economy is fundamentally strong.” Buckshot Cheney came out of his bunker to assert that America has a “solid platform” for continued economic growth. And Condi Rice assured world leaders that our economy is “resilient, its structure sound, and its long-term economic fundamentals are healthy.”

Hmmm. If the basics of the economy are in such great shape, why would we need all this cheerleading by the wizards in charge? You don’t have to be in Who’s Who to know what’s what. They can whoop it up ’til they’re hoarse, but for most Americans, the kitchen-table fundamentals are nothing to cheer about.

Let’s say your check arrives and you drive straight to Wal-Mart to pick out some new clothes, an electronic gizmo you’ve been wanting, and a couple of toys for the kids. Pay your $300 to $600 and– listen!– you can almost hear the economic machinery kicking into gear, stimulated by your purchase of products.

But wait– we make very little of that stuff in America anymore. Those machinery noises are coming from China, where Wal-Mart and most other retailers have their goods made. Thus, our leaders are shipping billions of dollars from our public treasury to you and me, asking us to spend it in an economy that’s based on further enriching Wal-Mart’s wealthiest investors and further stimulating China’s massive export economy. How sound is that? Wal-Mart and China profit, but we don’t.

It’s amazing to me that stuff like this stimulus package even gets off the drawing board. But I guess it gives Congresspeople (who aren’t spending their own money here) something to point at when they’re up for re-election. “Look!” they can say, “I was one of the boneheads who voted to grab billions of dollars from our debt-ridden Treasury so you could have a little extra spending money!”

Although I dislike John McCain almost as much as the Bush/Cheney duo, I like his stance on the current mortgage crisis:

It is not the duty of government to bail out and reward those who act irresponsibly, whether they are big banks or small borrowers.

Amen! While Obama and Clinton are throwing around ideas about having the Gov pump $30 billion to help struggling homeowners faced with foreclosure or the banks who are regretting their hard-sell tactics of a few years ago, McCain is actually stepping up to say that those people (and companies) made some bad choices, and it’s not the job of the taxpayers to help them.

As someone who has paid his mortgage on time every month for the past twelve years, it irks me that others who are either irresponsible or just plain financial nincompoops might end up with a happy rainbow ending to their sad stories. They were suckered into something that sounded too good to be true or a house much bigger than they needed or whatever, and now they’re whining because they might have to face the music. Well, too bad, so sad. Although I empathize with them, if we don’t let them learn a hard lesson, what’s to stop them from doing it again? And again?

While politicians and bankers and Wall Street experts talk about different bailouts, I think it’s time someone stand up and say we need to let the market correct itself. If a business is too dumb to make good investments, then it should go under. That’s capitalism. Let the strong (and smart) survive, and let the weasels and incompetents fade away.

Zack lost his first tooth today. He was so excited he insisted that I take a picture of it. 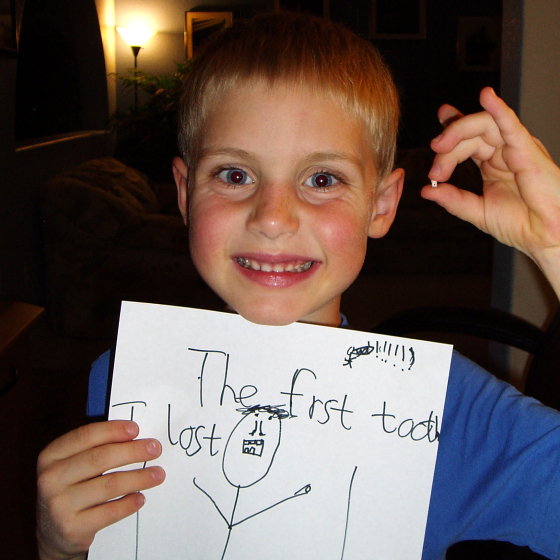 Of course he also had to make a little poster with the big announcement. Now he’s running upstairs to put it under his pillow and cash in.

Laralee was shopping the other day and happened to find a bargain bin of calendars (they’re always cheap in March!). She picked up a few puppy and kitten calendars for the kids, and an awesome one for me: 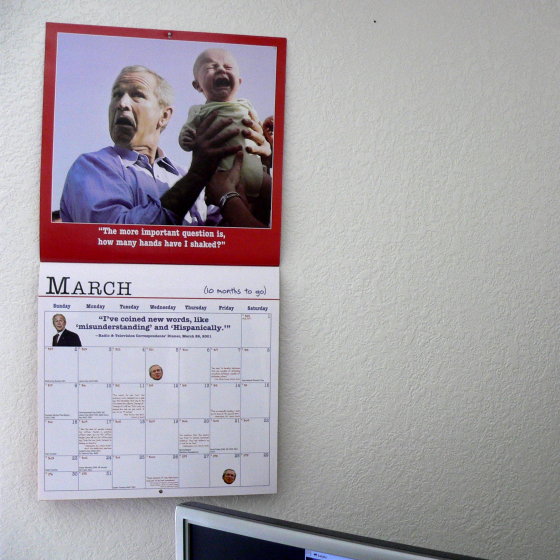 It’s called “The Out of Office Countdown” and includes memorable quotes from our beloved President, as well as a countdown of the number of days we will continue to endure him.

So Barack Obama gave an impassioned speech about race. People have mixed reactions about it (mostly positive, it seems) but the real news is that he wrote the entire thing himself.  No speechwriters, no campaign managers, no one but himself sitting up late at night putting the words together.  Apparently no sitting president or presidential candidate since Nixon has done such a thing.

I thought this was a great quote about it:

Here is a chair.  Regardless of who you support, or what you think of Obama, I want you to sit here, right here on this chair and consider something wonderful.  To wit: It is possible that we will have a President who not only will speak in full, complete sentences, but who will do so in a manner that is eloquent, and who will also be articulate and eloquent in delivering words he is intelligent enough to know, understand, and use in a speech he is capable of writing himself.

Here’s a fun beach to visit. 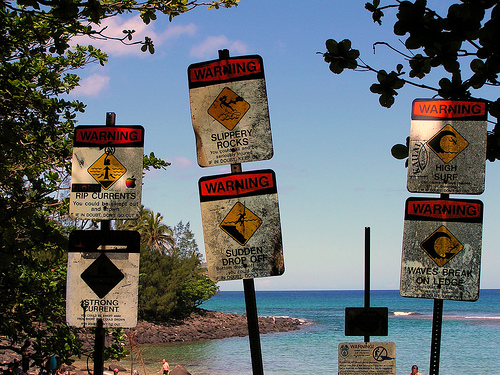 Zack shows off his latest schwag from my clients: this time it’s Annie’s Naturals, makers of those delicious little cheddar cheese bunny rabbits. 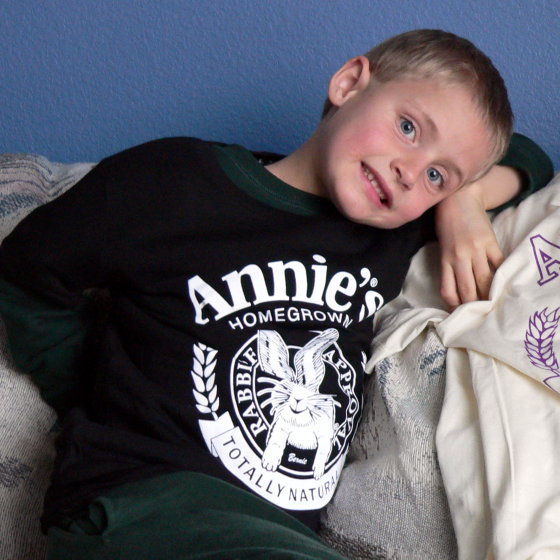 Kyra and Hannah decided that Pumpkin’s gerbil cage was just too restrictive, so they grabbed a bunch of cardboard boxes from our crawlspace and built a huge “playland” for her. The finished product isn’t pretty, but it’s big and Pumpkin seems to enjoy running around it (probably desperately searching for a way out). 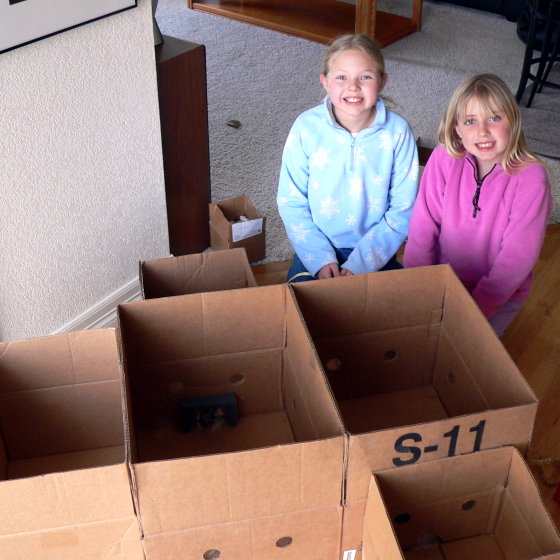 “I know all technology is actually run by magic gerbils.”

After five years of living in Longmont, I decided that the Builder White paint in our house was pretty dully, so it was time to paint some rooms. Laralee was supportive of the idea but didn’t really have any suggestions, so it was more or less up to me to figure out what rooms, what colors, yada yada.

In the end I decided that our family room really needed to be green. 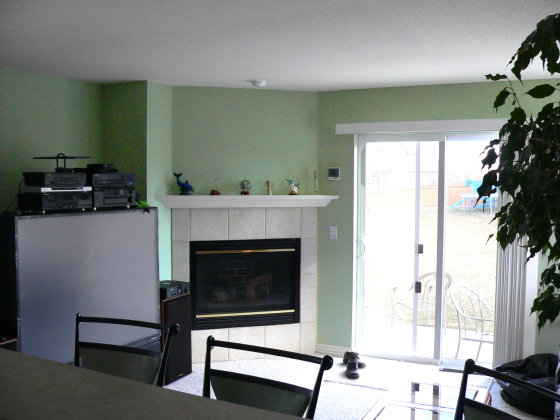 It looks pretty good– our barstools are green, and our ficus tree (barely visible here) goes well. The funny thing is I picked an “accent color” because that’s all the rage these days, but the colors are so close that it just looks like a trick of the light that one wall is darker. Dang paint swatches; it’s hard to tell when looking at a one-by-one inch square of color.

Blue seemed like a good color for the living room. 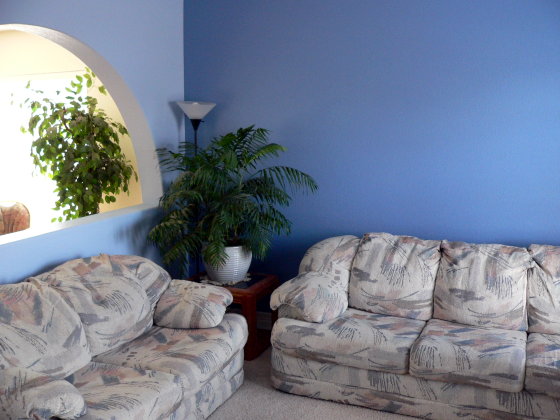 It’s really blue. Again, those paint swatches didn’t do justice to what an entire wall will look like. Thus, the living room reminds me of some aquatic adventure now. It’s a nice blue, but it’s a little overwhelming.

I suggested to Laralee that we get a huge plasma screen, hang it on the wall, and run a screensaver application of tropical fish. It’ll be like going to the city aquarium!