Today Craig called me to say he wasn’t going to make it to work. The conversation was sort of surreal…

Hey, it’s me. I wanted to let you know I had an accident while I was rock climbing today. I’m on the way to the hospital now…

Only later did I find out a rock had fallen, hit a ledge, and sliced his leg to ribbons. The cut was deep enough that you could see muscle tissue, and when he called back later (doped up on morphine) he said the muscle was actually hanging out of the cut at one point. Coooool.

Anyway, the good news is he’s going to be okay. I think he was secretly looking for an excuse to have a long weekend (combined with the holiday next week, he’ll score five days off). 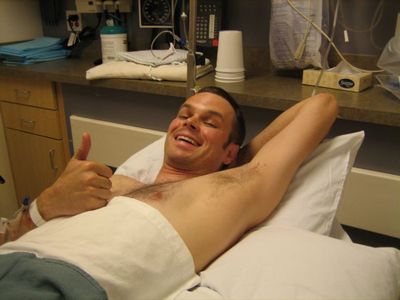 So Tuesday the NRO launched its latest super-secret spy satellite. Here’s a snippet from an AP article:

VANDENBERG AIR FORCE BASE, Calif. – A classified satellite for the National Reconnaissance Office was launched into space Tuesday night aboard a Boeing Delta 4 rocket. The purpose of the mission was not revealed.

It’s funny that some reporter would call the NRO to ask about it. One can just imagine how that conversation would have gone:

NRO: Hello, National Reconnaissance Office.
Reporter: Hello, I’m a reporter.
NRO: Splendid! How can we help you?
Reporter: I’m just wondering about that super-secret satellite you launched…
NRO: Yes?
Reporter: Did it enter its planned orbit?
NRO: You bet. Everything’s working great.
Reporter: Can you tell me what the satellite actually does?
(pause)
Reporter: Hello? 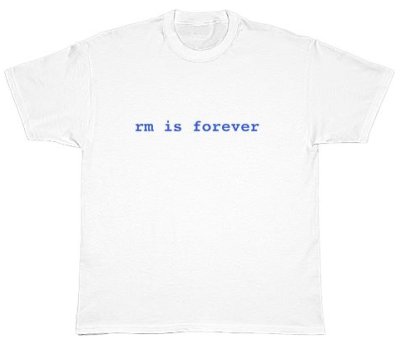 One wonders whether the photographer of this prom couple intentionally placed those flags. 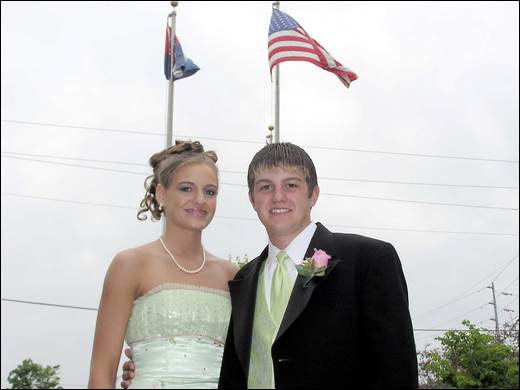 Speaking of desecrating the flag, here’s a great little picture of Bush autographing one: 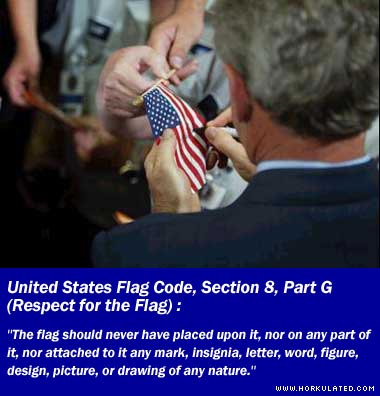 Thankfully, the Flag Desecration Amendment failed. Thirty-four patriotic Senators voted against the amendment, sending it to the showers for at least another year.

A couple of interesting quotes from the closing debate. First is Senator Bill Frist:

Countless men and women have died defending that flag. It is but a small humble act for us to defend it.

And then Senator Daniel Inouye:

Our country is unique because our dissidents have a voice. While I take offense at disrespect to the flag, I nonetheless believe it is my continued duty as a veteran, as an American citizen, and as a United States Senator to defend the Constitutional right of protesters to use the flag in nonviolent speech.

Amen, Senator. I should note that Inouye lost his right arm in combat during World War II and was later awarded the Medal of Honor. A patriot indeed.

Our trampoline is falling apart.

After seven years or so, some of the springs are tearing out of the fabric. Once a few of them go, the strain on their neighbors is too high and a ripple effect takes out the rest of the rim. So we’ve told the kids not to jump on it until we can get it fixed (which may involve buying a new mat).

The funny side effect of this is we haven’t had an army of neighborhood kids in our back yard for the past few days. The trampoline is typically the center of their games– they’re bouncing on it, playing dodgeball, sitting under it in the shade, or just sitting atop it having a popsicle and talking about whatever kids their age do. Without it, I guess they don’t have much to do.

I still maintain it was the best $200 we ever spent. Hopefully we’ll fix it soon.

My friend Derek quoted an article in the National Review that condemned the New York Times for “exposing” the SWIFT monitoring program. I wrote him a lengthy response, some of which I’ve included here…

When the Gov says certain things– like monitoring banking transactions, in this case– should be secret, I roll my eyes. Anyone with the brains of cabbage would realize by now that the feds have been watching money flowing around the world. To prove my point, I actually did some (take a deep breath) research. In December 2002 the United Nations released a report containing this paragraph:

Other groups, ranging from Taliban monitoring agencies to MIT graduate students, have either postulated that the U.S. was watching SWIFT, or had ample evidence that it was actually happening. In this sense, the expose by the Times (and other newspapers) wasn’t revelational or even that surprising. Consider Bush himself, who said this while campaigning in 2004:

Before September the 11th, law enforcement could more easily obtain business and financial records of white-collar criminals than of suspected terrorists. See, part of the way to make sure that we catch terrorists is we chase money trails.

This was part of a rah-rah speech about the PATRIOT Act, and he all but told the terrorists he was watching their money. Two days ago, he said the Times article did “great harm” to the U.S. Doesn’t it seem to be a bit of a double standard for Bush to talk about tracking money, but for him to condemn a reporter for doing the same?

Some of the criticism being leveled at the Times and Co. has been that the articles they’ve been publishing– the SWIFT one as well as the past wiretapping exercise and others– are somehow aiding the terrorists by telling them what the U.S. is watching. Give me a break. I’m sure there are dumb terrorists in the world, but the smart ones already knew things like phone calls and banking transactions were being monitored. At a minimum they realize that even if they aren’t being actively watched, the Gov can swoop in at any time and demand records. We’ve seen how THAT turns out, to the great shame of several telecommunications companies.

When he blows secrets, Keller gets more attention– and presumably more business– for his newspaper.

I won’t argue that. There’s undoubtably a financial motive for the Times‘ publication of articles like these. But I’d like to believe there’s also another motive: exposing the truth for public comment. That’s an integral part of democracy– transparency of the government, so the people can understand (and have healthy debate) about what is or isn’t being done on their behalf. Remember always that the government exists to serve the people, not the other way around. There SHOULD be accountability for breaches of privacy, for sidestepping the law, for pursuing questionable agendas. To believe that the Gov is always right, and will always pursue its plans with our best interests in mind, is mind-bogglingly obtuse.

Allow me to quote Thomas Jefferson:

Our first object should therefore be, to leave open all the avenues of truth. The most effectual hitherto found is freedom of the press. It is, therefore, the first shut up by those who fear the investigation of their actions.

He, as well as the other framers of the Constitution, WANTED the press to investigate the government. It was clearly the intent of the First Amendment to allow the press to always distrust the Gov, and vice versa, because only through this mutual dog-fighting does the system maintain balance. If the Gov was allowed to pursue things in complete secrecy, there would be no accountability and there would be no limit on the possibility of abuse. And again I maintain that to believe the government would not abuse its power is obtuse.

… In choosing government without newspapers or newspapers without government, I should not hesitate for a moment to prefer the latter.

Recall that he and his compatriots were designing the American government specifically to avoid the abuses the British government had levied upon them. They WANTED, very much, for the government to have a system of checks and balances– and even more checks and balances outside the government (i.e., the press). It is a telling sign that the Bush administration and their apologists want to remove the freedom of the press in cases like this because they fear that too much is being exposed.

The closing of the National Review article includes this:

The reporters who wrote about it, Eric Lichtblau and James Risen, should be subpoenaed, and if they refuse to reveal their sources, they should go to jail.

To me, this is the very antithesis of a free press. To imprison a journalist for telling the truth– particularly on a matter of public concern and one that isn’t terribly secret– is taking a step into dangerous territory. It’s saying the government can do whatever it wants, without question or oversight, and those who dare to stand up and ask should be locked away.

I for one don’t trust my government. At all. And to those who do, I say they should examine very closely the events of the past four years, thinking about the abuses we’ve learned about as well as those which are doubtless happening now but cloaked in secrecy. We need more exposes; we need more reporters like those at the Times.

I found this awesome set of images to compare Earth with other celestial objects. Too bad I didn’t have this a few months ago when Laralee and I taught the second-graders about the solar system– it helps put things in perspective. 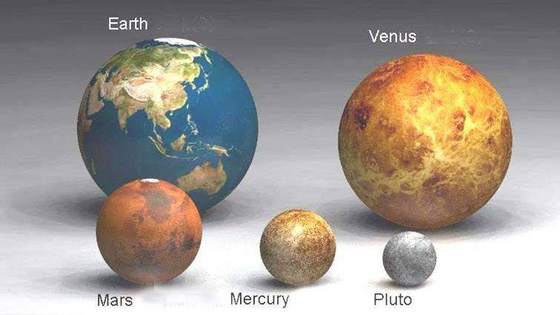 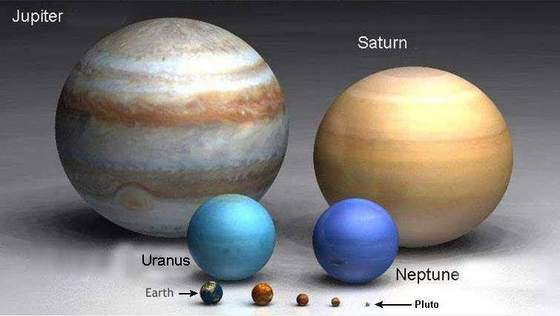 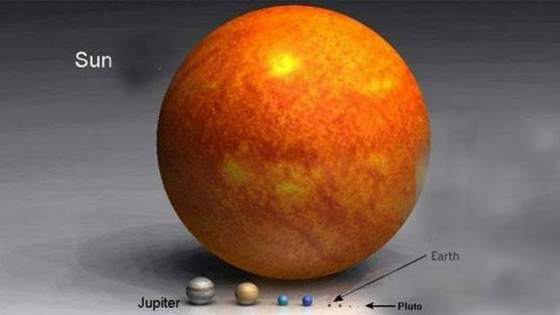 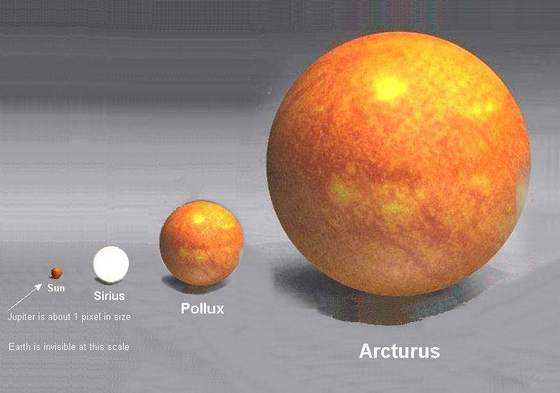 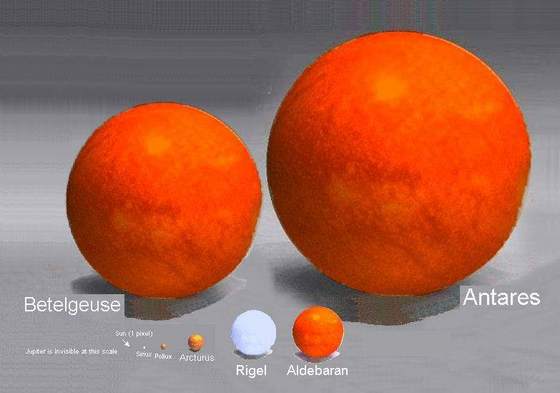 In a move that probably shocked no one, the New York Times has now been labeled “disgraceful” and “treasonous” because they dared to expose yet another secret spying operation launched by the Bush administration. Rep. Peter King, the chairman of the House Homeland Security Committee, told the Associated Press that the Times should not have reported on the SWIFT database snooping that’s been happening for the past four and a half years. Bush also condemned the report, using such wise words as:

Apparently he is still under the deluded impression we can ever “win” a war against an ideology, not to mention his tired but oft-used reference to mysterious Bad Guys who are looking to hurt us. He continues to believe he has infinite jurisdiction in private transactions as long as it’s being done “to fight the terr’ists”.

I always thought we had a free press specifically so the government can’t run roughshod over everything– it’s just another piece of the checks and balances that keep our country from becoming a fascist police state.

Just another step… we’re getting closer.