Today I was building a new computer for a client. As I installed the RAM sticks and the SSD drive, and applied thermal grease to the CPU before gently seating it on the motherboard, I reflected on how cool the guts of computers are.

Ever since I can remember, I’ve been fascinated by what makes these machines tick. Our trusty old Apple IIe, circa 1984, was a great learning tool. I installed what was then called an “80-column card” because it doubled the horizontal resolution of the computer from 40 columns of green-screen text to an astounding 80 columns. Wow, word processing became a whole different game. More to the point, the 80-column card 64kB of expansion RAM, which brought the total onboard memory to a whopping 128kB. Although these days a single email message wouldn’t fit in that space, back then it was a luxury.

From there I bought an Apple IIgs and outfitted it with some extra memory. I think that one came stock with 128kB, so of course I needed to double it to an amazing 256kB. Then it was my first IBM clone– all desktop computers were called “IBM clones” because they were based on the 8086 instruction set (I think). My first upgrade to that machine was trading the 386-33MHz processor for a shiny new 486-66MHz, which I bought from my friend Chad for $400 because he wanted to upgrade his computer to something like 100MHz. Wow.

Over the years, I bought parts and built computers. I knew what plugged into what, and I knew where to get the best stuff for the lowest price. I remember math co-processors and the “turbo” button. I remember modems that sat on your desk with a half-dozen blinking status lights and a reassuring mix of screaming and static as they negotiated the 14kbps phone connection. I remember 40MB hard drives that were huge (both in bytes and physically). Downloading software from a BBS? Check. WordPerfect– in text mode– yep. 4MB of RAM for hundreds of dollars, a confusing array of memory types, parallel ports, serial ports, IDE… all of that is ingrained in my geeky memory.

A few years ago I was talking to some friends of mine who are really good software developers. They had no clue how the inside of a computer worked. They’d never plugged in a hard drive or replaced the RAM or upgraded a CPU. They just bought their computers as a unit, never balancing speed and cost by picking out just the right components. I was astounded. I guess I thought everyone who programmed computers would know how to build computers. But then again, I drive a car every day and don’t know the difference between transmission fluid and brake fluid. I suppose it’s just happenstance that I know both the hardware and the software side of computing.

Anyway, I’ve always enjoyed mucking around in the guts of the computers I use, and I find the intricate little components to be amazing examples of engineering and design. So, without further ado, I give you some pictures of the guts of my latest computer. 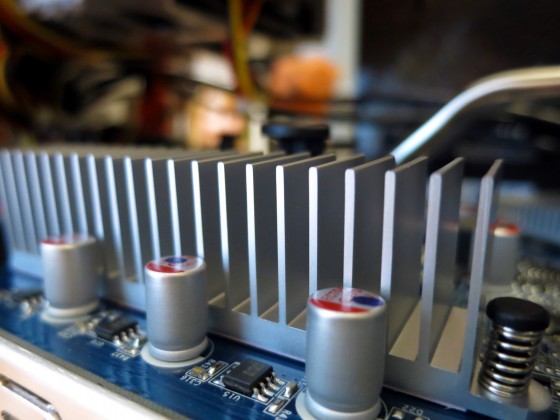 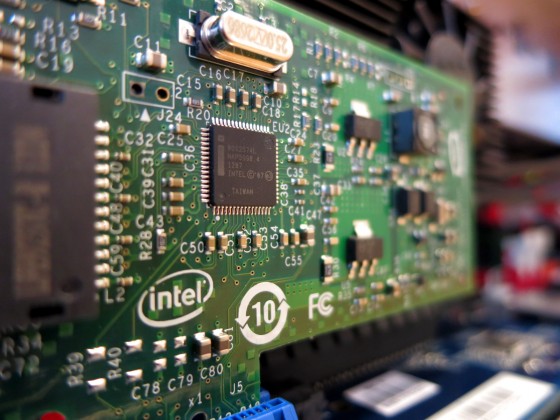 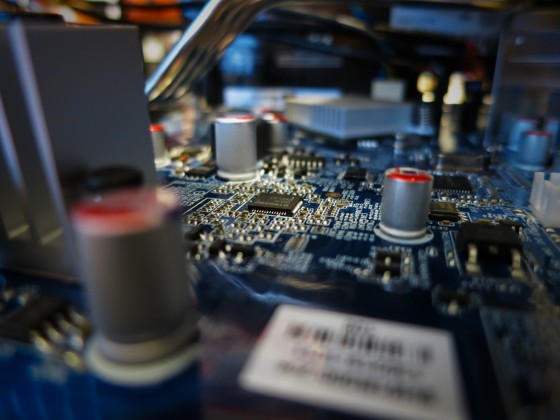 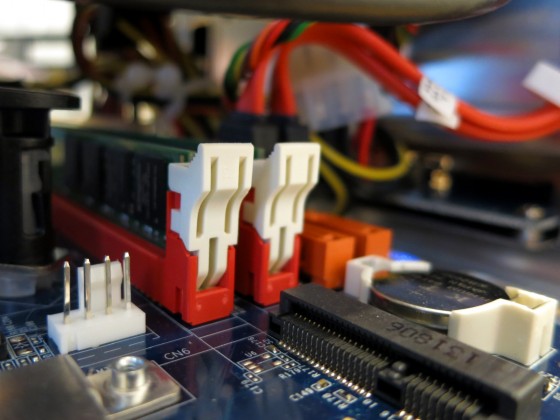 Just for fun, I dug out some old parts from my closet. Some of these shocked even me. 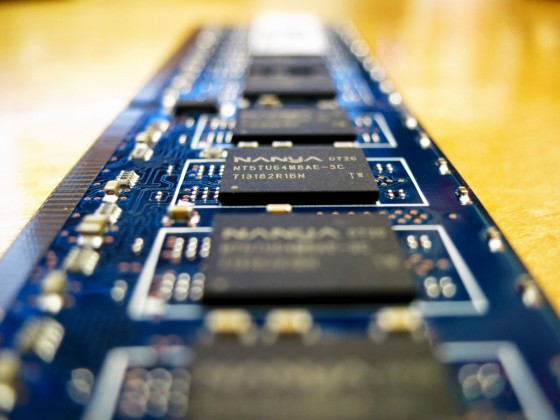 An old 56k modem, complete with jumpers used to set the COM ports. Man, those were some good times. 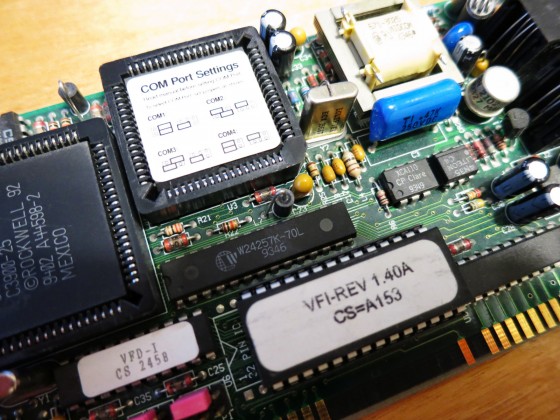 Then, way in the back, covered in a fine layer of dust, sat an old manila envelope that contained the oldest piece of my computer history. It was the original 386-33 motherboard I mentioned above. This thing is truly a relic– it dates back to 1991 or so, and looking at the components reminded me of the stuff we used back then.

Forget PCI– this thing only had ISA slots (eight of them): 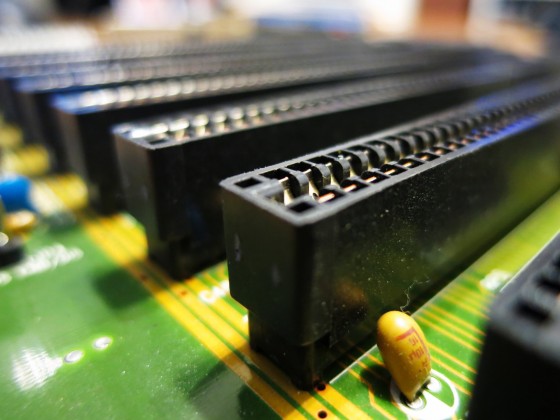 There are also eight banks for RAM, and I believe each bank could only support 1MB: 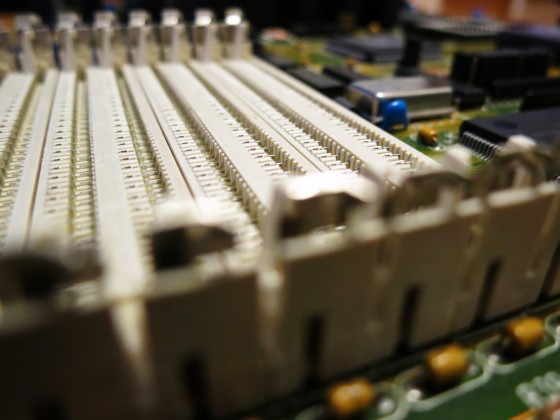 And finally, the amazing centerpiece of this motherboard: the original Intel 386-33 CPU: 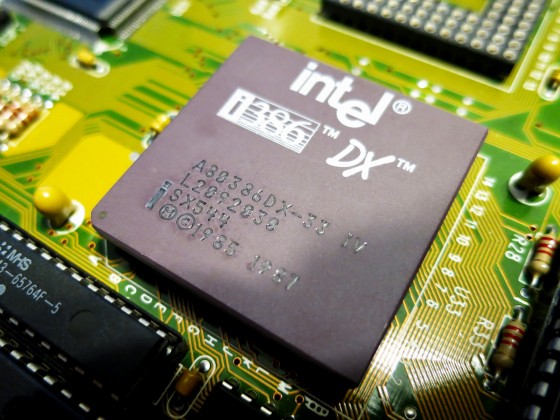 What a fun trip down memory lane. We’ve sure come a long way.

Uline: the company that won’t give up

I’d guess it was twelve years ago when I ordered a set of fifty cardboard CD carriers, suitable for shipping CD’s or DVD’s in the mail. I did it because every now and then a client wanted a bunch of backup data sent to them. Over the years, I used about half of the boxes, and eventually bandwidth and storage caught up and it became easier to ship huge files and backups via the web.

The company I ordered them from is called Uline. They have a massive paper catalog that weighs in with over 600 pages, showing all of their packaging materials (cardboard CD carriers are somewhere in there). For some reason I can’t fathom, they send me the catalog roughly four times a year. Today I found the latest one in the mailbox. 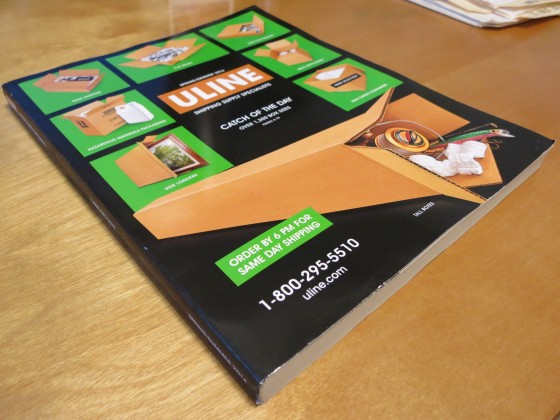 As with all the others, it went straight into the recycling bin. I really don’t understand why (1) they use a paper catalog at all, since it’s far easier to search for things like this on a web site, and (2) they continue to send me an arguably expensive mailing every three months for twelve years. Sure, if I’d ordered from them every few months, or even more than once, I could understand they’d like to keep in touch. But I placed one order twelve years ago, and that’s it.

One wonders how they justify the cost of these mailings, comparing the price to send me almost fifty of them over the course of more than a decade against the $16 or whatever I spent on my original order…

I’ve been buying computer parts from Newegg since the late 1990’s, when they were an obscure (but amazing) company. Now they’re not so obscure, and they continue to be amazing. I placed an order for a couple of computers for a client this morning, and I just received a notification that the parts have shipped. In truth, this means they’re boxed and scanned and ready to go on the truck, but still… a turnaround time of five hours to have it out the door is quite impressive.

Thanks, Newegg, for 16 years of good geeky stuff.

One of my clients just sent a payment… on a Spongebob Squarepants check. Nice! 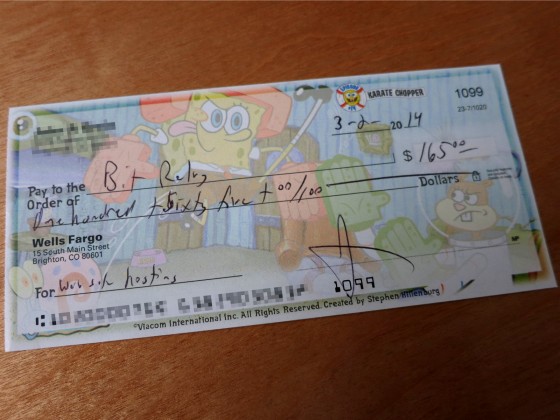 The latest job applicant claims to be an expert in Web 2.0.

Is Web 2.0 even a thing any more? I loved it when it first came out a few years ago… well, technically, there was nothing to “come out” at all. It’s just a concept, like “cloud”, that marketing people throw around but which has no substance behind it.

At Zing we joked about putting a big seal on our company home page saying Zing is “Web 2.0 Certified”. Anyone who knows something about web development would get a good laugh from it, and anyone who doesn’t would think it’s pretty impressive. But to see it on a resume from a job applicant… hmm…

A boy with big ideas

Today I was walking to school with Zack, and he mentioned that when he has his own house, he’s going to install a vending machine.

Me: A vending machine?
Zack: Yeah, you know, for snacks and stuff.
Me: Why would you want to charge yourself for snacks?
Zack: It wouldn’t be for me. It would be for guests.

Here’s a kid who’s a born entrepreneur… or at least someone looking for a way to make a buck.

Zing is hiring again, which means the flood of completely unqualified people, off-shore development firms, and recruiters are all contacting me… despite very clear language in our job post that says they’re just wasting their time and mine.

Today I received a resume from someone who might be qualified, but it’s hard to tell when I open it and see this: 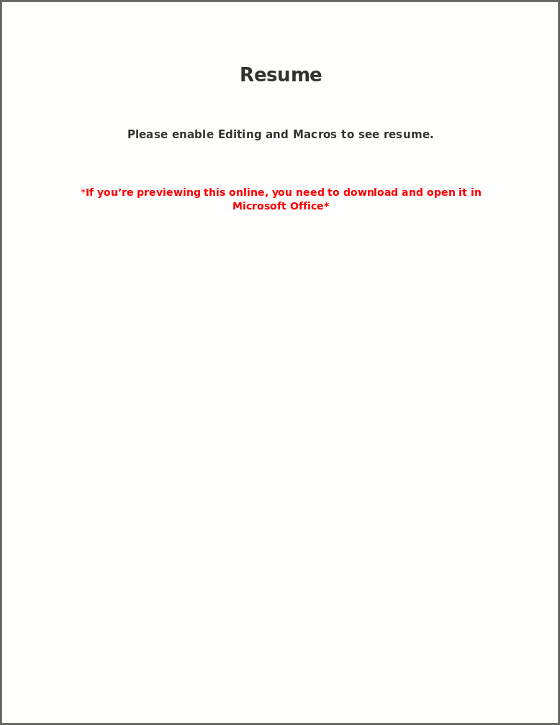 I don’t have Microsoft Office, of course, and LibreOffice disables macros by default. I’m pretty sure that I don’t want to see a resume that requires macros in order to even be visible.

Last night there was a youth talent show at church, where any of the teenagers could put on an act. Some sang, some danced, and then there was the Happy Hands Club. 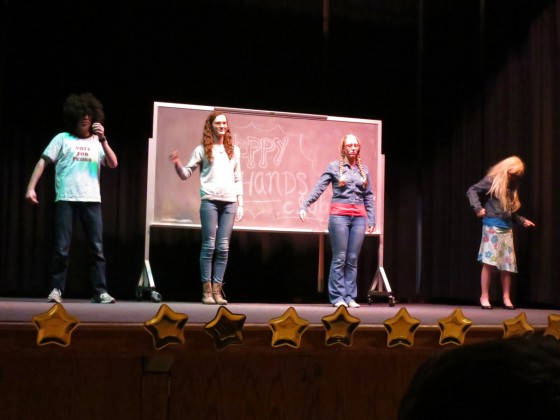 From the left, that’s Alex as Napoleon Dynamite, complete with the afro, nerd glasses, and the all-important “Vote for Pedro” shirt. Then we have McKenna and Kyra, both taking this very seriously. And the cute blonde on the right? Yep, that’s Zack.

As the curtains opened and they started their sign-language routine, someone leaned over to me in the audience and asked who it was on the right– she didn’t recognize the teen. I explained that it was Zack, and she was surprised. “How did you get him to dress in drag?” Well, he actually asked if he could be part of the troupe.

Anyway, it was absolutely hilarious, including the fact that the three on the right were (mostly) in sync while Napoleon was just slightly off. When the song ended, Napoleon suddenly ran off the stage in classic style.

One of my clients is having some trouble uploading a spreadsheet file into the web system I built. I asked her to send me the file so I could look at it and, if necessary, do a test upload to pinpoint the problem.

Imagine my surprise when she replied with:

I’ll send you the info and let you research.  Do you have a fax number?

Umm, a fax? Apparently she’s going to print the spreadsheet to paper and fax it to me, whereupon I’ll presumably create a new spreadsheet, enter the data, and load it into the web system.

I got a chuckle out of this one. 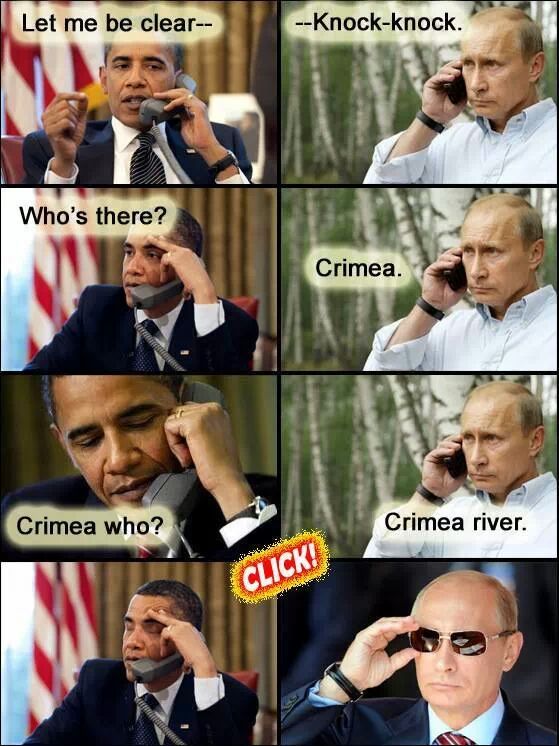 Laralee doesn’t keep up on current events, so I had to explain it to her. I guess she didn’t think it was quite as funny.