Alex came home from martial arts the other night, walking in the door and saying to me in an excited voice, “Dad, guess what I did at martial arts tonight?” I couldn’t guess, so he told me: “I got shocked with a stun gun!”

It was funny that he was so excited about it. He’s in a self-defense class where they practice moves intended to break free of attackers. Having joined him for a few of the classes in the past, I know they don’t mess around– they throw each other to the mat and only moderately hold back their kicks and whatnot. Apparently one of the instructors brought a live stun gun to the class and showed it to the students. After class, Alex was talking to him about it and he asked if Alex wanted to see what it felt like. Of course! Alex said he was stunned on the arm, and it was a jolt and some tingling afterward but “not like being tased”. Now I guess I should wonder how Alex knows what tasing feels like…

Last night we went to see Jurassic World. Heck, we enjoyed the original Jurassic Park twenty years ago and despite the lackluster sequels, it seemed like this new movie would be a lot of fun.

After dropping fifty bucks for tickets, we found out that “a lot of fun” meant a ton of impressive special effects wrapped around a story so filled with problems that it was laughable. Although I haven’t seen Pacific Rim, often held up as the pinnacle of movies which are all action and no plot, I imagine it was something like Jurassic World except with more robots.

As the T-Rex roared in the final scene (surprise!) and the credits started to roll, my only comment was “This movie is going to make a billion dollars.” They were halfway after just the first two days on screen, so I imagine this will be one of the highest-grossing movies of all time within a matter of weeks.

We literally spent our thirty-minute drive home picking out all of the plot holes and bad decisions throughout the movie. It was fun (and funny). In the end, I must say the movie was entertaining but only in the way that a slow-motion train wreck is entertaining… 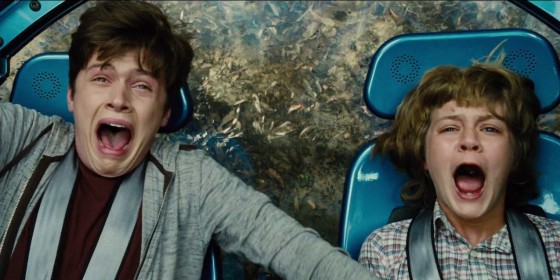 Today was the day after the solstice, and a perfect evening for the summer ultimate league. We played our usual double-header, winning the first and losing the second, but had a really great time. The weather was absolutely gorgeous: not too hot, not too cool, the slightest of breezes, and a fantastic Colorado sunset over the mountains. We played until 8:30, although we could easily have continued until 8:45 with the light. Afterward I headed over to the Pub to hang out with friends for a few hours.

I think this is my sixteenth summer playing ultimate in GRU. Ahh, good times.

Our thermometer apparently thinks we’re in Tucson or something: 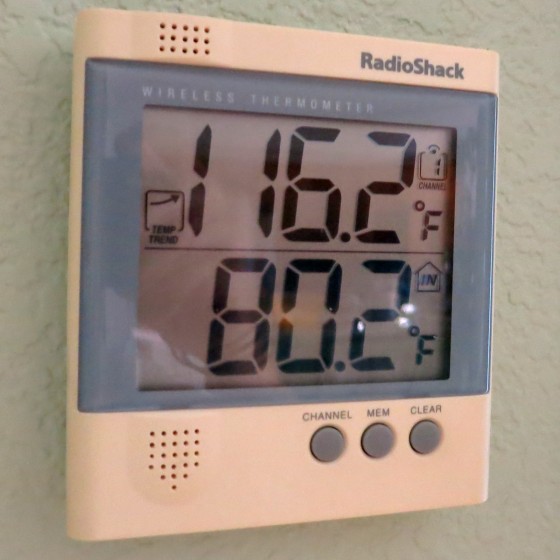 Well, it’s happening. I just received a letter from State Farm informing me about their “In-Drive” program. Like many car insurance companies these days, they’re offering a 5% discount on insurance rates if I submit to 24/7 monitoring of my driving. They’ll send me a device that I install in my car; it’s a combination GPS receiver and transmitter that informs my State Farm overlords where I am at all times.

Obviously the intention is to monitor my habits and find out how often I exceed the speed limit, and so forth. But I have grave concerns about the abuse of this technology. No networked devices are safe from attack, and it’s only a matter of time before malicious players figure out how to access car location data. The most obvious purpose would be to know when I’m not at home so a simple home burglary could be committed, but it seems to be that’s just the tip of the iceberg. And don’t even get me started about how government agencies can use– err, I mean abuse– location data on millions of citizens.

At this point In-Drive is an optional program, but I know that it’s only a matter of time before it’s required by all insurance carriers. Ugh. 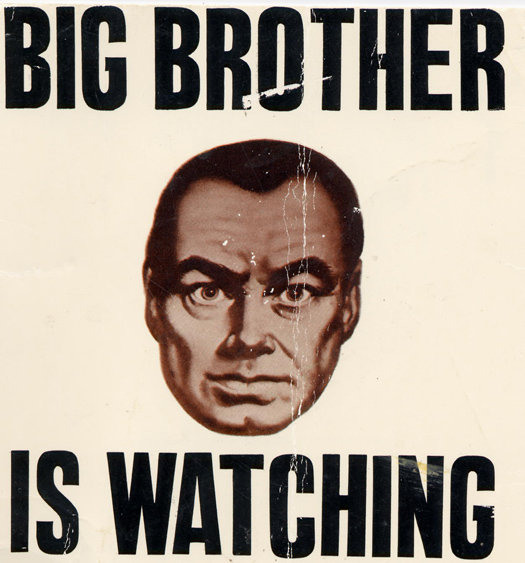 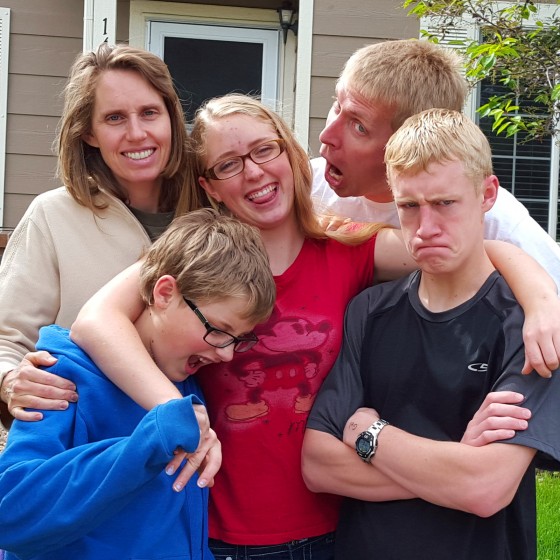 This year for the Boy Scout “high adventure” trip, Zack’s troop went up to Wyoming for a week-long canoe trip on the North Platte River. I couldn’t go all week, so I joined the crew for two days.

It started Thursday afternoon as I drove a few hundred miles to the campsite where they’d put out for the day. It was like an old-fashioned road trip: windows down, wind blowing, music blasting. Woo hoo! 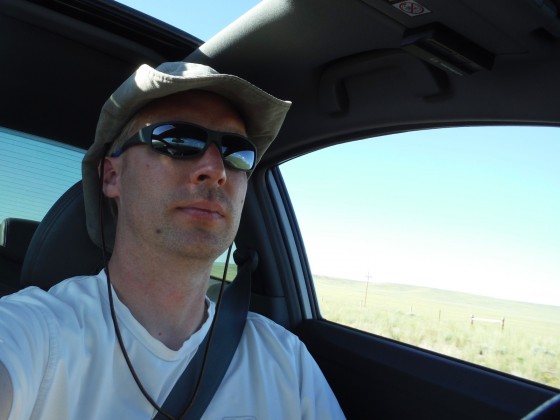 Wyoming is quite scenic in parts, but most of the southern half is rolling hills. It was a beautiful sunny day. 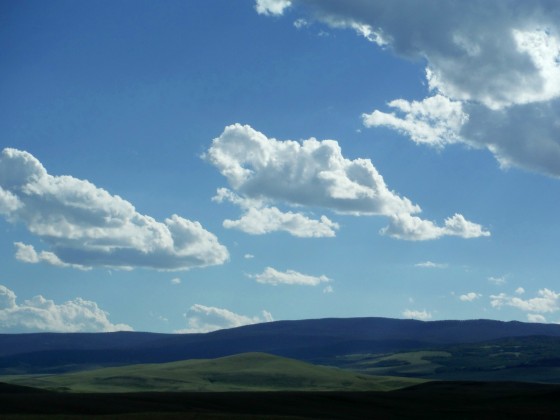 I arrived at camp, unpacked my stuff, and settled in for the evening. Some of the boys decided to prove their manliness with contests of strength. There were a few arm-wrestling bouts, and then they decided to work on stick pulling. Ahh, just like the good ol’ days of pioneer lads who didn’t have cell phone apps to keep them occupied in the evenings. 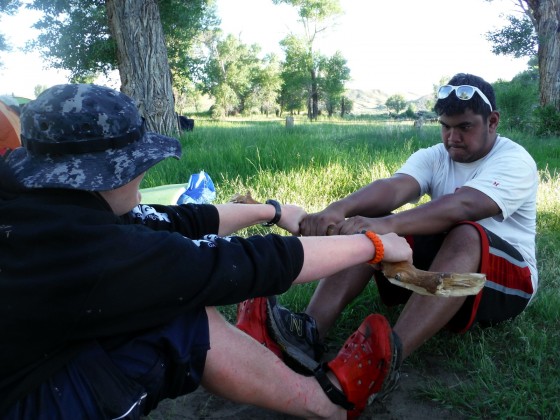 Zack and a few others picked up fishing rods and worked on their technique. Zack didn’t catch anything, but one of the boys and one of the men did. 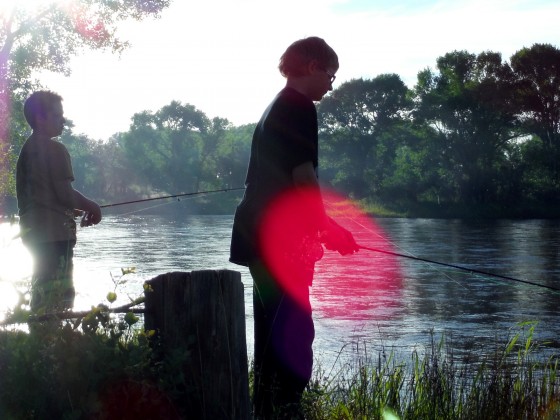 Of course we had a campfire, and sat around playing a few games and talking. 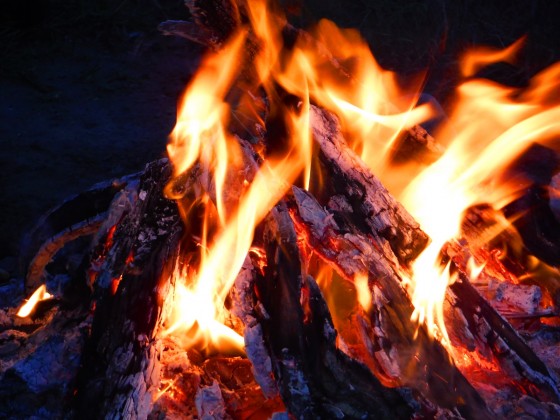 Friday morning we rolled out of our tents at 6am sharp (it had been light since around 4:30). It took some of the boys a while to get ready, mostly because their breakfast was stuff like pancakes and scrambled eggs. I just munched on some dry cereal, of course. We finally hit the river around 7:30 at the start of a crisp, clear day. 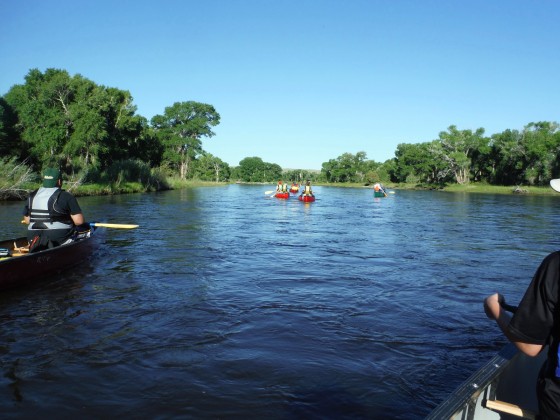 Our little flotilla of eight canoes started out strong, but after about half an hour had divided into two groups of four. Zack and I were in the front group, powering down the river for a while. After paddling for a bit we realized we were far ahead and didn’t really need to be, so we ended up just drifting lazily with the current. It was nice.

By late morning the sun was starting to beat down from the cloudless sky. I was glad I’d lathered on sunscreen before setting out. Zack had done so as well, but on the first day he’d burned the tops of his legs a bit (I think most of the boys had) so he was feeling the heat on them. He’d scoop up some water from the river and trickle it across his legs. The water was about 45 degrees, so even though the day was heating up, it wasn’t quite swimming weather.

We saw a lot of wildlife: mule deer, antelope, beavers, ducks, and a lot of different birds. There were four huge owls who took off from the banks and soared over the river. We also saw many bald eagles: I think I counted six, and Zack said he’d seen several each day the previous days. Their nests were typically in tall trees right along the river, and we’d see them circling high above. My camera wasn’t great at capturing them, but here’s a shot of one watching us from a tree: 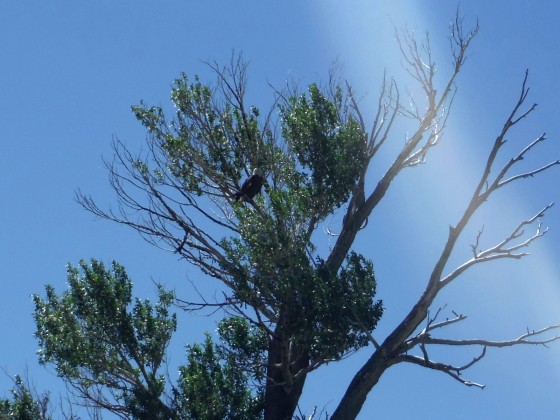 It was relaxing to just float down the river, paddling occasionally to correct our heading or stay in formation with the other three canoes in our group. All of us talked, joked, and shared riddles– one of the riddles took about an hour to figure out, but as there wasn’t really anything else to do, we all played along. 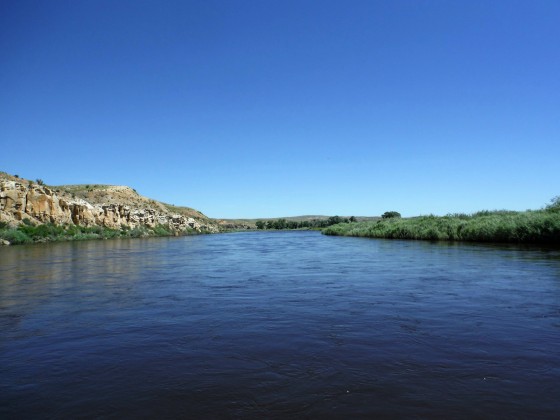 Here Zack demonstrates the proper technique for being in position to fall off the bow and be run over by the canoe: 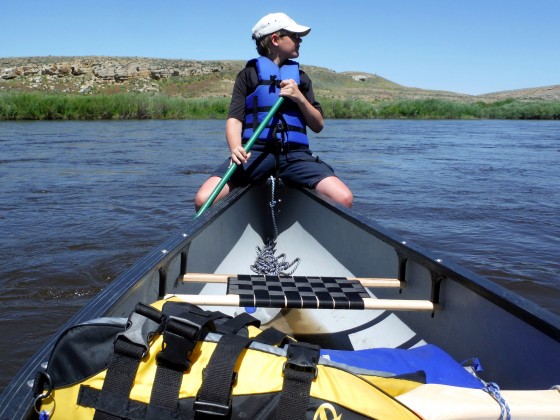 Around noon the wind started to pick up (hey, it’s Wyoming) and pushed against us at around 25mph. Since the current was flowing at a leisurely 3-4mph, we basically didn’t make any forward progress without paddling hard. If we stopped paddling, the wind would quickly turn our boat and push us to shore. That started to wear on the boys a bit– we were hungry, hot, and getting tired. We stopped for lunch and sheltered behind some bushes to eat before striking out again.

As we wound around bends in the river, the wind would come at us from different directions, so at times it was nice to have it at our backs, although a little while later it would be gusting in our faces.

We reached our take-out point around 2pm and by then most of the boys (and some of the leaders) were worn out. We’d traveled nearly 30 miles on the river for the day– not too bad!

After stowing our gear, we had a little barbecue at a rest area along I-80 and then drove back to Longmont. It was fun to spend a couple of days with Zack and the boys, and I hadn’t been canoeing since college so I enjoyed a day of poking around the river. Good times all around.

Alex just received a letter from church headquarters about his mission assignment. 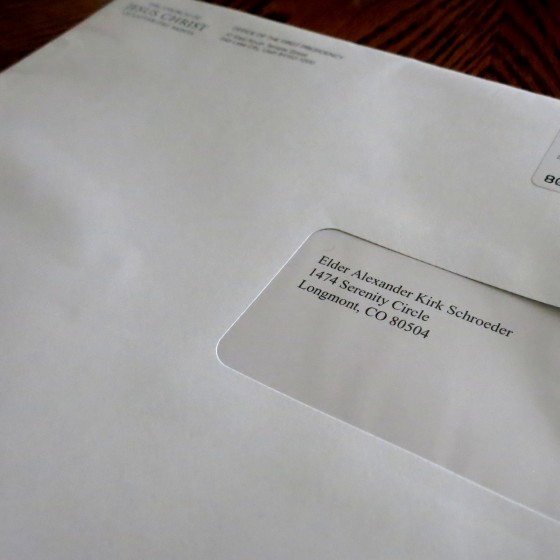 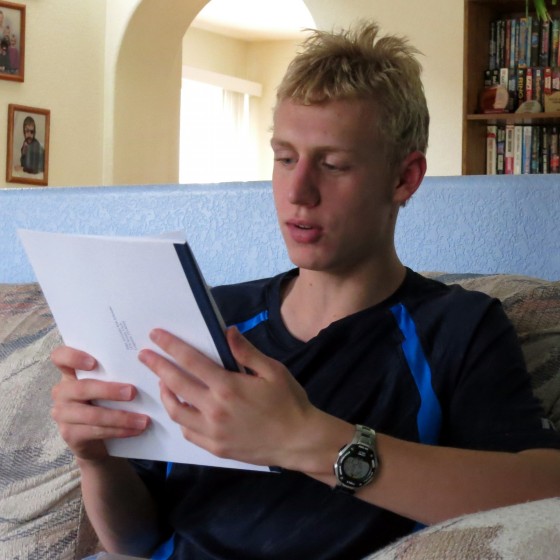 And the winner is… Lima, Peru! He’ll leave October 6 and spend two years there, speaking Spanish and sharing the gospel with the people of Peru. Way to go Alex!

Kyra came back from Girls’ Camp last night, and her hair had been in a braided bun for about two days. She undid the braids today and the result was impressive: 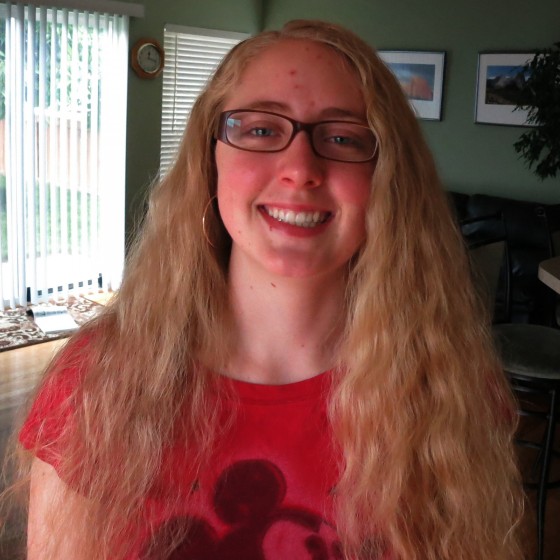 I told her to whip her head around a bit because her hair was so big. The camera couldn’t catch it very well, but these pictures give an idea of just how frizzy and huge her hair was this morning. 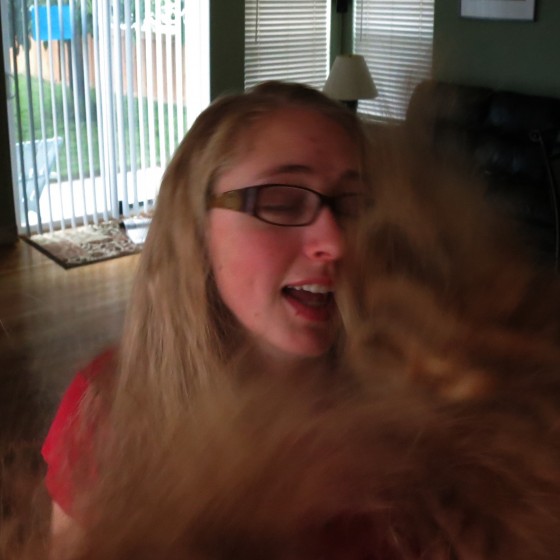 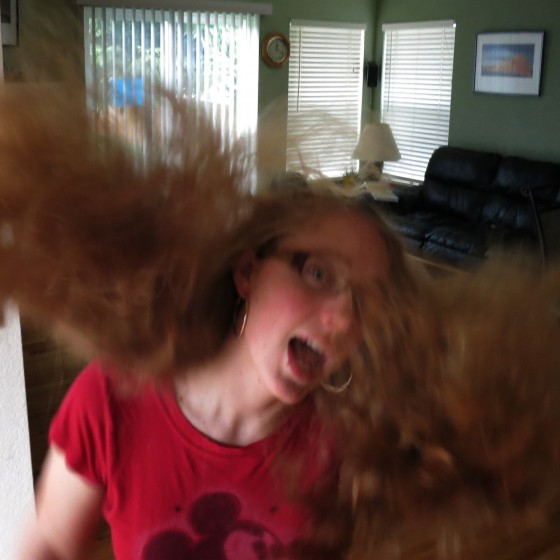 Personally, I love her beautiful long blond tresses. When she has them in a braid overnight, it’s funny how big her hair can get the next morning. I keep asking Laralee to let her hair grow out, but she refuses to let it get past her shoulders. Oh well.

Last week we had some crazy weather… well, okay, we’ve been having crazy weather for almost two months now, but last week there was a particularly rough evening when the rain and thunderstorms hit. We were sitting around in the house and heard a terrific flash-BANG where a huge crack of thunder immediately followed the flash of lightning. We all jumped, laughed a bit, and then I headed out with Zack to a Scout activity.

A few minutes later, with the Scouts, I saw a bunch of fire trucks zoom past with their sirens blaring. Curious.

Later, when I returned home, I found out that the trucks rolled onto my street and took a peek at the house across the street from us: 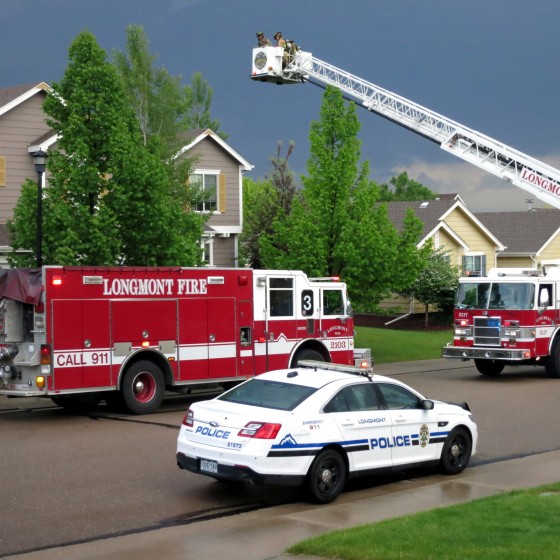 Laralee took this photo from our front yard as she watched the hook-and-ladder truck lift up a firefighter to inspect the roof. Apparently the lightning we’d heard a little while earlier had struck the top of the house. Nothing was damaged and no one was hurt, but that was a close call…