This graphic really doesn’t need any more commentary from me.

Ho ho ho! Chalk up another successful Christmas for the Schroeder Clan.

It all began on Christmas Eve with a night of heavy drinking:

After the kids went to bed, the stockings were stuffed and a few last presents placed under the tree. This year seemed to have a bigger pile than I remember in the past, which of course was quite all right with the kids. 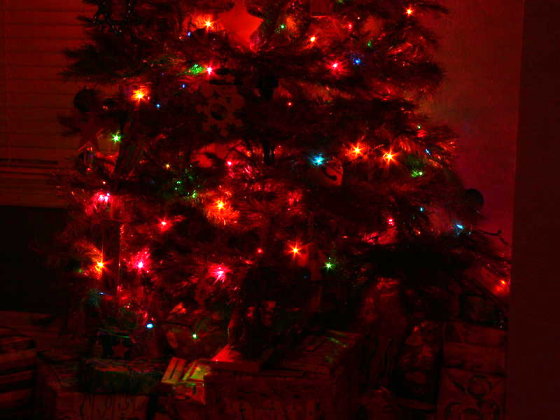 (This is a highly enhanced photo I took in the dark– it didn’t turn out quite as well as I’d hoped.)

On Christmas Day, Laralee and I managed to stay in bed until almost 8:00 before the kids started screaming for us to get our lazy butts downstairs. They’d already sorted everything into piles and picked spots to open gifts, of course.

Kyra loved the fuzzy knee-high socks she found in her stocking: 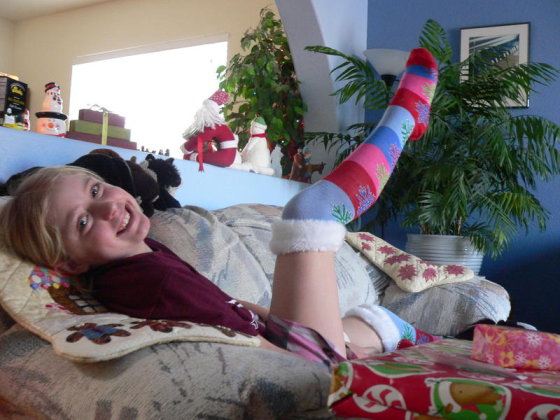 Lego Bionicles are always a hit with the boys. 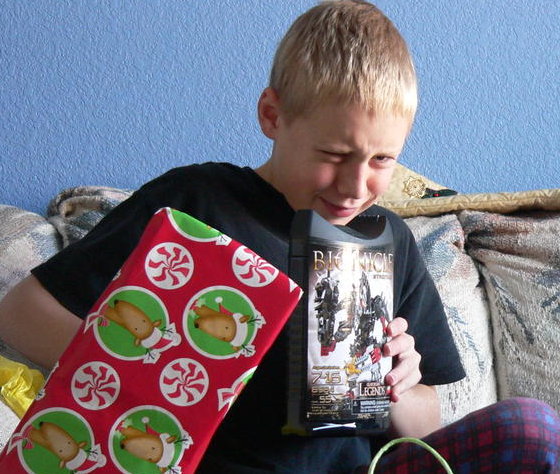 (Alex isn’t unhappy about the gift– he’s doing his impression of the big bad Bionicle guy on the box.)

It turns out 2009 was the Year of the Blankets. Laralee has an old ratty throw blanket that must be fifteen years old and is frayed and full of holes, so I decided it was time to get her a replacement. Normally she and I don’t get each other gifts (for any occasion) but this time I told her it was something she really needed. 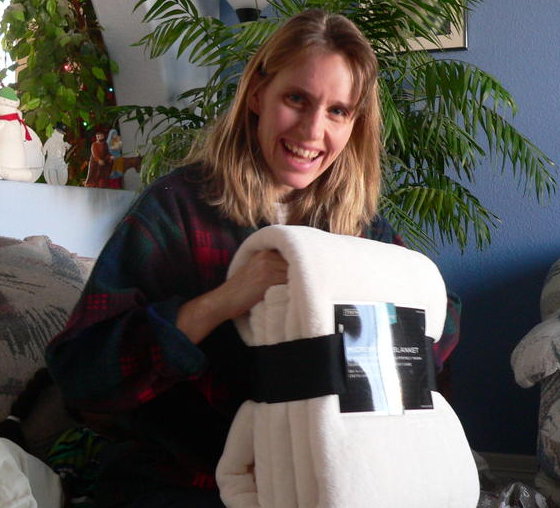 (In a similar show of practicality, her gift to me was a pair of pot holders.)

This was the first of three blankets: another nice fleece throw from Kathy, and an outdoor down blanket from Mom. Luckily we have three places in the house where blankets are needed, so now we’re all set!

I picked up a couple of fun Christmas ties: 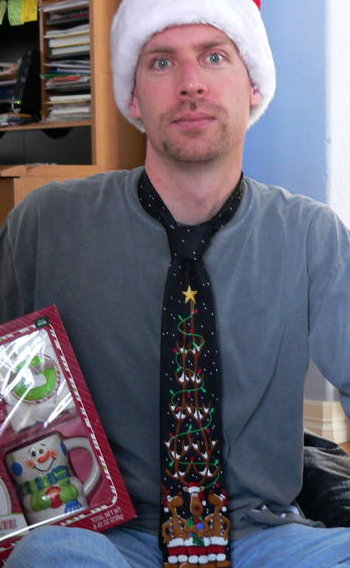 (I’d complained a month ago that I only have a single Christmas tie, so it’s nice to have a variety now.)

Zack had asked for a Gamecube and a Nintendo DS (hand-held game console), but he was plenty thrilled with a Gamecube controller that he can use on our Wii: 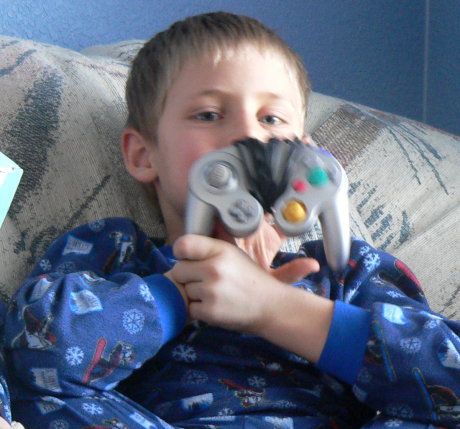 (The Gamecube itself was sent to Kari so my nephews could play it, and apparently they spent about ten hours immersed in video games.)

And who can forget La’s Totally Awesome Power Oxygen Base Cleaner? I have no idea what it does, but the name alone is completely cool. 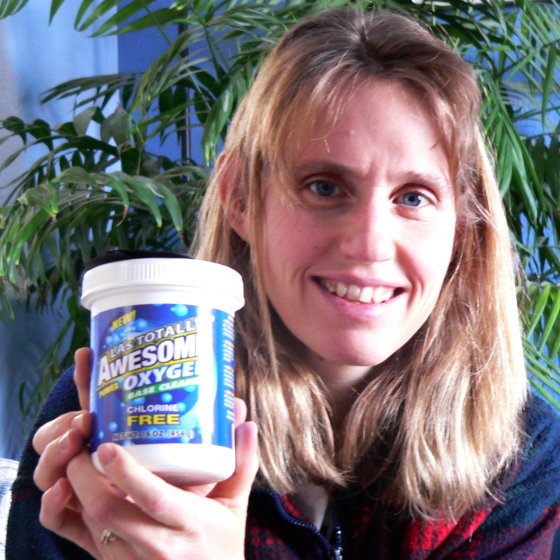 After everything had been opened and we’d eaten our traditional brunch of eggs, juice, and coffee cake, Kyra ran upstairs to use the new hair crimper that Aunt Kathy sent: 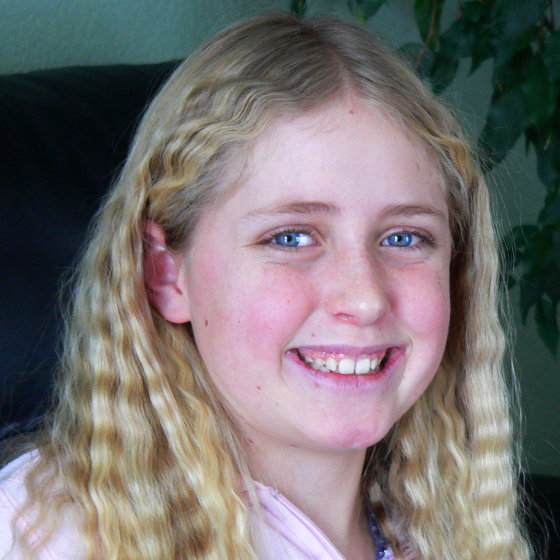 (I’m sure we’ll see new hairstyles every day for a while. Laralee got crimped as well.)

Not surprisingly, the kids flocked to the Wii to play a bunch of new games: 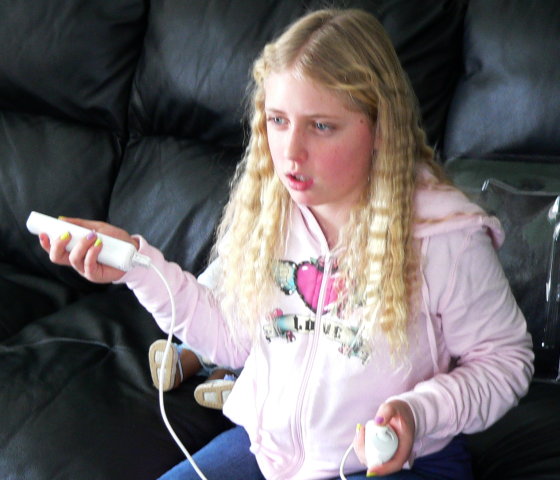 (Kyra swings her lightsaber in Lego Star Wars and hacks yet another Battle Droid into little Lego pieces.)

And me? I just took it easy all day. Some games of Bomberman and Super Mario Bros, reading the latest book on my shelf, and just generally doing everything possible to avoid working. Nice.

Merry Christmas to all, and to all a good night.

Happy birthday to the transistor!

It was sixty-two years ago today that the first transistor was demonstrated to an audience at Bell Labs. After that demonstration, work on improving the transistor took off in earnest, and it formed the foundation of all computing devices today. Sometimes called the greatest invention of the 20th Century, it’s hard to imagine what our world would be like without it.

As the number of Christmas cards I send goes up each year, it becomes more and more of a chore to get them printed and stuffed. This year I did some poking around the web and found a place that will print holiday cards for a reasonable price, and (more to the point) allow you to upload your own custom images for the front and back.

Satisfied this would do what I needed, I set out to create our cards. For the past few years we’ve decided that most people probably don’t want to read a full page or two of the Schroeder Clan’s exploits, so we’ve just sent pictures. So I put together a nice collage for the back, and we all sat down one morning before school to take a family portrait for the front.

It turned out pretty nice.

Of course during our “photo shoot” the last picture was a goofy pose, and just for kicks I replaced the nice picture with the goofy one. It was six flavors of awesome.

I was getting ready to send the goods to the print company when I figured I should show Laralee to get her wifely stamp of approval. She insisted that we use the goofy one instead of the nice one. “Everyone uses nice pictures,” went her logic. And since we’re, well, us… we shouldn’t be like everyone else.

Thus we sent the goofy picture, and it immediately received widespread acclaim. I can’t even count the number of people who have written or told us that they love the cards and it was the most fun Christmas card they’d seen in a while.

I suppose this will need to become a tradition. You know how most families have nice holiday traditions like “We sit around the fire and tell everyone how much we love them”? Well, I guess ours will be “We come up with the zaniest picture we can for our Christmas card”.

Yesterday the weather was a bit nippy at cloudy and 40 degrees, but we played ultimate anyway. The ground was rock-hard– literally frozen– and still had patches of snow which made for interesting hazards. Making sharp cuts was almost impossible; most of us ended up doing careful buttonhooks to get open for a pass.

Late in the game I was guarding my friend Cory when he wound up for a deep backhand pass. He swung his arm with all his might… and clobbered me in the face. The back of his hand got my nose and right eye pretty much like he was boxing me and trying to turn out the lights.

The blood started gushing (all over my white shirt, no less) and I had to step off. It had stopped by the time I got back to the office, but I was quite a sight. I told Brian and Rob there had been a brawl on the field and punches were thrown, and for a second they believed it because I sure looked like I’d been in a fight.

Luckily everything cleaned up okay and despite blowing a few blood clots out of my nose for the rest of the day, no permanent damage was done.

Sadly it doesn’t look like we’re going to be able to play tomorrow– we’ve got about eight inches of snow on the ground from last night and today, and tomorrow’s high is going to be in the teens. But at least it’ll be a white Christmas! 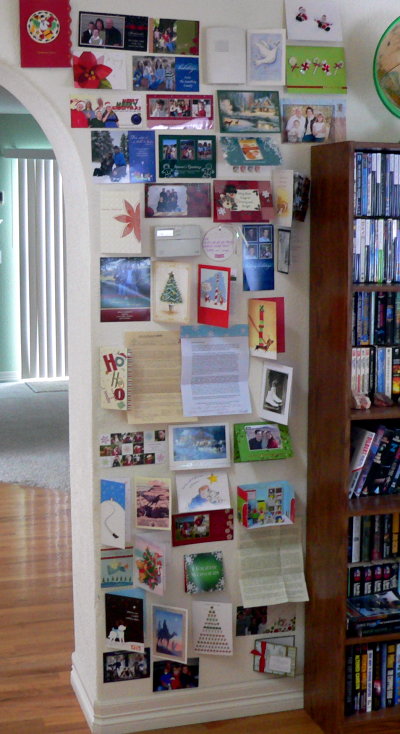 Laralee always wonders why I insist on sending 200+ cards every year, and I tell her that it’s because if I don’t, then no one will send us cards. And that would mean the card wall is really bare and boring. We can’t have that.

I was poking around a client web site and found their blog entry entitled “People You Can’t Stand on Facebook”. I guess it’s adapted from a recent GQ article, but it was one of those classic funny-because-it’s-true lists.

Relentless, Disingenuously Humble Self-Promoter
Wish me luck at the interview – I hope the headhunter doesn’t realize I’m not qualified to hold such a crazy impressive title!

Friend Who Can’t Let You Forget How Great His Lifestyle Is
Taxi line at Charles de Gaulle!

Girl with Crappy Job Who Really, Really Can’t Wait for Friday, to the Point That It Verges on Rain Main-like Obsession
Almost Friday!

Inspirational-Quote Guy Who Probably Has a Success Poster in Every Room of His House
“The secret of all great undertakings is hard work and self-reliance.” — Gustavus F. Swift 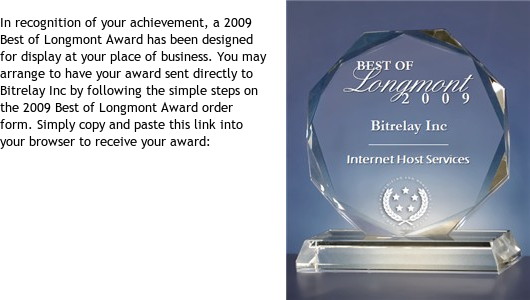 Wow, Best of Longmont 2009! In the Internet Host Services category! Who knew that my little company was even in the running for such a prestigious award?

Hmm, maybe I should put this little image on my corporate web site to impress visitors…

Phase one of the Christmas odyssey is complete. Today we wrapped, packaged, and addressed all of the gifts we’re mailing to friends and family. Laralee will brave the post office tomorrow, and they’ll be on the way.

Next is phase two: the Christmas cards. I’m putting together my list and checking it twice, and printing out hundreds of address labels. On Tuesday my professionally-printed custom cards (!) are due to arrive, and we’ll spend the evening stuffing envelopes. The post office loves that we spend a hundred dollars a year on stamps alone. And I’ve grown to love the pre-sticky envelopes, which may cost five times more than old-school lick envelopes but sure make up for it in ease.

Finally, phase three: gifts for the kids. For some reason we don’t get everything picked out, bought, and wrapped for our own kids until sometime in the evening of the 24th every year. But we’ve got some good ideas this year, and now all that remains is putting the plan in motion. 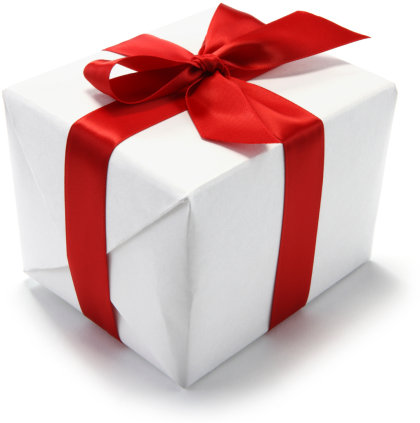 If you have something that you don’t want anyone to know, maybe you shouldn’t be doing it in the first place. If you really need that kind of privacy, the reality is that search engines– including Google– do retain this information for some time and it’s important, for example, that we are all subject in the United States to the Patriot Act and it is possible that all that information could be made available to the authorities.

To which Bruce Schneier, renowned security expert and relentless crusader against government intrusion into our private lives, responded:

Privacy protects us from abuses by those in power, even if we’re doing nothing wrong at the time of surveillance.

We do nothing wrong when we make love or go to the bathroom. We are not deliberately hiding anything when we seek out private places for reflection or conversation. We keep private journals, sing in the privacy of the shower, and write letters to secret lovers and then burn them. Privacy is a basic human need.

Too many wrongly characterize the debate as “security versus privacy.” The real choice is liberty versus control. Tyranny, whether it arises under threat of foreign physical attack or under constant domestic authoritative scrutiny, is still tyranny.

It’s interesting to note that Bruce said this back in 2006. It was true then, and it’s still true now.