I run some servers for a client, and some new people are taking over the project so they’ve asked me to put together a diagram showing the relationships between the servers and the functions they provide.

This environment has evolved over the past eight years– when I first started working on it there was only a single web server. As the layers have been added and the complexity has grown, some pretty crazy stuff has been put in place. But even I wasn’t prepared for the complexity of the overall ecosystem until I started sketching it: 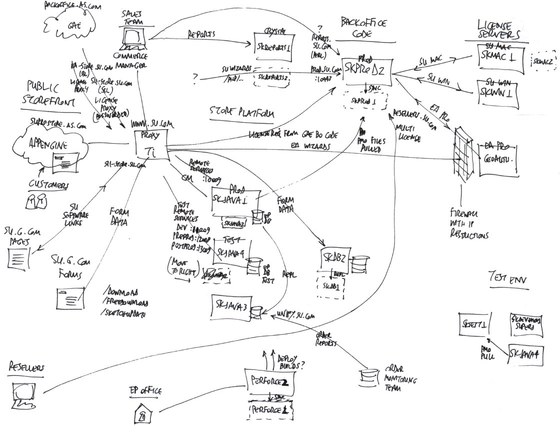 Now I have to figure out how to organize this into a nice diagram that will make sense to management. Whee.

Zack wrote his Christmas thank-you notes today. I know Grandpa reads my blog from time to time, so this is going to spoil the surprise, but I couldn’t help but share one of his notes: 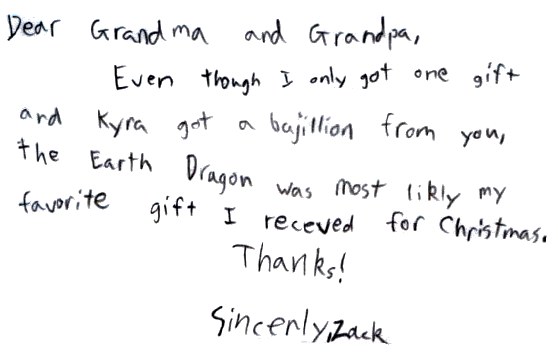 Ahh, the brutal honesty of a ten-year-old. As Laralee says, “At least he wrote them!” I suppose sometimes it’s the thought that counts.

(By the way, Grandma and Grandpa, the Lego Earth Dragon really is his favorite Christmas gift. So I guess that’s something.)

I just opened a letter from our health insurance provider with the same happy news they send at the end of every December: our premiums are going up. They’ve gone up between ten and twenty percent every year for the last decade. Since I’m considered “self-employed” we pay all of our premiums out of pocket, so I’m much more sensitive to the cost than I was when I worked for bigger companies.

Every December I grumble a bit about another 15% (or so) rise in our insurance costs, but every December we decide to soldier on and continue paying. We have a high-deductible plan ($7,000) which means the only thing the company will ever pay for is something truly serious like heart surgery or a kidney transplant or whatever. Last summer when Kyra had her mysterious illness for several weeks, we racked up $5,000 in hospital and specialist fees, and paid every cent out of pocket. That was a good time, let me tell you.

This year’s letter says we’re going to see an astounding 45% increase in our premiums. I can’t even imagine what would trigger an increase like that. The letter claims that all of the people covered by similar plans are subject to the same jump in price, so I suspect a lot of others are unhappy like me.

Now I’m seriously considering whether to have health insurance at all. We’re a healthy family: none of us really get anything more serious than a cold once a year or so. We have no major health problems, and Kyra’s incident was the only time in the last fifteen years we’ve gone to a doctor for anything more than a mild case of strep. If we’re paying close to $10,000 a year and then paying $5,000 when someone gets really sick, what’s the point? I should throw out the insurance and spend that money on a sweet family vacation or something.

Grrr. The health care industry sucks. And the insurance industry.

Christmas was a rousing success as always. Alex was really excited to receive… a white dress shirt? 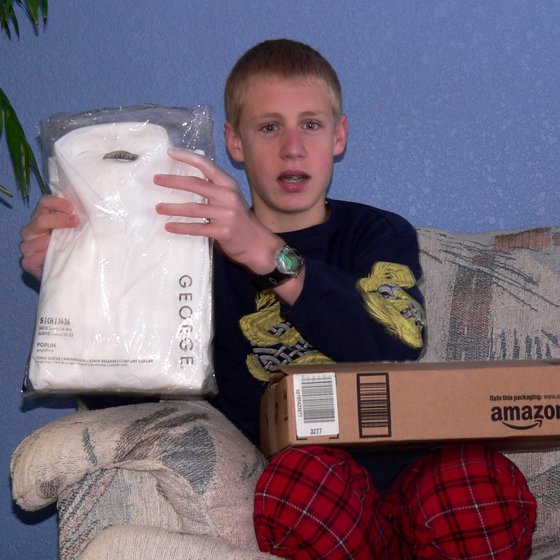 Being the romantic I am, I gave the love of my life a box of pens. 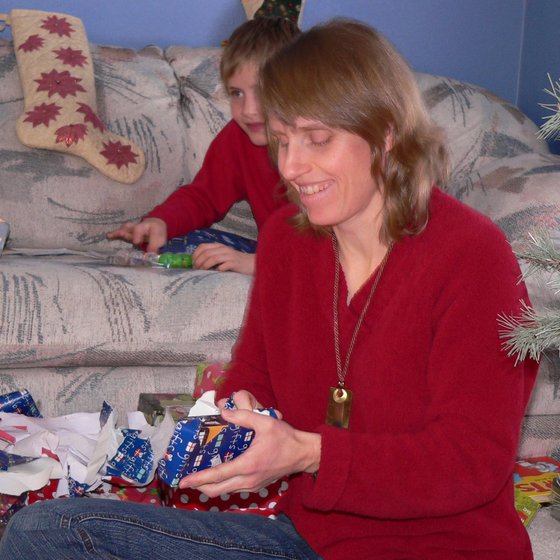 Zack got something called “Squinkies” which he insists are much cooler than their name. 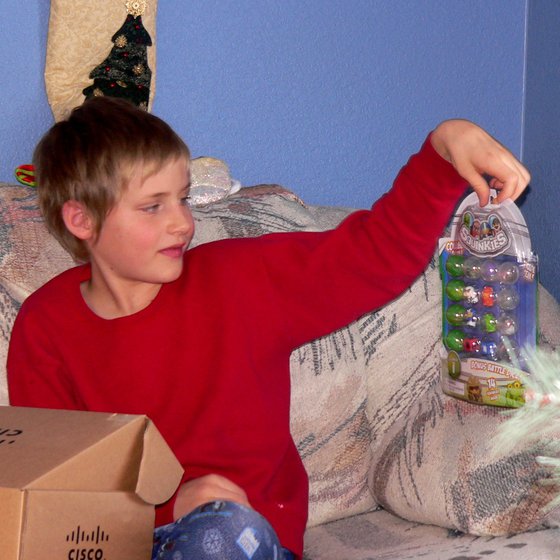 Zack also scored a book that we won two nights ago at our annual white-elephant gift exchange. The book’s title is “Farts: An Observer’s Guide” and suffice to say that it includes not only in-depth descriptions of different farts, but a set of buttons that plays them aloud for you. We all had a good laugh as he read them. 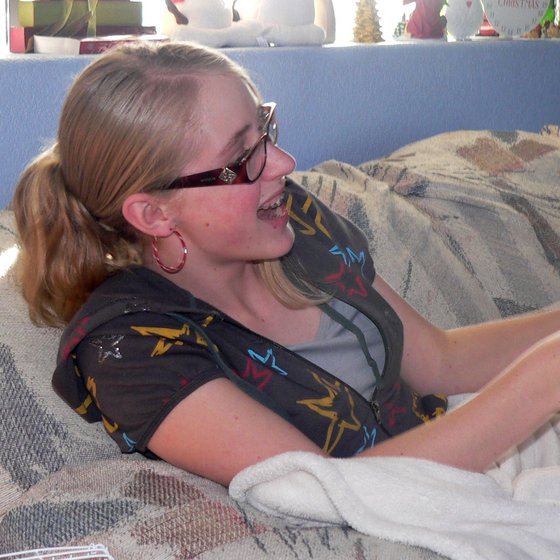 Lest anyone reading this think my gift of pens to Laralee was lame, I should point out that she bought me a set of oven mitts, two rubber bowl scrapers, and a can opener. 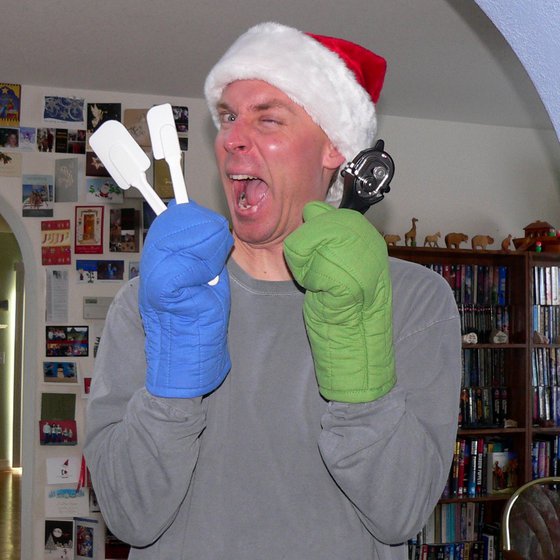 Growing up, each December we’d make chocolate candies for Christmas. Mom would buy a bunch of chocolate discs (apparently from a party supply store) and we’d melt it down and mix it with caramels, raisins, Rice Krispies, and mint. We’d make turtles with pecans and caramel, and pour some of it into molds. All in all, it was a lot of fun and of course eating it for a few weeks afterward was great.

So I decided it would be cool to do the same thing this year. I went to the grocery store and bought something called “candy coating chocolate” and made some tests in my Han Solo mold. They were terrible. The chocolate tasted like wax– I found out later that there’s actually a lot of vegetable oil added to it so it’s easier to work with, but apparently it’s only for a thin coating on stuff, not a solid chocolate bar. Scratch that idea.

I was chatting about it with some people at church, and my friend Kat overheard me. It turns out that she’s a semi-professional chocolatier and every year she spends a lot of time creating handmade chocolates for her family. She explained to me that you have to use a certain kind of chocolate, and it has to be “tempered”, and it has to melt at a certain temperature and be re-seeded with pre-tempered pieces so the crystal structure does such-and-such, and on and on. She’s a Ph.D. in neurobiology, so it sounded pretty impressive.

She assured me it wasn’t too hard with the right equipment, so Laralee and I made arrangements to get some of this magical chocolate from a mutual friend who happened to be traveling to Utah that week to buy it. She came back with a ten-pound block for us. That alone was pretty fun, because it was essentially an enormous candy bar: 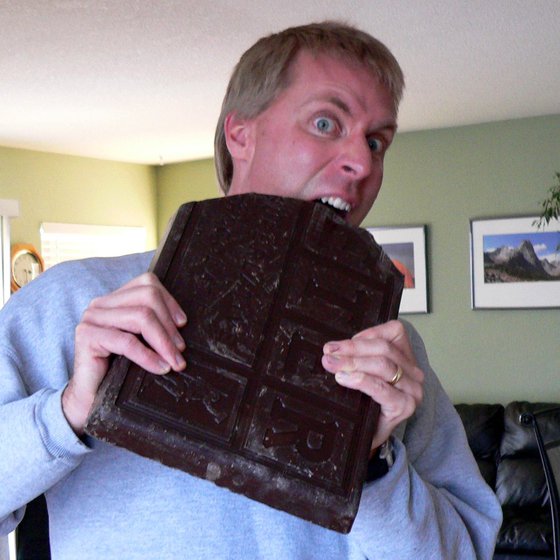 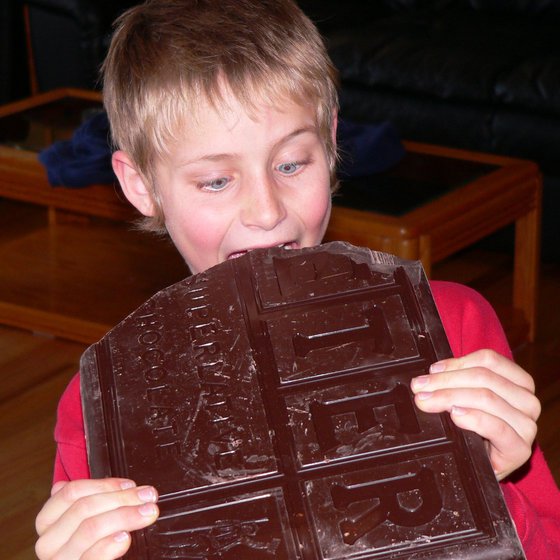 That’s only about 7.5 pounds of it. We’d already carved off a chunk.

Anyway, we went to Kat’s house and spent an afternoon learning the art of chocolate-making. It involves a special machine that costs about $500 and heats the chocolate to the right temperature so it melts and then recrystallizes and blah blah. Whatever the science, the fact is it works.

We poured some of it into the Han Solo molds but it turns out that Han is pretty hard to cast in chocolate. Tiny air bubbles tend to collect on his face and hands, making it look like he’s either been shot in the head by a blaster, or his hands were cut off by a lightsaber. So it was disappointing. But we dipped some caramels and mixed in some raisins, only to find that once the chocolate is out of The Machine it cools very quickly and leaves kind of a mess. The resulting chocolate-covered raisin clumps were immediately nicknamed “scat” by Laralee. 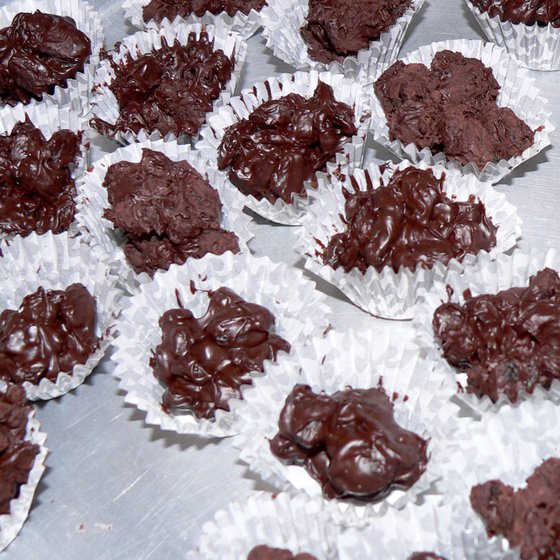 Yep, they definitely looked like scat. On the other hand, they tasted pretty darn good.

With all of this experience under our belts, we decided to take an evening last week to make a bunch of chocolates for our neighbors. We borrowed The Machine and went to work. 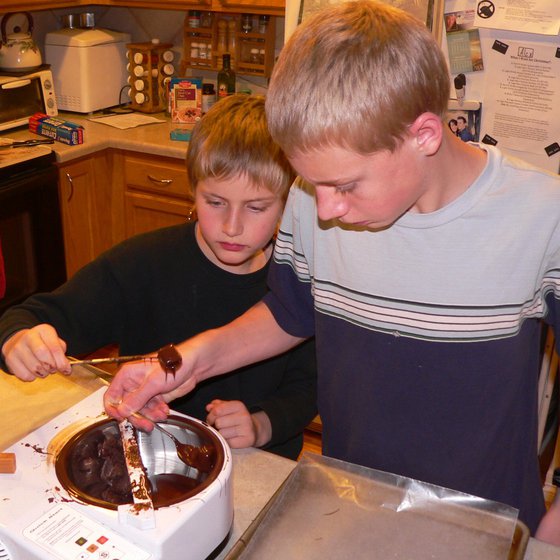 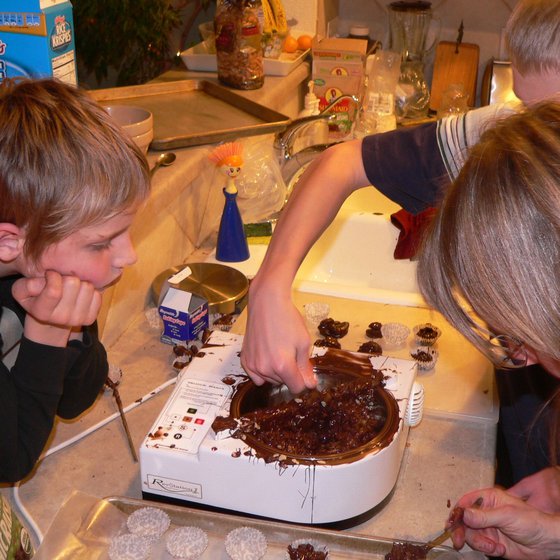 The results weren’t bad. We coated caramels and then mixed in almonds, pecans, Rice Krispies, and raisins. 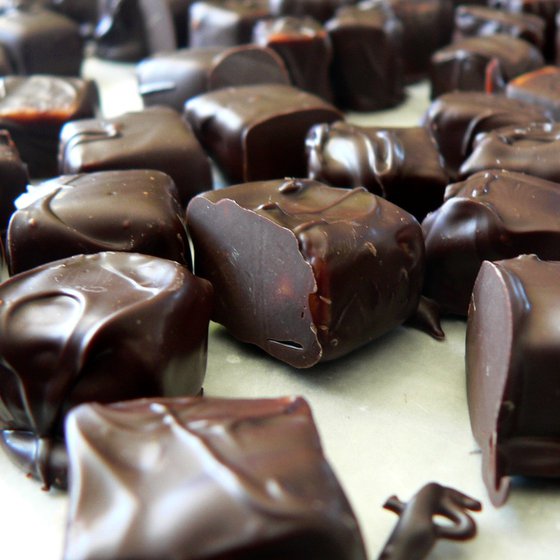 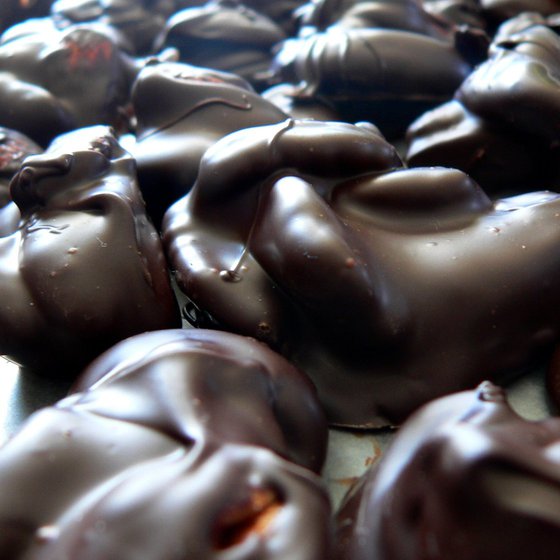 The kitchen, and we, were pretty much covered in chocolate when we finished. It’s surprisingly messy to work with melted chocolate for two hours. Alex took advantage of it a little. 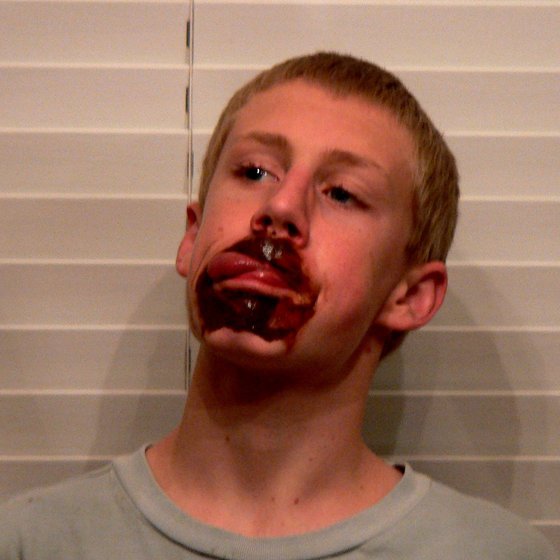 We divided everything and put it on little red plates and took them to our neighbors, who were thrilled. Fortunately there was a little left over for us, and we’ve been enjoying chocolate-covered stuff ever since.

I’m in the market for another employee, which means it’s time for the Parade of Crazy Resumes from Craigslist. Tonight’s batch included this gem:

In this expeditiously revolutionizing tech-world, Absolute Infotech brings together solution for mobile and software development to enable business’ growth. We vouch to deliver qualitative cost cutting, flexible and future-proof software solutions to our clientele. With leading edge technologies and techniques we bestow our customers a new wave to aggrandize their business. Our company has all the essential ingredients of a worthy and successful offshore software partner, which you can guesstimate from our achievements and our various project works.

You’ve got to love the use of words like “expeditiously” and “aggrandize” even though they make no sense in this context. The beauty of email, though, is one key deletes it.

Wikipedia is having it’s annual fundraising drive. If you haven’t donated, you should.

I love this Calvin and Hobbes cartoon, where he gets his school pictures taken: 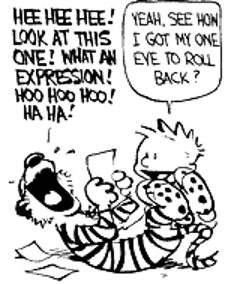 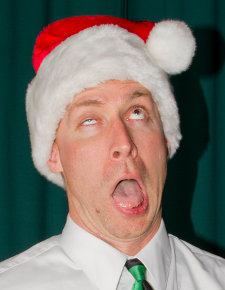 I have a client who’s been hosting a one-page web site for about a year. It’s simply the company logo and contact information, nothing exciting.

Apparently some people have been wondering when things are going to change, and are contacting his company (in droves, I guess) asking about the web site. So today he wrote to me and asked if I could put a little message on the page saying it’s “under construction”.

Then he followed up with an even better idea:

“Under Construction” at the top is fine… but if you have a small yellow icon of a person digging or similar that would help draw attention to it!

I was speechless. I thought the little animated GIF’s of guys in hard hats digging from a pile of rocks had died with GeoCities. But I guess not.

I resisted the urge to use an animated guy digging, but I added a little yellow icon and an “under construction” message. Hey, he’s the client, right?

Kyra’s science class is studying the elements, and each student was assigned an element. They were tasked with coming up with a creative way to demonstrate the element, its properties, uses, or whatever.

She was assigned boron.

Boron! Wow, what do you do with that? As it turns out, Kyra had a brilliant idea: cupcakes. 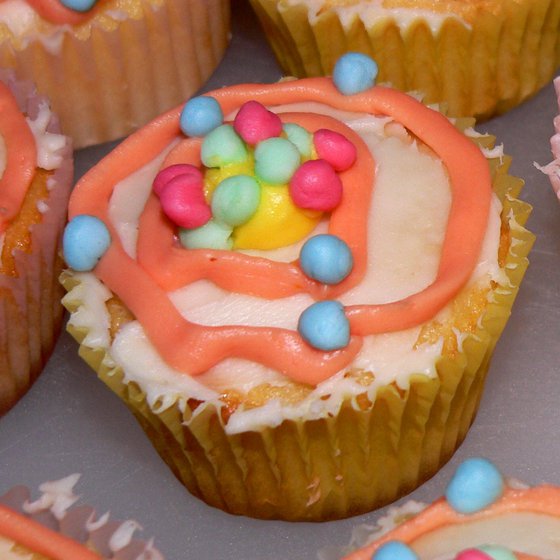 That’s right, a boron cupcake. She made about thirty of them, and after a thin layer of frosting she used homemade fondant to create the atomic structure. The pink balls are protons, the green ones are neutrons, and of course the blue ones are electrons zipping around their orange orbits. 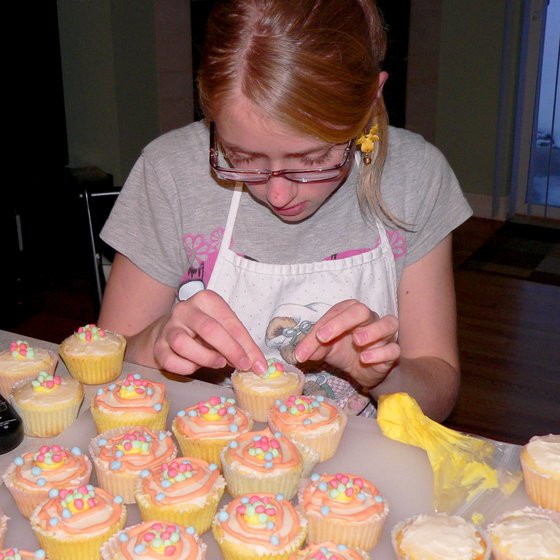 I was very impressed. Science can sure be fun.