George Bush– leader of the West, college graduate, and butcher of the English language– was particularly eloquent in a press conference today:

“It seemed like to me they based some of their decisions on the word of — and the allegations — by people who were held in detention, people who hate America, people that had been trained in some instances to disassemble — that means not tell the truth.”

Err, I’m sure he meant dissemble. And what’s with “It seemed like to me”? Sheesh.

Another year, another Memorial Day 10-kilometer run. I did the Bolder Boulder yesterday, an annual tradition, and despite the cold wind and threatening rain I managed to finish and meet my goal. I always intend to run in under an hour, and this time the official time clock said

[center:00:57:01]
Sweet. Just under the wire, proving that although I’m getting older I’m not yet old. Considering I didn’t train at all (except for the occasional pickup game of ultimate) I think that’s not too shabby… 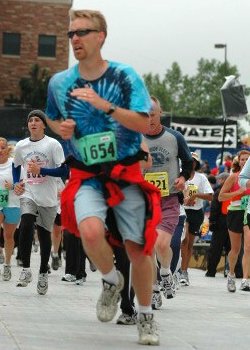 When asked about an impending Congressional vote on stem-cell research, President Bush said:

“I’ve made it very clear to the Congress that the use of federal money, taxpayers’ money, to promote science which destroys life in order to save life– I’m against that. And therefore if the bill does that, I will veto it.”

He then went on to say:

“However, the use of taxpayers’ money to design and develop new weapons to kill terrorists is A-OK by me! Show me the goods, Mr. Wizard!”

Okay, I was only kidding on that last quote. But he did say the first one, and it strikes me as ironic he’s so entrenched against the enormous life-saving potential of stem-cell research while being so gung-ho about killing Bad Guys.

From an article on CNET News:

Sixth-graders in American Fork, Utah, will start their journey to middle school on Tuesday with a warning from the director of the U.S. Patent and Trademark Office about the ills of illegally downloading music, movies and games from the Web. Director Jon Dudas is scheduled to deliver this year’s commencement speech at Legacy Elementary School, situated in the suburbs south of Salt Lake City.

“Under Secretary Dudas will remind students that downloading and copying music, movies and video games without…the artists’ or copyright holders’ permission is an illegal activity,” his agency said in a statement. “Dudas will also talk to the children about the importance of intellectual property and describe the value of patents, copyrights and trademarks in our economy.”

Hoo boy! Now there’s a good time! I’m sure the sixth-graders will be absolutely riveted by such gripping topics.

From a news story on Denver’s channel 9:

BOULDER, Colorado — Police officer Mike Pease can tell the difference between tulips and marijuana.
Pease plucked a handful of marijuana plants from a tulip garden on the Pearl Street Mall as dozens of passersby watched. While Pease spent 10 minutes weeding out the weed, pedestrians pulled out cameras and snapped pictures.

“It will be placed into property and evidence and labeled for destruction,” Pease said. “We don’t know who the owner is, so no charges will be brought against anybody,” said Pease.

“This is so funny. This is hilarious. This is so Boulder,” said Erika Kriksciun, a graduating senior at Boulder Fairview High School.

As I am often labeled a die-hard skeptic, I love quotes like this:

“The important thing is not to stop questioning.”

Steve, known to the world as VirtualSmitty, reports the following:

So, I get an AIM today out of the blue. Here’s the whole conversation:

I only responded the once. I thought that it might be an AIM spammer or something, but where’s the punchline? Where’s the “Cause you can refinance with Funky Joe’s Mortgage for just 3.14159% today!” I am so confused…

An update. A couple of hours later I got one more line from him:

… So the Saudi government has issued an official condemnation of the purported activities at the infamous Guantanamo Bay detention facility, where it’s said there were U.S. soldiers who desecrated the Koran in an effort to, presumably, torture Muslim prisoners:

“The government of Saudi Arabia is closely following, with indignation, media reports of desecration of the holy Koran at Guantanamo.”

I can only imagine the scene immediately after this stern statement was made.

After all, Saudi Arabia is one of the most oppressive governments in the world– always vying for that top spot with the likes of China and North Korea– so for them to condemn desecration of a book while at the same time completely disregarding the rights of their own women is downright ironic. While I don’t think that excuses the alleged acts, it’s certainly a case of Mr. Pot and Mr. Kettle.