First, there was a mouse. He (she?) had fallen into the window well by my office, and was spotted by Laralee. She called the kids down, and we all watched him running around the rocks trying to figure out how the heck to get back up. Trying to get a closer look, we opened the window and pulled out the screen.

You guessed it, the mouse jumped into the basement and disappeared into the closet. The kids shrieked and started coming up with plans to trap the little guy. At first it was funny, but as time wore on it became clear that getting our new friend out of the house wasn’t going to be easy. He was pretty small, and quick as a dart. He’d run all over the room hiding behind computers, under the desk, behind boxes, and so on.

Laralee eventually trapped him under a plastic CD stack case (a clear cylinder about five inches across and eight inches high). With great ceremony she took him upstairs and released him into the wild again.

The second thing that happened– well, actually it was first chronologically– was the eruption of a big wildfire west of Longmont. Laralee and I were driving up I-25 and saw a vast plume of smoke ahead. It stretched from the foothills (several miles west) across the interstate and well to the east. By the time we got to Longmont, we were in the thick of the haze and the entire sky was a brownish tinge.

The sun was a dim crimson red, and when I looked at it I could see the two enormous sunspots up there. Apparently we’re in the midst of one of the biggest solar storms in a decade, and these gigantic sunspots are at the heart of it all. It was pretty amazing to see them with the naked eye from a hundred million miles away. I can’t begin to imagine how huge they are– likely large enough to comfortably house thousands of Earths.

Anyway, I tried to get a couple pictures of them but our two cameras couldn’t get a high enough zoom to see any detail. Still, it’s possible to see the reddish color of the sun and the slight brown of the sky… 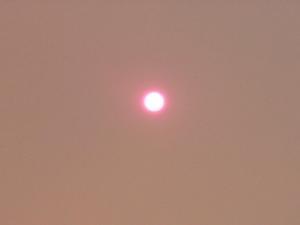 SunnComm is a company that makes copy-protection software for specially encoded CD’s. They’ve based their entire business on this software, which basically allows a user to listen to a CD on their computer. That CD has certain copy-protection algorithms on it that prevent it from being copied (digitally) and converted into, say, MP3 files which can then be uploaded to, say, an iPod and heard while you’re walking or in the car or whatever.

Of course converting a CD that you’ve purchased into a set of MP3 files is considered “fair use” under copyright law and is completely legal. Similarly, taking individual tracks from that CD and creating a “mix CD” of your own is also fair use.

… So this student at Princeton figured out that if you listen to the CD using SunnComm’s software and hold down the Shift key on the computer, the copy-protection is disabled. He wrote a paper about it– although I haven’t read the paper, it’s apparently critical of SunnComm’s methodology and copy-protected CD’s in general.

And what happened? That’s right, SunnComm invoked the DMCA and sued the kid for publishing this paper (which apparently dropped their stock price 10% when it got out). They claim he did the unthinkable when he figured out what file in the software did the protection and hit “delete”. And of course there’s the whole shift-key problem, which was apparently an undocumented “feature” of the software that is now causing considerable embarrassment for the company since the record companies suddenly realize that all the money they paid to protect their CD’s was wasted.

This is yet another example of a company overstepping the bounds and using the Big Bad DMCA to quash legitimate publication of facts. A telling quote from the SunnComm filing says:

“Once the file is found and deleted according to the instructions given in the Princeton grad student’s report, the MediaMax copy management system can be bypassed resulting in the copyright protected music being converted or misappropriated for potentially unauthorized and/or illegal use. SunnComm intends to refer this possible felony to authorities…”

This is absurd. The student isn’t doing anything illegal by deleting a file, or holding down the shift key, or even telling others about it. Moreover, to say he should be charged with a *felony* because his instructions might lead someone to *potentially* use the software illegally is akin to saying “Sorry, I can’t sell you this gun because you could *potentially* use it illegally.” or even “Sorry, you can’t drive your car because you could *potentially* go over the speed limit.” Since when can people be sued for “potential” crimes– and more to the point, the potential crimes of people they don’t even know?

The rights of the consumer– and, indeed, the public at large– continue to be threatened by things like this. Companies seeking to protect their corporate interests (excuse me, I mean profits) seem to think it’s okay to sue anyone who finds something amiss with their products.

Back in 1995, when I started working at Hughes, I needed to buy a new car. As part of the GM family, Hughes employees received a discount on the purchase of GM vehicles… which was great, except the only way to receive the discount was to also be a part of the Hughes Federal Employees Credit Union.

The minimum balance to open an account was five bucks, so I dropped a check in the mail and became a proud member of a credit union. I bought the car, got my discount, and drove home happy.

Over the years, I’ve never really done anything with that account. There didn’t seem to be any reason to close it, because sometime I might want to add some money to it (I think it earns more interest than a standard bank checking account) and because there are no maintenance fees. So every quarter I get a statement from them– they’re now called Kinecta for reasons only marketing people would understand– and dutifully file it in a folder somewhere.

The funny thing is that over the years, I’ve accrued interest on that account. Never adding or removing anything, I’ve managed to collect almost two dollars in interest. A typical quarter will bring me a few additional cents, and now my balance stands at $6.92. Wow, the power of compound interest!

Of course, out of a sense of duty I’ve included this account information on every loan application I’ve made for the four houses we’ve purchased. They ask you to bare your financial soul, so I give them my bank account balance, my savings account balance, the estimated value of my cars, and– lest we forget– the seven bucks sitting in my credit union account. I hope those mortgage people look it up, just to make sure I’m giving factual data.

Maybe by the time I retire, I’ll have enough money to go out and buy some ice cream or something. Thank goodness for credit unions! 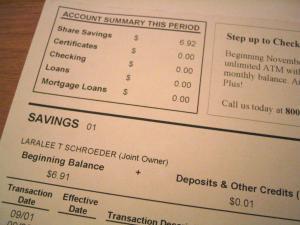 In their continuing quest to preserve order and justice in the bedroom, Alex and Kyra devised a set of rules. Alex wrote them down and posted it in the room for all to see… presumably so we would all know how to behave.

Taking into account some humorous spelling mistakes (hey, he’s six and did this all himself), the rules read as follows:

No (something).
No playing with the code.
No CDs.
No hits.
No bending the Pokemon cards.
No food.
Keep arrowheads in your pocket.
Keep your hands to yourself.
Keep your feet off the chair.
Keep your body off the desk.
Keep your shoes downstairs.

I think the best rule– purely from a personal safety standpoint– is that you should keep your arrowheads in your pocket. 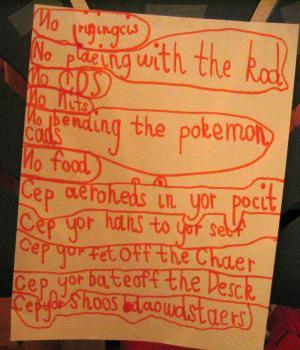 Laralee took Alex to some garage sales the other day, and Alex found a great use for one of his shiny quarters: two “joke books” that someone was probably overjoyed to get rid of. These books are those classic ones that are written for kids and are absolutely, positively, unquestionably not funny.

The best part, of course, is that Alex thinks they’re a total riot and every time he reads one to use he inserts his own personal laugh track and follows the punch line with “Get it?”. If we’re lucky he even tries to explain the joke, despite the fact that some of them involve plays on words that are a little above him. 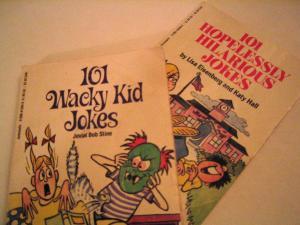 The EFF has written a long but thought-provoking article about the Digital Millennium Copyright Act (DMCA), which is regarded as one of the major forces behind the gradual erosion of privacy– particularly in the computer arena.

Using wide-ranging examples to demonstrate the damage incurred by the DMCA, the EFF points out how it’s illegal to do things like:

* Watch a DVD on your computer.
* Use a “universal” remote control or garage-door opener.
* Convert a copy-protected CD to MP3’s for your own use.
* Publish truthful information regarding computer security issues.
* Perform research into reverse-engineering security protocols.
* Customize your Sony Aibos robotic dog toy.

There are many more examples, and all of them show how the DMCA is being used for things far beyond what Congress originally intended when they passed the law in 1998.

As big corporations with expensive lawyers continue to take laws like the DMCA and pervert them for their own use and profit, the consumers and American public in general continue to suffer as a result.