Well, tonight’s the night. We’ve had our Halloween decorations up for a couple of weeks now, and– like Christmas– all of the preparation always comes down to one final day. One of my favorite decorations is this little construction-paper craft that Alex made when he was something like five years old: 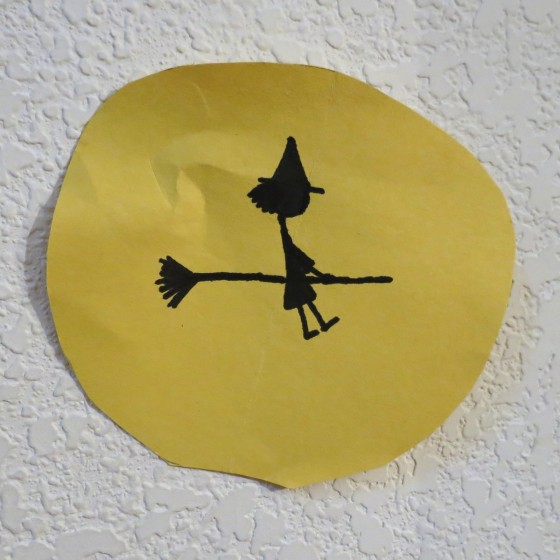 I don’t even know how it’s survived this long, but every year we tape it up on a wall somewhere.

Since Alex is 17 and Kyra is 16, neither of them felt like it would be appropriate to go trick-or-treating. Alex went over to a friend’s house where they were planning to jump off the roof (on to a crash pad) to scare kids. Uhh. I don’t think it happened, although it reminded me of the good old days when Dirk and I camped out on the roof of his house on Halloween and whenever someone approached the front porch, we’d drop a Cabbage Patch Kid who was tied to a noose. Hilarious! Kyra went to a friend’s house to watch a movie– apparently it was going to be something scary but ended up being The Dark Knight Rises. Go figure.

Anyway, Zack is the last trick-or-treater in the family, so he spent all of ten minutes planning and creating his costume. Behold… the hobo! 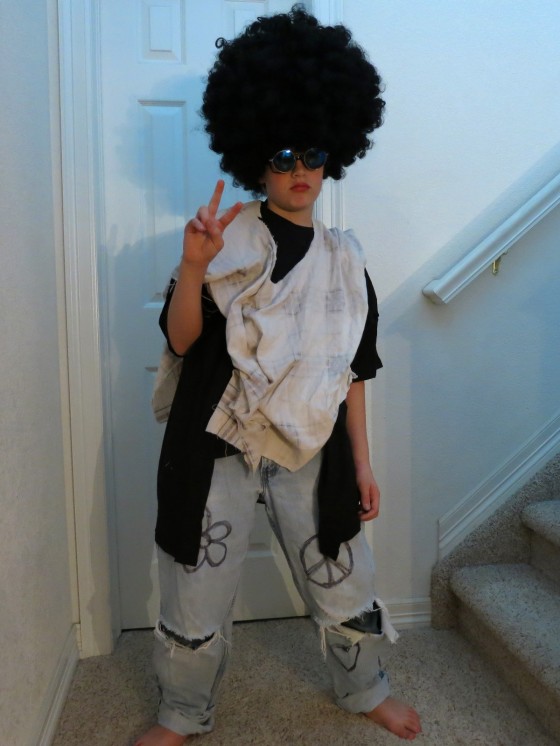 Basically these were some random old items I had stashed in our costume box in the crawlspace. After about five minutes he realized the afro wasn’t going to be a lot of fun as he walked the neighborhood, so it came off and he was basically some guy wearing torn jeans and the remains of a flannel bed sheet. Ahh, creativity these days.

I quit work a little early this afternoon because we’d planned to carve pumpkins as a family. Well, it turned out no one actually wanted to do it. We had five nice pumpkins on our front porch, so I went ahead and did a couple myself.

First there’s the classic one that I do every year: 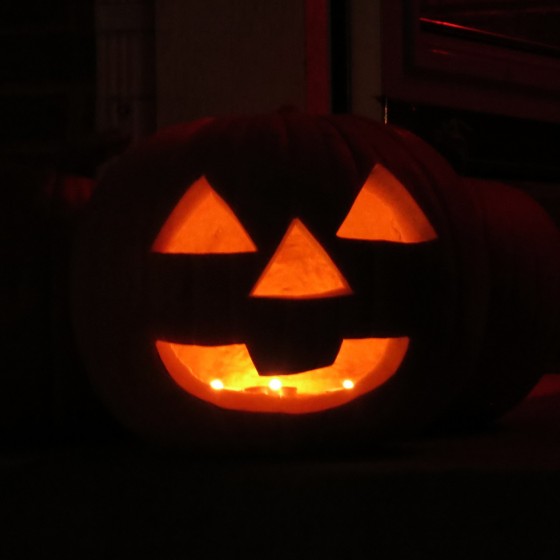 Then we had a tall skinny one so I really went wild and did something completely different: 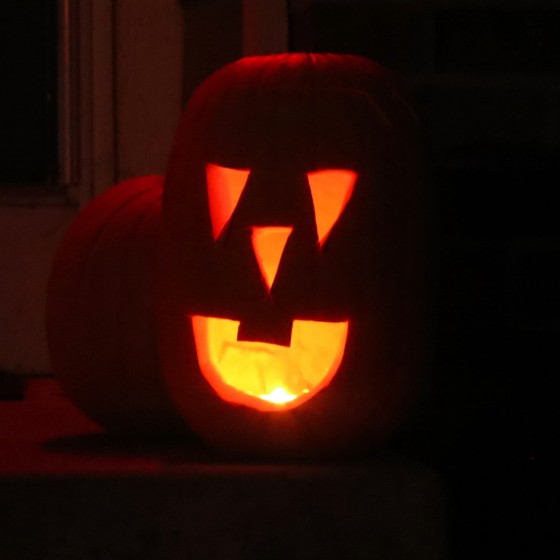 The other three? They sat on the porch as boring old pumpkins.

Despite the lack of enthusiasm from the fam about this holiday, I always think it’s a good time. Happy Halloween!

Today’s the deadline for Alex to send his senior picture to the high school. Of course we hadn’t done anything about it until now, and we weren’t really inclined to spend a few hundred dollars on the professional sitting because this photo will be used in the yearbook (which Alex doesn’t care about) and for a two-second part of the senior slide show. So Alex and I went to the back yard and he stood in front of the neighbors’ bushes. 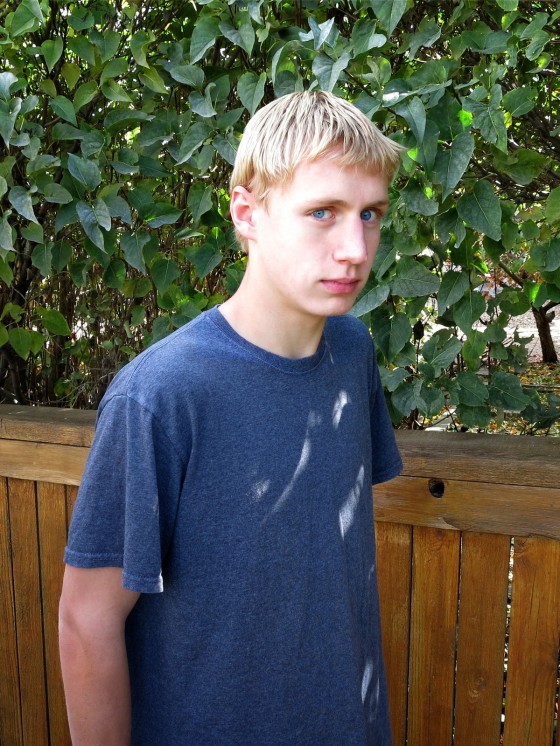 A bit of image editing to adjust the colors and remove a few prominent zits, and it turned out pretty decent.

I remember when I was in high school, I had a pretty bad situation with acne for a while. Back in those days, without digital photography they actually retouched the physical prints with some airbrushing. They removed all of my crazy zits, and the resulting picture didn’t even look much like me because I hadn’t had a complexion like that for years. At least Alex didn’t inherit that from me.

The cast comes off

Zack had an appointment with the orthopedist on Monday to have his arm cast removed. However, when we first had the cast put on, the doctor told us that many people simply remove it themselves after six weeks. He said it’s possible to use tin snips or some other sturdy sort of scissors, although he’d heard of people using power tools and he didn’t recommend that approach. I can’t even picture what sort of power tool you’d apply to an arm cast– a very careful application of a circular saw? Yikes.

Anyway, tonight at dinner we were talking about this appointment and how it would save us $75 (thanks, Obamacare!) if we just took care of the cast ourselves. How hard could it be?

We finished dinner and Laralee went to the garage to grab our pruning shears. Of course she sterilized them in boiling water for five minutes before using them in this delicate surgical manner. No, wait, she didn’t, although I think she might have at least picked out a few of the remnants of twigs stuck in the blade. 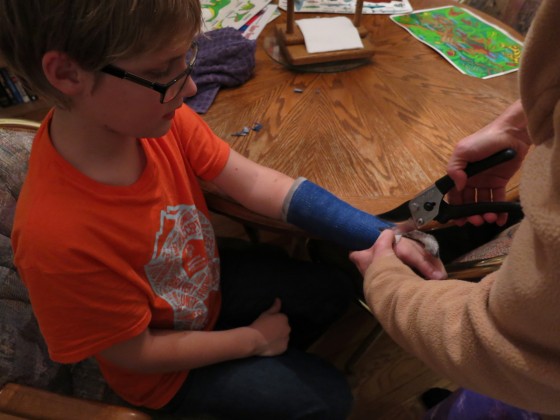 It took a bit of work, and after about fifteen minutes she’d gone the length of the cast and was ready for the final cut. 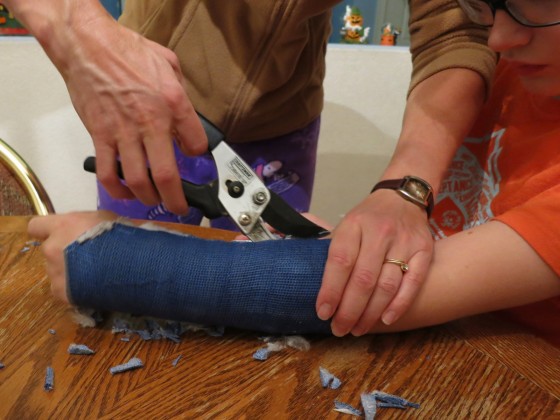 Zack was pretty happy to see his arm again. 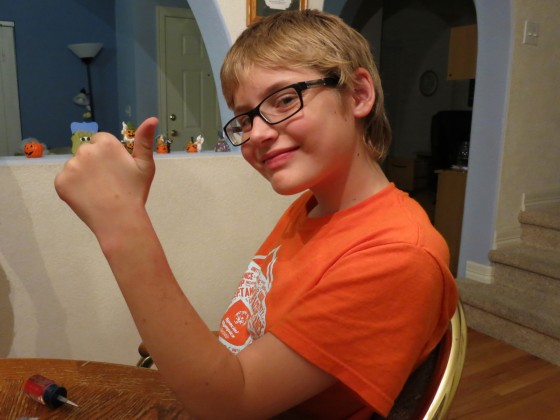 We weren’t too thrilled to smell his arm, though. Throughout these six weeks, he had to shower with a plastic bag over his arm, which means six weeks of sweat and grime had accumulated under this cast. It smelled like a high school locker room after two-a-day football practice in July. Holy cow. The inside of the cast could probably have been part of a science experiment.

He says his wrist feels “a little funny” but we keep assuring him it’s because he hasn’t flexed those muscles in over a month. By tomorrow all should be well again. And hey, it didn’t cost us 75 clams.

Every year I’m excited about Halloween and spend an inordinate amount of time working on a costume. This year I started early; back in early September I did some research to figure out what would be better: Kevin Flynn from Tron: Legacy or the Dread Pirate Roberts from The Princess Bride.

For the Tron costume, I’d need a robe with flexible glow panels sewn into it, as well as some custom boots and of course an identity disc. There’s a local electronics supplier that sells flexible panels and strips– really cool stuff. In the end, though, I decided it wasn’t going to work very well because the annual party we attend is well-lit so the glowing folds of the robe wouldn’t be as cool as they would be in a dim room.

So, I went to work on the Dread Pirate Roberts. I grabbed some screen captures from the movie so I could take a close look at the clothes and accessories he wore. Yes, I’m that thorough in my research. 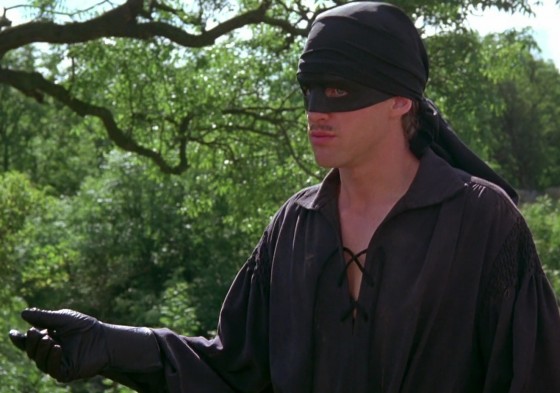 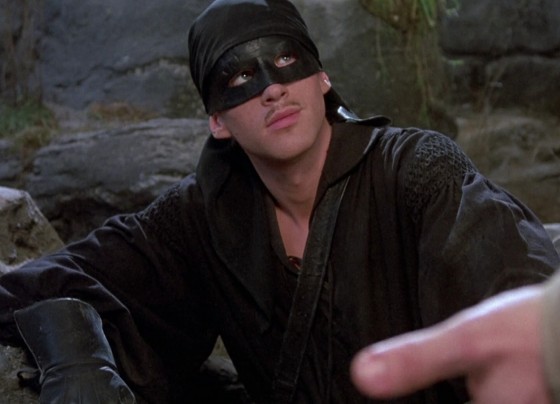 Then I headed over to Amazon to buy a few things. After a few weeks I’d accumulated leather pirate boots, a black shirt, gauntlets, a frog (a leather device that’s used to attach a sword to a belt), and I’d made a sash, head wrap, and was working on a mask. I looked around for a good prop sword but just wasn’t satisfied with the cheap plastic ones. I wanted this costume to look good, not comical. After some thought I cashed in a few Amazon gift cards to buy a real rapier. As things came down to the wire and my attempts to create a mask continued to fail, I finally bought a masquerade-ball mask at Walmart for two bucks, stripped off the bling, and sanded it smooth. A few cans of black and gold spray paint were needed to touch up the accessories a bit.

Of course Roberts has a little mustache, and I wanted to be accurate in every detail so I spent the last week growing out my beard a bit. 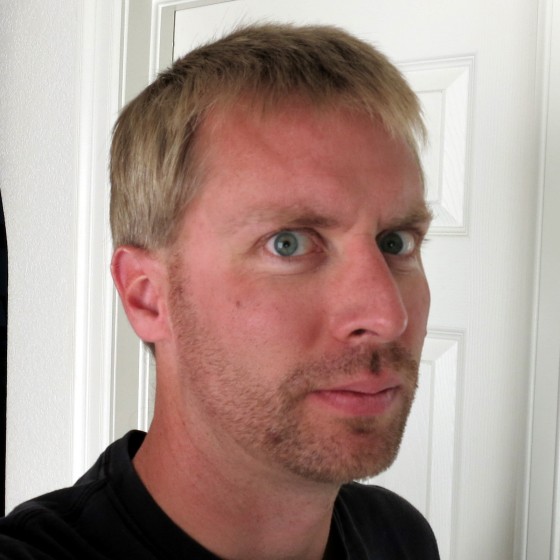 I actually drew a few compliments on the beard– it’s been a while since I had facial hair. Anyway, today I shaved down to a rather pathetic mustache: 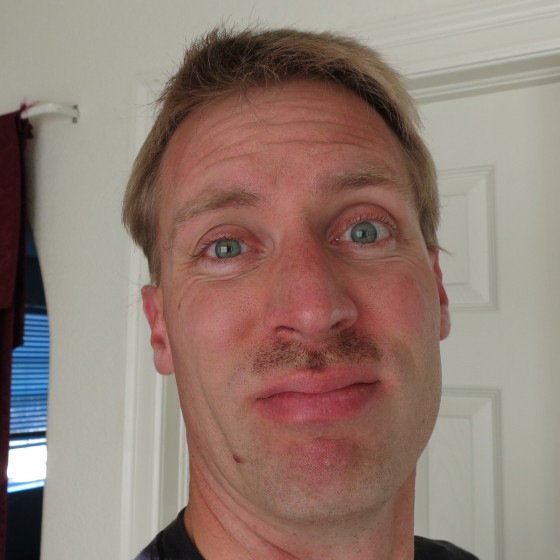 Yeah. This is why I’ve never had a mustache. But hey, it was the best I could do given the time.

This evening I put it all together and felt like it turned out quite well. 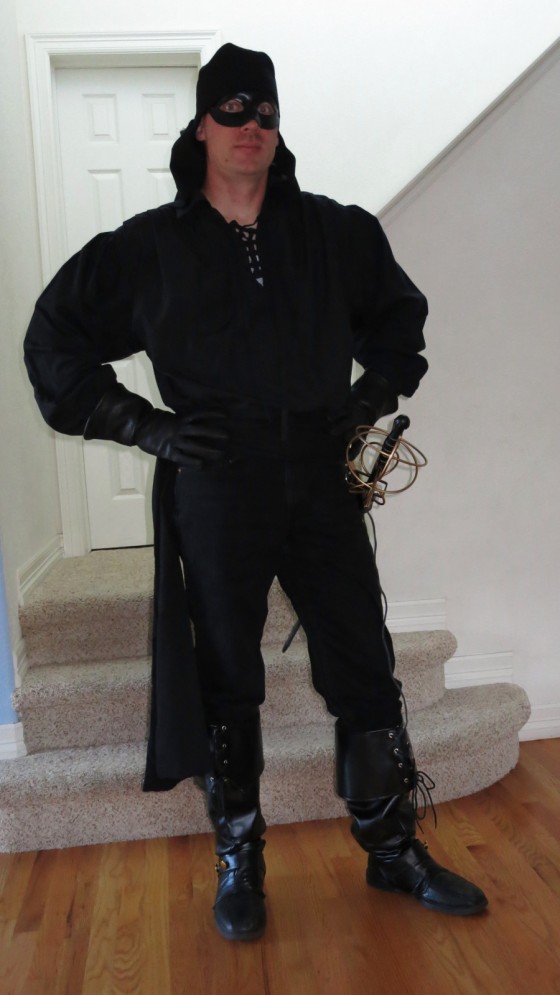 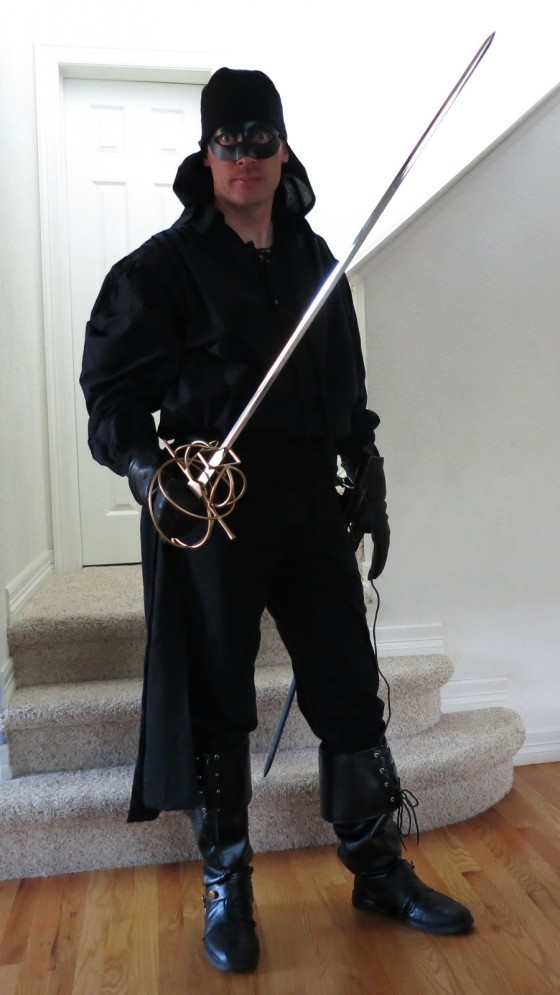 True fans of the movie would notice that it’s Inigo’s sword, not Westley’s, but I figured it was okay. I even made a little vial of iocaine powder and tucked it into my sash.

Off to the party! I stopped at the grocery store on the way so I could pick up some ice cream. I got some great looks from people, and my conversation with the 20-year-old checker went something like this:

Him: Going to a Halloween party?
Me: No, this is how I dress every day.
Him: (after a pause) Are you Zorro?
Me: I’m the Dread Pirate Roberts.
Him: (blank stare)
Me: From The Princess Bride. Man, your generation missed out.

To my dismay, he wasn’t the only person who thought I was Zorro. A lot of people at the party– even adults– didn’t recognize me. Ugh… I couldn’t believe the heathens. Everyone knows Zorro wears a hat. Maybe next year I’ll buy a wide-brimmed round hat and wear the same costume, except tell everyone I’m Zorro instead.

Anyway, it was a good party and a lot of fun to work on this costume. I sure enjoy Halloween.

This fall I did my first stint as an ultimate league coordinator, running a weekday evening league here in Longmont. It was awesome. We played under the lights every Tuesday through September and October. The weather was beautiful every week, which was unusual for this time of year but made for a good time.

I was also a team captain (as usual) and joined forces with my favorite co-captain ever, the indomitable Brenda (also as usual). We had won the summer league and picked another strong team at the draft. Brenda’s favorite color is orange, and just like in summer we chose that as our team color. When discussing names, the consensus was the Cuties. So, yep, I was a Cutie this fall.

We ended up 8-3-1 for the season, which was enough to land us in second place. Tonight were the last games of the two-week tournament. We were bumped out of the semi-finals but enjoyed a fun game against another team, then went to watch the latter part of the final game. It was a close, hard-fought game and definitely worth the price of admission.

This evening we took a couple of team photos: 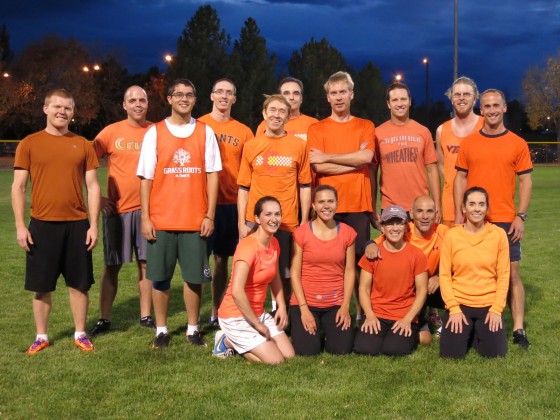 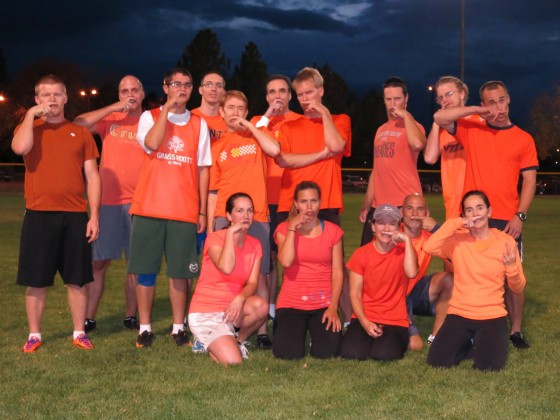 What a great group. We had a lot of fun together.

There’s one more week in the season: next Tuesday we’re having a Halloween hat, which means I’ll shuffle all of the players in the league and we’ll all play some ultimate in costume. That should be fun to see.

Wow, the beautiful fall weather continues. It’s been in the 60’s and 70’s throughout October, which is pretty unusual… but amazing. Today I enjoyed another great game of lunchtime ultimate, basking in the sun and running barefoot on the warm grass. Tonight we have a league tournament and it’ll be fun whether we win or lose (hopefully win!).

I keep waiting for the other shoe to drop and a blizzard to slam into us, but so far it’s been awesome. Global warming isn’t all bad.

After two and a half years, Laralee finally had her braces removed. It was a happy day for her. 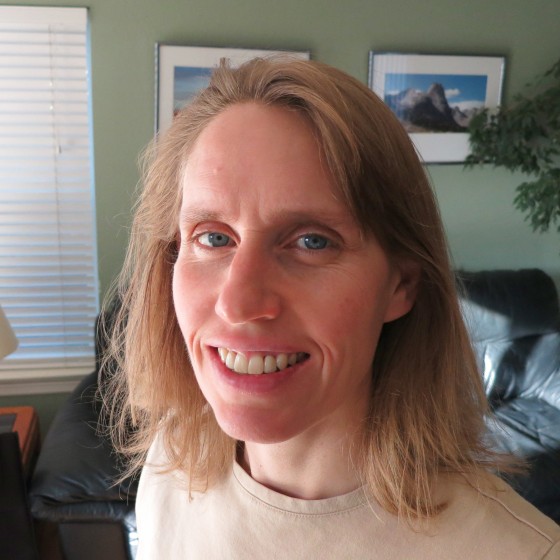 Of course there’s still some work to be done. She has titanium posts implanted in her jaw right now, and in a few months she’ll get permanent teeth attached to them. Total time: roughly three years. But it’ll be worth it… we hope.

My new duvet cover arrived, and it looks awesome on the bed! 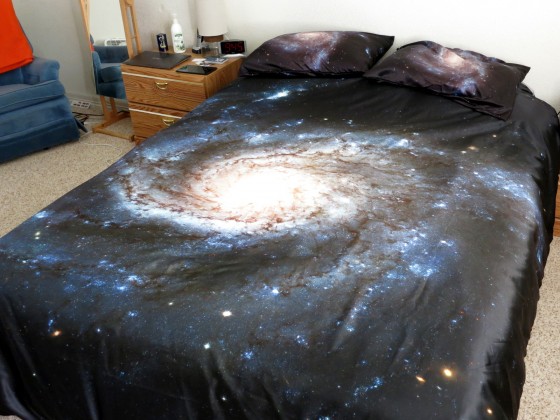 Laralee isn’t all that excited, but for a guy who loves astrophysics, it’s perfect.

Here’s Thom at Beau Jo’s, posing in front of a big greasy pile of grease. Mmm! 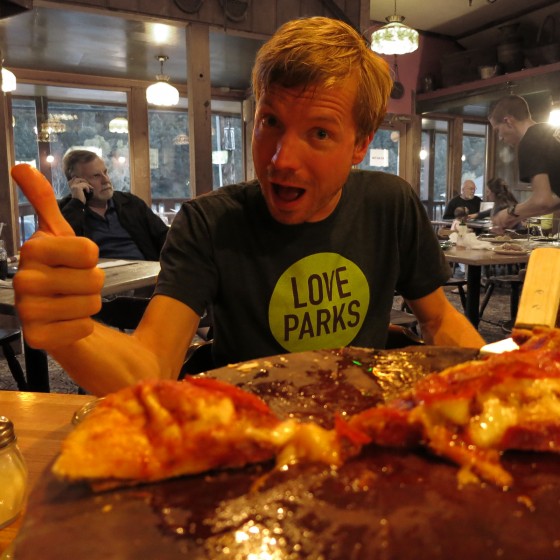 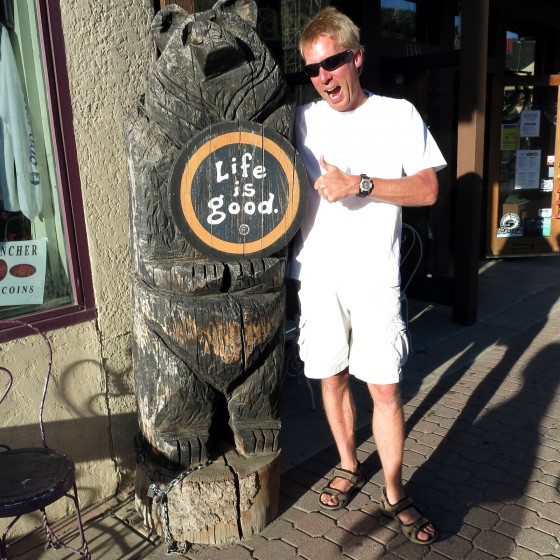