I’ve been trying to break Zaque of two bad habits for the past couple of months. One is that he takes off his shoes when coming in the front door after school, and just leaves them there until the next morning. The other is that when he’s working at his little computer desk, he often has snacks and leaves glasses, plates, and crumbs on Laralee’s desk (right beside him). In both cases, I’ve been nagging him but it hasn’t worked.

A few days ago I struck on an idea. I would charge him one cent for the first infraction, and then the price would double every time he forgot to put away his shoes or clean up his snack. On day one, he failed on both accounts, so he owed me $0.03. I mentioned to him that the power of doubling is amazing: after a month of not putting away his shoes, he would owe me a little over ten dollars.

Since then, he’s taken care of it every day. Apparently three cents was all it took to break him of his habits… 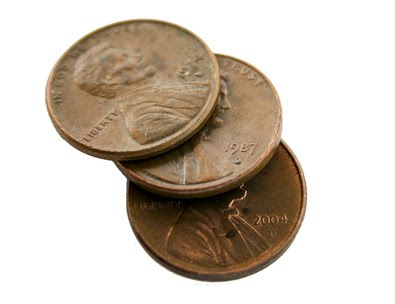 So today I had planned to spend the morning installing some new hardware at BitRelay: a server, a switch, and a backup disk array. It was all pretty innocuous, and I figured I’d be home a little after lunchtime to hang out with Laralee and Zaque and enjoy the Presidents’ Day holiday.

Well, I forgot to bring the disk array with me, which meant I had to make another trip and basically spend three hours in the car (it’s a 45-minute drive each way to the datacenter).

And when I installed the new switch, for reasons unknown to me, my entire network stack went down. That meant all of the servers were running but couldn’t be reached from the internet, so for about 15 minutes a whole bunch of clients were calling and emailing me and my team asking why their web sites were down. Meanwhile, I was frantically plugging and unplugging things, hoping that I could fix whatever had happened and get everything running again. In the end, I really don’t know what happened because rebooting the network stack twice seemed to resolve it. Ugh.

By the time I was finished it was evening, and then I had to write an explanation (and apology) to my clients so they understood what had happened and how I’d keep it from happening again. That’s never a good conversation to have.

In a little ray of sunshine, one of my clients responded with this:

Stuff happens and we do not always know why. No worries.

Nice. That helped to remind me that despite my feeling that it had been a disaster of epic proportions, in the grand scheme of things, 15 minutes of downtime isn’t really all that big a deal.

I was looking through some photos and found this one of my beautiful girl. 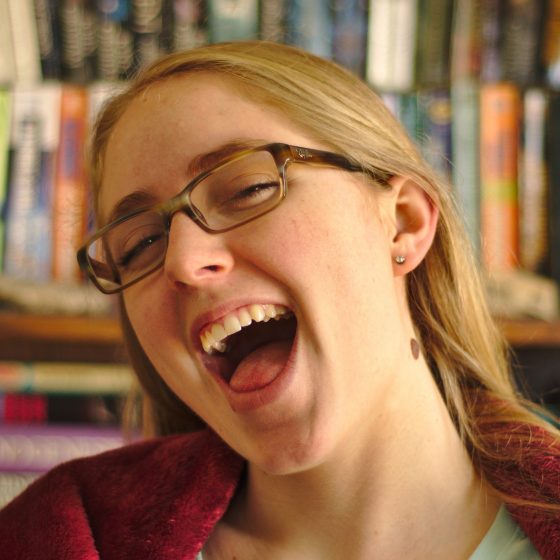 I know she’s having a blast in college, but there are days when I miss her…

One of my clients has prepared a rather extensive contract to cover the web site work that Zing does for them. We’ve been going back and forth for several months (yes, really) about some of the terms and clauses, and we think it’s finally in a place where it’s acceptable to both sides. So this afternoon I’m reviewing all 34 pages of legal language, which includes countless sentences like this:

Wow. What a fun way to spend a Friday afternoon, huh?

“We put the FUN in funeral!”

Yesterday I had a bit of a hankering for caramel cupcakes, my second-favorite dessert. Laralee and I went on a walk and stopped at the grocery store to pick up supplies, and I went to work. 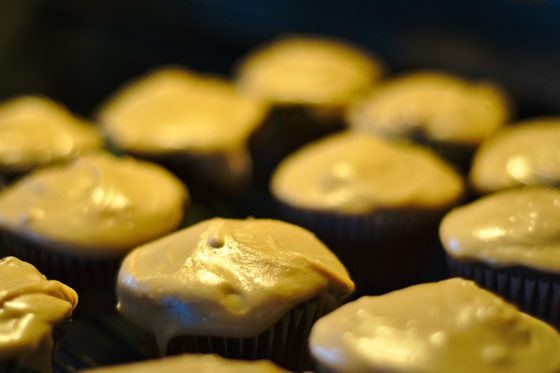 Mmm, sugary deliciousness. Since I can’t really eat 24 cupcakes by myself, I’ll probably bring some of them to tonight’s Super Bowl party…

Except for the arthritis and impaired vision, of course. I’m not that old.

A few days ago Kyra called me because she was having a bit of a rough day. We talked for a while, and I did my best to remind her how awesome she is. Afterward I decided to order a big tub of Red Vines– her favorite candy– and ship it to her as a sort of “cheer-you-up” surprise. I hopped on Amazon and placed an order for a five-and-a-half-pound tub.

Fast forward to today, when a box shows up on our doorstep. I was surprised because I wasn’t expecting any packages. I opened it and found the Red Vines. Dang it… I’d forgotten to change the shipping address from my house to hers!

So now I have five and a half pounds of candy that I don’t even like. 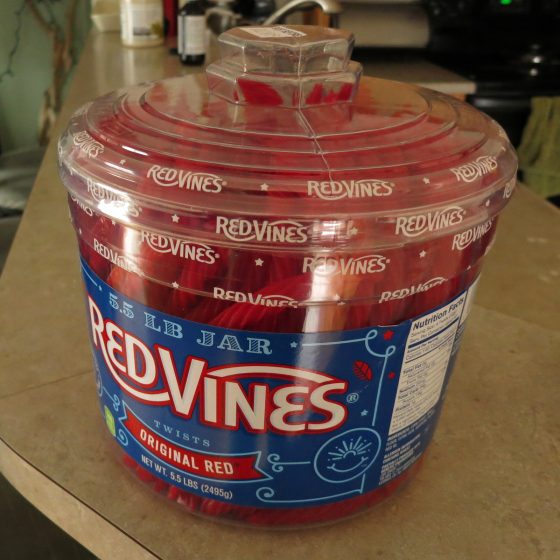 This stuff is made out of petroleum or something; I don’t know what substance it is, but it’s unnatural.

Realizing my mistake, I ordered another tub and double-checked the address. Hopefully Kyra will enjoy it sometime next week. In the meantime, I’ll probably bring this thing to seminary or something, where I’ll have seventeen half-asleep teenagers willing to help devour it.