I thought it was spring 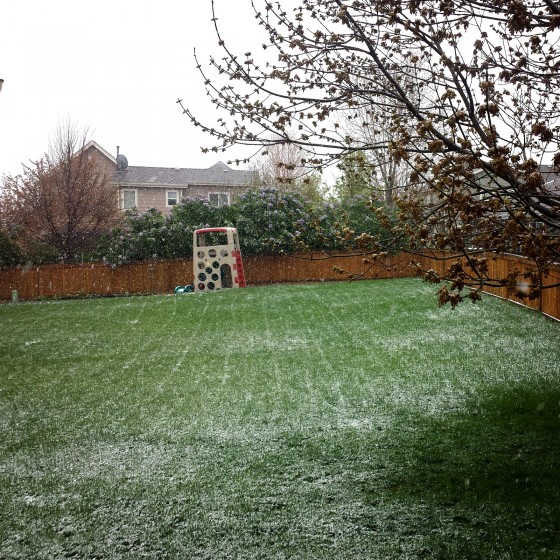 For most of April, it’s felt like November or something. The past few days have brought cold, grey, drizzly days that eventually turned to snow. I suspect this year we’re just going to skip over spring and go right into summer.

As a guy who typically eats pizza several times a week, the last 16 days have been pretty hard. Since I’ve been sick, I haven’t been eating my “normal” diet, and given my runny nose and hacking cough, a half-pound of mozzarella cheese probably wouldn’t have been a good idea.

But today I was able to end my fast. Brian and I went out to Parry’s Pizzeria and enjoyed a half-pound of mozzarella with an obnoxious amount of grease. 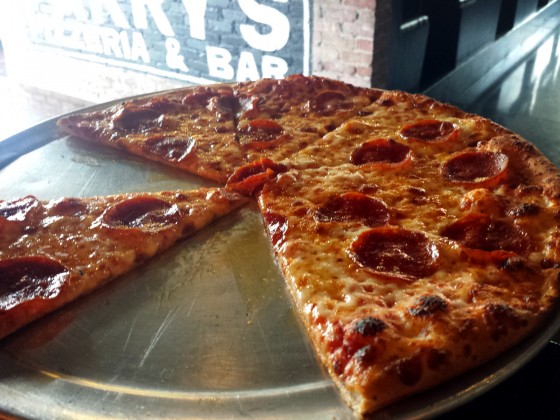 Ahh, it’s good to be back in the saddle.

So Kyra went out to prom last night with her long-time friend Ricky, who looked dashing in a white suit. 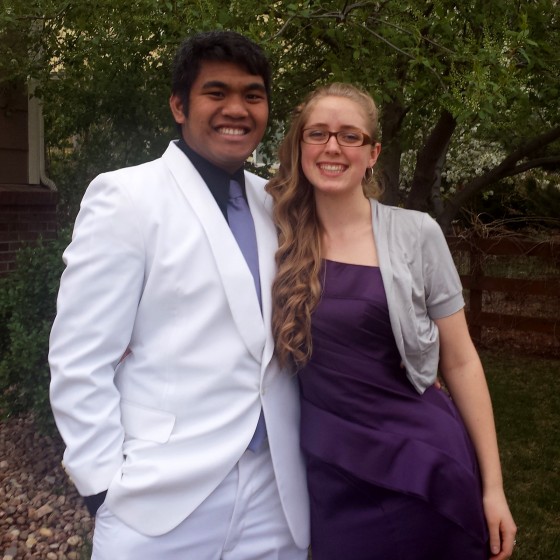 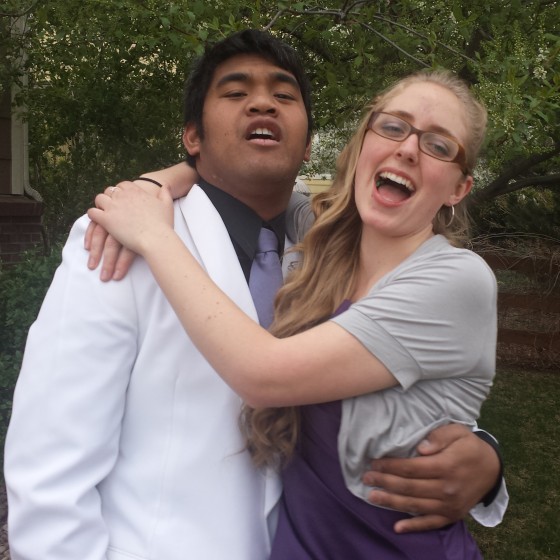 It almost didn’t happen… Ricky lives in Utah and had been planning to drive out here, but was involved in a car accident a few days ago. His friend, who had been planning to come as well, ended up cancelling. In the end, Ricky bought an airline ticket and showed up ready to roll. Now that’s dedication! (Or a serious crush on my daughter.)

It was spring break, Zack was off with friends (as always), and the rest of us were sitting around home wondering what to do. Kyra’s friend Chaille was bored as well, and lounging on our couch. Laralee was just getting over a cold, and I hadn’t yet started mine, so we decided to go bowling. Because, why not?

Of course all of us were terrible, but that’s not the point. The point of bowling, as everyone knows, is to launch the ball down the lane with the most speed possible so it absolutely crashes through the pins and knocks them over with sheer momentum.

It’s also important to have a little dance prepared for when you get a strike. Here’s Kyra showing hers. 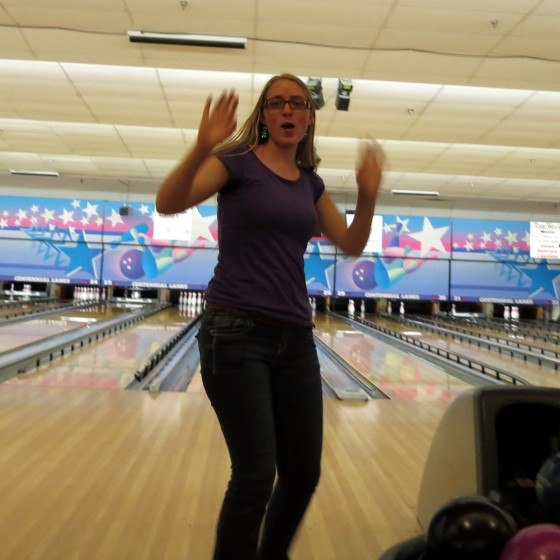 (I had quite a few little dance moves, which naturally irritated Laralee, who only had one or two strikes all day.)

We’d paid for 90 minutes, which was just about enough time for three games with four people. As the minutes wound down, though, we realized we weren’t going to quite be able to finish the last game. So the final three or four frames became sort of a comical speed-bowling competition, where we were often tossing the ball down the lane before the little gate had been pulled up. Luckily there weren’t any incidents like that time at Dirk’s 15th birthday party (long story).

Here are the three ladies looking all professional or something. 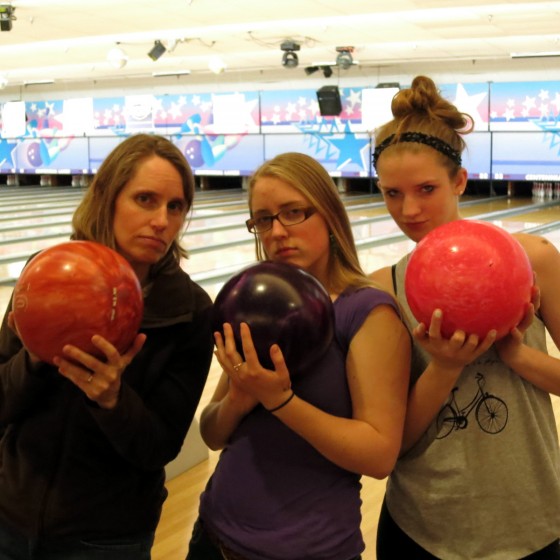 And of course I always look good. 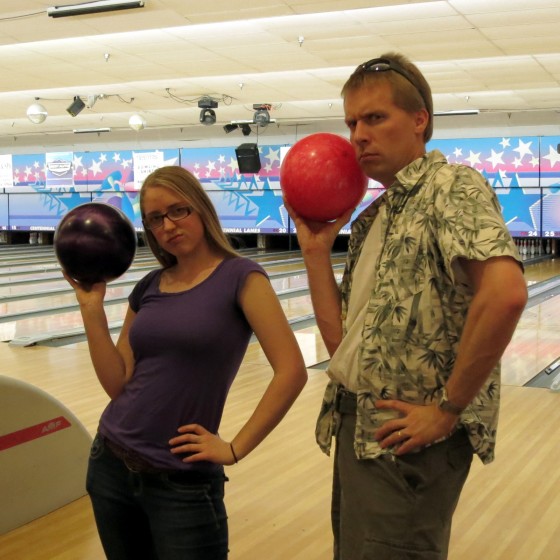 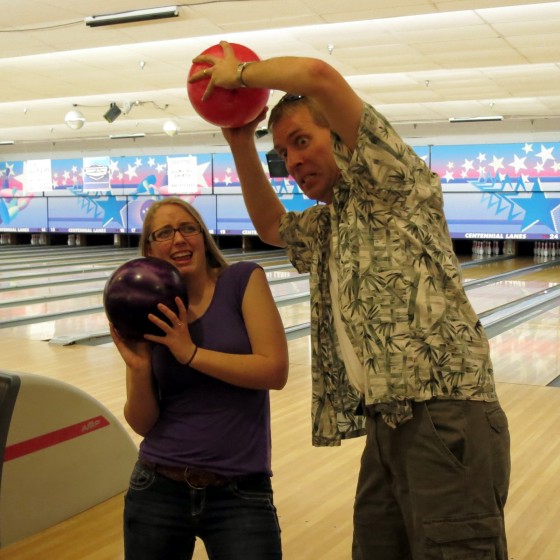 For a long time, Zack has been planning to buy one of those goofy rubber horse heads. We keep telling him it’s a waste of money and after about five minutes he’ll get bored of it, but it doesn’t squash his dream.

A couple of weeks ago, Laralee was putting together an order on Amazon and needed to spend a few extra dollars to hit the free shipping threshold (yeah, we’re too cheap for Prime). So she dropped a horse head in the cart, and a few days later we had it. Zack didn’t know, and he was off at his friends’ house when it arrived. Kyra put it on and sat on the couch, and he came in, saw her, and was confused. “I didn’t know you wanted a horse head too!” he said. Kyra told him it was for him, and he practically melted. He gave her a big hug and told her what an awesome sister she is.

Here it is in all its glory: 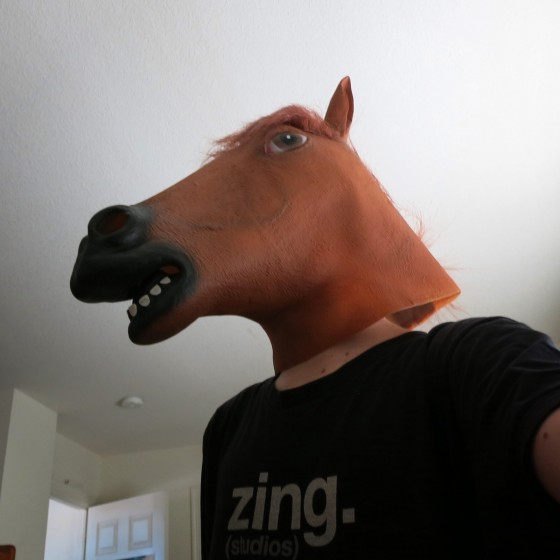 Ahh, Zack. Sometimes I don’t know about that kid.

I found a few more photos from our adventures with Thom, Katie, and Julian a few weeks ago.

All of us headed down to Boulder to hike at Chautauqua, which is a popular trail leading into the foothills on the western edge of town. It was a gorgeous day and fairly crowded on the trail.

Julian might sometimes wonder about that weird cousin of his… 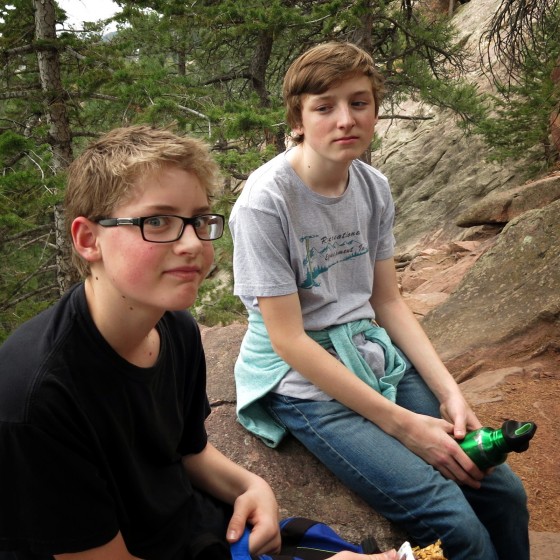 We’re resting at the top of the Flatirons: 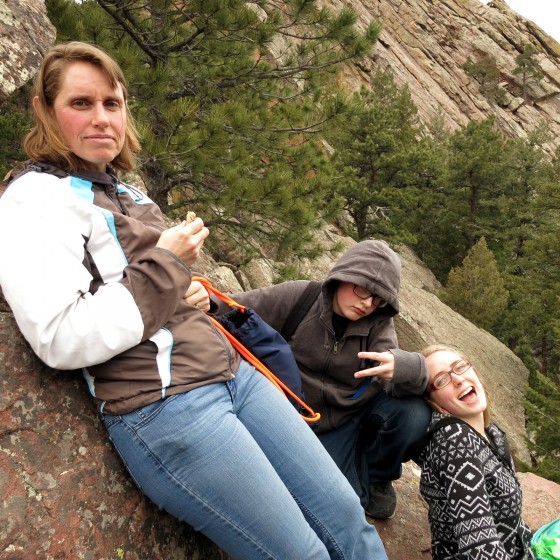 Thom gazes out at the rest of the Flatirons, with Spivey (?) peeking out of his pack. 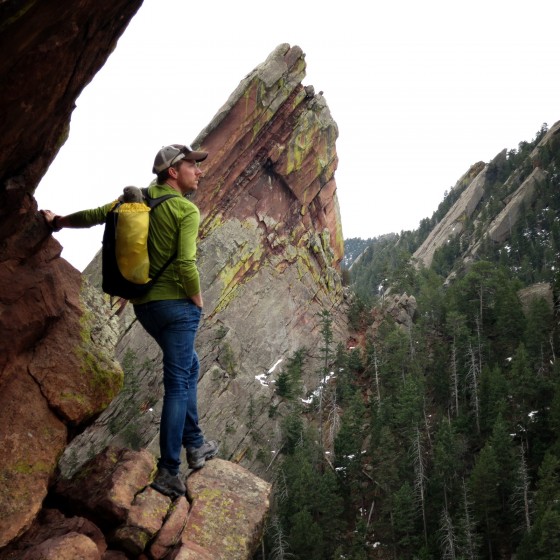 Zack and Julian “ride the dragon”, so to speak, in a park in Golden: 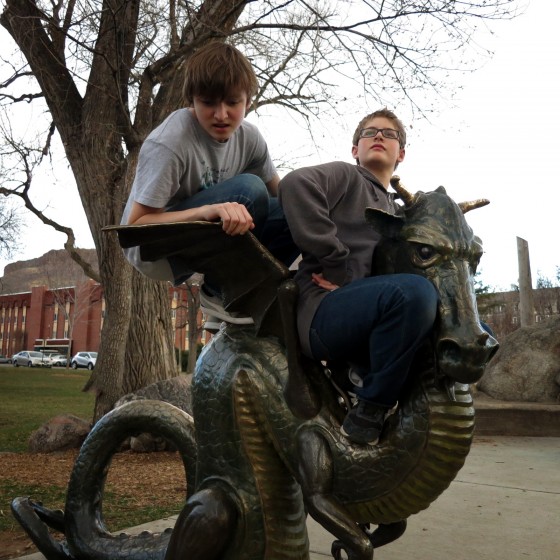 Here are Thom and Katie at the peak of Copper Mountain: 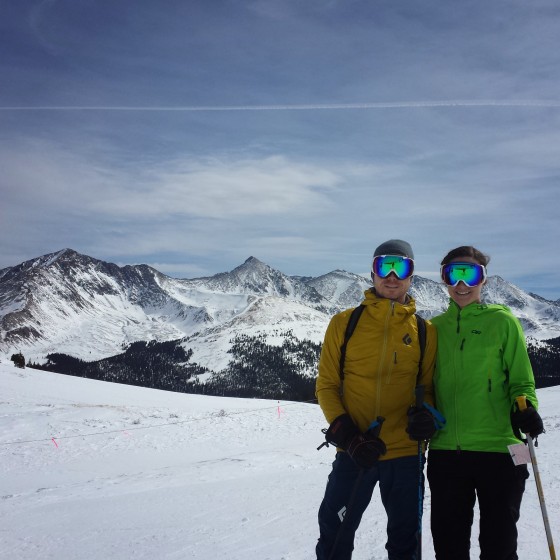 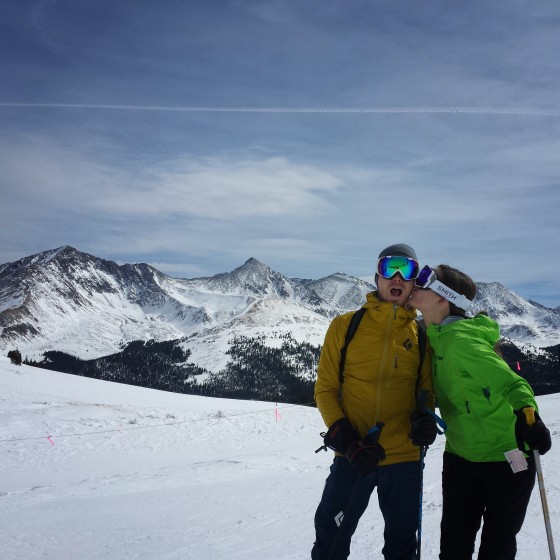 Good times as ever.

When Thom, Katie, and Julian dropped in for a visit a few weeks ago, we decided to head up to Rocky Mountain National Park for a day hike. The three-mile (or so) hike up to Emerald Lake has always been my favorite, so we hoisted our packs and started up the trail, which was buried in at least four feet of snow.

Even in the cold, grey, windy weather it was amazing. 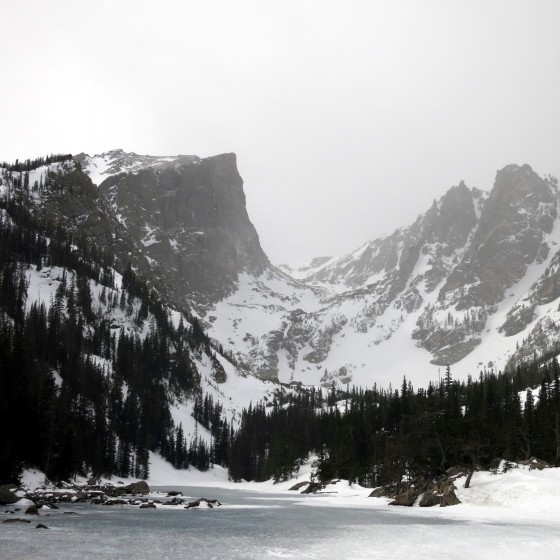 The lakes were all frozen, but I think there’s a pretty constant wind up in the area, so the water was wavy and actually looked more like a flowing river. 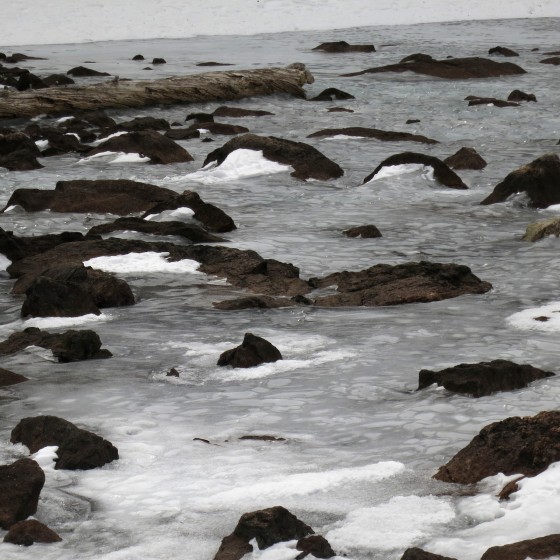 Here are some of the “waves” up close: 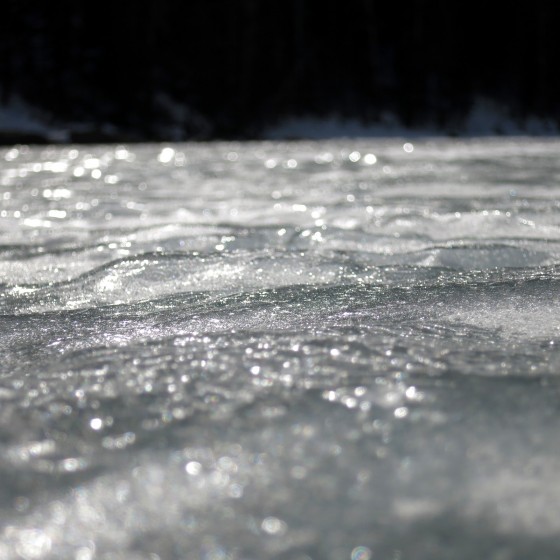 Heading back a few hours later, the clouds started to clear and the sun warmed things up a little. Here’s another view of the peaks with some blue sky peeking out: 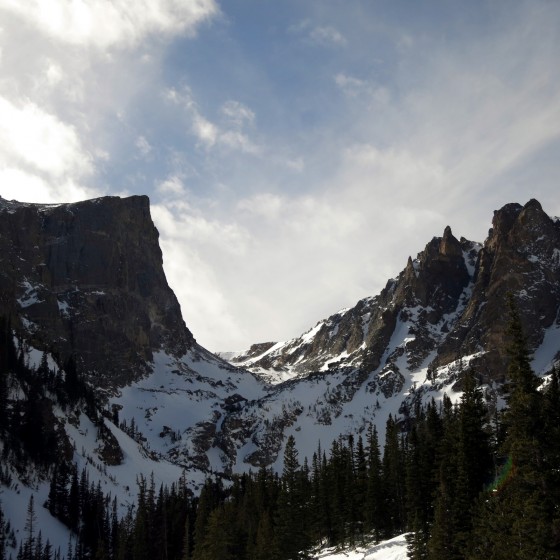 Another reason it’s great to be a guy: prior to prom, a guy might run a comb through his hair just before heading out the door to pick up his date. Might.

For a girl, four hours before prom begins, you need a hairdresser to start working on you so your long golden locks are just so. 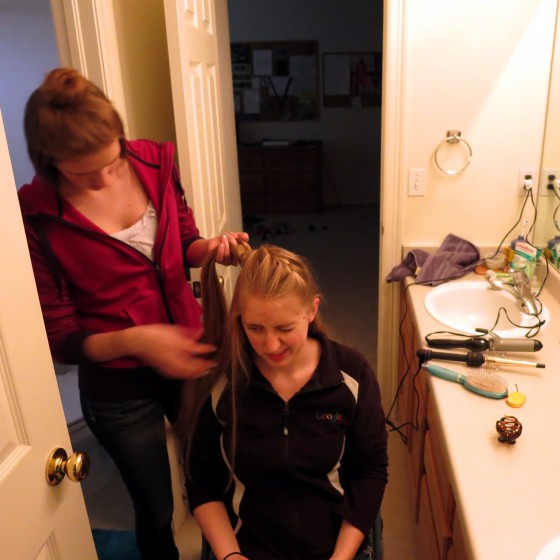 Today one of our clients wrote to Brent:

We need to remove the dog image. There was a list of approved assets for launch. I’d like to make sure they are implemented. The dog is approved for use, but not for launch.

We have these two sound clips, one is of chickens clucking and one clip of a rooster call. We would like to make a sound clip using the chicken sound first for a few seconds and ending with the rooster, altogether maybe 5 seconds, when the website is opened. Only for the home page, not for the other pages.

My response, which I felt was pretty diplomatic considering how much I was laughing after the initial request:

I would recommend against this. Very few web sites use audio clips on their home pages, and playing sounds without having the visitor click on something is typically considered intrusive. In addition, not all browsers and operating systems support the same audio formats so it can be a challenge to have a format that will work across all platforms.

If you feel strongly about doing this, I’m sure we could work it out, but it’ll probably take several hours to combine the audio clips, choose an appropriate fidelity, convert to the best format, and add the code to make it work across browsers.

How about just putting a button on the first page that says ‘Click for
Cluck’ and let people decide if they want to press it and hear the
clucks and rooster call?

And thus was born Click for Cluck. Josh combined the audio clips and built the code on the home page so visitors could click on the link to hear chickens and a rooster. I think it stayed on the site for several years before we were asked to take it down.

So I’ve had a cold, or the flu, or some kind of horrible combination, for a full week now. Laralee caught something about two weeks ago, suffered through it for about five days, and then I caught it from her. She and I were both coughing and sneezing for a few days together, but she finally recovered while I continued to be laid low. I skipped out of work, missed several ultimate league games, had to get substitutes for my seminary class, and basically spent day after day in bed or on the couch. Ugh.

I rarely get sick– maybe once every year or two– but boy, this one is probably the worst I’ve had in a decade or more. It reminds me how nice it is to feel well. Hopefully I’m finally on the upward swing (although I stayed home from work again today) and can put this behind me. Sheesh.