According to NOAA, Thom and I should have some perfect weather for our backpacking trip…

I may have set a new personal record for a crazy work day. I did work for twenty-one different clients. In one day.

Today a ten-pound package from Staples showed up at the door. I thought maybe Laralee had ordered a thousand pens or something. I certainly hadn’t ordered anything from Staples, although the box was addressed to me.

So I opened it and to my surprise it was full of… candy! 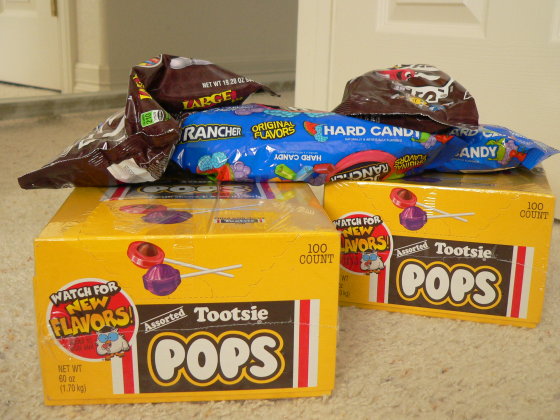 Then I remembered one of my clients saying they wanted to express their appreciation for our hard work on their web site over the past few months. They had asked me what they could get to show their gratitude, and I jokingly said a box of candy would probably suffice.

Next time I should ask for a Porsche.

Reading an online tutorial about encoding and decoding JSON data from a web site, I noticed a great ad on the bottom of the page. 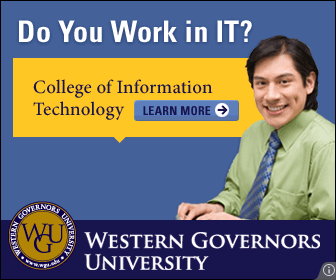 Whoa. I’m not sure what’s worse: his grimace, his greasy parted hair, his creepy keyboard hands, or the fact that if he really worked in IT he wouldn’t be wearing a shirt and tie. I mean, come on… that’s so 1982 at IBM.

For fifteen years I’ve sported a goatee. I met Laralee with it. I got married with it. My kids have never seen me without it. Most of my friends don’t know what I look like without it. 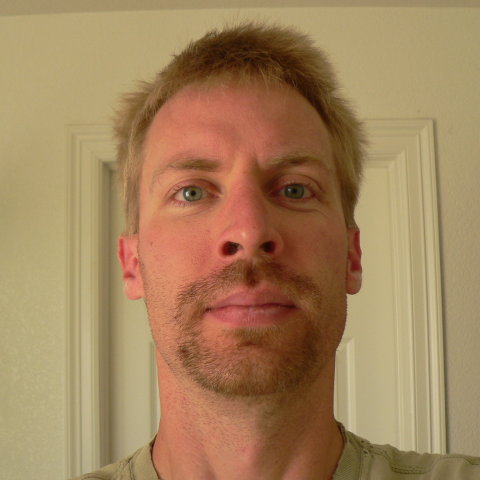 But, it was time. Here goes… 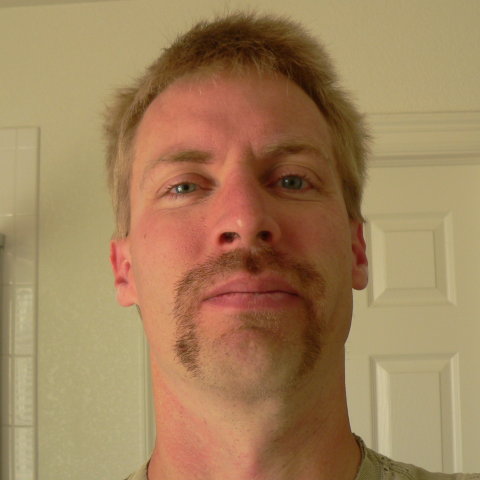 Ouch, kind of painful shaving in a place that hasn’t felt the caress of a razor in fifteen years. But finally it all came off. 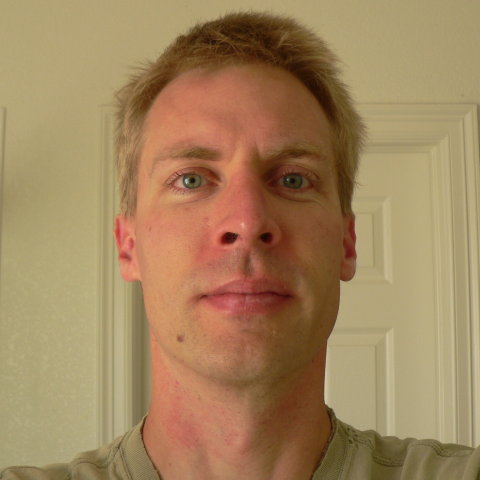 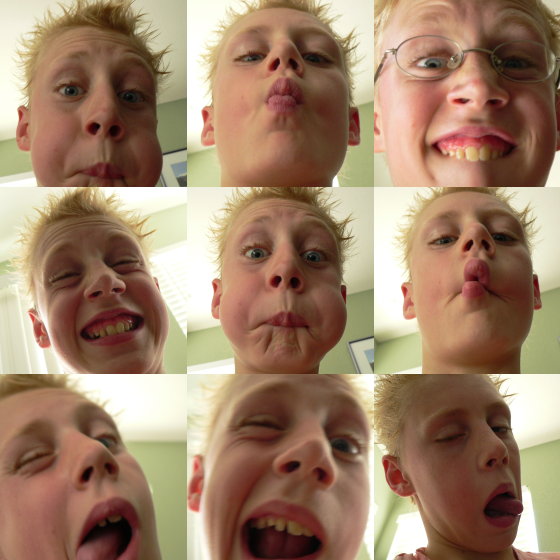 Today we spent most of the day ripping up our house. We moved everything out of the downstairs– shuffling furniture and pictures and all of the little things that build up over time into the basement, the garage, and the upstairs. Then we proceeded to rip the carpet out of the office. 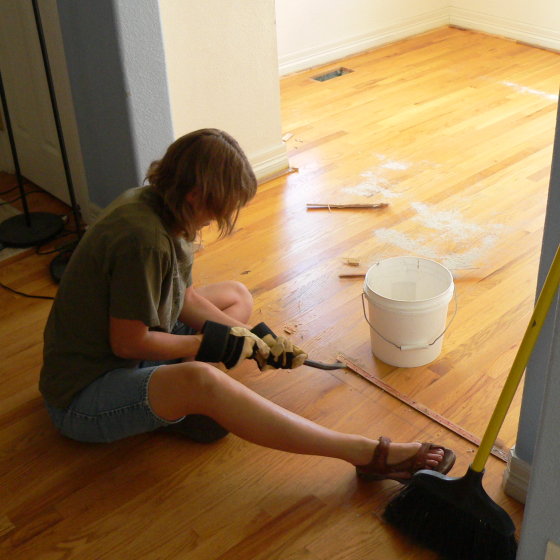 Underneath? The like-new hardwood floor that we covered up when we moved into the house eight years ago. We’ve decided not only to de-carpet the office so it’s hardwood again, but extend the hardwood into the family room. That meant we had to rip out the carpet there too. 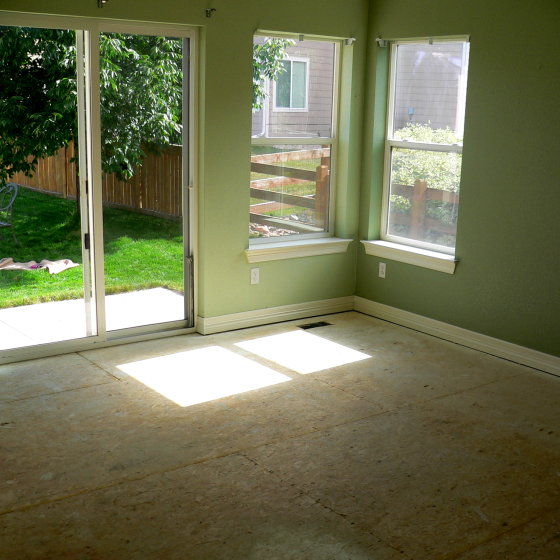 We’ll have new hardwood installed there, and then the entire downstairs will be re-sanded and re-finished. At the end of next week we’ll have a beautiful downstairs smelling faintly of polyurethane, and can move all of the furniture back in place.

Of course this means we can’t actually live in the house for two days next week, since the poly is so pungent and we won’t be able to do anything on the main floor (and thus can’t access the other floors). So it’ll be an interesting week…

This evening we trucked down to Louisville to visit my friend Bill at work. He’s at NetDevil, the company who’s writing the upcoming MMO game Lego Universe. It’s a pretty cool game, wherein players get to design their own minifigure characters, build castles and fortresses and cars and boats and whatever, and race around doing stuff. Although I don’t know a lot of details about the game itself, it was really cool to see how Bill and the other two hundred employees of NetDevil work together to design all of the in-game Lego creations and interactions.

Although I was interested in the programming and the creative side of actually writing a computer game, there was no doubt the kids were interested in the rows upon rows of Lego bricks along one wall of the huge facility. There were literally millions of bricks there. They’re used by the game creators to experiment with models for different portions of the game– after being built and approved, they’re converted to digital models and inserted into the game itself. All of the employees have their own Lego creations scattered on their desks.

We talked with Joel, one of three Builders (not Master Builders, he was careful to point out). His job, quite literally, is to build Lego all day. Sometimes he’s asked to create certain things which will be used in the game– for example, a car or a house. But other times he can sit around making up whatever he wants. His desk and several tables around it were scattered with amazing Lego creations: dinosaurs, spaceships, a model of the Death Star trench (complete with flying X-wings and a Y-wing in the process of exploding), even a full-size broadsword. Everything, and I mean everything, was done with Lego. There aren’t other props inserted into his creations, and he stressed that true Builders never ever use glue to keep things together.

I spotted a model of the Millennium Falcon. It’s the largest, most expensive Lego set currently available for sale. There are actually two of them: a smallish model that retails for around $100, and this behemoth that’s upward of $500. It was enormous: fully three feet long with all kinds of amazing detail.

The highlight of the tour was the end, when Bill took us over by the bins of bricks and invited everyone to build their own minifigure to take home. They had hundreds (maybe thousands?) of sliding drawers full of carefully-sorted pieces. You could choose from probably a hundred different faces, then select from about forty sets of legs and another fifty or sixty chest parts. The most fun was accessorizing: there were hundreds of headpieces, weapons, tools, and just goofy add-on things. I think we spent half an hour picking pieces and laughing about our characters.

Woo hoo! Here’s what we ended up with.

I made King Arthur (note the Holy Grail) and a pirate complete with a parrot, treasure map, and buccaneer sword. 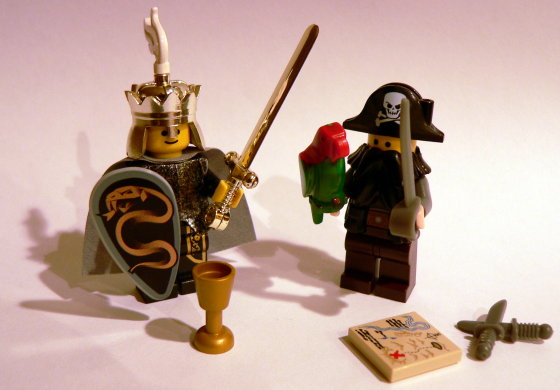 Zack chose a hilarious assortment of stuff and ended up with Boba Fett in swim flippers, Buzz Lightyear with a robotic grappling-hook hand, and some kind of weird robot.

Kyra made some girls. She had a cat (shown here) and a rat (lost somewhere in the van on the way home). There’s even a little book that opens. Who knew? 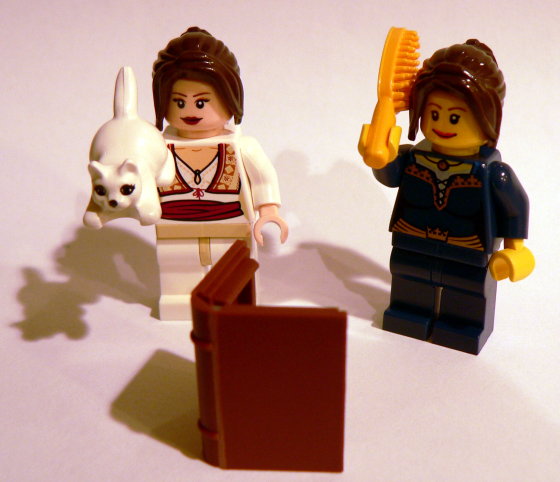 Alex put together some knights, one of whom packs a machine pistol and the other holds a lightsaber and has a speargun for an arm. But hey, that’s what Lego is all about. 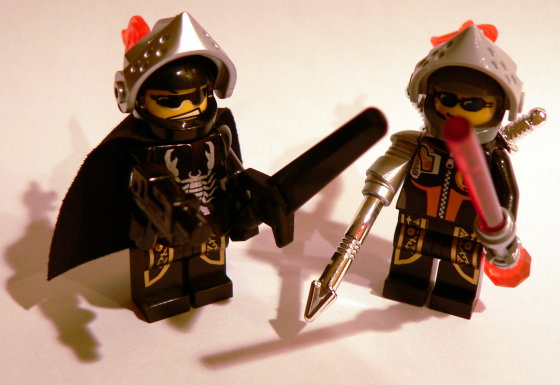 At first Laralee didn’t really get into the spirit of it, because she couldn’t think of what to make. I gave her a few ideas, and she ended up making two characters from her favorite book series, The Hunger Games. This is Peeta and Katniss. 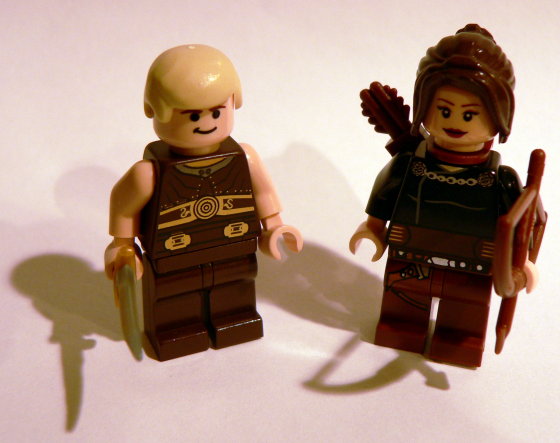 All in all it was an awesome time. Every kid (well, every boy anyway) dreams of designing video games and playing with Lego for a “grown up job”. And Bill gets to do it!