On Saturday I was doing some demolition work in a friend’s basement, banging away at some carpet tack strips, and a little piece of the tack strip (or something) shot up and hit me in the eyeball. It didn’t hurt, but it left a nice bloody mark on my left eye. This is a day later, when it was already looking better: 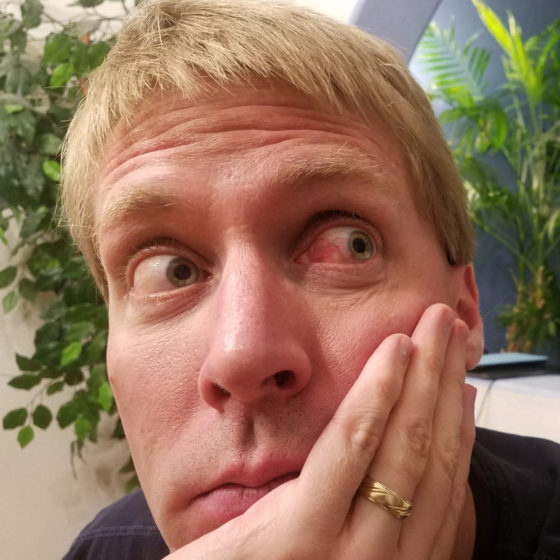 … And that’s why we wear eye protection, kids.

Yesterday I went to my usual game of lunchtime pickup ultimate, but remained on the sidelines due to a neck injury that I didn’t want to aggravate. I brought my camera, along with a telephoto lens, and had some fun taking pictures of the action. 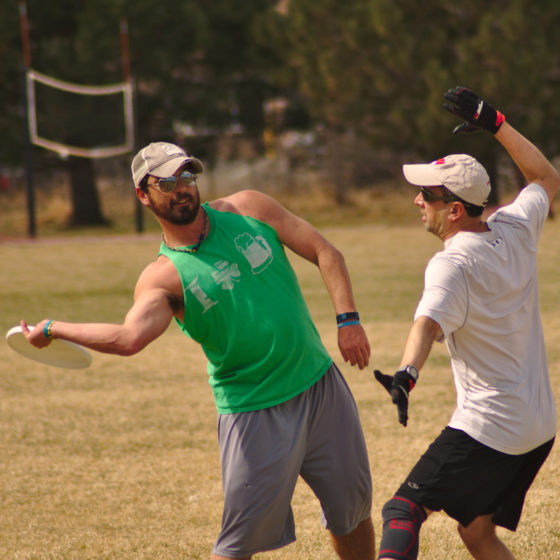 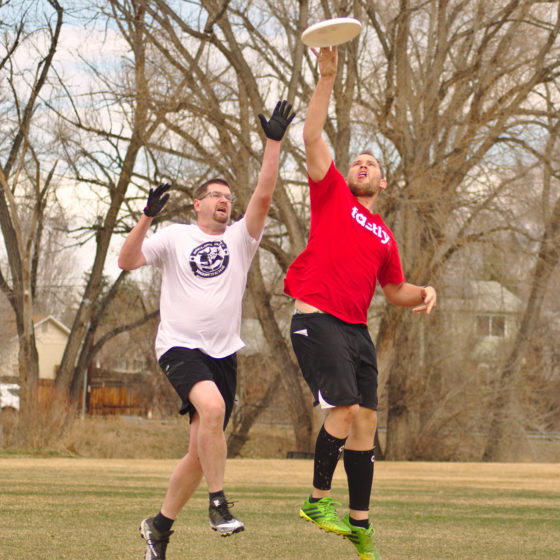 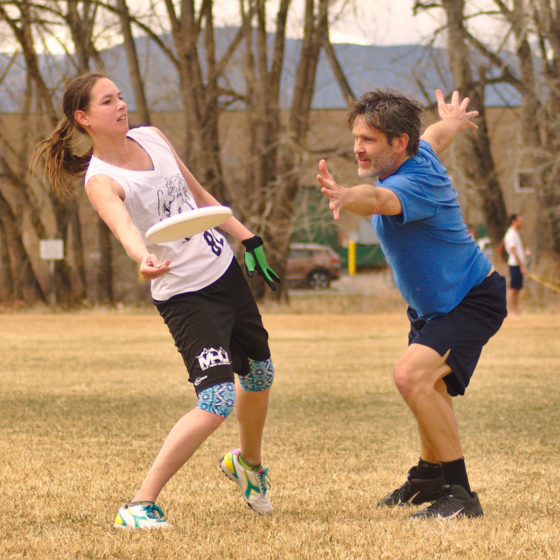 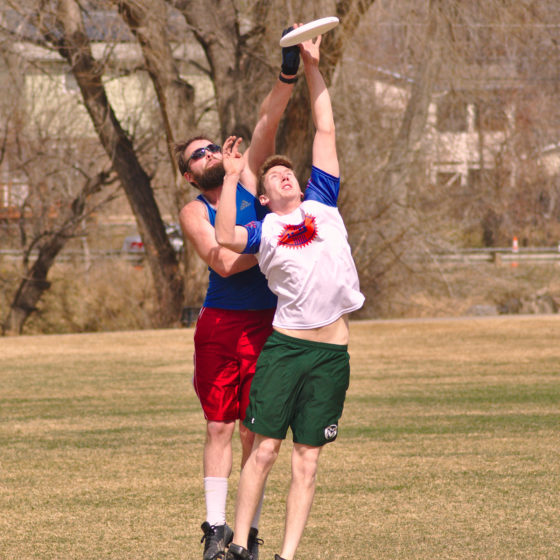 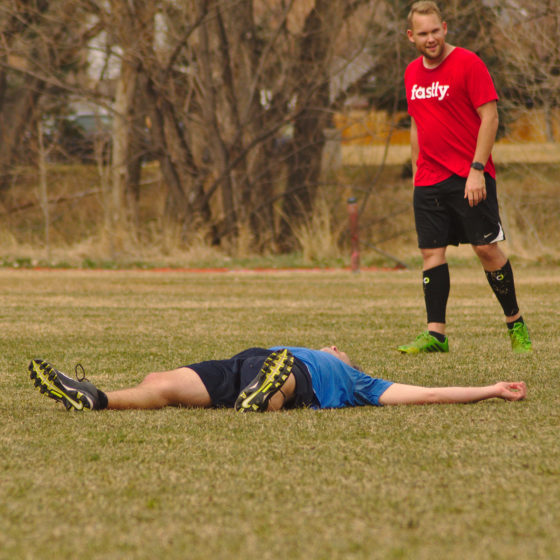 I’m a fan of much of what Yoda says. From The Last Jedi comes another good one:

Pass on what you have learned. Strength. Mastery. Hmph. But weakness, folly, failure also. Yes, failure most of all.

The greatest teacher, failure is.

Ahh, spring break is upon us! It was nice last night to be able to turn off my daily alarm… 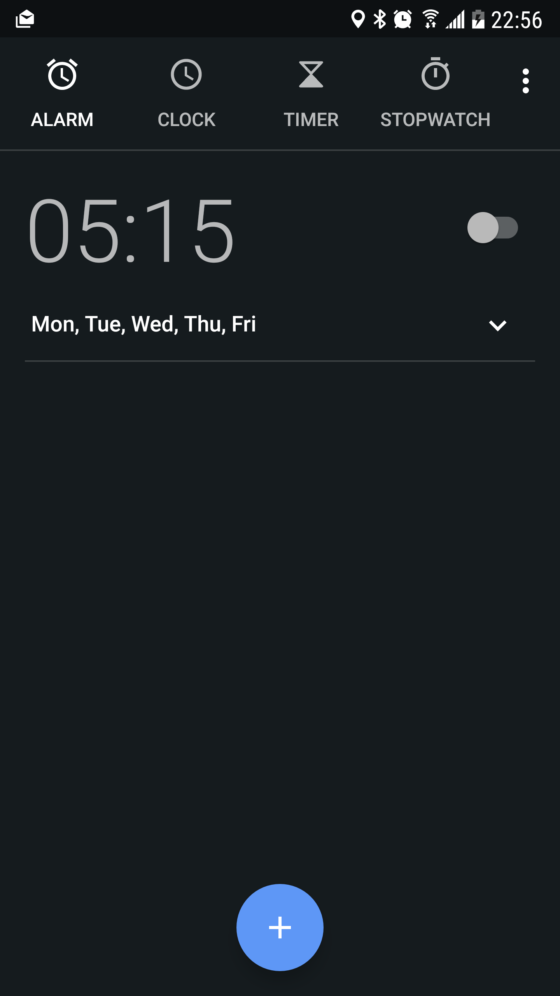 I get a week of sleeping in (luxury!) before going back to my regular schedule. Party!

Last night I made some muffins at home, and this morning I brought them to the office. I mentioned it on Slack, our internal chat tool:

[SCENE: INTERIOR CLASS ROOM, EARLY MORNING]
Jeff: Good morning class, I brought muffins for you today because I am kind, wise and generous!!
Perky Student: Thanks Mr. Schroeder, I love muffins!
Full Mouth Student: What kndt ff mffns rr dey sweader?
Jeff: Blueberry and Chocolate!
Full Mouth Student: [DED]
Perky Student: [SCREAMING] He had a deadly blueberry allergy!!
Jeff [INTERNAL MONOLOGUE]: I guess I have another one on my conscience. At least I can bring these to my loyal staff at work. I hope no one asks why.

(The full story is that I have a young woman in my seminary class who’s allergic to enriched flour, so I buy a muffin mix that doesn’t contain it, and bake a few muffins for her whenever we have food in class. She requested chocolate chips, and even when I said it was a blueberry mix and that would be weird, she insisted it was good stuff. So I made them, brought them to class, and… she didn’t show up. Hence, the office.)

Back at UMR, the annual St. Patrick’s Day festivities were always advertised as “The Best Ever”. I guess every year was an improvement over the last, for almost ninety years in a row. I have some great stories about the shillelaghs, Follies, duty rounds, and of course Alice. Yesterday was a nice day, so Laralee and I headed out for a walk and I grabbed my “green”: 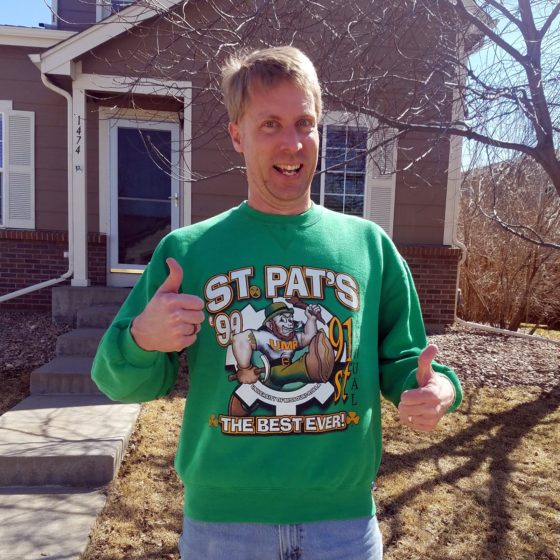 Laralee bought me a shamrock plant for St. Patrick’s Day! 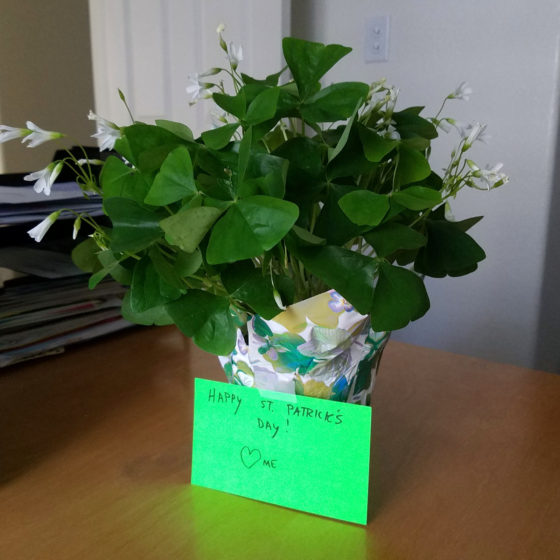 Am I the only one around here who didn’t even know there was such a thing as a shamrock plant? I thought shamrocks were those teensy little clover things…

I just tried to launch the latest version of Firefox.

That’s a lot of bytes.

Driving to my ultimate league games last night, I saw a beautiful sunset. 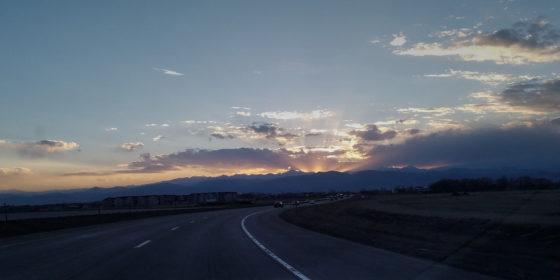 Interestingly, I’d also seen a beautiful sunrise in the morning! (I didn’t take a picture.)

It’s nice to have gorgeous bookends on a great day.

I saw this in traffic today: 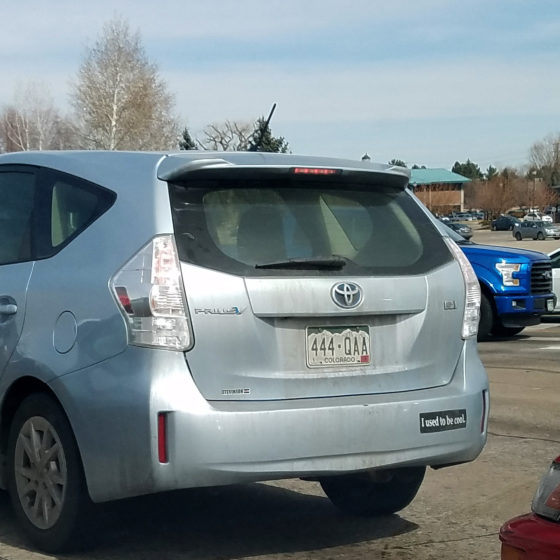 It seems like a strange sentiment to me. I say if you think you’re cool, you’re cool. Fortunately for me, I’m cool. 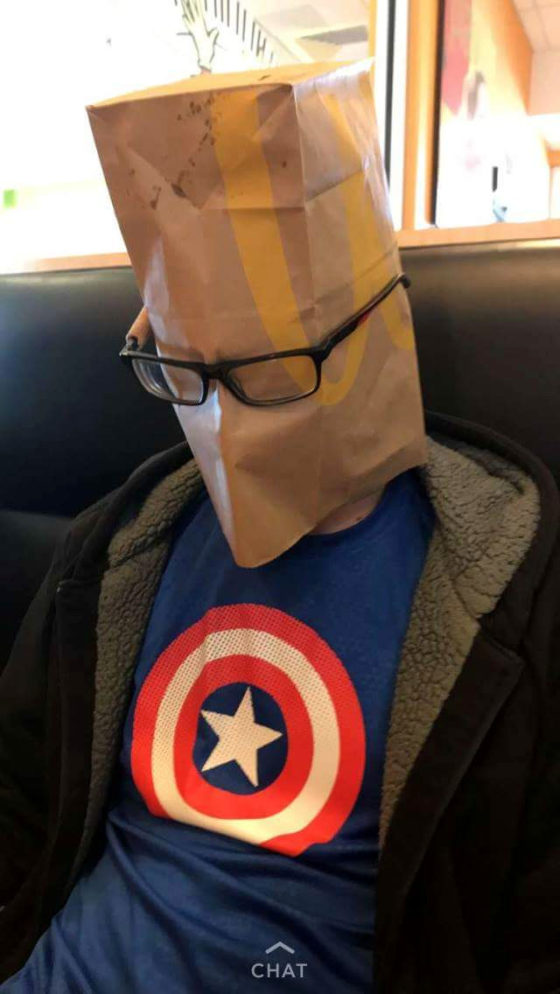 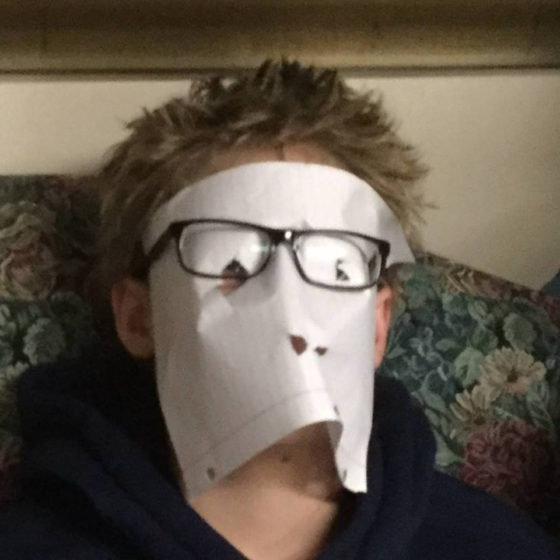 A few days ago, we received a flyer in the mail advertising a PUBLIC AUCTION OF SEIZED ASSETS FROM LAW VIOLATORS. It included tiny photos of a bunch of fancy artwork and jewelry and, of course, a smattering of Rolex watches with names like “The Presidential”.

Yesterday we didn’t really have anything to do in the morning, so we decided to bike across town to the country club where the auction was being held. We’d never been to an auction, especially for SEIZED ASSETS FROM LAW VIOLATORS, so it seemed like it would be interesting. Sure enough, the guy running the show was pretty chatty and entertaining as he prepared to start the auction. The room was actually packed– I was surprised to see so many people there. La and I walked around and admired some of the stuff.

There were a lot of bronze sculptures, ranging in size from the kind of thing you set on the coffee table to the ones you put in your front yard. 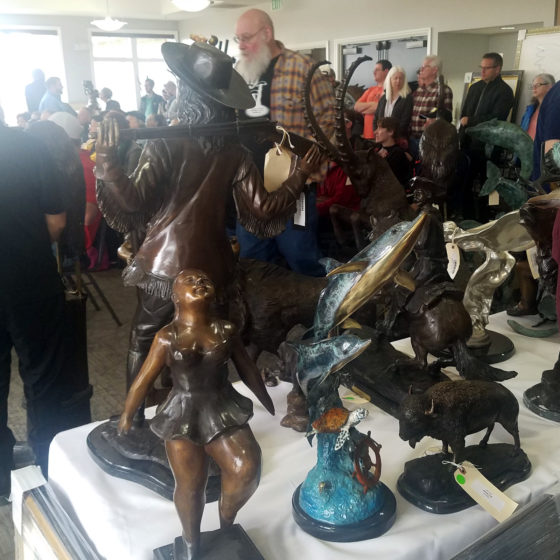 She said she liked this painting, which was doubtless by someone I’ve never heard of: 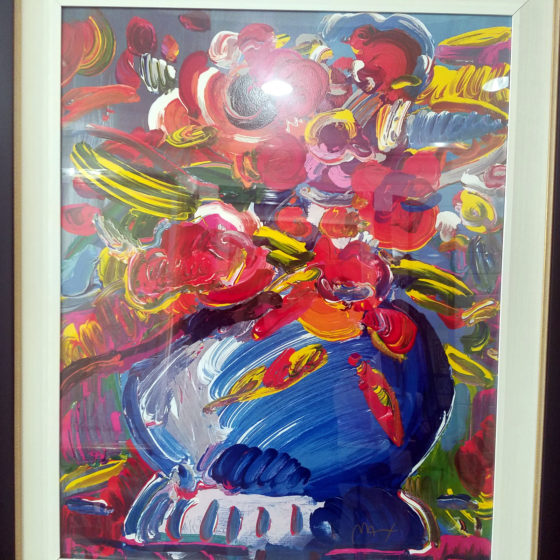 Finally it was time to start, and the guy launched into his spiel about the history of these items. I was interested to hear that many of the works of art came from, in his words, “one of the biggest art heists in recent history” somewhere in Los Angeles. What doesn’t make sense to me is why they didn’t just give the art back to the original owners after they recovered it from the heist. But anyway, he did his best to generate some excitement and interest around completely unknown artists. 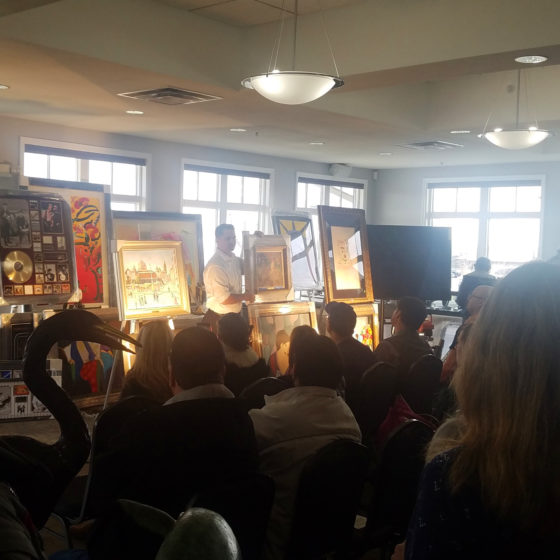 We stayed for maybe 20 minutes, just to see how it went. There were a few breathtaking necklaces– and by “breathtaking” I mean “wow that’s a lot of diamonds and sapphires, but my wife would never wear something like that”. The most expensive item someone bid on was a necklace for $6,500… a different one that was apparently worth $37,000 retail had a starting price (“reserve” as they say in the business) of $19,000 but no one bid on it.

So all in all, it was a fun little experience. Now we know what an auction is like, and we also know what sorts of things we’d never buy for our house.

Things I don’t want to be when I grow up:

The San Francisco Police Department has some sage advice… 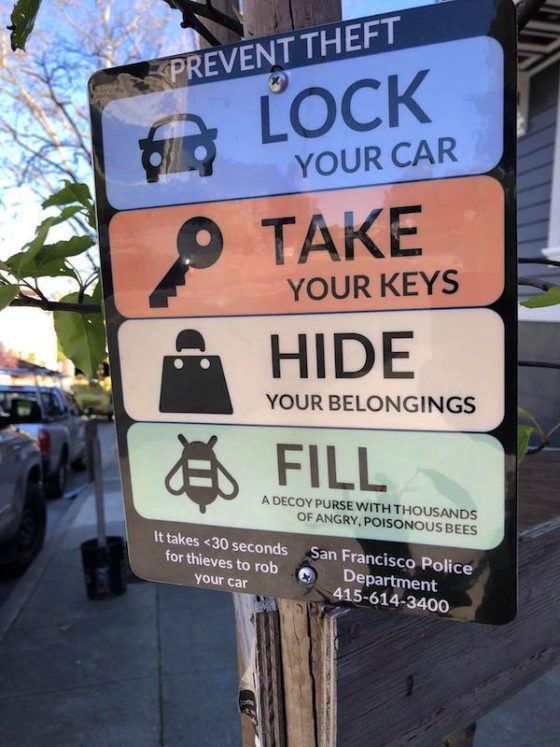 The other day I was collaborating with a friend on some financial reports, and he sent me this message:

I’ll push the report to the wobsite today.

For some reason the misspelling made me chuckle, so I made a little graphic just for him. 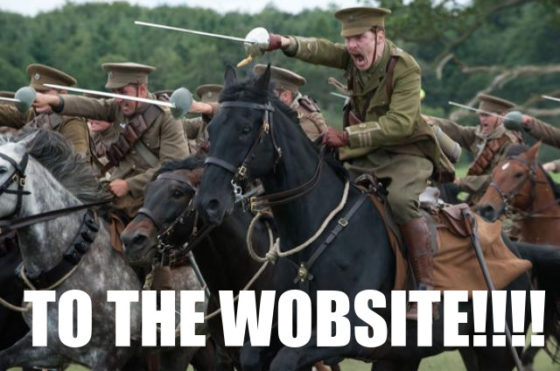 And for some reason my little graphic made me laugh uncontrollably. Laralee always says I’m the biggest fan of my humor. Yeah, yeah. But hey, if you can’t make yourself laugh, what’s the use of clever wit?

Zaque has been shoveling the driveway of an older couple who lives near us. They’ve decided to move to Arizona, so they’re unloading a bunch of things from their home that they no longer need. Apparently the woman, Maggie, called Laralee last week and asked if we wanted their 52″ flatscreen TV, or perhaps their barbecue grill. La said she wasn’t sure what we’d do with the TV, but the grill would be fine.

I was astounded. A free 52″ flatscreen TV? I’m pretty sure we would’ve found something to do with it! Zaque said he would’ve loved to use it as a computer monitor for his video games. I told La that even if we ended up not needing it, we know people who would jump at the chance. But of course by then, Maggie had found a new home for the TV and only the grill was left. Yesterday we picked it up. It’s a nice grill, to be sure, but I think a general life rule is: when you have an opportunity for a free 52″ flatscreen TV, you say ‘yes’.