Back in the swing of things

Spring ultimate season has started! The local group I’ve played with for the past 15 years, Grass Roots Ultimate, is running multiple concurrent leagues this year so I took the opportunity to play in two leagues at once.

On Tuesday nights there’s an indoor league, which is a little unusual but a lot of fun. I’d never played before, but I’d heard it’s a good time, so I signed up. I was invited to be a team captain, so even though I had never done it, I drafted a team and we took to the turf. We play triple-headers every week, and even though the games are only 20 minutes long, they’re intense. It’s very different from traditional outdoor ultimate– it’s much more fast-paced, there are no stoppages of play, and you run flat-out the entire time.

We lost all three of our games, but in each one we did noticeably better, so I attribute it to just getting to know one another and figuring out playing styles. Plus, I kept throwing deep passes that simply don’t work on a field that’s only a quarter the size of a full ultimate field.

I was exhausted at the end of the night, but in a good “wow, that was some workout” sort of way. This is definitely going to get me in shape.

Then on Thursday nights there’s an outdoor league that’s played under the lights at a nice city park in Longmont. It’s convenient: less than a mile from my office, instead of a drive down to Boulder where GRU is headquartered. I’m a captain in this league as well, and I also volunteered to run the entire league. I first ran the league last fall, and it was so much fun I decided to do it again. It means coordinating with the City, managing field space and budgets, organizing the draft, recruiting captains, acting as “host” at our after-game parties every week, and generally being the go-to guy for all of the things that come up in any sports league.

What’s fun about this league is Alex decided to join. He’s played ultimate for years with some friends at school, but it’s pretty recreational and in fact they sometimes play with some goofy rules. He recruited a few friends but none of them really wanted to commit. It’s an adult league but anyone 16 or older is invited. He’s one of three teens in the league, so I’m sure it’s a little intimidating to be playing against a bunch of adults.

We play double headers in this league, and our first games were tonight. The weather was cold and rainy most of the day, but it cleared in the evening and by game time it was still chilly and a little breezy, but considering it’s technically still winter I can’t complain. It’ll definitely be nice to have it warm up through the season, though (we play through the end of May).

Although we lost both our games tonight, just like on Tuesday I saw marked improvement in how we played over the course of the games. Again, we sort of had to figure out who was good at what, and develop strategies to use that. It was awesome to see Alex out there– he was actually really good! I knew he would at least be decent, but he made several fantastic defensive plays, out-jumped one of the opponents in the end zone, and caught everything thrown to him. I’m excited to play on a team together.

To add to the fun, the pickup group I’ve played with for over a decade also has games every Tuesday and Thursday at lunchtime. We typically play two games, or three if we have time. Although it’s just pickup, the level of play is pretty high; in fact, many of the pickup players are in the leagues with me.

It looks like this is going to be a crash course in physical fitness! I’ll be playing nine games of ultimate every week for the next few months, all on two days. How awesome is that? I suppose I’ll sleep well those nights…

Kyra’s on the high school varsity tennis team. She never played tennis until about three weeks ago.

Tonight Laralee and I watched her first home game. She played doubles and the two of them did pretty well, but lost a close match. It’s fun to see her doing something completely new and different, and I’ve already seen dramatic improvement. Maybe by the end of the season she’ll be a regular Martina. 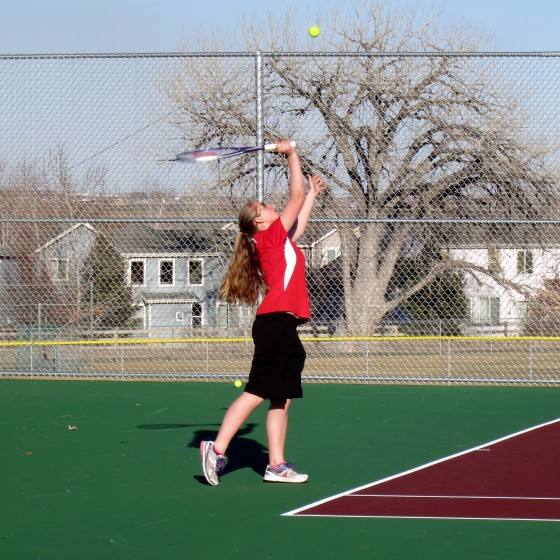 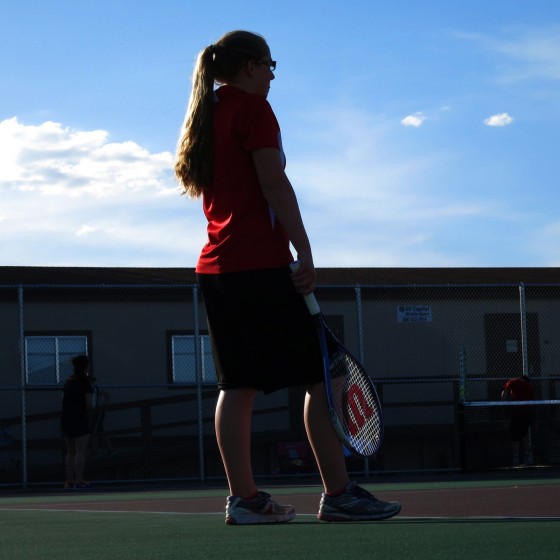 At church our youth group (ages 12 to 18) is involved in a month-long series of seminars called “cotillion”, which is apparently from the French and refers to a formal ball. Cotillion is about manners, etiquette, chivalry, conversation, formal dinners, and dancing. The intention, of course, is to teach the teenage boys how to treat a lady, and the teenage girls how to be graceful. I find it to be an interesting concept, and although I’m completely refined and polite these days, there was certainly a time in my younger years when that wasn’t the case.

Alex and Kyra went through it a few years ago, and neither of them can attend this round because Alex has martial arts and Kyra has tennis practice. They’re not exactly heartbroken about it. Zack, who had no other activities to use as an excuse not to attend, was not excited about it at all. So, in general, amongst the teen group there’s an attitude of grumpiness and resignation about cotillion, but as youth leaders we kept telling them “it’ll be more fun than you think”.

At some point the week before the first session, Zack really wanted something. I don’t remember what it was– maybe it was a snack, or for someone to take care of a chore for him, or to play some extra video game time– but I told him he could have it if he promised not to complain about cotillion for the next five weeks. He agreed. I’ve learned with him that it’s usually best to get it in writing, though, so I put together a little legal contract on a sticky note: 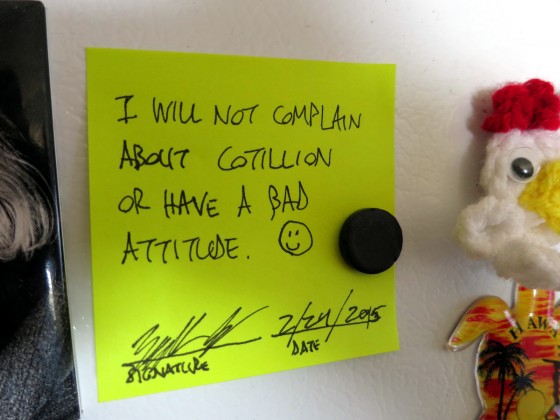 It’s stuck to our refrigerator to remind him weekly that he can’t complain when it’s time to head over to the church for the weekly two-hour session. Interestingly, after the first one, Zack came home with a new attitude. He admitted that it was, in fact, more fun than he thought it would be. Even more surprising, he mentioned that during the dance portion (they were learning the foxtrot that day) he danced with a very nice young lady. Wow. So after that first week, it’s been a lot easier getting him out the door.

Next week I’m teaching one of the seminars. My topic: personal hygiene for the older teenage boys. Yeah, that sounds pretty… exciting, doesn’t it? So for the past couple of weeks I’ve been thinking about how to teach boys the things they should do to attract the attention of the young ladies (in a good way). I came up with a few examples and thought I’d illustrate the point with some photos.

First, don’t have messy hair. I took a picture of myself right after getting out of bed, although unfortunately my hair wasn’t as amazingly bad as it is on some days. 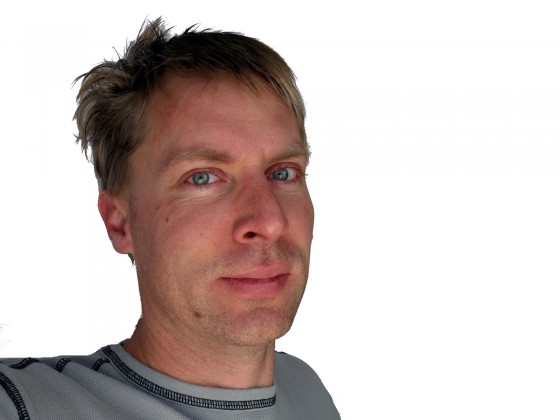 Be sure to clean your ears. Alex used to have a “wax problem” where he’d go for weeks without applying a Q-tip, and after enough time there would literally be thick brown wax oozing out of his ears. Bleah. (Yes, he’s better now.) 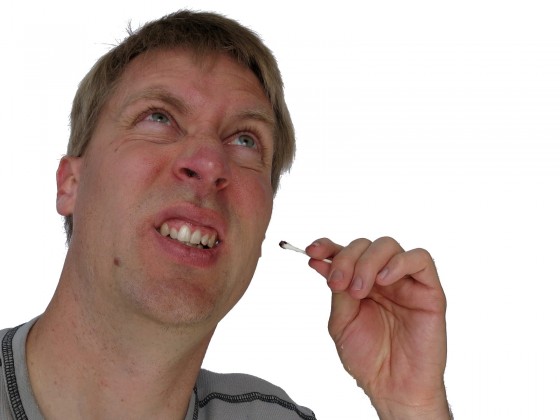 If you nick yourself shaving, use a little dab of tissue to staunch the blood, but don’t forget to remove it before you head out the door. Yeah, I’ve done that. 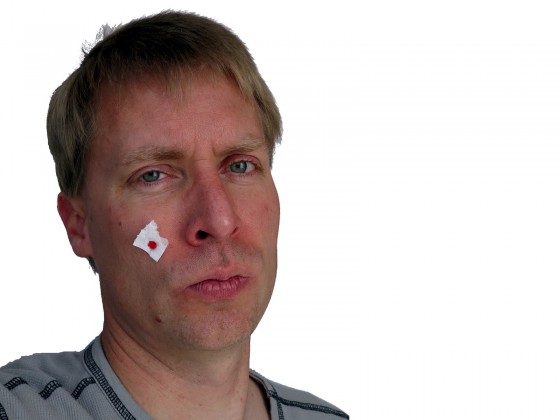 Brush often, and make sure you don’t have food in your teeth. 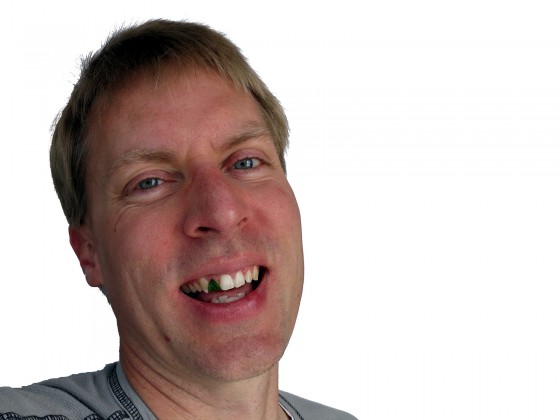 And finally, my favorite, avoid the dreaded “bat in the cave”. The kids and I use that to indicate that someone has a nice booger visible in their nose. For some reason, when you’re talking to someone with a bat in the cave, you can’t help but stare. It’s like a train wreck in slow motion or something. 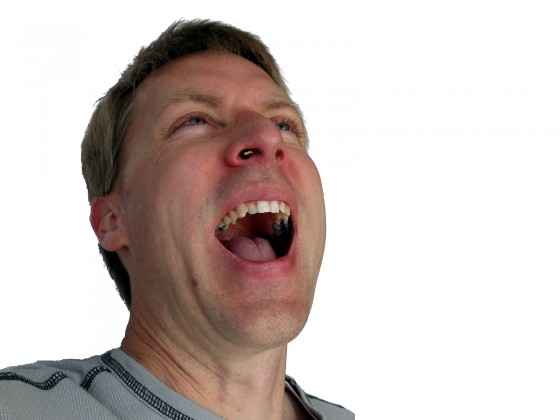 There are some other things I’ll be teaching, including appropriate levels of deodorant, maintaining fresh breath, and yes, even taking showers daily. Hopefully it’ll not only be entertaining, but will help one of these boys enjoy a dance with his dream date.

Sleeping on the stairs

Many years ago we thought it was funny when Zack fell asleep on the landing of our stairs. He would often play with toys there (who knows why) and apparently one day he just crashed.

Anyway, fast forward to last weekend, when some of Kyra’s friends were hanging out late on Friday night. I guess the action was just too much for Hannah and Chaille, who ended up falling asleep on the landing: 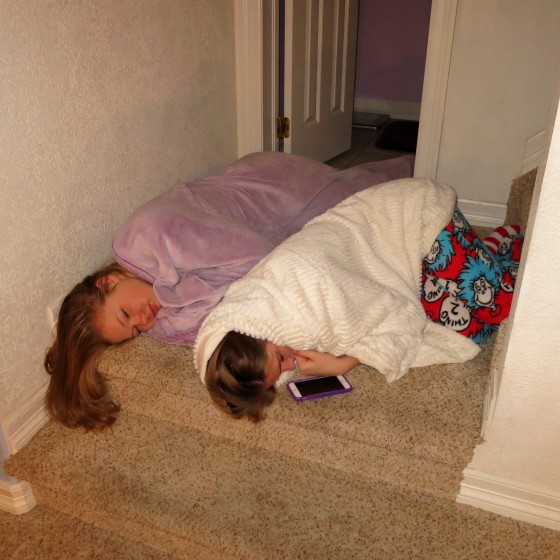 (No, they weren’t just posing for a photo… they were actually asleep.)

Maybe there’s something to the whole “sleeping on the landing”. I should give it a shot. It’s probably more comfortable than sleeping on rocky ground in a tent…