As license agreements– particularly for software– become more and more onerous, it’s nice to see the occasional one that tells it like it is rather than burying it in twenty pages of legalese:

By accessing this Web site in any way, shape, or form, directly or indirectly, you (hereinafter, PEON) grant Neil W. Van Dyke and his duly authorized agents (hereinafter, collectively, NEIL) carte blanche, including but not limited to unrestricted use and abuse of PEON’s personal information, personal property, personal anatomy, and increasingly precarious emotional state.

This agreement may be be altered at any time by NEIL. Quietly changing a document somewhere on the Internet shall constitute notification. It is incumbent on PEON to locate these changes, seeing as how PEON grants automatic blanket consent to any such changes.

Should any part of this agreement be found illegal, the remaining parts shall remain in full force. Parts found merely unethical or tasteless may be doubled in magnitude, solely at the discretion of NEIL.

For some reason our house is Party Central for the neighborhood kids. Today we had (only) six of them over here… there would have been more, but Alex was gone at Scout camp.

Anyway, I was working in my basement office when I heard a blood-curdling scream from somewhere upstairs. Then another. Soon there was all sorts of screaming, so I ran upstairs to find out who had impaled themselves on a plastic lightsaber or whatever.

It turns out all of them were in the bedroom having– you guessed it– a contest.

“Dad,” said Zack, “we just wanted to find out who can scream the loudest.”

Patrick Lawler, a construction worker, went to the doctor complaining of a toothache. It turns out he had accidentally embedded a four-inch nail into the roof of his mouth almost a week earlier. 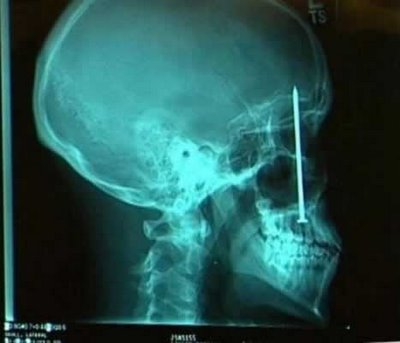 It’s beyond me how you do that and forget about it, but I guess that’s what makes our world interesting…

And yes, after it was removed he was fine.

A few weeks ago I instituted a little session during dinner where everyone in the family has to talk about something they learned that day. It’s a fun way to get the kids to review things from school, and since I read the occasional random news story on the internet I can teach them something totally useless but interesting.

On Thursday we were chowing down and Kyra asked me what I had learned that day. I told her that I’d gone to a chocolate factory and had learned how candy bars are made.

She was incredulous, and after a moment both her and Alex insisted that I was making up the story. I most certainly hadn’t been to a chocolate factory! I think they were envisioning the massive industrial complex from Charlie and the Chocolate Factory, which we’d all watched about a month ago.

Undeterred, I told them how I’d learned that the chocolate is liquefied and pumped through a series of pipes and tanks, squirted into molds, wrapped, and put in cooling racks. Still unbelieving, Kyra ran to the kitchen and poked around the cupboards until she found the two candy bars I’d taken home from my tour. She came back into the dining room, very excited, and told everyone that Dad was, in fact, telling the truth and there were some huge candy bars for all of us!

The complete truth is that I’d been to Chocolove, a company in Boulder that does make chocolate bars. I submitted a proposal to rebuild their web site, and was there to talk with the president and marketing lead. Prior to the official meeting, the president gave me a tour of the facility. It was actually really interesting.

In the end, I think it’s great to take a few minutes each day and ponder what I learned that day. It helps me focus on continually expanding my horizons.

The state of the union.

Of course it’s difficult for me to get past my overall contempt for Bush and see the real message behind his words, but I gave it an honest effort and still found myself unimpressed.

First he talked about balancing the budget. “Look how great we’re doing: we’ve cut the deficit in half! And we’re going to eliminate it in only five more years!” Never mind that the government was running a surplus before he hit the Oval Office, and I guess we’re supposed to ignore the fact that in five years (thankfully) he’ll be out of office so it won’t be his problem. It felt like one of those tired and empty campaign promises we hear every few years from candidates.

His next topic was Social Security and Medicare. I think all of us here agree that SS should be privatized in some fashion, and although he didn’t use that word I’m not sure how else it can be “saved”. I seem to recall him throwing down the gauntlet about Social Security a few States of the Union ago, but nothing has really happened. I can’t believe this time will be any different. Again, I have to rate this as an empty and worthless promise. Well, heck, it wasn’t even a promise– it was more of a challenge to someone, maybe Congress. Who knows.

His touch on No Child Left Behind did in fact leave something behind: a bad taste in my mouth. The program is a disaster on so many levels it’s not worth going into.

Launching into health insurance, he seems to think we can slash taxes of lower-income families so they can turn around and write ever-larger checks to the insurance companies. Even though I’m not an economist it seems to me that we’re not solving the problem here. Losing more tax revenue makes the deficit question even fuzzier. Moreover, the real problem (in my mind) is the out-of-control cost of health care. I read the other day that Gov. Arnold is working on some interesting socialized medicine things in the Golden State, and it sounds like Bush was giving him a nod and suggesting that be expanded. I’m not sure where I stand on that.

Oh, and border patrols. It’s funny to hear Bush, or any politician for that matter, put spin on immigration laws. How do you say “we don’t want you here, you dirty foreigners” without saying it? There’s a problem down south that isn’t going to go away with a gazillion more INS troopers. As with Social Security, this was another revival of a promise/challenge Bush issued a while ago with no subsequent action.

Then we moved into energy conservation, which I strongly support. I agreed with his goals here, but my cynical side questions whether it’ll ever really happen. I fear it will take a serious petroleum crisis to actually push Americans into alternative fuels, so we can sit around and talk about how fabulous solar power is but we only do it while plowing around in our 4MPG trucks. Bush has lofty goals here, and I hope they stick.

It was only a matter of time before we hit the Terrorist part of the speech. Sure enough, when the moment came I heard all of the usual lines: “war on terror”, “nine eleven”, “September morning”. He even quoted Osama with that “death is better” line he’s so fond of repeating. Yawn. Oh, and when he mentioned the brave British police forces who stopped the Evil Plot to blow up trans-Atlantic flights I stifled a laugh: that was the Lamest Plot Ever, it wouldn’t have worked, and it led to the silliness that we have now where I can’t take my lip balm on a plane unless it’s in a one-quart clear plastic resealable bag. To brag about that as a major triumph of the War on Terror is just ludicrous and makes Bush look like he’s desperately reaching for something, anything, to hold up as a triumph.

Did anyone else catch the part where he shifted gears and talked about how Iran is a breeding ground for more Bad Guys? It was very smooth. I expect more attacks on Cambod– err, I mean Iran– very soon now.

It’s hard to say, but I think the Terrorist part of the speech lasted as long as everything else combined. In the end it just felt like he was pulling out every catch-phrase and emotional term to justify a move that’s almost universally condemned. I don’t think he changed any minds with his appeal for support. He needs to listen to those generals with whom he “consulted closely”, rather than defying them and the commission.

All in all, I was disappointed but not at all surprised. It’s the same rhetoric, the same spin, the same failed policies. There’s nothing bright and shiny on the horizon, kids, so let’s all go back to slogging through the morass of bloated government, hyper-inflated health care, slaughter and destruction, and fearmongering.

Sigh. The state of the union.

It seems like some of our leaders have most certainly lost their perspective. Here’s a funny illustration of it. 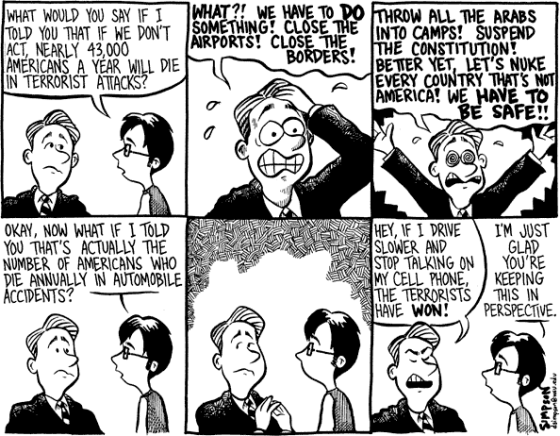 I noticed this on a bag of marshmallows today: 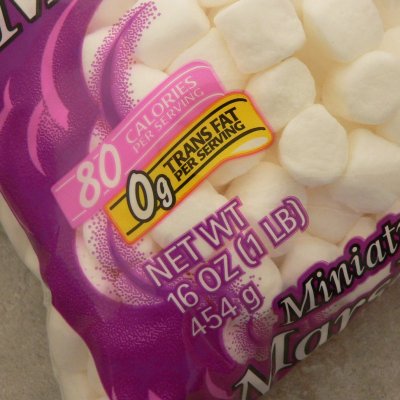 So now they’re advertising the calories and lack of trans fat, as if the person reaching into the bag cares. They’re marshmallows, for crying out loud! If I’m the kind of guy who cares about my trans fat intake, you can be sure I’m not stuffing marshmallows down my gullet!

“I want to hang a map of the world in my house. Then I’m going to put pins into all the locations that I’ve traveled to. But first, I’ll have to travel to the top two corners of the map so it won’t fall down.”

In Tennessee, you can purchase a stamp from the Department of Revenue and affix the stamp to your bundle of weed or your vial of crack or whatever illegal drug you happen to be using today. Then, of course, you pay a tax to the state based on the street value of your illegal substance. This is the law, and if you’re caught with drugs but no stamps, you’ll be fined up to ten times the cost of the product.

Even more amazing, Tennessee has made $3.5M from the program. That means people are actually getting these stamps and paying their taxes like good little citizens. Wow.

From a legal standpoint, it seems like getting caught with unstamped drugs puts you in double jeopardy: you’re prosecuted for having the goodies, and you’re also fined for not having the stamps. Surely someone will be in court and argue that it’s unconstitutional, which would be an interesting way to get out of a drug charge.

From an economic standpoint, it’s just plain funny. Since having stamps doesn’t make you immune from criminal possession charges, the only reason you’d buy them is so if you get caught your fines are smaller.

Ahh, how I love our country.

Wow, it’s been cold around here. But when I saw our thermometer: 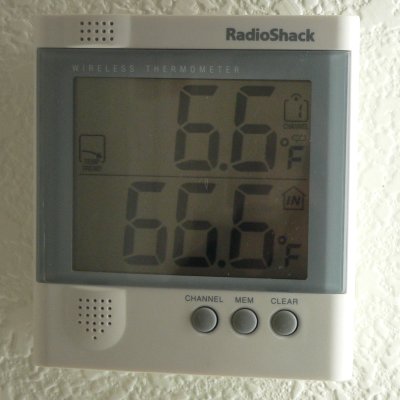 I figure it’s a sign of Armageddon or something.