I owe HOW much?

Thanks for the helpful billing notice, CenturyLink! 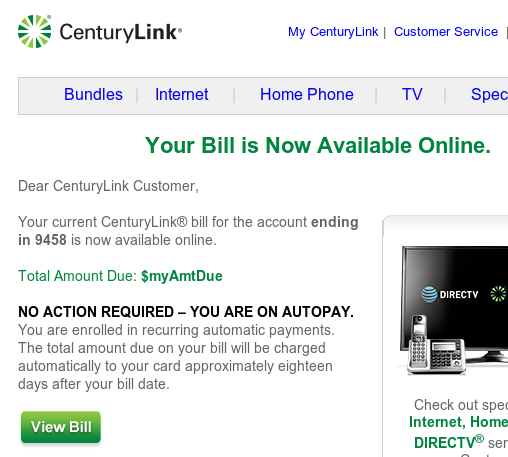 I guess it’s a good thing I’m on auto-pay, because I’m not sure how much $myAmtDue would be.

Come on, CenturyLink, get it together…

Laralee just sent me this:

I found the house key down the crack by the dryer and I found a King Soopers gift card in the shoebox on the dryer that has $58.52 on it. Woo hoo!

Not only did she find the house key we lost months ago, but now we’re rich, too!

Fresh Cheetos are the best Cheetos

I’m sitting down to start working on my seminary lesson, and decided to have a bowl of Cheetos. You know, to get the creative juices flowing. So I tore open the new bag and poured myself a bunch. 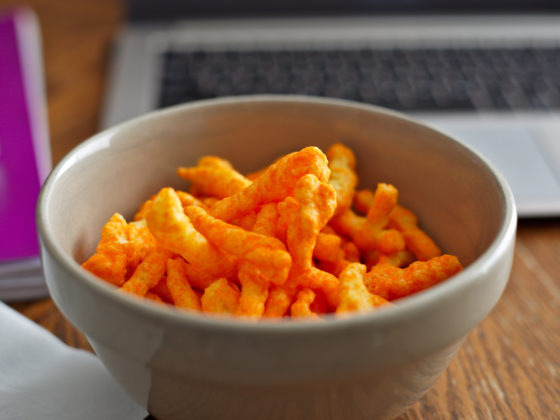 Of course it’s a scientific fact that the best Cheetos are the fresh Cheetos, right out of a new bag. I’m sure these will help me prepare a great lesson.

Workin’ for a livin’

Zaque had a full-time job working as a camp assistant at the YMCA over the summer. He made good money, and as a result he was flush with cash for those few months. After tucking half of his income into a savings account (Mom and Dad are such killjoys, right?), he was free to spend the remainder on whatever he wanted. It turns out what he wanted was video games, video game add-ons, computer hardware for video games, and the occasional bag of Hot Cheetos or Takis.

As the summer came to an end and the camp wound down, we told Zaque he was welcome to get another job– perhaps at the YMCA– if he wanted to continue spending money at that rate. He chose not to, and the school year started. Not surprisingly, the financial well quickly ran dry. He was still going out to lunch with friends, and after a bit of questioning we learned that his friends had been supporting him. I told him it’s not cool to be a mooch, and he needed to either figure out how to pay his own way, or stop going out to lunch with friends.

Clearly there’s only one choice there, so he shopped around for another job and landed one at Get Air. It’s a trampoline park in town, and they needed some responsible teens with gymnastics or trampoline experience. Zaque had the experience, and apparently in the interview he managed to convey some semblance of responsibility, so they hired him.

He’s been there for a little over a month now, and he seems to enjoy it. Before his first day, he had to watch nearly forty training videos on YouTube, and answer some questions about them. They were the usual things about how to administer first aid, how to be a good example, and presumably how to set bones that break after crazy accidents on the trampolines. My favorite safety video, though, was the one about Foam Pit Extraction.

A Foam Pit Extraction is apparently what happens when a kid launches off a trampoline and lands in the foam pit, but can’t get back out for whatever reason (most likely broken bones). So now, every day after he comes home from work, I ask him if he did any Foam Pit Extractions. To date, he hasn’t.

Also, I think Foam Pit Extraction would be a great name for a band.

“Why are there are so many songs about love but only one about welcoming me to the jungle?”

There’s a shark behind you! 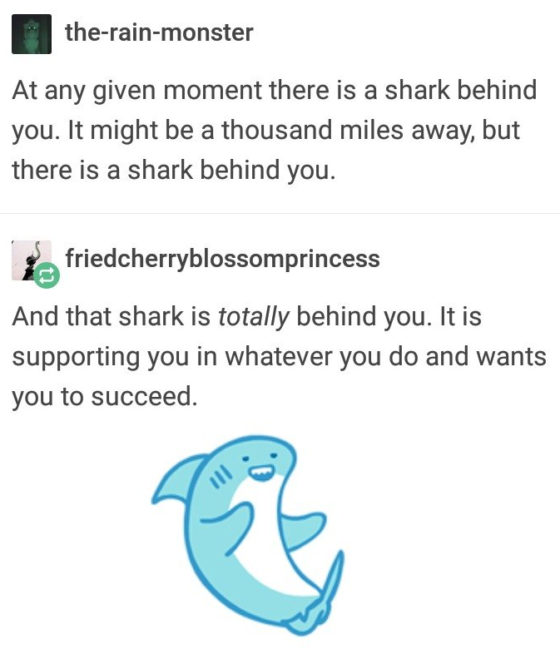 I don’t think it’s supposed to look like that

Last night, Zaque was heading out to a friend’s house. He ran into the garage, hit the door opener button with his elbow, climbed into the car, and slammed it into reverse.

Unfortunately, he hadn’t noticed that when he hit the garage door opener button, the door didn’t actually open. Needless to say, the car didn’t get very far. 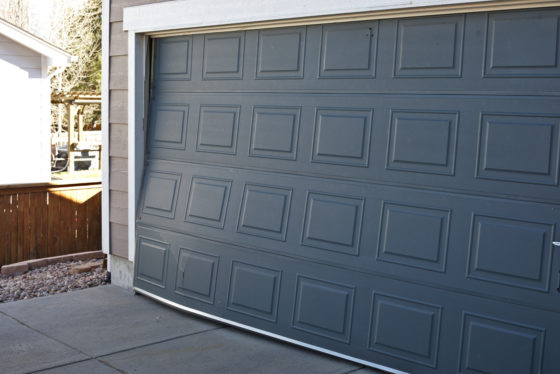 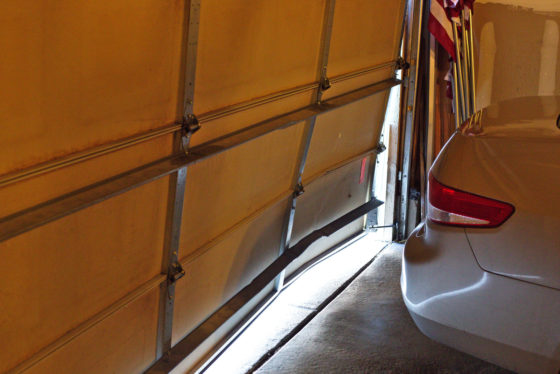 I admit I’m a little puzzled about this: 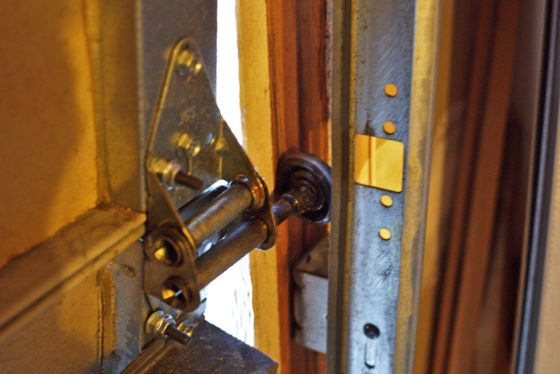 Although the track isn’t damaged, and the wheel and axle aren’t damaged, somehow the wheel ended up outside the track. I’m not sure how that’s going to get fixed. So, for the time being, our car is trapped in the garage until I can get someone out to the house to fix this.

I did tell Zaque the bad news: incidents like this have consequences. We’re going to make fun of him backing into the garage door for many, many years.

It was seven years ago that we bought a gigantic block of chocolate and made some Christmas candies. The remainder has been sitting in the basement all these years, even after using some of it two years ago. Today I decided to use the rest.

I peeled a hundred or so caramels, warmed the chocolate over the stove, and went to work. 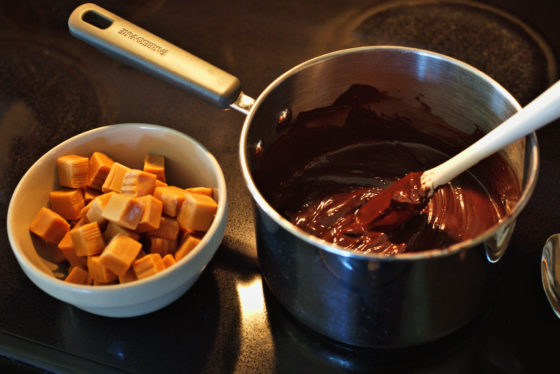 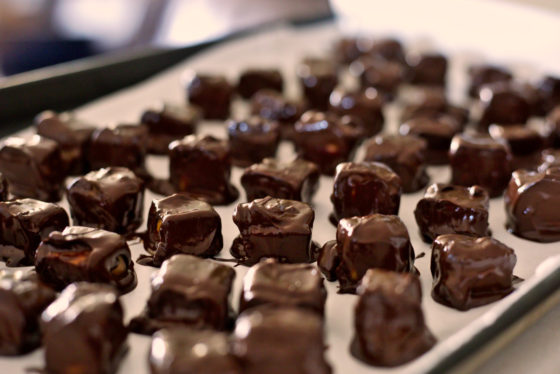 … but hey, who cares how they look? They’re chocolate and caramel! 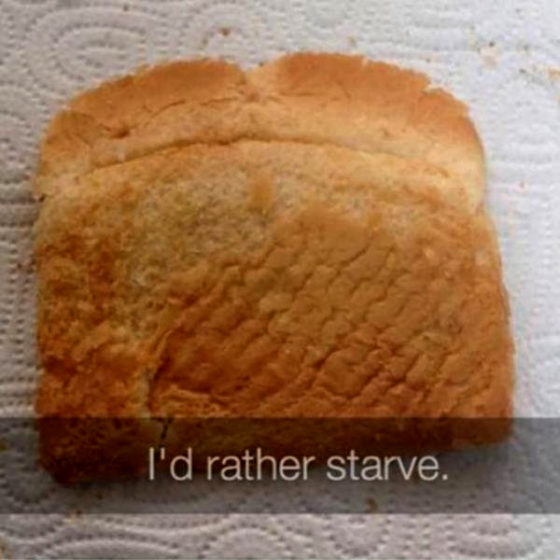 About 18 years ago, I built a full Linux system from scratch. I downloaded source code, compiled everything, created a set of custom scripts and management tools, and called it Jinux (for “Jeff’s Linux”).

At its height, Jinux powered over a hundred servers at BitRelay and a few client offices. It worked fabulously, and had far fewer packages (and thus potential vulnerabilities) than the commercial Linux distributions. I used it for my main desktop and laptop systems, running KDE3 for years and years.

Everything has been going swimmingly, but to be honest, it’s become tiresome to keep track of package updates and security patches and whatnot, and continue to apply them to my Jinux distribution by recompiling and reinstalling things. It’s just one of those things that takes time and, while interesting, probably isn’t a good use of that time. I know Linux inside and out, and have well over two decades of experience with it, so I don’t feel like it’s necessary to continue digging into its guts.

And thus I finally decided to walk away from it. I wiped my Jinux systems and installed Ubuntu. But KDE has evolved quite a bit since version 3 (which dates back to the late 90’s), and I found that several of the key software tools I used no longer worked well. Most importantly, email was a hot mess because the latest versions of KDE are based on a search platform called Akonadi. After considerable experimentation, I was reminded why I hate Akonadi with the fiery passion of a thousand suns, and I decided to migrate all of my email out of KMail (which I love) into Thunderbird (which is decent, but not nearly as good as KMail). The migration was a little painful, but it worked. For about a week I used a sort of Frankenstein mix of KDE, Thunderbird, and other applications, but I grew increasingly frustrated because things didn’t work quite the way they did in good ol’ Jinux.

I messed around with Mint Linux for a day, and looked at some other desktop environments, but realized that KDE3 continues to be my favorite by far, and it’s just rock-solid. So I wiped my Ubuntu systems and rebuilt them with Trinity, which is a repackaged version of KDE3 for the many people in the world who, like me, prefer that old version over the shiny new one.

Again, some configuration magic had to happen, and I migrated some things, but I finally reached a point where my systems were happily running Ubuntu and KDE3. Now I don’t need to worry about software updates, or compiling code, or tracking down dependencies. Life will be marginally simpler… although I’m a little sad to bid farewell to my home-grown Linux systems that have served me so well for nearly two decades.

Hey, at least it’s not Windows…