I’m using an electronic payment site to pay some taxes. This is what I see: 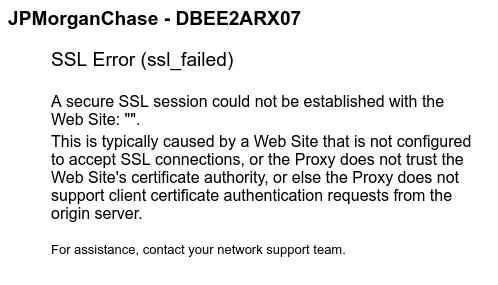 The error has been appearing since early this morning– probably six or seven hours now. You’d think a bank like Chase would be able to figure out this whole web security thing.

I’m pretty sure that’s not today 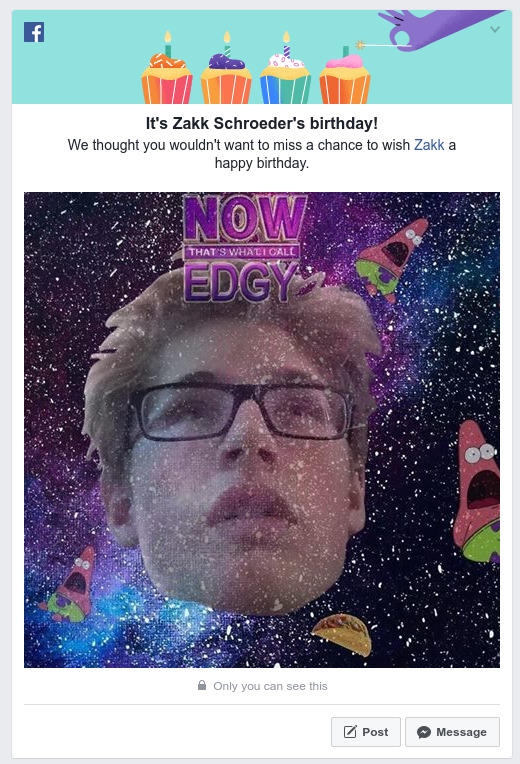 At first I was confused because I’m pretty sure today isn’t Zaque’s (Zakk’s?) birthday. But then I was simply mesmerized by the amazing photo, and got lost in the stars. And flying space tacos.

The early bird gets the TP

One of the kids in another seminary class has been frustrated of late because someone keeps TP-ing his Jeep. Every few days it’s covered again– sometimes at school, sometimes at home. He doesn’t know who’s been doing it.

This morning I decided that everyone who showed up on time for my class would get the special opportunity to help frustrate him some more. So we went out in the frigid morning and took care of business. 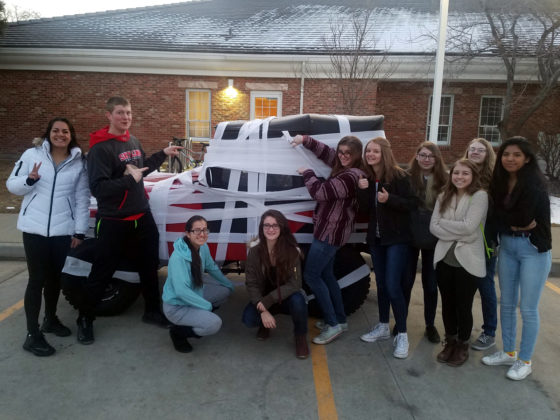 I may not be setting a good example for these high schoolers, but at least we’re having fun.

With tax season upon us, I was fascinated to learn that the IRS has a single computer system which contains the tax records for all U.S. citizens. It’s called the “Individual Master File” system, and here’s a brief description of it from the GAO:

U.S. Department of the Treasury Individual Master File – The authoritative data source for individual taxpayers where accounts are updated, taxes are assessed, and refunds are generated. This investment is written in assembly language code– a low-level computer code that is difficult to write and maintain– and operates on an IBM mainframe.

Now, the word “mainframe” triggers some memories for me of my early college days, when the university had a mainframe and you’d log into it from a handful of VAX terminals scattered around campus. They were honest-to-goodness green-screen VT100 terminals.

But the IBM mainframe managing the tax records of the entire IRS is a bit older than that. It’s been running since… wait for it… 1950. That’s right: fifty-eight years and still going. Wow.

There’s a second system called the “Business Master File” which contains– you guessed it!– the full tax records of all U.S. corporations. It, too, has been running since 1950.

One other thing the GAO noted: the Department of Defense has a system called the “Strategic Automated Command and Control System”. That sounds scary. The description:

This bad boy is much newer than those clunky old IRS systems: our entire nuclear arsenal is running on a computer built in… 1953. There must’ve been some sort of upgrade along the way, since 8-inch floppy disks didn’t hit the scene until the 1970’s.

The obvious question is, “Well, are the IRS and DoD going to upgrade these dinosaurs?” The IRS says nope. I think this is a case of “if it ain’t broke…” and, as a software developer who’s been involved with a few major system upgrades, I can attest that sometimes it’s indeed better to just leave an old tried-and-true system in place. The Defense Department has plans for a new system that will include extravagances like desktop terminals, but it’s unclear when that upgrade will actually happen. With the way things work in that department, I’m guessing it’ll take at least a decade, involve half a dozen cost and schedule overruns, and end up costing dollars measured in the billions.

The other day I went to Firehouse Subs for lunch. I was wearing my Cat Riding a Rainbow-Barfing Space Shark shirt, and when the cashier taking my order asked for a name to put on the order, I said in a movie-preview-announcer voice, “Shark Rider”.

The guy making sandwiches behind the counter laughed. He said “It’s hard to make your sandwich because I’m so amazed by your shirt.” Yep. We talked about how awesome it was for a moment. As I went to my seat in the restaurant, several other patrons were staring at it. When I told Laralee later that day, she said she would’ve been mortified. She doesn’t understand how I can wear stuff like that in public.

I’m pretty sure deep down she’s secretly jealous of my shirt.

Tomorrow Zaque will be teaching not one, but two lessons at church. The first is in his Sunday School class, and the second is in his young mens’ group. Laralee and I were asking him whether he’s prepared (since it’s now Saturday evening). His response:

Everyone better bring three pairs of socks, ’cause I’m going to blow the first two off.

1. You shall not ask if it’s okay to have a Chinese Fire Drill. You shall simply announce it. Loudly.

2. If you hear someone announce a Chinese Fire Drill, you must participate. Even if you’re the driver.

3. You shall not plan a Chinese Fire Drill in advance.

Apparently there was a Situation the other night– which he’s still upset about– wherein all three rules were broken. Oh, the travesty.

You know it’s going to be a good day when you plug in three USB peripherals blindly, and all three of them are the right way.

One of our favorite family games (sorry Mom!) is King of Tokyo. Last night we were playing, and Zaque managed to get a few power cards early in the game that led to a cascading flood of cash (well, technically energy) so he could buy more cards. By the end of the game, he was sitting on so many powers he had to review them every turn to figure out how much damage he was doing… 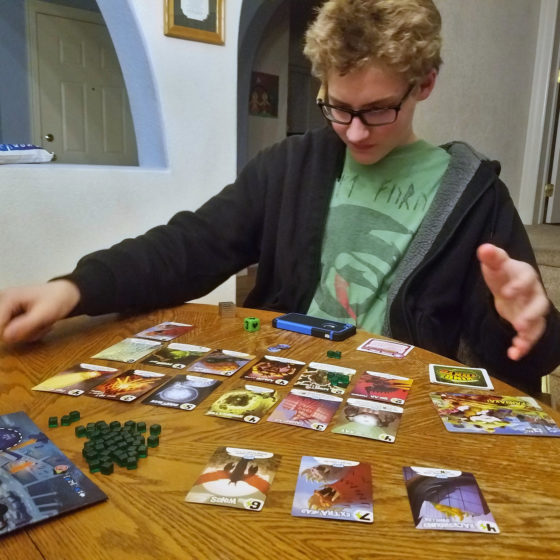 I’d been eliminated at this point. Laralee almost beat him with a strong roll of five claws, but Zaque managed to squeak out of certain death and eventually win. The funny part: he won with 20 stars, which is (in his words) “the coward’s way”. He was actually forced to win that way, rather than by slaughtering everyone else.

I don’t remember seeing anyone sit on that many power cards at once. I guess last night, he truly was the King.

True to what we said in our riveting work conversation the other day, both Noah and I ordered the Cat Riding a Rainbow-Barfing Space Shark shirts. They arrived yesterday, and we both wore them to the office today. 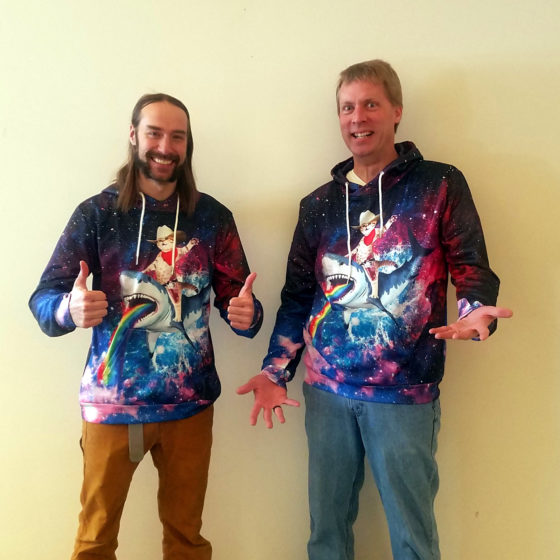 I will say this: it’s a surprisingly comfortable and apparently well-made shirt. My expectations were pretty low, so I was pleased that it turned out well. And now I have a shirt that’s breathtaking to behold, and sure to start conversations.