On today’s episode of How Stuff Works, I let the kids tear apart a couple of old broken hard drives I’ve been keeping in my Computer Junk Closet for way too long. They thought it was a great adventure, and they took to the task with relish. For a solid half-hour, they worked with the screwdrivers to unscrew everything they could find, and then I helped them open up the drives (one required some pretty serious leverage to pry open the case).

It’s fun to let them experiment on stuff like this. Originally I was just going to do it with Alex, sort of as a Guy Thing, but then Kyra wanted to be a part of it and when Zack saw what was going on he grabbed a screwdriver and dove into the action.

Ahh, the joys of How Stuff Works! Now I need to find some other broken-down electronics somewhere in the clutter… 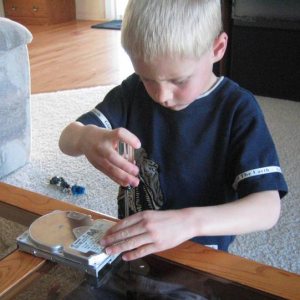 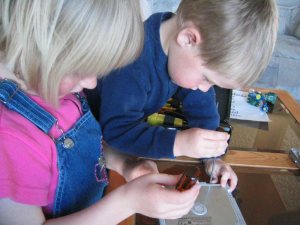 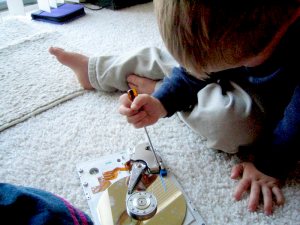 I’m reading Jon Krakauer’s book “Into Thin Air”, which is a first-hand account of a disastrous trip to Mount Everest. The book is very well-written, and certainly educational as it explains everything from the layout of the mountain to the religious habits of the indigent Sherpas.

But one message it conveys unmistakably– at least to me– is this: never, ever, under any circumstances go and climb Everest.

Krakauer’s descriptions of what high altitude does to the human body are sobering. Everything from persistent headaches to lungs filling with bloody fluid, from cracked skin that won’t heal to the inability to sleep for lack of oxygen, sends a clear message that people just aren’t meant to function at the same altitude that commercial airplanes fly.

Nonetheless, it’s good reading. I assured Laralee that I wouldn’t be aspiring to trek to Nepal any time soon.

In answer to a “contest” (okay, actually it was a dare) from my friend Bech, I did a little image processing work tonight– like I had nothing better to do or something– and came up with some classy shots involving my friend Derek.

Here’s a particularly good one, showing him as a boy-band cutie (he’s second from left, if you can’t discern my masterful image handiwork). 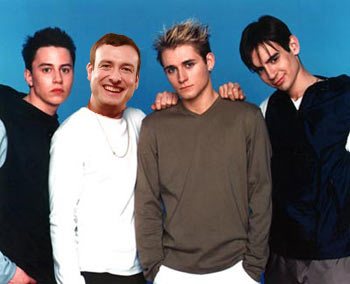 Whoa, here’s someone who must be a lot of fun on dates. 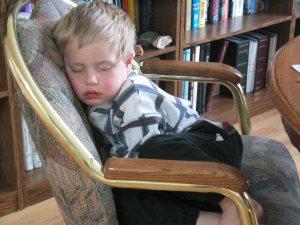 I just finished reading Neal Stephenson’s book “Crytonomicon”, which is widely considered a classic piece of fiction. I bought it for precisely that reason, and although I don’t think it was an absolutely fantastic book, it was– in a word– interesting.

It’s probably one of the longest single books I’ve ever read. It masses almost 1,200 pages of rather small type, and when I first picked it up I was daunted by that. (A book that long had better be worth the time to read it!)

Something sort of unusual happened while I was reading it: when I started, I was fairly unimpressed with it. I often told Laralee, “This is supposed to be a classic, but so far it’s pretty confusing / boring / slow”. As I continued to read, the various story lines started to come together, and by page 800 or so I was finally beginning to see the Big Picture of the plot.

Around page 1,000 things were a little more riveting, and by the last page I was satisfied that although it wasn’t spectacular, it had been worthwhile. I suppose in a way it was like the movie “The Sixth Sense”, which Laralee and I repeatedly thought we should stop watching… but we gritted our teeth and got to the end, which made us really glad we’d stuck with it. I suppose sometimes the ending can be worth the arduous journey.

And there was much rejoicing.

After a couple abortive attempts to set up spam blocking and virus checking on my mail server, I finally succeeded last night. No more irritating “Is this your document?” attachments, whee!

Although I’ve been filtering spam locally, it’s somewhat annoying because I have to download the message and then drop it into my ‘Spam’ mailbox if it looks like a live one. Now, the server takes care of that for me– it just trashes the message, and I never see it here.

Of course this doesn’t mean I don’t get any more spam at all, because I had to keep the filters somewhat lenient so I don’t inadvertently delete false positives for my clients. But it’s sure nice not to have a hundred “known” spam messages a day flowing into my mailbox…

I had a lot of fun skiing last weekend with my old college friends Sarah “Sweet Thang” Hummel and Brad “Bo Brad” Shores… the only problem was I neglected to put on some sunscreen, and there was nary a cloud in the sky and I was up around 10,000 feet most of the day.

Thus, afterward I was pretty toasted. And a day later I looked like a raccoon with leprosy– the area around my eyes was white (sunglasses) and the rest of my face was peeling nicely.