Just when you thought the War on Terror couldn’t get any stupider, you read a story like the one about terrorist-hunting dolphins (quoted from Associated Press):

About 75 dolphins and 25 sea lions are housed at Naval Base Point Loma in San Diego Harbor as part of a Navy program to teach them to detect terrorists and mines underwater.

Holy cow, underwater terrorists? That seems pretty dire. I can’t even imagine the conversation that led to this development. Were there a bunch of analysts sitting around a big conference table, talking about the dire threat of underwater terrorists, when one of them hit upon this brilliant idea?

“Gentlemen, I have it. We’ll train dolphins to find them!”

But that’s not all. Working in conjunction with the dolphins are– you guessed it– terrorist-hunting sea lions!

The sea lions carry in their mouths a cable and a handcuff-like device that clamps onto a terrorist’s leg. Sailors can then use the cable to reel in the terrorist.

That’s right, ladies and gentlemen… the sea lions who bark for fish at your local zoo can also attach handcuffs to an underwater terrorist so sailors can “reel him in”.

(Shown here is a photo of a different but related program, where the Navy actually attached laser guns to dolphins. Yes, this is completely real.) 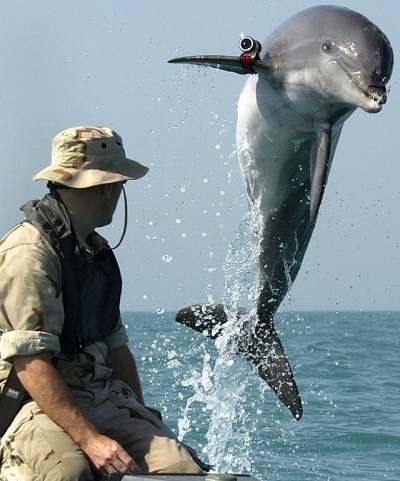