For the last five or six years, my operating system has been Jinux– a custom build of Linux that I designed and created from scratch. No, I didn’t write the software, but I did write hundreds of compile scripts, a package management program, initialization software, and everything else you’d need to compile and install a full working Linux desktop or server. It was a marvelous thing. I used it on dozens of servers and a handful of desktops, and basically every hour of every work day was spent using Jinux software I’d built.

Over time, however, the mainstream Linux distributions have been getting nicer, easier to use, and (most importantly) easier to manage. Gone are the days of doing manual updates to software because of security alerts sent to e-mail lists. Now it’s all automated, with nice alerts when you login that tell you it’s time to upgrade such-and-such. Since I’d been spending the past five or six years looking at the web pages and FTP sites for hundreds of programs to see if there were updates, it was very tempting to be lazy and let someone else worry about that for me.

Well, I finally gave in and fired up a copy of Kubuntu to give it a test drive. The installer was very simple, asking just a handful of questions before doing its thing and giving me a nice desktop. The package manager was easy to use (although I had to learn a few new commands) and the updater is awesome, giving me an unobtrusive icon to let me know it’s time to get some new goodies. Here’s a list of today’s updates: 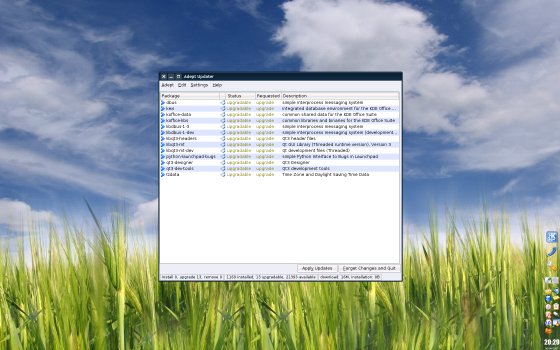 After a few weeks I decided to see if Kubuntu could do what I really need– not only the nice slick KDE desktop I’ve been enjoying for years, but also the heavy-duty server environment necessary to run the hundreds of web sites and thousands of e-mail accounts I manage in my business. It took a few more weeks to configure everything just right, but I managed to get Kubuntu looking and acting just like my traditional Jinux systems. I’m one of those guys who has serious customizations for everything I do: years upon years of shell aliases and desktop preferences and icons and backgrounds and everything else that makes up a computing environment. I didn’t want to lose any of that, and in the end I didn’t need to.

All in all the transition was successful, and I’ve been happily using Kubuntu for about a month. I still run Jinux on my servers– the next big step is converting all of them. It’s no small task to rebuild servers in a production environment without losing any data, dropping a web site or e-mail offline for even a few minutes, and having it all completely transparent to my customers. But I think it can be done, and all that remains is working out the details.

So to the folks over at Ubuntu, here’s a big thanks from a happy customer. It’s sad in a way to bid farewell to my home-grown solution that’s served me so well for all these years, but times change. I can still smile in a smug sort of way knowing that I haven’t used a Windows computer for at least a month now. Who says Linux isn’t ready for the big time?