It’s rare that I finish an entire book in a single sitting. But I just did: I picked up Ron Paul’s The Revolution and started reading it, and was so enthralled that I blew through all 180 pages in one shot. 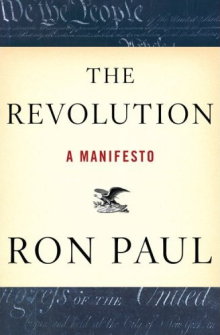 My political views are very much in the Libertarian camp, with some mixings of Constitutionalism. I seldom find anyone with whom I agree completely in politics. Even Laralee and I have our differences, although luckily she’s not a staunch Republican or Democrat. But reading Ron Paul’s book, I found that I agree with him on nearly every level, in every point he makes and every example he cites. His book is powerful, and it should be recommended reading for anyone who is watching what our nation is becoming and doesn’t like it.

When pollsters have shown up at my door, or called me on the phone, these past few weeks to ask who I’m going to vote for in the November presidential election, it’s always fun to tell them “Ron Paul”. They’re flustered because he’s not one of the choices: there are only two choices, right? The black guy and the old guy?

And despite the fact that Ron has withdrawn from the presidential race, I’m going to vote for him anyway. I suspect I’ll be joined by a million others who supported him in his unusual– but very eye-opening– bid for the presidency last year. There are a lot of people who resonate with what he’s proposing, and quite honestly it’s been a long time since I’ve agreed so wholeheartedly with what a politician is spouting.

Read the book. Vote for him. Join the revolution.