I was at the bank yesterday depositing a check and I noticed they had a poster advertising a free iPod Shuffle if you open a new account. Since I already have an account, I asked if opening a second account would qualify, and was told that it would. I was in a hurry, so I left and went back this morning when I had a little more time.

After about ten minutes of paperwork, I had my new Shuffle in hand (they only had silver left– I guess it’s a pretty popular promotion). Woo hoo! 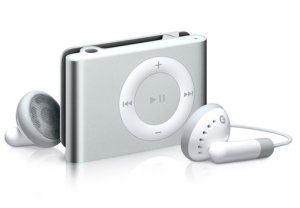 Now I’m loading it up with music, but unfortunately the third-generation Shuffles have some trouble running on a Linux system out of the box. I have to erase the partition table on the internal flash drive, then stick it into a Windows computer running iTunes. The iTunes software recognizes that it’s an iPod and also that the disk is horked, so it kindly offers to reformat the Shuffle properly. After that I can plug it into my Linux box and everything is great.

While going through all of this, I was struck by how downright ugly iTunes is. Here’s the default window on my Windows system: 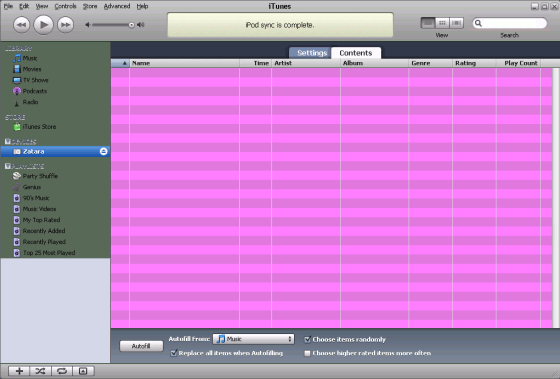 What’s with the olive green and pink/purple colors? It looks like someone ate a box of crayons and threw up on the screen. The left-hand links aren’t very intuitive– it’s not clear how I can take a song from my collection and put it on the iPod. I poked around the menus and it seemed like they were organized randomly, without much helpful information. Clicking About iTunes opened up Word to display a document… huh? And the interface itself doesn’t follow Windows standards; obviously the people at Apple who wrote it wanted it to look Mac-like, but the result is something that’s inconsistent with both Windows and the Mac. It’s sort of a pathetic hybrid of the two.

So I guess I won’t be using iTunes any time soon.

Perhaps the software looks nicer on a Mac; I didn’t give it a go because on the Mac the Shuffle will be formatted with Apple’s HFS filesystem which is much more work under Linux than the Windows FAT32 setup. A Windows-formatted iPod will work in Windows, Mac, and Linux, while a Mac-formatted one will only work on a Mac. Strange design decision.

Anyway, then I plugged the little silver guy into my Linux box and fired up AmaroK. 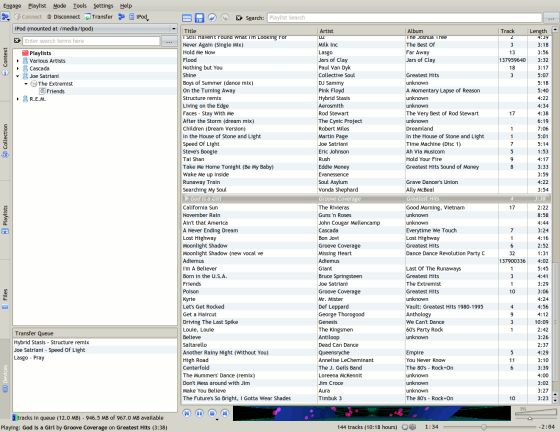 I was rewarded with the nice KDE-based interface and the simple commands, including buttons that say exactly what they do (“Connect”, “Transfer”, etc.) and the ability to simply drag songs to and from the iPod. No pesky automatic re-synching which accidentally deletes your music collection, no olive green and hot pink.

Apple might have done a wonderful job on the iPod hardware, but their software falls way short.