A few weeks ago I had a million-dollar idea.

I love Mario Kart on the Wii. It’s hands-down the most fun video game I’ve played in a decade, and the whole fam gets in on the action. The only problem is there are only thirty-two race courses, and after a few months of playing you get to know the courses pretty well and have a nagging need to drive on something different.

I don’t know how much planning and programming goes into creating a race course for a game like this, but I would think Nintendo could put together a team of a handful of programmers and have them crank out a new course every month or so. Heck, they could probably do it in their spare time if the game engine is built right.

The Wii has a network connection and can jump onto the internet (so you can play other Mario Kart fanatics around the world), so Nintendo would then make these add-on courses available for purchase and download over the net. Say they charge five bucks, or even a dollar, to get these courses. With a million players out there like me, all willing to pay a buck to get something new, Nintendo just made a cool million. Certainly that would pay for the development time for the course!

As a bonus, allow people to download new characters and vehicles for free.

Repeat monthly or whatever, and you’ve got a sweet revenue stream. You keep your players happy, rake in the dough, and expand the game into something much bigger than what you can pack on a single DVD game disc.

How about them apples, Nintendo? 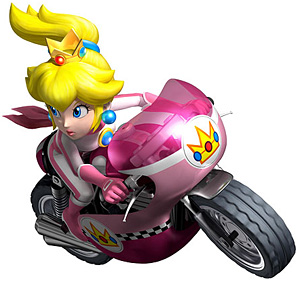