Last week I was kind of bored so I decided to get back into computer gaming. I’m hardly a big-time “gamer” and in fact I probably only get this urge about once every six months. But I figured this might be a good opportunity to involve Alex and perhaps Zack in some fun “guy stuff”.

Age of Empires is really cool, but doesn’t work very well under Linux (and I don’t have any Windows computers). Space Empires IV is a classic but I’ve played it so many times it’s not really even a challenge– and more than likely it would be a little too complicated for the boys. So I poked around for some native Linux games. There are a ton of first-person shooters, but they’re usually pretty violent and we’ve already outlawed Halo in our house because of that.

I discovered Warzone 2100 which is a sweet real-time strategy game. It takes place in the future on a nuclear-ravaged earth, and the objective is to research technologies and build tanks and cyborgs and so forth to take over the world. Everything is done in beautiful 3D, with textures and sweet sound effects and lots of action. 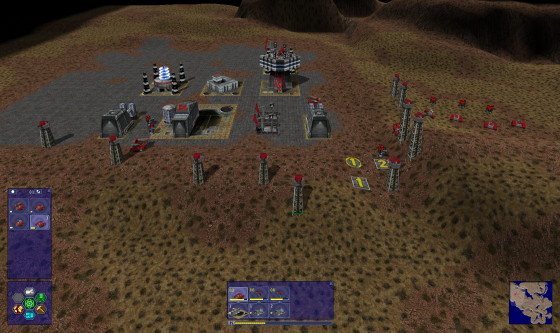 Alex absolutely loves the game, and we’ve played a few missions and skirmishes against the AI. Right now Zack is content to just watch and comment on the battles (“Alex, Dad has ten tanks and he’s blowing up the bad guy base!”). I’m sure he’ll get involved soon, and we’ll have three computers running a networked game.

What a great way to waste some time!