Friday night we had our annual S’mores Night in the backyard. Basically we borrow a portable fire pit from some neighbors, and invite the whole block (27 houses, around a hundred people). Not surprisingly, the same group of maybe thirty people show up every year.

There was a twist this year: our newest neighbors (right next door) have their own fire pit, a trampoline, and three little kids. Since there’s no fence between our yards, it made the party even more fun because we had two trampolines, about fifteen screaming kids bouncing and chasing each other, and the two fire pits with roaring flames. The adults sat around talking and enjoying the beautiful evening and occasionally telling kids to stop throwing things into the fire, and that five marshmallows at a time was maybe too many. Oh, and when it was fully dark and the neighbors brought out the strobe light and shone it on the trampoline, the kids really started having fun. It was hilarious to watch.

The party lasted around three hours– finally around ten o’clock we decided it was time to wind down the hyperactive kids. As it turned out, our kids had invited several of their friends to sleep over for the night, so we all moved inside and ended up with five surprise guests that night. Everything worked out, though, and I think we can consider it another rousing success.

Now we have some leftover s’mores material: a bag of marshmallows, a dozen Hershey bars, and a few boxes of graham crackers. So in the evenings I’ve been making my high-tech s’mores in the microwave: 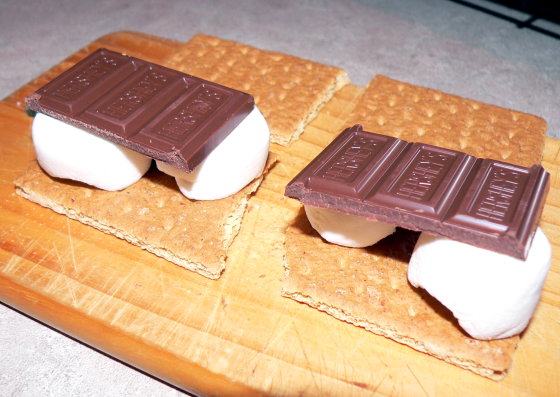 A carefully-prepared cracker, with the microwave set to 1:40 at power 4, and voila, I have an awesome mess of warm white and brown sugary glop oozing out from between the crackers. Whee!