Around 2001 I bought an HP 4550 color laser printer. This thing was the bomb. It was mammoth– tipping the scales at around 150 pounds– and it had all the bells and whistles you could want. It cost something like $2,500 and I invested another $400 in a duplexer. It was a real workhorse, serving me well for many years. But over time technology progressed and it became a bit of a dinosaur. The biggest problem was the consumables: toner cartridges (there are four) cost about a hundred bucks apiece, and the drum (which finally gave out) is another two hundred.

So instead of spending $600 to renew all of the guts of the HP, I ended up buying another color laser printer from Samsung. I think it cost $300.

Anyway, for about five years this behemoth has sat in my office, completely unused. 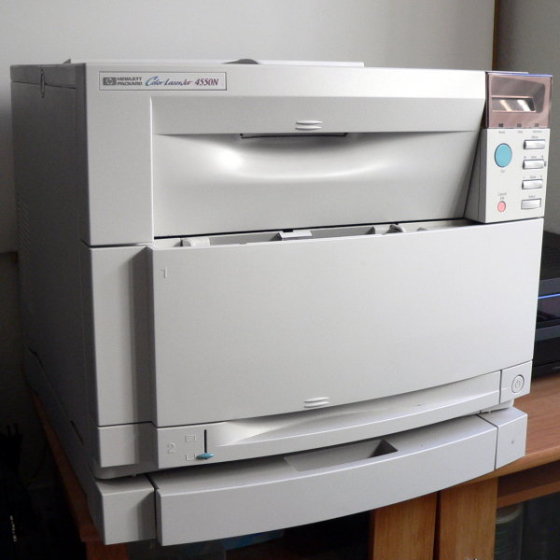 I finally decided it’s time to part company, so I listed it on Craigslist: free to anyone willing to come over here and help me haul it out of the basement. I don’t know if I’ll get any takers, and if I don’t I’m going to switch to Plan B, which is to launch it out of my second-story bedroom window onto the driveway just to see what happens.

Actually that was Plan A, but Laralee said it would be wasteful and setting a bad example for the kids. So I’ll see if I can pass it off to someone who wants it first…