Yesterday we went over to the Painters’ house– our neighbors– for the first annual Jell-o Fest. Kyra and Hannah came up with the idea of having a party centered on Jell-o, including a mysterious prize for the most original Jell-o creation. 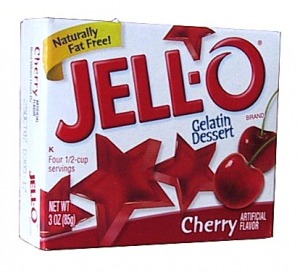 I had a great idea about creating a fully functioning checkers game out of Jell-o. In theory it was pretty simple: make four shallow pans of the stuff in four different colors, then cut squares from two of them and circles from the other two. Arrange the squares in an 8×8 grid for the board, then stack the circles on the board as checkers pieces.

Unfortunately the reality isn’t so easy. Jell-o is very sticky once it’s in the pan (or whatever container it’s made in) and very thin Jell-o is hard to work with. In the end we made a bunch of Jell-o “coins” in mini muffin pans, and even those were hard to peel out of the pans.

Although Kyra and Hannah were a bit disappointed that the entire neighborhood didn’t show up (they’d invited every house on the block), it was still fun. Maybe next year we’ll figure out how to work with Jell-o a bit better.