There was a time, back in the 80’s, when the word “awesome” was commonplace. It was used to describe things that were, well, awesome. We also had words like “dude” and “man”, but that’s not the point of this particular post.

Then, sometime in the 90’s, the word “awesome” faded from the common vernacular. People stopped using it, and the world seemed a little more dreary. But I continued to use it. Awesome is a useful word, and one that makes whatever you’re talking about just a little more exciting and interesting. It’s just such a positive word.

In the early 2000’s, a friend of mine commented that she never heard the word “awesome” any more, except from me. She thought it was quaint, I suppose.

Then, suddenly, in the last few years the word has popped up again and suddenly everyone is using it. I just downloaded the Chrome browser from Google’s web site, and the thank-you message was You’re awesome. Thanks for downloading Google Chrome. Seriously.

Now everyone says “awesome” and I sound like just a guy who’s riding with the crowd. But I want it to be known that I never gave up on that word. I stuck with it through lean times. I described awesome things as awesome, the way they should be.

So all you guys who think it’s hip to say “awesome” again, good for you. I’m glad that word is back in daily use, and I think every time we hear it, the world is just a little bit brighter because “awesome” is nothing but positive. 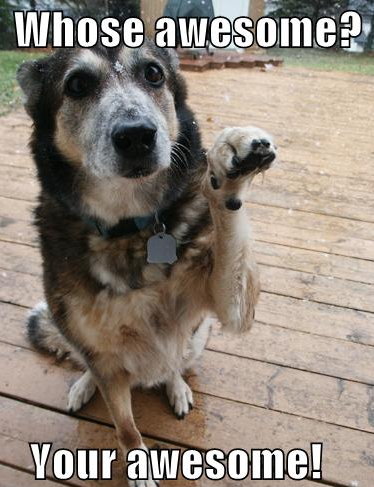