I saw an article the other day about WindowMaker, which is the desktop windowing system I used for many years back when I worked at Raytheon. I had been using CDE in college, and then at Raytheon I had a bunch of massive SGI workstations running IRIX, so I first used CDE but switched to WindowMaker because it seemed to have more customizations and just a nicer “feel”.

WindowMaker has been sitting idle for probably a decade, and finally some developers who like it decided to start working on it again. So the article I read was an announcement that a new version had just been released. It’s still the same window manager at heart, but they’re actively working on adding new features. Funny that after all this time the project has been resurrected.

Since I’m using Jinux now, it was a simple matter to download the source code for WindowMaker and compile it. It literally took about two minutes (compared with two hours for KDE). I installed it and fired it up. 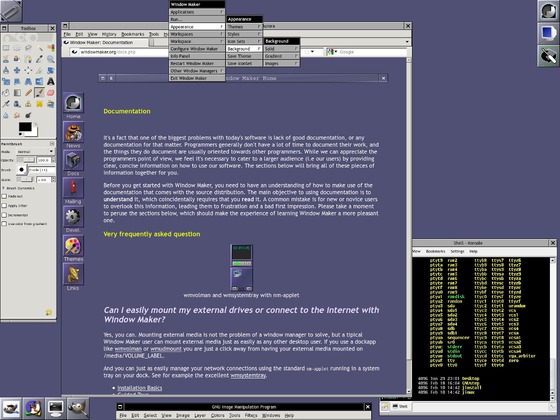 It worked right out of the gate. Awesome. All of the old familiar “dock icons” were there, along with support for multiple workspaces, custom themes and docs, and of course the default purple-grey background. Keep in mind that in those days, when I was using WindowMaker as my main windowing system, it was around 1996. Windows 95 was the king of the hill. It didn’t do any of the cool things that WindowMaker could do. Even today Windows doesn’t have support for multiple desktops (as far as I know).

Of course I’m still a KDE fanboy so it’s not like I’m going to switch back to WindowMaker as my main desktop environment. But it was kind of fun to grab source code and within a few minutes have that old familiar desktop in front of me. A geeky happy birthday to me.