I was working late this evening, as usual, and when I finished up I was poking around the internet a bit. I found a site I’d bookmarked long ago and checked to see if it was still there. Sure enough. It has hundreds of old Apple II games… the games that were on 5.25″ floppy disks. Classics that I played as a kid, like Lode Runner, Taipan, Night Mission Pinball, and of course Thom’s favorite, Black Magic.

I downloaded the disk images and the emulator necessary to run it. Reading some documentation, it seems like the emulator has even been ported to iOS so you can run these classic games on your iPhone or iPad. Since I have neither, I had to figure out how to run it under Linux. There’s a Windows version of the emulator, and of course it’s possible to run (some) Windows programs on a Linux system using Wine.

Off I went. I downloaded the latest source code for Wine and compiled it, then installed it on my desktop. The games sort of worked– Lode Runner came up in all it’s two-color glory, but the keyboard wasn’t working quite right. And yes, I actually still remember the keys to move the guy in Lode Runner!

I wondered if maybe Wine was the problem, so I looked for some old Windows programs to see if I could run them. I chuckled when I found an old copy of Netscape 4.8. I have newer versions, of course, but it seems like testing something from the mid-90’s would be a great idea. I ran the installer and voila! there it was: Netscape 4.8, running beautifully on my KDE Linux desktop.

Just for kicks I went to this blog site. Wow, it works! 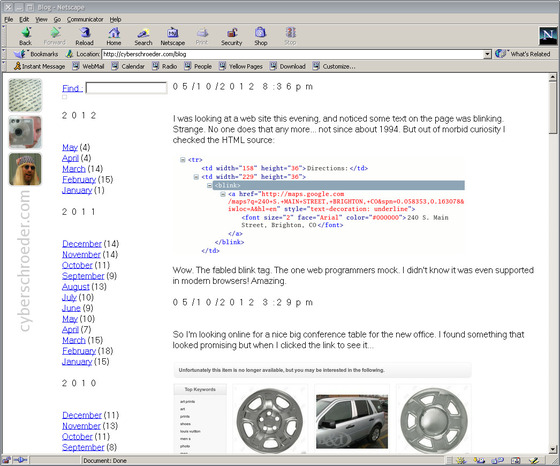 The font styling leaves something to be desired (I think this version of Netscape was before CSS really existed) but hey, it’s not too shabby. It probably helps that I wrote the code for this blog a long time ago and it’s not using a lot of the CSS tricks that “modern” sites use.

It’s funny to remember those fond days of using Netscape Mail. Now if I can figure out what’s going on with the Apple II emulator, I can remember the even fonder days of Lode Runner…