Yesterday I downloaded and installed a new game for Linux– I’m always on the lookout because Alex and Kyra have a Linux computer and they like new games. It’s called Armagetron, which basically means it’s the light-cycle game from the movie “Tron”. But rather than the typical lots-of-colored-lines version, this is a fully three-dimensional game, where the viewpoint follows the light-cycles and can be adjusted through three dimensions. The sound is sweet, because it uses volume changes and even Doppler shifting to simulate the light-cycles whizzing past each other.

Although it will only run on my computer (theirs doesn’t have a 3D accelerated graphics card), they were thrilled to sit and watch me play for a good half hour. Then Laralee got in on the action, and she and I played a team game where it was us against the AI… with split-screen display. Sweet.

Who says free can’t be good? 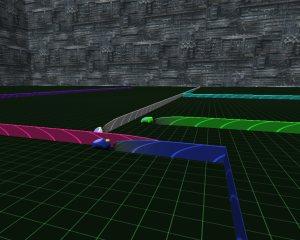