Today was moving day! After months of planning and preparation, followed by a frantic series of contractors coming and going, it was time to head to the new office.

We packed up everything in the old office except a few desks no one wanted. It looked like kind of a mess when we walked out… 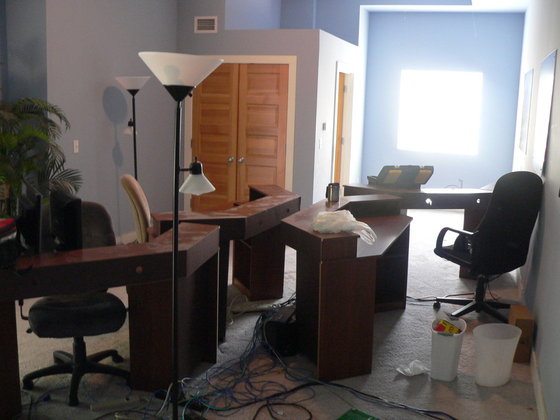 I really like that office and it’s served us well for over five years, but it was time to move on.

We hauled everything in our Odyssey, Josh’s Element, and Steven’s F-150. It only took two trips, which was nice. Earlier in the day I’d helped the FedEx guy unload my new desk, and when our conference table arrived the shipping company uncermoniously plopped it on a pallet in the parking lot and drove off. So we all hauled those pieces upstairs as well.

Here’s the conference area, filled with flotsam and jetsam. The foosball table is standing on end, with our huge new 6×4′ whiteboard (still in its box) leaning against the far wall. 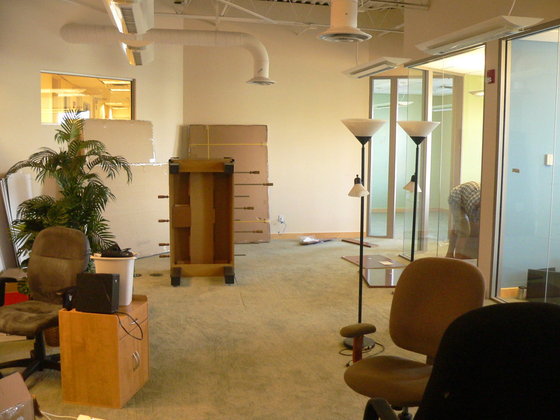 We spent the late afternoon and early evening building new desks, constructing the conference table, and arranging our offices. A few of the guys had to head home after a long day, but Brian, Josh, and Dustin stayed behind so we could clean up the detritus and avoid coming into work tomorrow and seeing a mess.

The three of them are discussing possible places for the foosball table in relation to the upcoming ping-pong table. It’s hard to truly appreciate the massive conference table behind Josh… it’s twelve feet long and weighs something like 600 pounds. 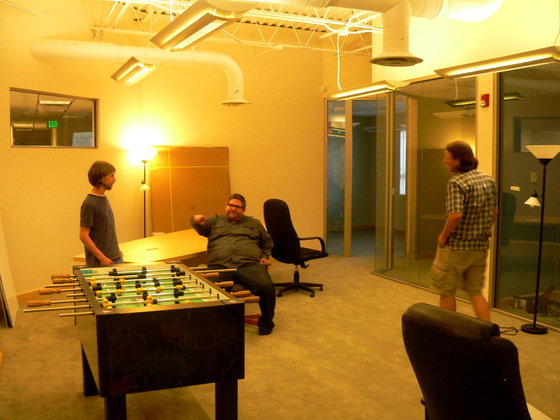 It was hard to take pictures because it was dark– we were there until almost 9:30 (thanks guys!). But at the end of a long day, I went home excited. This new office rocks. It seems like everyone else is pumped, too. We’re definitely moving up in the world.