Sometimes it seems like being a researcher could be a lot of fun.

Take today’s announcement from a group of scientists at Princeton: they recently completed experiments that show the “packing density” of M&M candy is higher than that of similarly-sized spheres (in this case, small ball bearings).

Imagine, first, the guy who thought up this experiment. You can almost picture a group of white-coated guys lounging around the lab, just having finished their latest foray into nuclear physics or something, tossing down some M&M’s and Pepsi. One of them– probably the one drinking Bud instead of Pepsi– suddenly laughs and says, “You know, I wonder how many M&M’s would fit into this keg.”

From there the experiment is born, and they spend weeks filling containers with M&M’s and ball bearings, counting them, eating them (the M&M’s, not the ball bearings), and scratching everything down on graph paper. They know they’ll never get published if they describe such an experiment, so they decide to– get this– create a computer simulation of a keg filled with M&M’s.

Then, after they’ve finished all the experiments and computer runs, they need to somehow justify this whole project. So they come up with a justification; in the words of one article, “The scientists say their work is important to anyone involved in the study of particle packing.”

Thank goodness those particle-packing people will have this landmark new research! 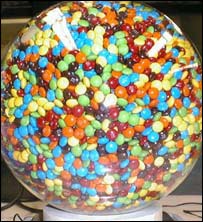 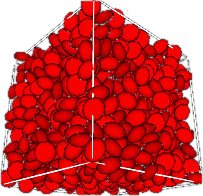