Every fall, Thom and I take a trip to… somewhere. This year we decided to head to Utah for a few days in Bryce Canyon and Zion National Park. One of the goals of these trips is to do some nature photography, so of course Thom packs whatever his latest camera toys happen to be. I recently bought a new Canon point-and-shoot camera which has twice the resolution of my Panasonic (12Mpx vs 3Mpx). So I decided to take the easy road, just to find out whether this little $130 gem will give me some decent pictures. I’m no professional, after all.

He flew in from Seattle Tuesday night and we hit the road Wednesday morning. We were hoping to catch some nice fall colors, and driving west on I-70 through the mountain passes, we were rewarded with a few splashes of yellow aspen against the evergreens. Here’s a fancy one-handed shot I took out the window as I was driving: 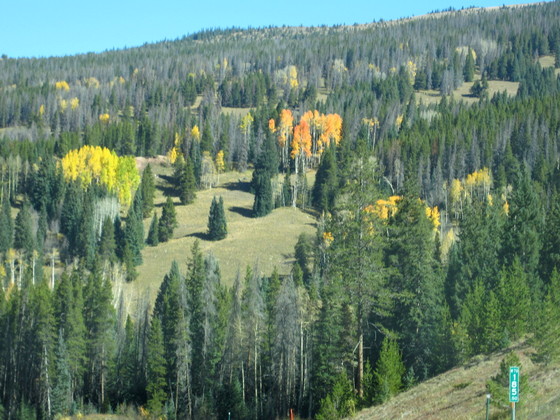 In central Utah, I-70 bisects the San Rafael Swells– a really cool area with a lot of uplifted rock and interesting geography. We spent some time there a few years ago, but this time we just blew through it. We stopped at a lookout over Black Dragon Canyon, where Thom modeled some funky new hairstyle: 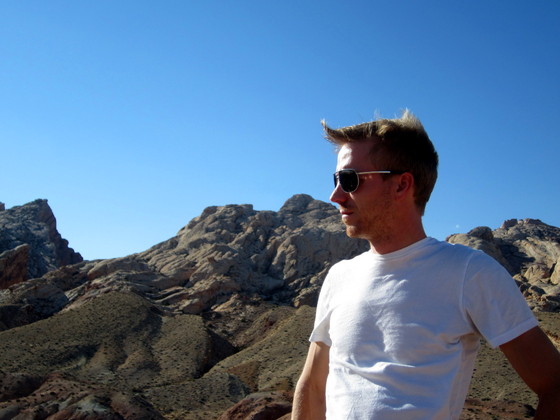 We noticed a couple of truckers had stopped, and one of them took a picture of the other leaning against the truck. Since it seemed like such a good idea, Thom did the same. It’s a nice casual look. 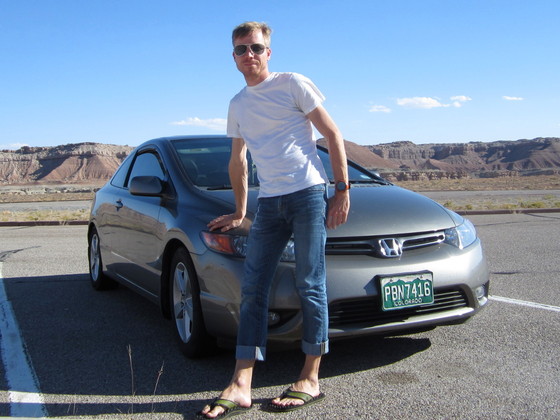 As we continued west, there were some cool landscapes. I grabbed the camera and took another 70mph photo out of the side window, this time of some nice haze effects on the distant mesas: 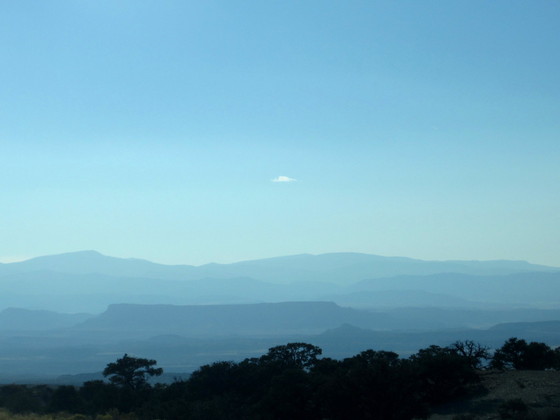 We arrived at Bryce Canyon around 9pm, thinking we could find a drive-in campsite pretty easily. Not so. We figured October was pretty late in the season for vacations, but apparently it’s not. The campsites were full, and we were lucky to score one of the last three remaining (of several hundred). We set up camp, and in the morning went to Sunrise Point to catch the early light on the rocks. 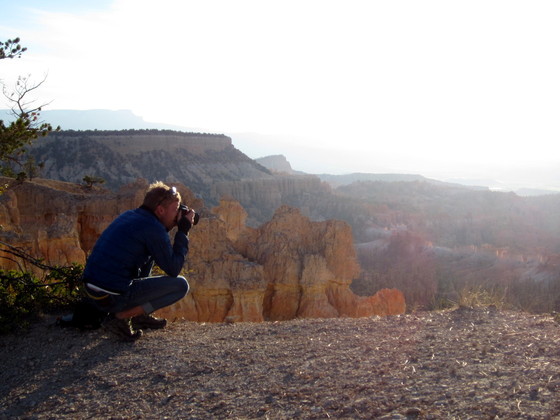 Here’s a nice formation with the sun rising behind it: 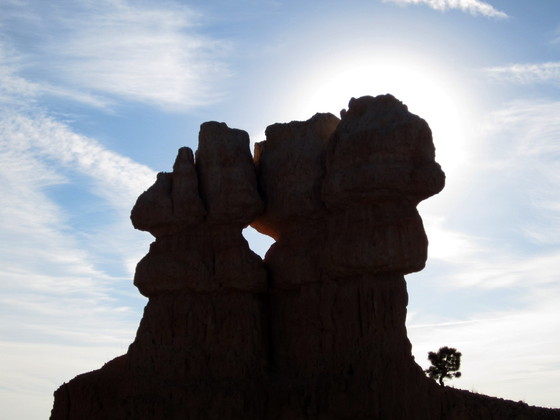 Bryce is famous for its towering rock formations, which are called “hoodoos”. They’re quite fascinating, until you realize there are approximately sixteen billion of them and after a while they all start to look alike. But hey, there’s still something cool about them: 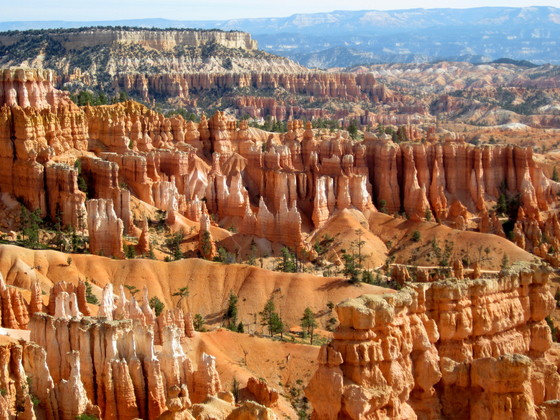 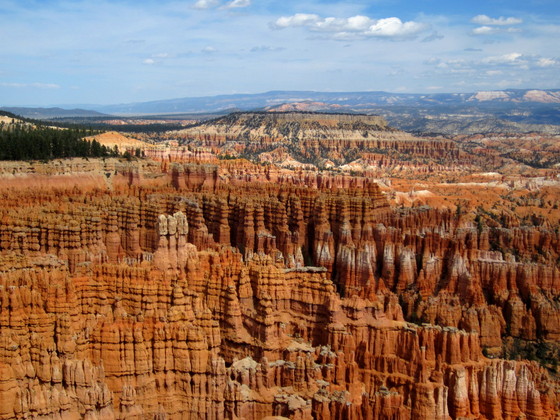 My camera has a mode called “miniature” which applies some blurring to the top and bottom of the photo, then adjusts the saturation a bit, in order to make the subject of the picture appear to be a tiny model. It was pretty funny to see the results on the hoodoos: 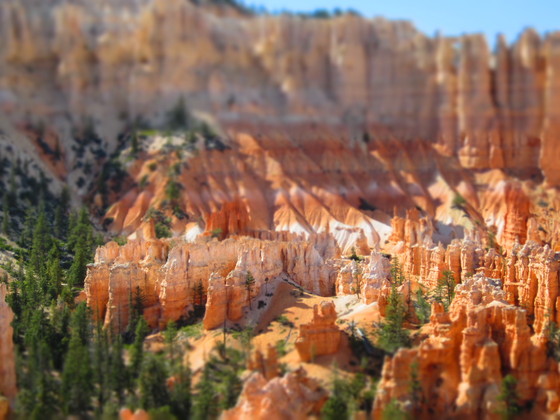 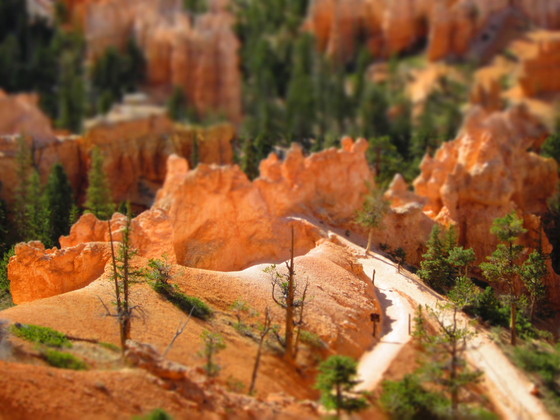 We took several trails along the rim and down into the canyon, and really enjoyed the scenery. Like the Grand Canyon, I think it’s hard to truly appreciate all of the geography without descending into the canyon. After hiking most of the day, we decided we’d seen enough hoodoos to last a while, so instead of camping at Bryce for the night we headed down to Zion so we could spend more time there.

When we arrived, we found a similar camping situation: all of the campsites in Zion were full. We went to the neighboring town of Springdale and found a place called the “Quality Inn / RV Park”. They happened to have a couple of campsites, so once again we snagged what we could and set up camp in the dark. We agreed it was hands-down the worst campsite we’ve ever stayed in; here’s a photo from the next morning: 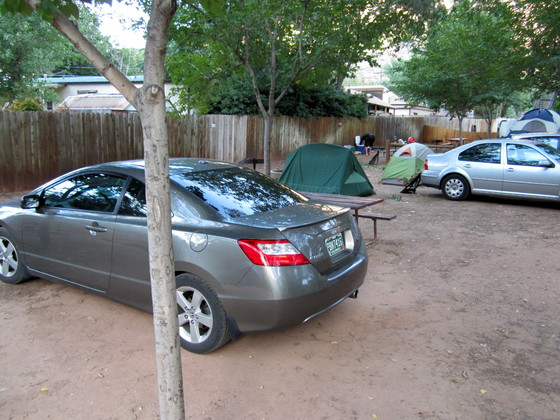 Yes, each of the several hundred sites was a flat patch of dirt about twenty feet square, with a residential area just behind the fence and the Quality Inn people looking down from their windows in the hotel above. Classy.

That night, as I was taking out my contacts, I dropped one of them and lost it. I looked for at least thirty minutes, and Thom was a sport and helped as best he could. It was to no avail; the lens was gone. I had my glasses– usually I wear them at night anyway– so I weighed whether I should spend the rest of the trip wearing them or figure out a way to get a replacement contact. Ugh.

The next morning dawned and I made some calls, finally setting up an appointment at the Walmart vision center in St. George. I had to get a full exam in order to pick up new contact lenses, but it seemed better than the alternative of hiking and driving with glasses. Resigned to this lame turn of events, we hopped a shuttle to ride up the canyon. It was a beautiful fall day: about 60 degrees, sunny, with a crystal blue sky. Now I understand why October is hardly the “slow time” at Bryce and Zion! 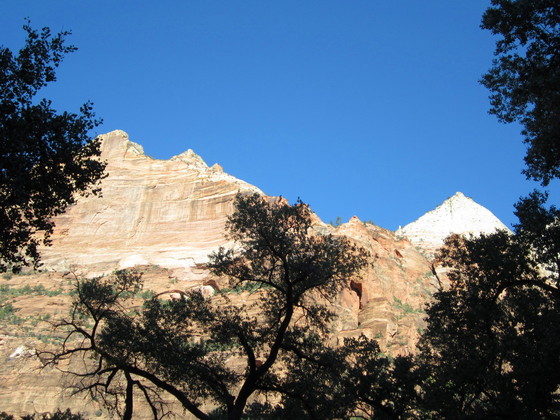 We hiked up the trail to Angel’s Landing, which has a considerable elevation gain and offers some amazing views of the canyon. This hardly does it justice. 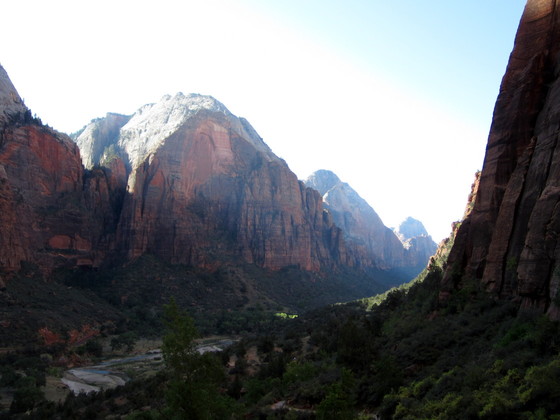 We made it to the final stretch before the precarious climb to the very top of Angel’s Landing (the scary part which the tour bus drivers warn is the source of fatalities). We could have finished the hike in maybe half an hour, but had to turn around for me to make it to my eye appointment. It was a real bummer… I definitely want to finish this trail the next time I’m in the area.

Thom stayed in the park to work on some photography while I drove southwest to St. George, about 45 minutes away. There I was able to get a new pair of contacts which (not surprisingly) were the exact same prescription as my old ones. The view here wasn’t quite as stunning as the trail I’d just been on: 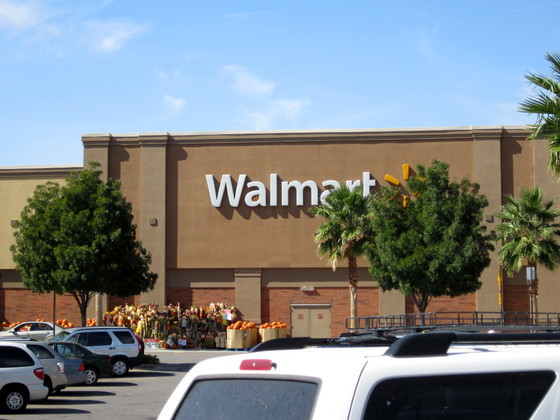 I was back in Zion about two hours after leaving, so I rejoined Thom and we went back up the canyon to the famous Narrows area. This hike was unlike anything I’d done before: basically you wade upstream through the river. 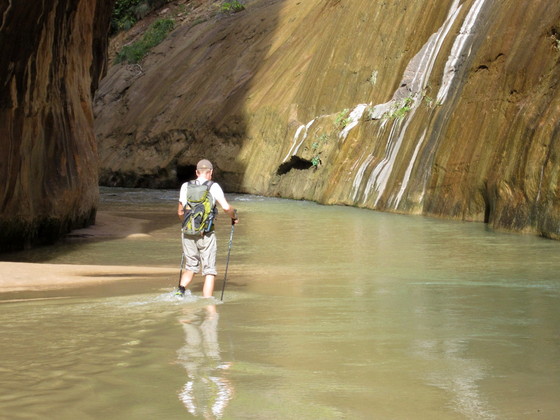 As we continued up the canyon, the sheer rock walls grew higher and the river grew narrower. The result was amazing, and at the narrowest point we reached the walls were about twenty feet apart and a thousand feet high. It was noticeably darker in there, and my camera couldn’t take pictures without blurring. Here are a few shots from the journey upriver: 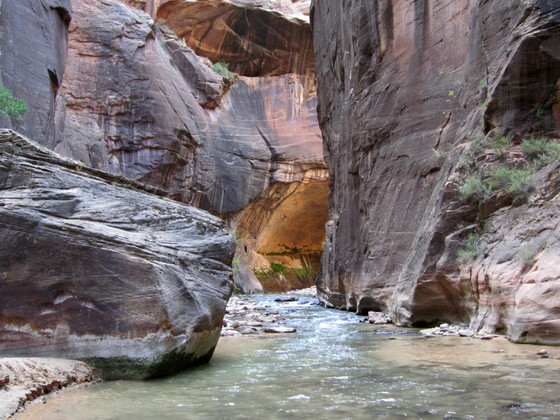 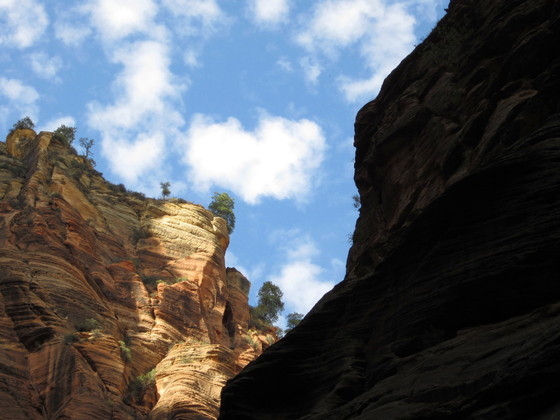 Most of the shoreline is sand, and the rocks are all smooth and rounded from the river erosion. I was wearing an old pair of tennis shoes, and they were giving me a terrible blister on my rightmost toe. Finally I just took them off, and hiked the canyon barefoot. 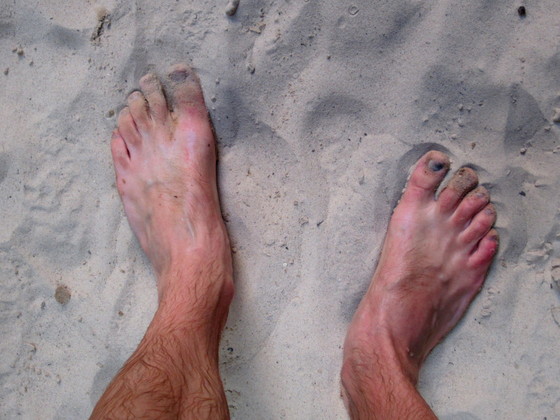 All told, Thom and I think we did about three miles up the canyon and three miles back. Of that, I probably did five of those miles barefoot. I’ve never hiked that way before, but it was pretty cool.

After we came out of the Narrows, the sun was setting and it got dark pretty fast. We drove to St. George for dinner, where I had my first experience at In-N-Out Burger. 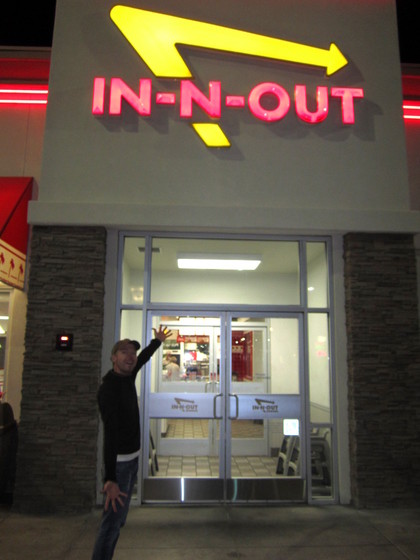 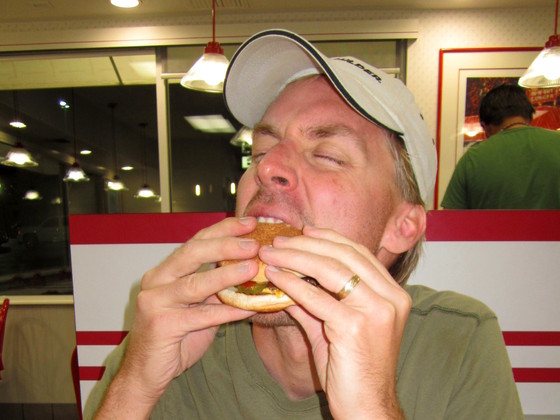 Thom made it sound like eating a burger at this legendary restaurant would be the culinary equivalent of having angels dance on my tongue while harps played in the distance. In fact, it was very much like Steak ‘n Shake or Freddy’s… a five-dollar burger that made me say, “meh”. But at least I can check it off my bucket list now.

We stayed the night with my niece Tara and her family; coincidentally her two brothers also showed up (from the Salt Lake City area) and we had a bit of a family reunion. Thom probably felt a little out of sorts with a dozen people he didn’t really know, but we had a great time and appreciated an actual shower and bed after a few days in the wilderness.

On Saturday it was time to head back home, so we started the long trip back to Longmont but elected to take the scenic route through southern Colorado, rather than the shorter route along I-70. Along the way we passed Glen Canyon Dam, which is an impressive engineering feat and in Thom’s words, “a lot of concrete”. 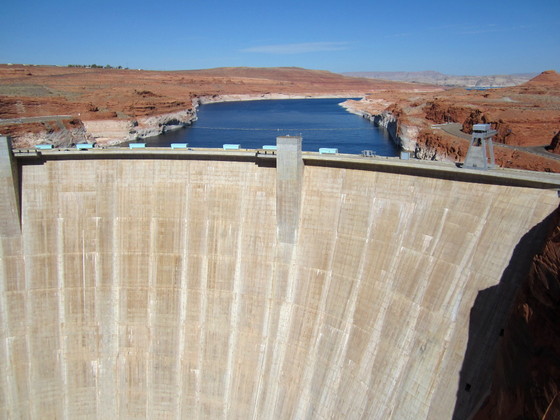 We drove through the northern edge of Arizona for a while, then popped into New Mexico for literally about thirty seconds (skirting the Four Corners area), and cruised up into southwest Colorado. The drive had some interesting scenery, but also had a whole lot of nothing. 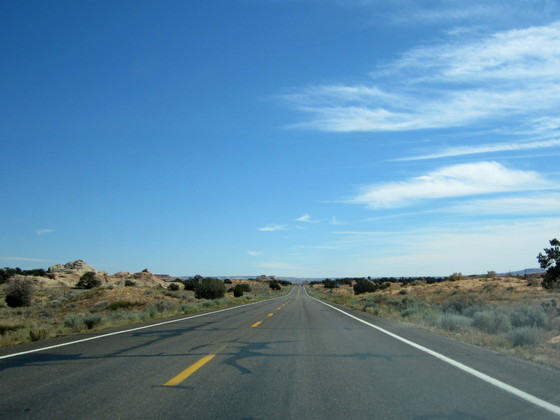 Some would say it’s still better than Kansas.

Durango was our destination for the evening, and we hit town around 5:00. As it turned out, all of the campsites in the area (yes, all of them) are closed for the season. So much for planning. We ended up crashing in a little hotel called Wapiti Lodge, whose slogan is (no kidding) “The best hotel for 150 feet”. Next door is a massive Marriott.

We felt like a local pizza joint would be a good choice for dinner, so based on an amazing online review we headed to Home Slice Pizza, which is literally in a converted house in a residential area of town. 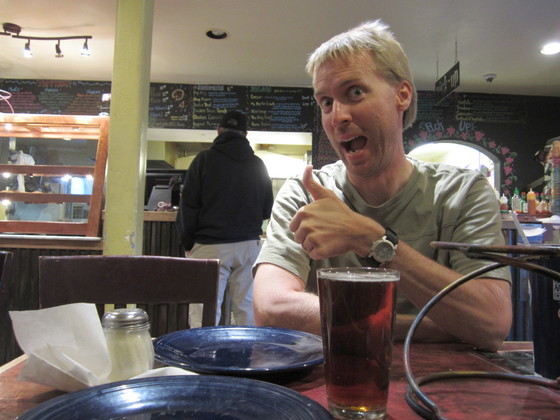 Caveat: that’s not my beer in the picture.

We finished off the evening with a stop at Dairy Queen and a couple of sundaes. 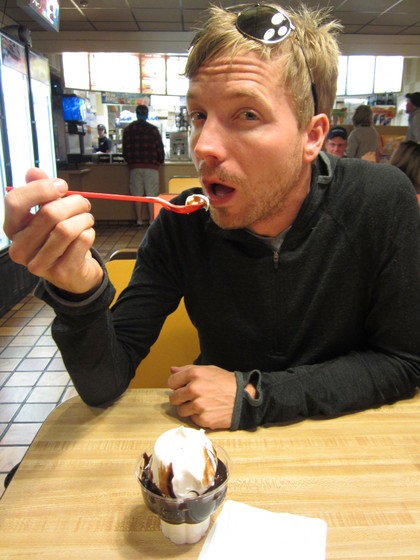 Now we’re in the hotel room, where I’m writing this travelogue. Tomorrow is the last day of the trip, when we plan to head northeast through some of the prettiest parts of the state. It’s been a great time (as always).