Back in college, Mel and I would often spend late nights working on puzzles in her apartment. She seemed to have an unending supply of big, complicated ones: 1,500 pieces or so. They would usually take several weeks to put together, and while we worked on them it was a great opportunity to just talk and enjoy each other’s company.

Shortly after college, she gave me a gift of two huge puzzles: one for Star Wars and another for The Empire Strikes Back. I thought they were really cool, but somehow I never found the time to get them out and work on them. Life seemed busy at work, then I got married, had kids, and… well, the years passed.

A few months ago Laralee pulled out some old puzzles from the closet and worked on them for ten minutes here, twenty minutes there during her days. The kids would often help, and I’d saunter over and pop in a few pieces as well. It was fun. But these were rather simple puzzles: 750 pieces, all the same shape, yada yada.

She noticed the two unopened puzzles from Mel gathering dust on the topmost shelf of the closet and pulled out the Star Wars one. Looking at the pieces, both of us were shocked. There were a lot of them (1,500) and they were absolutely crazy shapes. Like snowflakes, I don’t think any two were the same. Big, small, warped, with lots of black, orange, and purple. Undaunted, she started working on it.

About a month later, she and I finished it. 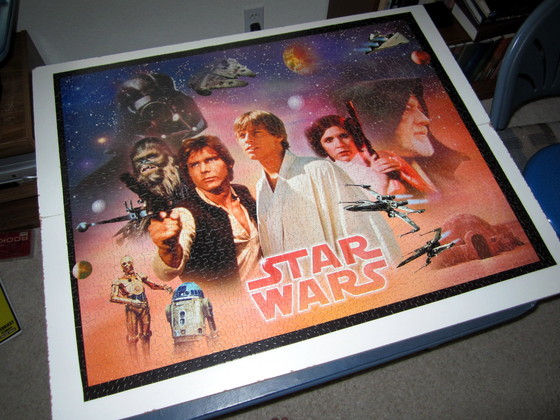 Although she did the bulk of the work, I take credit for Darth Vader, Han Solo, and Obi-Wan. The rest was done through her diligence and patience.

So there you have it: roughly seventeen years after Mel gave me this puzzle, I finally did it. Thanks for many evenings of entertainment, Mel!