There’s a new addition to the Schroeder household… and no, it’s not a baby.

It’s a teensy painted turtle named Spike. He’s about the size of a half-dollar and has a really nifty pattern of orange and green on his belly, although it was hard enough to snap a picture of him right-side up. He’s always zipping around looking for something to do (or, more likely, trying to escape the clutches of Zack– who always wants to pet him).

Alex “inherited” Spike from his teacher Ms. Auer on the last day of school. She had brought him into class for a week or so, and needed to get rid of him at the end of the school year. Alex asked Laralee, who said I was the final authority on the matter. Despite not wanting another pet (two fish is enough for me), Alex pleaded enough that I gave in and agreed to take Spike “for a while”. The deal is that we’ll release him back into the wild after a few months.

In the meantime, he’s living in a Lego box containing a half-inch of water and some rocks. Alex is very good about checking up on him and feeding him his daily worm (yum!). And Zack is always interested in picking him up, petting him, letting him crawl on his arm, et cetera. The other day I caught the kids giving Spike a ride on their little toy fire engine, and had to explain that he really prefers some peace and quiet in his little watery Lego box.

We’ll get a nice aquarium soon, I suppose, and will have to track down some more worms at some point– our Cool Whip container of Dirt ‘N Worms is just about empty. 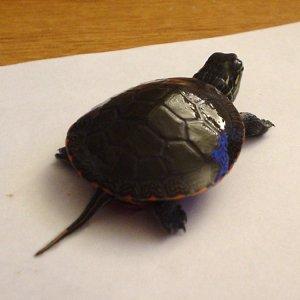