The Chinese government never ceases to amaze me. In today’s news, they’ve announced a plan to filter text messages sent between their citizens via cell phones. This is a monumental task, as Chinese people send and receive more text messages (some 200 billion per year) than the rest of the world combined. Not deterred by the sheer magnitude of such a project, the government thinks it has a right to intercept and block communication between its citizens.

Not surprisingly, this goes hand-in-hand with their stringent filtering of the internet– something I would think is a lost cause. Apparently text messages containing certain key words, or even special numbers in proximity to one another, will be blocked by the filtering software.

Although I feel the Chinese government is monstrous for pulling stunts like this, I’m also constantly appalled by the way the U.S. government– and American corporations– continue to treat China like they’re our best friends. They retain their Most Favored Nation status, and as long as the flow of crappy plastic toys continues to flow across the ocean I’m sure they’ll remain our most beloved trade partners. Oh, and let’s not forget the fact that the next Olympics will be held in Beijing: certainly a demonstration to the world that it doesn’t matter how repressive you are to your own people, as long as you manufacture cheap consumer goods. 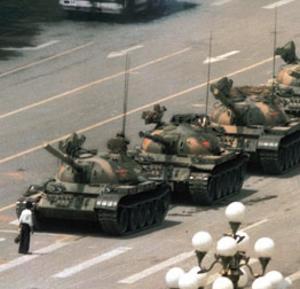