Last week while playing ultimate I suffered a bit of an injury when an opposing player landed with his full weight on the side of my (bare) foot. I heard an audible ‘crack’ and decided to sit out for the point. However, I was back in the game after the point and in fact played the second full game of our double-header. By the end of the night, however, I was limping noticeably since my foot was hurting pretty badly.

The next day I could hardly walk, and I started wondering if there was an actual broken bone somewhere in there. Since my health insurance is limited to catastrophic situations (think $4,000 deductible) it would take a lot to make me plunk down five hundred bucks for an x-ray to see if anything is really wrong. So I decided to limp for a few days.

A week later things were good– my foot still hurt, but I suspect if there was a fracture it would hurt a lot more. Thus, when Wednesday rolled around and it was time for another evening of ultimate, I decided to play. I had originally planned on sitting out most (if not all) of the game, but we were short on men so I needed to do my part. It felt okay playing, but after the game– again– I was reduced to a limp.

Now, today, I’m paying for my earnestness because the foot is definitely in worse shape than it was the same time yesterday. If I was younger, I’m sure it would be fine and I’d be ready for another game. But apparently as one gets older, these things take longer to heal. Dang it. 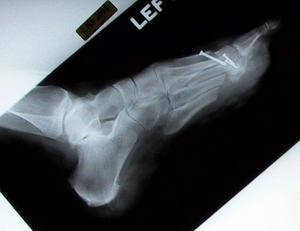